In the Devil's Nebula (Phoenix Adventures #2) 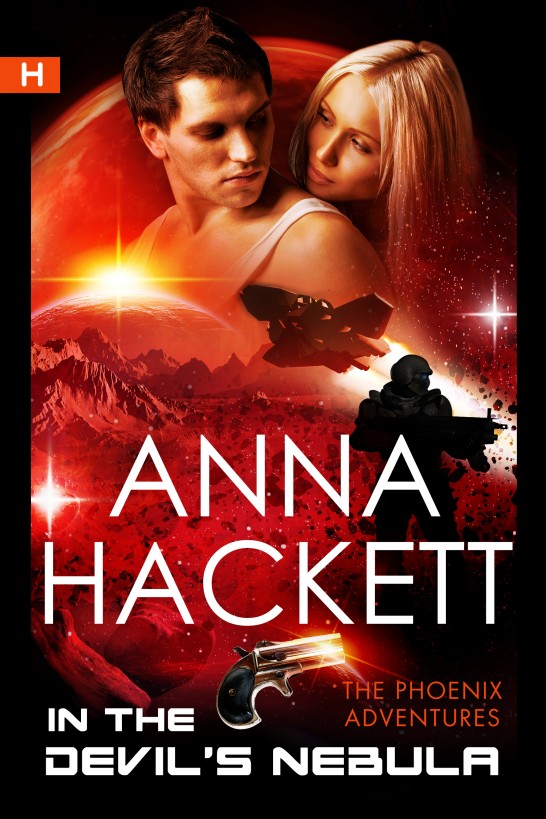 In the Devil’s Nebula
Anna Hackett

In the Devil’s Nebula

This book is a work of fiction. All names,
characters, places and incidents are either the product of the
author’s imagination or are used fictitiously. Any resemblance to
actual persons, events or places is coincidental. No part of this
book may be reproduced, scanned, or distributed in any printed or
electronic form.

What
readers are saying about The Phoenix Adventures

What readers are saying about The Phoenix
Adventures

“
At Star’s End
is
a fun, thrill ride of a science fiction romance…Did I mention how
much I enjoyed the action? Booby trapped rooms protecting
treasures, starship chases, shoot-outs, and giant monsters.” –
Mstcat, Goodreads review

“
At Star’s End
is
a very fast-paced action filled story. It is a thrill to read.” –
Nas, Romance Book Haven

“
At Star’s End
by
Anna Hackett sizzles with tension, action and danger, all while
adding the sparks of a sometimes sweet, but always exciting budding
romance.” – Dii, Top 500 Amazon reviewer

“Science
fiction romance and treasure hunting, so basically we get an
Indiana Jones-Han Solo mash-up with a hot smart chick as the
heroine.” – Marcia, Bookswagger

“I found that
once I started it, I didn’t want to put it down.” - Jen, That’s
What I’m Talking About

Following the recommendation of the Medical
Corps, it is my disappointing task to grant Commander Zayn Phoenix
discharge at his request. He has been an invaluable member of the
Strike Wing under my command. I have watched his natural talent for
piloting develop since his days in the Academy. If there was ever a
man born to be in the Wing and pilot the TH47 Talon, it is
Phoenix.

There is no doubting his skill at the cockpit
controls or his bravery in battle but he has not recovered since
the regrettable incidents on Lucifa in the Devil’s Nebula. I
sincerely hope that civilian life grants him the peace he
seeks.

One wrong touch of the controls and he’d be
dead.

Zayn Phoenix handled the flight-pod’s
controls with the lightest touch. It was experience—years of it—but
also gut instinct and nerves. For him, flying had never been about
pushing button A, or pulling lever B. It was a passion.

Watching the map on the tiny viewscreen, he
saw a turn coming up. He didn’t tense, stayed relaxed, but his
concentration was fierce. Maneuvering a pod barely big enough for
his body through the tight twists and turns of a space station’s
ventilation system wasn’t something he did every day.

He waited, watching the small red blip that
showed his pod’s location on the screen, and when it reached the
right spot, he tilted the tiny joy stick. The pod responded, turned
hard to the left and sped down another vent shaft. His end goal,
marked on the map with a giant blue cross, wasn’t far ahead.

The voice came through his nano-earpiece
loud and sharp. Like his brother was seated right next to him.
Except there wasn’t an inch of space in the pod for Dathan to
squeeze his muscled body in.

“Remember I said I needed complete
concentration while flying this thing?” Zayn muttered.

“I want that crown, Zayn.” The new voice was
a shade deeper than Dathan’s and held its usual serious edge.
“Darc’s been after it for months. I want it.”

“I’ll get your bloody crown. Now, shut up.”
Zayn frowned. His oldest brother Niklas’ obsession with their rival
treasure hunter left Zayn worried. They’d all had their asses
handed to them by the lethal woman numerous times. Nera Darc was
emotionless and deadly. Nik and Darc had a dangerous relationship
of one-upping each other, which was going to get one of them killed
before long. Zayn just wanted to make sure it was Darc, and not Nik
who got hurt.

He turned his focus back to the controls.
They’d been planning this hunt for weeks. Vand Braxx had spent more
than a few nights boasting about his purchase of the Crown of the
Consorts. Old Earth treasure was coveted and valuable. The guy, on
the other hand, was scum. His private space station was a haven for
thieves, thugs and anyone interested in shady activity of the
less-than-legal variety.

The Phoenix brothers, therefore, didn’t feel
an ounce of remorse of relieving him of his latest treasure.

Not that they’d sell it for full price.
Since Dathan had up and married an upstanding astro-archeologist,
they were suddenly donating a lot of the treasure they hunted to
museums. Zayn grinned. They still gladly accepted the finder’s
fees, though. And Zayn quite liked having Eos around. She’d
smoothed out some of Dathan’s ragged edges—he’d had quite a few—and
her insane smarts made planning their hunts a hell of a lot
easier.

Zayn palmed the controls and the pod dipped,
flying downwards through yet another vent. He enjoyed the sensation
of falling.

He’d always loved speed, but in the last few
years, he’d developed an addiction for it.

All too soon, he brought the pod to a
gut-churning stop. “I’m at the location. Exiting pod. Radio silence
’til I’m back.”

The door opened with a hiss. “Thanks, babe.”
Zayn pulled himself out of the pod and stepped onto the metal grate
of a maintenance platform. He glanced upward. The hatch into the
station was eight meters above his head. His boots were made of
synth-leather, silky soft and great for sneaking around. The
magnetic soles were also pretty damn useful.

He pushed one foot against the wall and felt
the snap as the boot stuck to the metal. He walked up the wall and
then went to work on the blinking control lock beside the hatch. A
second later, the hatch opened without a sound.

Zayn climbed through. He was in a bedroom.
It was draped in metallic gold fabric—the walls, the ceiling, the
posts at the corners of a bed large enough for an entire
VelocityBall team.

And in the center of the bed was a woman
with very dangerous curves. Naked curves.

She sensed his presence because she slid
sensuously against the silken sheets and looked over her slim
shoulder. She pushed a tangled cloud of multi-colored hair back.
Her gaze skimmed his tight flight suit, then she shot him a smile
designed to turn a man’s cock hard as space rock.

Zayn loved women. Always had. But this lush
woman left him uncomfortably cold. Instead, the image of a toned,
athletic body and a cap of blonde hair wavered in his vision for
the briefest second.

Mission, Zayn
. He shot the woman a
smile and pressed a finger to his lips. She nodded and gave him her
best come-hither look. He mouthed
later
and crept out of the
room.

Eos’ research had indicated that Braxx’s
harem girls weren’t particularly loyal to the man. He provided them
with luxury but he was cruel and demanding.

Just another good reason to give the man a
huge fuck you. Anyone who hurt women was lower than low.

That include you, Phoenix?

The uncomfortable thought was a kick to his
belly. Zayn gritted his teeth and kept moving.

A few rooms later—all thankfully empty as
planned—he found Braxx’s little throne room. At one end of the
space was a large elaborate chair of twisted metal set on a small
dais. Behind it, a huge window offered a fantastic view of space
and the distant asteroid field that provided the station with
protection. One of those asteroids was also hiding his ship, the
Infinitas
, and his brothers.

Zayn’s gaze moved back to the butt-ugly
chair. Why did these bastards always have thrones? What was wrong
with a good office? Or just a comfy couch? This his gaze zeroed in
on the slim stand spotlighted in the center of the room. He walked
toward it.

Incredible
. In the center of the
pedestal sat the Crown of the Consorts nestled on a bed of blue
velvet. It was made from platinum, set with a sprinkle of diamonds.
Four arms arched up to some sort of cross at the top. But what
stole the show was the huge diamond sitting right in the center at
the front. Eos had told him it was called the Koh-i-noor and was
just over a hundred carats. The crown was a symbol of power and
wealth. But also a piece of history.

Zayn always thought it was wrong to lock
treasure away, even in a reputable museum. Life was supposed to be
lived, experienced. This crown should be gracing a beautiful woman,
not cold and lonely, locked away on a space station. And definitely
not Vand Braxx’s space station.

He opened the secure bag he’d brought to
carry the invaluable piece. He reached out to grab it and his
fingers passed right through it.

What the fuck? He tried again. A fucking
hologram!

He touched his ear. “Guys, we have a
problem. Crown is a hologram.”

Dathan’s curses echoed through the line.

“Braxx could have the real thing in a safe.”
Niklas was always the voice of reason on a Phoenix treasure
hunt.

Zayn glanced across the room. Wild Delican
art graced the walls and other artifacts and treasures were dotted
around. “I don’t think so. The room is jam-packed with expensive
stuff.” He thought of the curvaceous woman lounging in her exotic
room. “The guy likes his toys on display for everyone to see.”

Looking back at the pedestal, Zayn searched
for the hologram projector. He found the tiny dot, far smaller than
any he’d seen before, on the side of the stand. He pressed it and
the hologram of the crown disappeared.

What was left nestled on the velvet was a
small metal bird of prey with wicked-looking talons.

Anger stormed through him. “Damn it. Our
pain-in-the-ass rival’s been here.”

“There’s another one of those birds of prey.
He was here. Stole our prize right out from under us. Again.” Zayn
had no idea who their mysterious rival was, but this was the third
hunt where the treasure hunter had bested them. “What the hell does
he want?”

“Better yet, who the hell is he?” Nik
asked.

“Get your ass back to the ship, Zayn.”
Dathan’s voice was tight with barely leashed anger. “We can’t
ignore this little upstart any longer.”

Zayn fingered the silver bird before he
slipped it into his pocket. It reminded him of the hawk logo he’d
once worn on his Strike Wing uniform. He pressed the button to turn
the hologram back on.

Then an alarm started blaring.

Oh, fuck
. The bastard had set a trap.
Zayn spun and sprinted back toward the entrance to the vent
network.

He’d made it out of the throne room when he
heard shouts and the thunder of running guards. Great. He pushed
harder for more speed. The door to the bedroom was ahead.

Dominance by Will Lavender
Just Desserts by Jan Jones
Fate (The Edge of Forever) by D.C. Gambel
Longarm 242: Red-light by Evans, Tabor
Valentine (The Dragon Kings Book 3) by Kimberly Loth
Zion by Colin Falconer
Get What You Give by Stephanie Perry Moore
Bound by Their Love by Nicole Flockton
Lilli's Quest by Lila Perl
The Birthday Scandal by Leigh Michaels
Our partner