Read In the Flesh Online 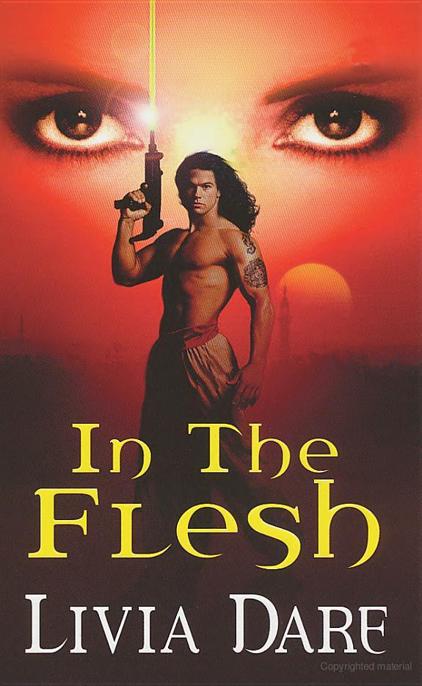 THE INJURED MAN TOOK HER BREATH AWAY

Rich, gleaming black hair blew gently around his nape as the swirling air pressure inside kept him upright. His skin was deeply tanned and stretched over powerfully defined muscles. She’d never seen a man with so many ripples of power beneath his skin; not even her warrior father displayed such strength.

His facial features were strong and bold, like the rest of his body. High cheekbones and an aquiline nose gave him an aristocratic cast; the powerful jaw and sensual lips made him dangerous. He was simply magnificent.

This is for all the readers
who’ve been waiting for Sapphire’s story
for five long years.

I hope you love it!

My gratitude goes out to Sasha White, Annette McCleave, and Jordan Summers. Thank you all for your input. And thank you for the support and encouragement over the last few years while you waited impatiently for this book to release. What great friends you are! I’m blessed.

Closing the bio-scanner, Wulfric, Crown Prince of D’Ashier, rose from his low crouch and stared down at the corpse at his feet. Desert sand swirled around the body, eager to bury it. “Unfortunately, yes.”

He lifted his gaze and scanned the berms around them. “At the next check-in, make the report. No need to call this in early and risk the signal being detected.”

They were too close to Sari to chance discovery. The Sarian king was always on the lookout for any provocation to go to war, hence the border patrols that never ceased.

Once every two months Wulf accompanied a platoon of D’Ashier soldiers on their rounds. His presence wasn’t required, but for him it was a necessary task. A good ruler lived the trials experienced by his people. He saw the world through their eyes,
from their level, not from so high above that he lost touch with their needs.

“Was he coming or going, Your Highness?”

He glanced at the young lieutenant next to him. “I can’t determine. It’s so hot today I can’t even tell how long he’s been dead.” The bio-suit Wulf wore protected him from both dehydration and the scorching sun, but he could see the heat waves shimmering above the sand.

After the recent Confrontations, the border had been closed abruptly, which left many families divided. The unfortunate result of this was the death of many citizens who tried to cross to their loved ones. Wulf attempted to reopen treaty negotiations with Sari on a regular basis, but the Sarian king always refused. Despite all the years that had passed, Sari still held a grudge.

Two centuries ago, D’Ashier had been a large, prosperous mining colony of Sari. After years of disagreements and injustices claimed on both sides, a bloody revolution had freed the small territory from its homeland, creating a permanent animosity between the two countries. The people of D’Ashier had crowned the popular and well-loved governor as monarch. Over the years, Wulf’s ancestors had expanded and strengthened the fledgling nation until it rivaled all others.

But the royal family of Sari still looked disdainfully upon D’Ashier such as a frustrated parent would look on an upstart child. Sari remained steadfast in its decision to ignore D’Ashier’s power and sovereignty. The talgorite mines of D’Ashier were the largest producer of the coveted power source in
the known universe, well worth every battle and war waged in an effort to reclaim them.

“Something is off.” Wulf lifted his field-sight lenses to scan the sky.

He and the lieutenant stood on a mound several kilometers away from the border. His
skipsbåt
hovered nearby, waiting. D’Ashier guardsmen kept watch all around them. There were a dozen of them altogether, the requisite number of every patrol. From this vantage, he could see a good distance and should feel relatively secure, yet the hair at his nape stood on end. He’d learned long ago to trust his instincts.

Surveying the situation anew, he said, “There’s something posed and artificial about this, and there are too many unanswered questions. This man couldn’t have traveled so far without transportation. Where is his skip? Where are his provisions? Why hasn’t the sand buried him?”

As his headset crackled to life, he lowered the lenses.

“There is no sign of anything of note, Your Highness. We’ve searched the surrounding two kilometers.”

He shot a glance at the young lieutenant who stood expectantly beside him. Wulf’s patrols were always officer heavy, usually with many newly commissioned. The general had made that request years ago in an effort to demonstrate to his subordinates how the weight of command should be carried. It was a mantle Wulf had worn without strain since birth. “Let’s go.”

They moved swiftly to their abandoned skips, using
the economical movements that were innate to inhabitants of a desert planet. Just as they prepared to mount the slender bikes, the ground rumbled ominously. The source was easily recognized, and Wulf cursed his failure to foresee the trap. Loosening the restraint of the glaive-hilt holster attached to his thigh, he yelled out a warning. Leaping onto his skip, he engaged the power and tugged hard on the controls, flying away just before the small enemy borer emerged from the sand.

“I can’t get a distress call out!”
cried the panicked lieutenant. The rest of the patrol assembled into the V-shaped group formation, and sped farther into D’Ashier territory.

“They’re blocking it.” Wulf’s tone was grim. “Damn it, they must have been boring their way through the sand for days.”

“Why didn’t they show up on the scanners? We were directly over them.”

“The power was off. Without that signature, they were effectively invisible.”

Wulf was highly conscious of the powerful hum of the borer behind them. The warning blip that had sparked their investigation must have been made as the transport entered D’Ashier from Sari, before the engines had been turned off. The corpse was merely the lure that ensured the anomaly wasn’t dismissed as a malfunction.

“How the hell could they stay under without environmental controls?”

“With desperation,”
the captain muttered, flying upward as a warning shot from the borer spewed
sand into a cloud before him.
“That’s not a Sarian borer. They’re mercenaries.”

Studying the upcoming landscape through his navigational scanner, Wulf said, “We can’t outrun them. Break up over the rise. Circle the rock outcropping.”

Clearing the embankment, the patrol separated into two lines. Another shot from the borer hit its mark, sending a skip spinning briefly before it exploded and killed the soldier who rode it. The rest of the men bent lower as they sped toward the multi-towered rock formation that rose as monoliths from the desert floor.

Wulf cursed when a well-aimed shot from the borer crumbled a tower of red rock. Blood-colored dust billowed as a horrifying cracking sound rent the air. Glancing down at his console, he saw transport-sized debris break loose, crashing down upon the other half of his patrol. From the loss of readout, he knew only a few survived.

Rounding the corner, he saw an opening that could give them a fighting chance.

“Dismount,” he ordered, weaving his skip between the monoliths. “Draw them out in the open.”

In the center of the rock outcropping was a circular patch of sand. They set down, alighted, and fanned out, forming an outward-facing circle. Drawing their glaives, they engaged the powerful blades and waited, the tension palpable.

Phaser fire shook the ground beneath them, but they were safe inside. The gaps and crevices between the various obtrusions were large enough for a skip to enter, but not the borer, which was much
bigger. If the attackers wanted to kill them, they’d have to come in on foot and fight hand to hand.

The waiting was endless. Sweat coursed down Wulf’s temple. The rest of his skin stayed dry only by benefit of the
dammr
-suit, which regulated his body temperature.

“We just want the prince.” The words echoed around them. “Give him to us, and the rest of you can live.”

Wulf felt the anger that spread through his ranks.

“You’ll have to kill us first!” the captain challenged.

“I was hoping you would say that,” came the laughing reply, then blaster fire lit the air and was deflected by the quick movement of a glaive, the powerful laser blade more than a match for the inelegant handgun.

Almost before he could blink, Wulf found his men surrounded. As he thrust and parried with almost innate reflex, he knew there had to have been more than one borer. All these men could not have fit inside one of the small transports. He also knew there was no chance for victory, not when they were outnumbered four to one.

The urge to surrender for the lives of his men was strong. Despite the risk his ransom would present to D’Ashier, Wulf was about to yield when his headset crackled.

“No, Your Highness.”
The captain shot him a sidelong glance.
“They will kill us regardless. Let us at least die with honor.”

And so he fought on, his chest tight with regret and frustrated anger. Every one of his soldiers gave their all, despite knowing the inevitability of the
outcome. They kicked at those who got close enough, cut down those who stumbled in their path, and kept as near as possible to Wulf in a vain effort to spare him.

One by one they fell, the air thick with the smell of burnt flesh. Bodies, both soldiers and mercs, littered the sandy floor. But all too soon, he stood alone against the many.

In the end, Crown Prince Wulfric of D’Ashier went down with the knowledge that he could not have done any more than he had.

For him, that was enough.

Sapphire lounged in the small private atrium that was attached to her quarters and absently studied the design of the Sarian palace on her compu-pad. Birds called out from their hanging cages, singing in chorus with the splashing water in the fountain. Sunlight poured onto the large plant fronds that lined the walls and shielded her in shade, the scorching rays diffused by the low emissive skylights above.