Read In Zach's Arms (Once a Marine, Always a Marine Book 1) Online

In Zach's Arms (Once a Marine, Always a Marine Book 1) 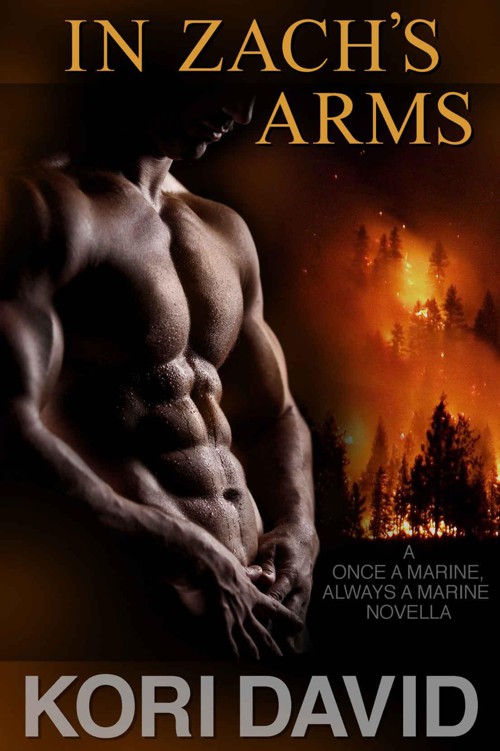 This is an original publication of CoKeA, LLC.

This is a work of fiction. Names, characters, places and incidents either are the product of the author’s imagination or are used factiously, and any resemblance to actual persons, living or dead, business establishments, events, or locales is entirely coincidental. CoKeA, LLC or the author, does not have any control over and does not assume any responsibility for third-party websites or their content.

This book or any portion thereof may not be reproduced or used in any manner whatsoever without the express written permission of the publisher except for the use of brief quotations in a book review. Contact
[email protected]
for permission.

To my husband and tireless supporter – I love you more than I can express in mere words.

To Judy Manjur, who told me back in college that I should write and then bought a book on how to do it. It’s been a long road, but I finally listened.

Also to Marina and Brittany, my extraordinary critique partners – because you both rock my world.

Elizabeth Russell was barely through the front door of her small, one-bedroom apartment when she gasped, her feet jerking to an abrupt halt.

“Oh my God,” she whispered, her hands covering her mouth.

She scanned the room, taking in the destruction. Sofa and chair overturned; cushions and plants littered the floor. The rich brown soil looked like a bloodstain leaking from the painted terra cotta pot. A faint dust outline clung to the stand where her TV and DVD player used to sit.

Elizabeth wrapped her arms around her chest to keep the tremors at bay. A quick glance across the room and a single tear streaked a path down her cheek.

Not the bookshelf. That was the only piece of furniture she’d spent any money on. She treasured her books and loved how the hand-carved shelves seemed to cradle them.

Elizabeth threw her purse on the side table by the door and grabbed one of the large brass candlesticks. Hoisting it over her head, she crept further inside. She was scared, but she was also mad. None of this made any sense. She lived in a good part of town, for God’s sake. No one else in her building had been broken into. This shouldn’t have happened.

Certainly not twice in the same month.

The first time was creepy enough, knowing that some whack-job had pawed through her things—even taking a pair of her favorite silky underwear as some kind of sick little trophy.

A fissure of dread snaked its way down her spine as she wondered what was taken this time. It was nearly impossible not to touch anything. She wanted so badly to pick her stuff up and put it all back the way it used to be, but knew from prior experience that she’d ruin any fingerprints the burglar may have left.

The kitchen sat untouched, but when Elizabeth reached the bedroom, she sank to the floor, her legs no longer supporting her. Shaking her head in denial, acid churned in her stomach.

Her apartment was empty. And devastated.

A tornado going through her apartment couldn’t have caused this much damage. The frilly lace curtains were shredded and hung limp on the remains of the twisted, bent curtain rod. Her closet had been ravaged, clothes tossed in every direction. The night stand leaned on three legs against the wall in the corner; the second-hand ceramic lamp she’d been so thrilled to find at the garage sale, lay shattered next to the bed. The seascape pictures from the walls had been ripped down, long jagged slashes through the canvasses.

But the bed…it was almost untouched, except for the rumpled covers and the single yellow rose lying grotesquely mangled on the pillow.

I have to get out of here.

Elizabeth slid up the wall for support and backed out of the bedroom. Tears streamed a hot path down her cheeks as she turned toward the front door and ran.

Grabbing her purse on the way out, she shot down the hallway toward the stairs. Panic clawed its way through her chest as her breath hitched and caught. One flight of stairs down, she tripped on the last step, the momentum throwing her forward. Arms flying out to keep her balance, pain streaked up her leg from twisting her left ankle, but she kept going.

Elizabeth stopped at a light blue door and knocked, while trying to pull in a calming breath. The door at the end of hall sprung wide and Elizabeth stifled a scream. When she saw her neighbor’s head appear, she sagged in relief.

Mr. McCreedy’s suspicious face emerged from his apartment. Narrow eyes and brows tugged inward, he slid his gaze up and down the hall. “And where’re you off to? It’s a bit late for you, isn’t it?”

Mr. McCreedy, a fifty-something man, always had his nose in everyone’s business. With his stocky build and light brown hair, he was nice, but he made Elizabeth uncomfortable. Several times, she’d caught him watching her from his window as she unloaded groceries or brought in her dry cleaning.

“Someone broke into my place.”

Elizabeth nodded as she kept a death grip on her landlady’s doorknob. Knocking harder, her knuckles stung and turned red from pounding. Mr. McCreedy shook his head and mumbled something to himself before shutting his door.
“Keep your pants on, I’m coming,” came the terse voice from within.

The scrape of metal was followed by a pop and the door swung open. Elizabeth threw herself into the arms of her startled landlady.

Elizabeth looked up into the grim face of the Detective patiently waiting for her attention. She sat in her landlord’s apartment, shivering beneath the thick blanket tucked around her shoulders. Cold fear settled in, bone deep, even though it was a balmy seventy-five degrees with the windows open. She didn’t even remember her landlady calling the police.

“I’m sorry, Detective, but I don’t know anyone well enough to have made enemies.” Elizabeth’s voice trembled. “I moved to Phoenix little more than a month ago.”

“Are you sure there’s no one in your past that would wish you harm? A jilted lover or ex-husband?” Detective Wolfe’s voice remained calm and soothing, but impatience crept into his tone.

“There are no lovers, jilted or otherwise, Detective. No ex-husbands and no family. I left Casa Grande and a one bedroom apartment six weeks ago. I keep to myself and write.”

“What do you write?”

“I’m a freelance writer by trade,” Elizabeth shrugged. “I write technical pieces for magazines and I ghost-write for several professionals. It pays the bills.”

“I’m sorry to keep hounding you this way, but there must be something. An average, run-of-the-mill burglar doesn’t stab his victim’s pictures or mutilate clothing.”

He moved to the coffee table and sat in front of her, making eye contact. “They don’t take the time to do that. Just in and out with your stuff. This is personal, somehow,” he explained. “We found what looks to be semen on the bed. That’s a helluva lot more complicated than a smash and grab.”

“I think I’m going to be sick,” Elizabeth said, closing her eyes and sucking in a deep breath.

“Have you ever had any problems with your clients?”

“No. They all love my work. I’m fast and good at what I do. I’ve never even had work rejected.”

Once the nausea settled, she opened her eyes to stare at Detective Wolfe. He’d arrived after the two patrol officers had thoroughly checked her apartment and taken some initial information.

“I just published my first fiction book. I don’t think I told the officers that.”

Flipping the page of the notebook he carried, Detective Wolfe scribbled a couple of notes. “What kind of book is it?”

When she didn’t answer, he looked up, frowning. Elizabeth could feel the heat move from her toes up to her face, heating the tips of her ears until they tingled. She was proud of her work, but at this moment, given the circumstances, it was embarrassing. “It’s um…”

“It might help the case, ma’am,” he said when her voice trailed off.

“So, mind-reading and telepathy? And raunchy sex scenes?” His eyebrows rose in inquiry. A small quirk of his lips signaled amusement.

“Yes, although my scenes aren’t overly racy, considering the genre.”

“Hmmm.” He wrote a few more notes. “You get any weird correspondence from fans? Hate mail? Threats?”

“It only came out two months ago. I don’t have a website yet and my agent is the only one with my address. If he’s received anything, he hasn’t told me about it.” She pushed a hand through her thick hair and shook her head. “None of this makes any sense.”

“What about close friends? Anyone else have your address?”

Her mind immediately jumped to Zacharias Steele. Friend wasn’t a strong enough word for him. He’d grown up in the crowded foster home next door. They had gone to high school together and had been there for each other though some dark times. Mainly hers. She felt much more than friendship for Zach, but what exactly that emotion was, she wasn’t really sure.

Elizabeth shook her head. “I chose a solitary career so that I didn’t have to interact with many people. I’m used to being alone, Detective.”

Wolfe snapped his notebook closed and nodded. While he didn’t look convinced, he finally stopped the interrogation.

“The crime scene techs are going to be in there for several hours dusting for prints and gathering evidence. Do you have anywhere you can stay for the night?”

Elizabeth’s mind immediately went to her friend. Her confidante. The only person who made her feel safe.

Once upon a time, she’d offered him her body. He’d offered her marriage instead. She was only eighteen; he was nineteen and going into the Marines and marriage was something that she would never, ever consider. She’d seen what marriage was like for her mother. And she wouldn’t ever put herself into that kind of bondage.

So, they’d parted friends. And she’d avoided seeing him in person for a couple of years now. She was a coward and didn’t want to risk rejection again. But none of that mattered now.

She parked her SUV and thanked whatever deity was listening that she owned a four wheel drive. Zach’s property sat way off the main road and the driveway had been treacherous.

Elizabeth liked the look of the cabin the minute she saw it. Redwood walls covered the sprawling structure and a wraparound porch dotted with handmade chairs made a cozy impression. A swing swayed lightly in the breeze. It was everything Zach had ever dreamed of and nothing like the foster home he’d grown up in. This place was private, roomy and all his.

She stepped outside and took in a deep breath, feeling her muscles relax. Summer was melting into fall and the air was crisp and pine-scented. Mountains loomed in the distance.

She leaned a hip against the fender, as she debated the best approach. She hadn’t told him she was coming. Didn’t even know if he had someone in his life who might object to her showing up unannounced, with her suitcase in hand.