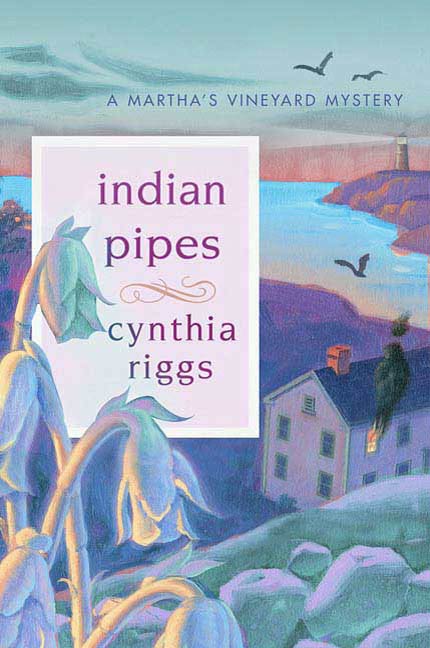 Jack in the Pulpit

An imprint of St. Martin’s Press.

INDIAN PIPES
. Copyright © 2006 by Cynthia Riggs. All rights reserved. Printed in the United States of America. No part of this book may be used or reproduced in any manner whatsoever without written permission except in the case of brief quotations embodied in critical articles or reviews. For information, address St. Martin’s Press, 175 Fifth Avenue, New York, N.Y. 10010.

G. Miki Hayden went over the manuscript with her red pencil, fixing a lot of stuff that hadn’t worked.

Most of all, thanks to Jonathan Revere, friend, plot doctor, cat minder, computer expert, plumber, fire builder, television producer, the quickest wit in the Commonwealth, and the Island’s “feared enigma.” What would I do without his frequent, “Have you thought of…?”

Thanks to The Bunch of Grapes,
Publishers Weekly
Bookseller of the Year, which stacks my books between the latest Harry Potter and David McCullough’s
1776.
Thanks to the West Tisbury Library, which keeps my books on the “hot new mysteries” shelf.

Bed-and-breakfast guests and West Tisbury villagers have been inspiration for story ideas and good and bad guys. I could not have manufactured my characters without their help.

Thank you Nancy Love, my agent, and Ruth Cavin of St. Martin’s Minotaur,
the
top editor in the mystery field.

Despite what you may read in the Island newspapers, and despite what the West Tisbury selectmen are saying, my stories are pure fiction, the characters are figments of my imagination, and I’ve even taken liberties with some of the places.

The fog poured in from Vineyard Sound, driven by a northwest wind that whipped it up the steep clay cliffs, streamers of denseness interspersed with open patches.

Through gaps in the fog, ninety-two-year-old Victoria Trumbull could see the beam from the lighthouse as it swept round and round above them, alternating red and white, warning mariners of the treacherous rocks of Devil’s Bridge that stretched out into the sound far below them. Victoria’s geologist daughter Amelia claimed the rocks were a terminal moraine dropped by the glacier twenty thousand years ago. Wampanoag legend said the rocks were scattered by the giant Moshup when he emptied his pipe into the waters of the sound.

As the light swept above them in the gathering dusk, droplets of moisture in Victoria’s white hair glistened red, then white. She leaned on the stick her granddaughter Elizabeth had cut from the lilac tree, and gazed down. She could hear the pounding surf two hundred feet below her, but she could see almost nothing. The bell buoy off Devil’s Bridge clanged. Far away, a foghorn moaned.

“Hiram Pennybacker is the worst bore on this Island,” said Elizabeth, who was standing behind her grandmother.

Victoria’s wrinkles framed her smile. “He’s got some fierce competition,” she said.

“We simply wanted to drop off that broken chair for him to fix, but no. Talk, talk, talk.” Elizabeth edged closer to the fence. Her arms were summer-tan against her white T-shirt. “You can’t see much, can you.” Every gesture her granddaughter made reminded Victoria of Jonathan, her dead husband. Elizabeth, who was in her early thirties, was tall and slim and stood straight, like her grandfather.

Elizabeth shivered. “It’s mysterious this time of evening, no one around, and the mist swirling. It feels more like October than August.” She turned away from the fence. “Let’s go home, Gram, and have a cup of tea.”

“Wait a moment.” Victoria stared down at the cliff. “I thought I saw something move.”

Elizabeth stepped back to where her grandmother stood with her knobby fingers laced in the fence wires, her walking stick in hand.

“Where?” Elizabeth followed her grandmother’s gaze. “I can’t see a thing.”

“Something moved. Look!” The fog had thinned briefly, and Victoria pointed to a wild rosebush that clung to the gullied orange clay below them.

“I still don’t see anything. Only poison ivy.” Elizabeth wrapped her arms around her body. “Let’s go.”

Victoria didn’t reply. She willed the fog to part again so she could see whatever it was that had moved. The motion wasn’t from the wind, it was more like an animal. A dog, perhaps, was trying to get back up the cliff.

Victoria caught a glimpse again of something, farther away than she had thought and much larger than a dog.

Elizabeth put both hands on the pipe rail at the top of the fence and peered down toward the rosebush. “You’re right, Gram. Someone must have fallen.”

“We need to get help right away,” said Victoria.

“I’ll climb down.” Elizabeth started to lift herself over the fence.

Victoria shook her head. “Go back to Hiram’s, quick. Call the fire department, and get Hiram to come back with a rope. I’ll wait.”

Victoria kept watch as darkness closed in, as the lighthouse beams overhead grew brighter and more diffuse. She caught only momentary glimpses of the form near the rosebush, no longer moving.

The ten or fifteen minutes it took Hiram to arrive seemed far longer. Victoria’s eyes hurt from staring down the slope, trying to
pierce through the murk. When he finally arrived, Hiram was carrying a backpack and a fat coil of rope around his right shoulder. He walked with his back bent slightly and his feet splayed out. He was a short, stocky man in his fifties, with a slight potbelly and gray hair worn in a crew cut.

“Thought you had to get right home,” he mumbled around the pipe clenched between his teeth.

“The fire truck’s on the way. Nelson and his boy were at supper. His turn to drive this week.”

Victoria was feeling the evening chill. “I haven’t seen any movement since Elizabeth left to get you, Hiram.”

“I’ll climb down.” He squatted next to her and secured an end of his rope to the fence post. “This ought to be long enough.”

When Elizabeth returned, she was carrying a sweater. “This was in the car, Gram. Thought you might want it.”

“Thank you.” Victoria leaned her stick against the fence post and slipped her arms into the wool cardigan Elizabeth held for her.

Hiram undid the straps of his backpack and fumbled through it until he found a flashlight. He flicked on the light and aimed the beam down the cliff. “Can’t see a thing down there. It’s a pea-souper. Seen it coming for a couple of days. How far down is he, Victoria?”

“About a quarter of the way to the bottom, I would guess.” She thought for a moment. “Where the cliff changes from a gentle slope and drops straight to the rocks. Right at the break is a rosebush.”

“I know the place you mean,” said Hiram. “Bad spot.” He lifted himself over the fence rail, and, twisting a section of rope around his waist, started down toward the cliff face. Victoria watched him until he disappeared, hunched slightly, picking his way carefully on the slippery clay, stepping through the lush growth of poison ivy. She saw the circle of his flashlight beam fade away.

Elizabeth tilted her head to one side. “I hear the fire truck.”

Victoria, too, heard the heavy thrum of the engine. From where she stood she could see the fog glow as the truck’s rotating red lights mimicked the lighthouse above them. Figures trudged up the steps, and she recognized Nelson Minnowfish, his boy Sam, and a third person she didn’t know. They were carrying ladders, more rope, and
handheld searchlights that threw shadows of the chain-link fence against the bank of fog beyond.

Victoria pointed. “He’s climbing down to where I saw the person.”

“Shoulda waited for us to get here.” Nelson aimed his searchlight. “Hiram!” he yelled down. “Can you hear?”

“Nelson?” Hiram’s muffled voice came back up the cliff. “We got a problem. Send down the stretcher.”

“Somebody down there?” Nelson shouted.

“Can’t tell.” The words echoed against the cliff.

Everything was a blur to Victoria from then on. Radio, lights, the ambulance, EMTs, shadows of moving people. Ladders lowered down the cliff, ropes, shouts. The aluminum stretcher was handed up and over the fence and set on the ground. EMTs and firefighters crowded around.

Victoria stepped away. She did not want to see the form on the stretcher. The only voices were sharp orders. Except for the foghorn moaning off Paul’s Point and the mournful clang of the bell buoy, the only other sounds were mechanical. She heard the throb of the fire engine, the click of the rotating lights on the ambulance, a shout of “All clear!” and the buzz of a defibrillator that might start a heart pumping again.

Finally, the EMTs, the firemen, the police, stood aside, and, one by one, moved away from the stretcher.

A technician Victoria had seen at the hospital passed her, peeling off a surgical glove, his head down.

“Is he dead?” Victoria asked.

The EMT looked up, disoriented.

“What?” He focused suddenly on Victoria.

He nodded, peeling off the second surgical glove. “He was gone, ma’am. Nothing we could do.”

He shook his head. “No, ma’am. They thought he was from West Tisbury. I’m not from up-Island, myself. Excuse me.” He moved on down the steps to the ambulance.

Elizabeth eased next to her grandmother and put her arms around Victoria’s sloping shoulders.

“It’s lucky you found him, Grammy.”

Victoria looked up at her granddaughter. “They said he’s from West Tisbury. Someone we know? If only we hadn’t lingered so long at Hiram’s. The person was still alive when I first saw him, I’m sure he was.”

“They said he’d lost too much blood, Gram. That he was too badly hurt. They said he must have crawled up from the rocks where he fell to where you saw him. They said it was a miracle he could move at all, after the fall. It’s almost two hundred feet. There was nothing anyone could do. Nothing at all. That’s what they said.”

The Proposal Book 1 (Submissive Romance) by Lucia Jordan
0451471075 (N) by Jen Lancaster
Private Politics (The Easy Part) by Emma Barry
Your Orgasmic Pregnancy by Danielle Cavallucci, Yvonne K. Fulbright
The Code by Gare Joyce
Midnight Curse by Faellin Angel
The Whiskey Rebels by David Liss
Her Own Rules/Dangerous to Know by Barbara Taylor Bradford
The Silverwing's Sorceress: THe Shadow Slayers, Book 2.5 by Cassi Carver
The Lying Tongue by Andrew Wilson
Our partner