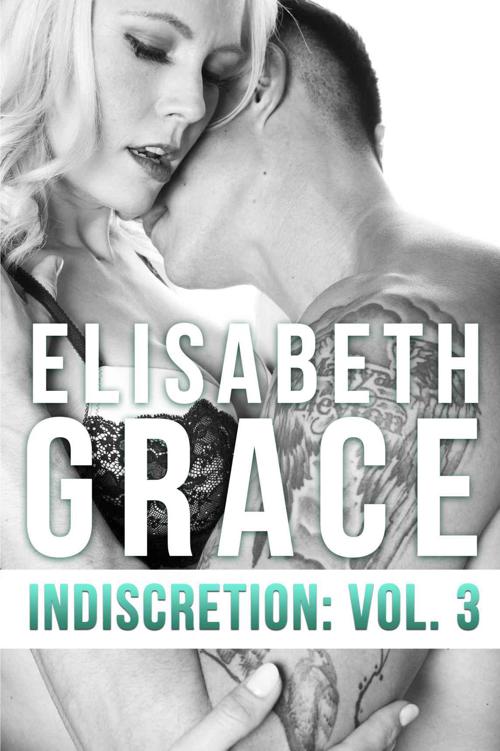 Other Books by Elisabeth Grace

Cover design and photo by: Regina Wamba of
Mae I Design

(n) a nostalgic longing to be near again to something or someone that is distant, or that has been loved and then lost

I glanced at the clock in the kitchenette when the pounding at the door started. I scrunched my face in confusion as to who it could be. It was way too early for it to be business related—unless there was a problem.

Shit. I hoped there wasn’t a problem. That was the last thing I needed. I looked through the peephole, surprised to see Chloe standing there. Surprised, but pleased.

I unlocked the door and swung it open, a wide smile on my face, not caring that I wore only a towel around my waist. “This is a pleasant surprise,” I said.

The words were barely out of my mouth before she shoved something forcefully into my chest and pushed her way past me. I put a hand on the object she’d tried to impale me with and turned to face her.

Her eyes were narrow slits, and it didn’t escape my notice that her fingernails were digging into the palm of her hand. “You have some nerve,” she said with barely contained fury.

“What the hell are you talking about?” My defenses rose immediately at her tone. I hadn’t the slightest idea what I could’ve done to piss her off so much.

“That!” She pointed to my chest, at what she’d shoved at me.

Finally, I glanced down. It was a newspaper. When I opened it, my attention went to an article that had been circled. I skimmed it briefly, but it was enough for me to understand Chloe’s ire.

I’d done an interview with a local reporter, months before I’d come to Bar Harbor. I vaguely recalled putting down the Tribute development where she worked, during that interview. I cringed as I remembered being fed some info from our PR department about the sales agent working for Tribute. In the interview, I’d questioned how a local agent could possibly hold the knowledge and expertise required to service a clientele the calibre of who would be purchasing the units.

Shame crashed over me like a wave as I recalled that I also
may
have mentioned a run-in Chloe had had with the real estate board’s ethics committee years ago, calling her integrity into question. It was a total bullshit case with some dipshit lady trying to take a green agent to the cleaners. I’d known that when I’d made the comment to the reporter, but I’d had no way of knowing at the time that it was Chloe I was referring to. Success at any cost had been so ingrained in me since I was a child that I hadn’t even felt bad for doing it. At the time. Now I felt nothing but shame and regret.

“Oh, I’m sure you’ve got some smooth line ready to give me.”

“It’s not a line.” That much was true, though I wasn’t sure the truth would be of much comfort to her.

Her eyes narrowed into slits. “Bullshit. I’m finally starting to figure out that you’re full of them.”

I pressed my teeth together in an effort not to lose my own temper. It wouldn’t help matters, and she had every right to be pissed off. “Calm down and let’s discuss this like two adults,” I said in a placating tone.

“I will not calm down! Do you realize what this damn article could cost me? That ethics case was complete bullshit, but now that you’ve used it to question my ability and put a question mark over the entire development—”

“I know it was bullshit.” I heaved out a heavy sigh.

“What?” she almost whispered. Her eyes were wide in their sockets, the hurt in them as clear as a summer day.

I drew in a deep breath and ran my hands through my hair. “I know the entire case was bullshit.”

She swallowed hard and gave me a slow, disbelieving head shake. “And you still tried to use it against me?”

I took a step toward her, wanting nothing more than to feel her body beneath my hands so I knew she wasn’t going to slip through my fingers. But she backed away, and that cut like a fucking knife dead center into my heart. It was the first time since I’d met her that she’d been repelled by my proximity, instead of drawn to it.

“I did that interview over the phone months ago,” I tried to explain. “Before I even came to town.”

She crossed her arms over her chest. “Is that supposed to make me feel better? You’re probably lying anyway. Obviously, you’re good at it.”

I clenched my teeth. I understood her anger, but her distrust grated on me. “Call the fucking reporter and ask him if you don’t believe me!”

Her eyes widened in shock at the volume of my voice. “That still doesn’t explain why you would say anything about the ethics case if you knew it wasn’t true. Regardless if you realized it was me or not.”

She had a point. I started pacing from the entry way to the living room. How could I explain this in a way that she’d understand? Truthfully, sometimes I didn’t even understand what propelled me to do some of the things I did.

No, that wasn’t true. I knew exactly why. I had acted how my father had always expected of me—doing whatever it took, by whatever means necessary to be successful.

Still, that justification didn’t assuage the guilt. That gnawing feeling in my gut that I wasn’t good enough and never would be. The feeling that I was the one responsible for all the pain and heartbreak my parents had suffered through. But I couldn’t tell her that. I was too much of a fucking coward. It was one thing to know the unimaginable pain you’d caused others, but quite another to share it.

I wasn’t ready for whatever this was between Chloe and I to be over, and if she knew… Whatever. I wasn’t going to think about it because that couldn’t happen.

“There’s something you have to realize about the way I grew up.” I placed my hands on my hips and looked down at the floor. I was unsure how to go about saying what I had to without sounding like a poor little rich boy. “There is an immense amount of pressure being in a family like mine. Couple that with the fact that my father is not an easy man to please, and it means that I’ve never really been free to just be myself. I have standards to live up to and things that are expected of me. My father doesn’t always play by the rules. He’s a bully and can be very hard-headed. If I’m honest, I can say that I’ve always felt like a bit of a failure to him. I try to live up to his expectations, but slitting someone’s throat to make more profit has never been something that sits well with me.”

“So what are you saying exactly?” She still looked upset, but the anger in her eyes had dimmed, if only a little.

“There are times when I take a course of action just to get the results I know he wants. When I gave that interview, that’s what I was thinking…that my dad would be proud of how I handled it. Dropping misinformation and raising questions is something he’s good at. I’m sorry if I hurt you in the process.”

She sat quietly, contemplating what I’d said for a moment, biting the inside of her cheek. “Why didn’t you give me a heads up? Some warning this was coming? Or call the reporter and change your statement after you realized it was me. There were lots—”

I cut her off by telling her the truth. “I forgot all about it. Like I said, it was months ago and I’ve been busy here. And when I’m not busy, I’ve been spending my time with you. If I had thought of it I would’ve done all those things. It was just one interview in a long string of them that I’d done.”

Chloe stepped back and sat on the couch. I couldn’t take the physical distance between us, so I joined her, arranging my towel so I wasn’t on display. Thankfully, she wasn’t repelled by how close I was this time and stayed seated, though she was looking at her hands twisting in her lap. I’d do almost anything to see those dark chocolate eyes turn in my direction.

“You still lied,” she whispered.

“I misled,” I softly corrected her.

“Is there a difference?” Finally she turned to look at me. Maybe it would’ve been better if she hadn’t. There was so much disappointment in her gaze, tears gathering in the corner of her eyes.

Fuck.
My stomach knotted. I was the one who did this to her. “Normally, I would say yes. That reporter could’ve looked into my statement to determine its validity, but he didn’t. I know how important your career is to you. In the end, I hurt you…so, no. There’s no difference because the result is the same either way.” It was the truth. All I could do was hope she’d see the honesty in my statement and choose to forgive me.

She nodded and glanced down at her hands again. “It doesn’t matter anyway.” There was a finality in her tone that had all my muscles tensing.

My thoughts raced as I tried to figure out where she was going with this. “What’re you talking about?”

She took a deep breath and hesitated a moment before speaking. “I was headed here before I found the article to…tell you we couldn’t see each other anymore.”

Confusion swarmed my mind, and I reached for her hand on instinct. When she tried to pull it away, I held on tighter. She was trying her best, but I wasn’t letting her push me away. Not without one hell of a fight.

“Why wouldn’t you want to see me anymore?” There was an undercurrent of anger in my tone that I was trying very hard to keep in check.

Kneading to Die by Liz Mugavero
Raid on Kahamba by Lok, Peter
Tale of Tom Kitten by Potter, Beatrix
FATAL FORTY-EIGHT: A Kate Huntington Mystery (The Kate Huntington Mysteries Book 7) by Kassandra Lamb
A More Beautiful Question by Warren Berger
Harlequin Historical September 2014 - Bundle 1 of 2: The Lone Sheriff\The Gentleman Rogue\Never Trust a Rebel by Lynna Banning
Israel at War: Inside the Nuclear Showdown With Iran by Joel C. Rosenberg
Hidden in the Shadows by T. L. Haddix
Skulduggery Pleasant: The End of the World by Landy, Derek
Koko the Mighty by Kieran Shea
Our partner