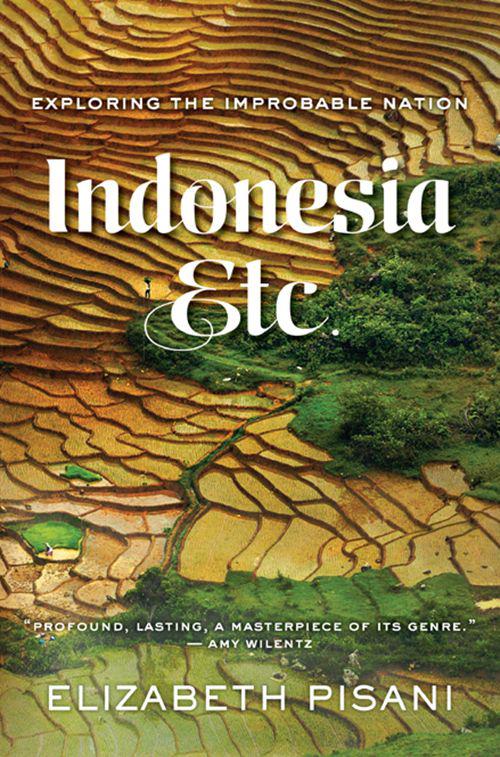 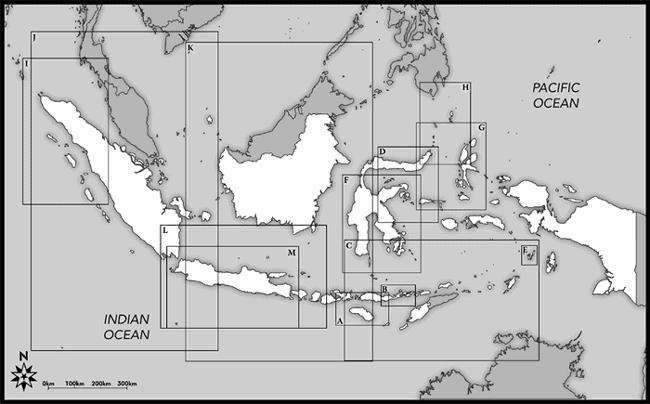 2  The Ties that Bind

5  The Emperor is Far Away

7  Spoils of the Earth

‘Miss! Come in and meet my granny!’ The invitation came some twenty years ago from a smiley young man who had spotted me tramping along a dirt road in the obscure south-eastern Indonesian island of Sumba. It was skillet hot and ashtray dusty, and I was very thirsty. His granny probably had tales to tell, and she’d certainly be good for a glass of tea or two. Why not? I had clambered up a ladder onto a bamboo veranda where other youngsters were making unrestful noises with gongs and drums, then ducked through the low doorway and blinked into a windowless darkness. Eventually, by the tiny grains of light that sprinkled through the bamboo-weave of the walls, I made out a poster of Jesus and the Sacred Heart. There was a bag of dirty laundry on a bamboo chair. But the room was otherwise deserted; no sign of granny.

‘Just a second!’ The young man fiddled around with the laundry bag, untying it and peeling back the napkin on top to reveal Granny. She had died the previous day, and would be receiving guests each day until her funeral four days later, as was the local custom. ‘It’s an honour for her to meet you,’ he said. And we sat and drank tea.

Indonesia is full of such improbable moments. In Indonesia, a presidential candidate who doubles as a sultan and moonlights as the head of the national chamber of commerce keeps a posse of albino dwarves at his court for good luck. In Indonesia, a local police chief will explain how crocodiles are called together so that the innocent reptiles can point out the man-eater for capture. It’s a country where it is possible to share a beer with a general who cheerfully admits to prolonging a guerrilla war to inflate his budget, and to take tea with a corpse.

Indeed the nation itself is improbable – a string of 13,466 islands inhabited by people from over 360 ethnic groups, who between them speak 719 languages.
*
It exists today because its combination of volcanic ash and sea air produced spices, and spices drew Europeans. Not content to trade with local princes and sultans as their Arab, Indian and Chinese predecessors had, the Europeans introduced monopolies that led to conflict, colonization, kleptocracy and a war of independence. The modern state of Indonesia was cobbled together out of the wreckage of all of that.

When the country’s founding fathers declared independence from Dutch colonists in 1945, the declaration read, in its entirety:

‘We, the people of Indonesia, hereby declare the independence of Indonesia. Matters relating to the transfer of power etc. will be executed carefully and as soon as possible.’

Indonesia has been working on that ‘etc.’ ever since.

Many countries have struggled to find a
raison d’être
that goes beyond lines drawn on a map by former colonists. But few have had to mash together as many elements as Indonesia. Modern Indonesia runs around the girdle of the Earth, covering the distance from London to Tehran, or from Anchorage in Alaska to Washington DC. At the north-western extreme on the tip of Sumatra is Aceh, peopled by Muslim Malays with a dash of Arab etched into their features who are proud to call their land ‘the Veranda of Mecca’. Some 5,200 kilometres to the south-east is the province of Papua, which makes up much of the western half of the giant island of New Guinea, home to black-skinned people many of whom, when I first visited, went naked but for penis-gourds, and who had developed some of the most sophisticated farming techniques in the archipelago. The people of Papua and those of Aceh eat different food, pray to different gods, play different music and are of different races. In between, a riot of other cultures is adapting ancient traditions to modern times in wildly different ways.

Today’s Indonesia is home to one in every thirty of the people on this planet – 240 million at the last count. That makes the country the fourth most populous in the world. Jakarta tweets more than any other city on earth, and around 64 million Indonesians use Facebook – that’s more than the entire population of the UK. But 80 million live without electricity (all of Germany), and 110 million live on less than two dollars a day (all of Mexico). Hundreds of thousands live without electricity on less than two dollars a day
and
are on Facebook.

The list of ‘world’s biggest’, ‘tens of millions’ and ‘fastest growing’ statistics from Indonesia is long. And yet as Indonesian entrepreneur John Riady said recently: ‘Indonesia is probably the most invisible country in the world.’

Certainly when I was first posted to Indonesia by Reuters news agency in 1988, I knew virtually nothing about the country. I had backpacked my way through Java and Bali in 1983, when I was nineteen, and had once dropped in to North Sumatra to visit orang-utans. That gave me a set of images to work with: Indonesia was a friendly place, but somewhat schizophrenic. Daily life was shambolic and unpredictable, but on top of the generalized chaos sat a painfully refined culture, all ponderous dancers in delicate batiks twirling their hands to the sounds of gamelan orchestras in the shadow of exquisite temple complexes.

Those images were firmly Javanese. In my mind at the time, as in the minds of most foreigners who think about it at all, Indonesia maps on to Java. In a way, that makes sense. Though it takes up just 7 per cent of Indonesia’s land mass, Java is home to 60 per cent of all Indonesians. That’s 140 million people in an area the size of Greece. The nation’s capital Jakarta is in Java of course; Javanese rulers have spread their influence through the many other kingdoms of the islands with varying degrees of success ever since the twelfth century. When Reuters told me, with just ten days’ notice, that I would be moving from New Delhi to Jakarta, I knew virtually nothing of the hundreds of other cultures that make up the nation. I could call up an image of Hindu Bali – women swaying gracefully under the weight of the temple offerings they bore on their heads – or the odd image of a coral reef (Eastern Indonesia), a steamy jungle (Sumatra or Kalimantan) or a perfect surf break (the far west). Nothing more.

For the next two and a half years, whenever I could escape from the tyranny of daily stock market reporting, I wandered the country trying to get my head around ‘Indonesia’. I hunted orang-utans and separatist rebels, visited illegal gold miners and illegal immigrants. In Jakarta itself I lunched with bankers, film stars and former political prisoners. As my Indonesian grew more fluent, the conversations grew more interesting. But everything I learned made me more aware of how unknowable the country was. Indonesia is forever curdling the expectations.

I left Indonesia in 1991, following several differences of opinion with the military about the accuracy of my reporting, particularly around the unfolding civil war in the north-western province of Aceh. After I left, the military spokesman, Brigadier General Nurhadi Purwosaputro, sent me a note handwritten on personalized notepaper from the Sheraton Towers hotel in Brisbane:

I suppose our relationship has always been rather official (professional) because of your position as a journalist. That being the case, I should let you know, with respect and as the Armed Forces spokesman, that you’ve worked and done your job very well. You’ve shown a profound understanding of the people, the state, the government and the real problems facing Indonesia.

Now your position has changed. You are an ordinary person who I think has a great fondness for Indonesia.

He went on to invite me to stay at his home when I visited Jakarta. This was a man who told brazen lies about the brutality that his colleagues were visiting on Indonesian citizens in the quarrelsome provinces of Aceh, Papua and East Timor and in other parts of Indonesia too. He did it reluctantly, almost clumsily; sometimes he left his office by the back door to avoid having to face our questions. He once called me long after my deadline to apologize for not being able to give a timely comment on some minor massacre. His excuse: a sacred dagger belonging to his Commander-in-Chief had, of its own accord, made its way back to the head man’s birthplace. The Brigadier General had been busy arranging for the dagger to be brought back to Jakarta, and didn’t have time to speak to journalists.

This sort of obfuscation was maddening. But I also found it vaguely charming, the idea that a senior military figure would tell a foreign correspondent stories about magic daggers to avoid having to tell more direct lies about the cruelty of his colleagues. While I often wanted to wring Brigadier General Nurhadi’s neck, I couldn’t help liking him. And he was right. Despite the bad behaviour of many of its leaders, I did have a great fondness for Indonesia.

That fondness brought me back to the country in 2001, three years after protesting students had seized the parliament building, ending Suharto’s thirty-two years in power. In the decade I had been away from Indonesia I had retrained as an epidemiologist, specializing in HIV. Now my job was to help Indonesia’s Ministry of Health track the spread of an epidemic it would have preferred to ignore among people that it wished didn’t exist: drug injectors, transgenders, women and men who sold sex, gay men, prisoners. I still travelled a lot, but over the following four years I saw a rather different Indonesia. Half my time I was locked up with minor civil servants in workshops in three-star hotels in provincial cities. It was a world of protocol, PowerPoint presentations, and endless boxes of sticky cakes. From the inside, the Indonesian bureaucracy seemed less incompetent than I had previously thought, but no less self-serving.

Much of the rest of my time I seemed to spend in back alleys with drug injectors, tripping the pavements with transgender prostitutes or in the blinged-up clubs of the country’s embryonic gay scene. I had unlikely encounters. A tattooed junkie I was talking to on a dingy train platform once treated me to a Fanta. ‘We were going to rob you, miss, but actually you’re quite funny,’ he said. I formed unlikely friendships: to this day I get online advice about photography from a ladyboy who used to be one of the capital’s most celebrated sex workers.