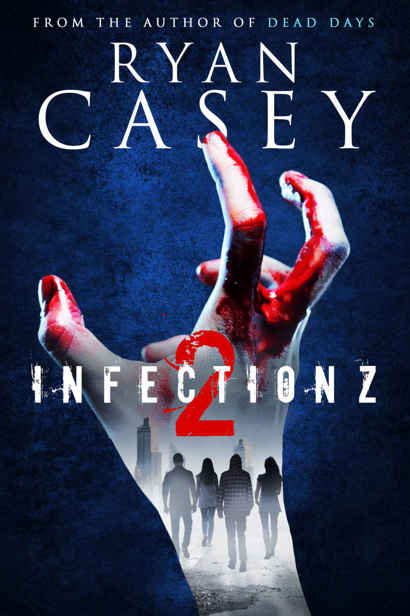 I
f you want
to be notified when Ryan Casey’s next novel is released and receive exclusive free books, please sign up to his mailing list.

Y
our email address
will never be shared and you can unsubscribe at any time.

I
nfection Z
2 is the sequel to Infection Z.

If you’d like to read the first book, visit here:

C
harlie Harrison dragged
the heavy shopping trolley of water bottles along the potholed road and prayed today wouldn’t be the day
they
finally caught up with him.

Charity Lane hadn’t always been such a dumping ground. Not until the dead rose, and then the missiles struck. It was one of suburban Manchester’s nicer roads, for sure. Tall, evergreen trees at either side of the smoothly tarmacked pavements. The sound of birds whistling and singing overhead. The distant chatter of a friendly little row of cafes and shops constantly in the distance.

But all that had gone.

The trees lay across the road like they’d been put there intentionally as barriers or blockades. The pavement was a nightmare to walk along, let alone pull a trolley of water bottles along, with large chunks of it unearthed. One wrong step and you’d wander right into a hole the length of your leg, sprain or break your ankle.

And you didn’t want that.

Not with the dead around.

Charlie swallowed. His throat was dry. He was desperate for a drink, but he was even more desperate to get the water bottles back to Sammy and his two kids, Renate and Sebastian. Their survival was ultimately more important than his. Which was why he found himself alone in the streets in the first place, scavenging whatever supplies he could.

Because if the dead didn’t raid one of the last remaining shops, other people would.

And Charlie was fast discovering that other people were just as much of a worry as the hungry dead in this harsh new world.

He listened to the trolley’s wheels scrape along the pavement. The noise echoed against the shutters of the betting shops, the bookstores, on either side. He tried not to look at these stores. Tried to stay blissfully naive about what might be inside them. But every now and then, he found himself peeking through a smashed window, seeing the blood all over the white tiles of the floors, and wishing he’d not even come on this damned suicide mission at all.

He looked ahead and saw the six storey, brown-bricked flat block ahead. He was nearly home. Nearly back to his family. Which made every ounce of risk worth it. Because if you weren’t willing to risk a thing for the vulnerable ones you cared for, then what was the point even having a family at all?

He heard a crow caw somewhere overhead in the grey sky. Although it had been a week since the bombs landed on Manchester, there was still a smell of cool smoke in the air, like the remains of a forest fire days after it’d gone out. Charlie knew what that smell was like because Sammy and him had been caught up in one when they’d visited California back in 2002. Delayed their holiday a few months when it clashed with a friend’s wedding, then ended up getting caught in the frigging McNally Fire in the stifling heat of summer. Charlie remembered looking over the Inyo National Forest and tasting the burned pines in the air. And this brought that memory flashing back into his mind.

Except it wasn’t burned pines he tasted and smelled in the air right now. It was barbecued meat.

He pulled on the heavy trolley filled with water bottles. His palms were sweating, and his fingers felt like they were going to pop out of their sockets. He staggered over the holes in the concrete. Just a few hundred yards from the flats his family were holed up in now. Shit. He’d expected to go out and find about five or six half-drank bottles lying around. But he’d found a whole store’s worth, packed with thirty unopened bottles. Enough to last them days. Weeks, even.

But as Charlie looked at the devastation on the street—the smashed windows of abandoned cars, the splattering of blood on the concrete reminding him of the horrible screams he’d heard when the dead first started walking—he knew nobody was coming for him. Nobody was coming to save him or his family.

He had to look after his family himself. Provide for them. Handle things as they came. And that wasn’t easy when you had two seven-year-old twins who didn’t know why the hell they weren’t allowed to go to school—which they loved, gracefully—all of a sudden. Or why they couldn’t go round to their friends’ houses for tea, or why they weren’t allowed to go play on the street no matter how much Sammy and Charlie used to let them cycle along the pavement.

Life had changed. It had changed for everyone. And as far as Charlie could see, it was going to keep on changing.

He just dreaded to imagine how much it might change.

He picked up his pace as he approached the block of flats. He was so close he could see the window of his apartment block now. The shutter blinds were closed. And no, he wasn’t looking forward to locking himself away in that sweaty, dingy apartment with just the one bedroom and not a fragment of privacy. But life wasn’t about the luxuries anymore. It was about sticking together.

And who knows? If they stuck together long enough, maybe they’d be able to look for an upgrade. A new place to live.

The model home that Sammy had always dreamed of but that Charlie’s job in the lower echelons of the council had never been able to provide.

He stared up at the window. Sometimes, when he came out to collect food or water or any kind of supplies, Sebastian or Renate would peek through the blinds and smile and wave at their dad. And although Charlie told them not to do it because it risked attracting the attention of other not-so-living things out here in the streets, he had to admit he liked that greeting. Loved it, in fact.

It was a reminder that he was home. He’d survived another day. All was well.

He reached the crossing in the debris-laden road and he stopped when he heard movement to his right.

Hearing any sort of movement triggered an instant reaction since the dead started walking. Like a reflex muscle, one that had always been there since the dangerous days of our ancestors, but one that had nullified as the dangers of everyday life minimised.

A reflex muscle that had reactivated in full force.

He looked down the street. He couldn’t see anything out of the ordinary. The usual: abandoned cars, smashed glass covering the chewed-up concrete. The occasional charred remains of a fallen tree, an electricity pylon. A body.

He took in a deep breath of the smoky air and carried on dragging the trolley across the road. He knew he was probably just being paranoid. Truth be told, this area had proven a decent place to hide out when it came to avoiding both the dead and other people. Yes, he did wake at night to the awful sound of their cold, rotting corpses dragging their feet along the road, and he did suffer intense nightmares where he was running away from them, but not just any of them—running away from his wife, his two children, who always caught up with him and tore him apart …

An echoing noise from behind him. Like an empty Coke can hitting the road.

He swung around. Stared back in the direction he’d come from. Although it was freezing, he could taste sweat from his wrinkly, unshaven face. Nothing there. Just the wind. Just the…

He turned back around and he saw something in the corner of his eye.

It was down the road where he swore he’d heard the first noise. Just a small movement that he couldn’t make out initially.

But something coming towards him.

He started to drag the trolley of water bottles along when he froze.

He saw the movement getting closer, and to his short-sighted eyes, it started to make more sense. And yet … it was impossible. It had to be impossible. He’d never seen them in that kind of number before. They usually travelled in groups, but not groups
that
big.

He gripped tighter hold of the water bottle trolley and jogged across the street. In the apartment block, he could see the blinds twitching as one of his children looked out at him.

He could hear the footsteps getting closer. He had to get to his family. He had to hide. He had to get the heavy load of water inside and he had to keep quiet. Because this was unlike anything else. This was on a whole new level. This was …

He heard the footsteps from behind.

And then from ahead.

He held his breath. Kept on holding on to the trolley handle with his sweaty hand.

This couldn’t be real. This had to be a nightmare. He had to be dreaming.

Masses of dead unlike any he’d ever seen were piling down the street in his direction.

And from up ahead.

Running, and getting closer by the second.

He swallowed a lump in his throat. Felt a warm tear roll down his cheek.

He looked up at the window of the flat he was staying in. Saw Sebastian wave at him.

He lifted a hand and waved back, and then he closed his eyes when he saw Sebastian’s little brown eyes widen at the oncoming mass of the dead.

“I’m sorry,” Charlie muttered, as the footsteps and the gasps got closer, as the rotting smell overwhelmed his senses. “I’m so sorry.”

Sammy didn’t see her husband get torn to shreds by the zombies outside.

But she’d never forget her son’s scream as he watched every second of his father being ripped apart.