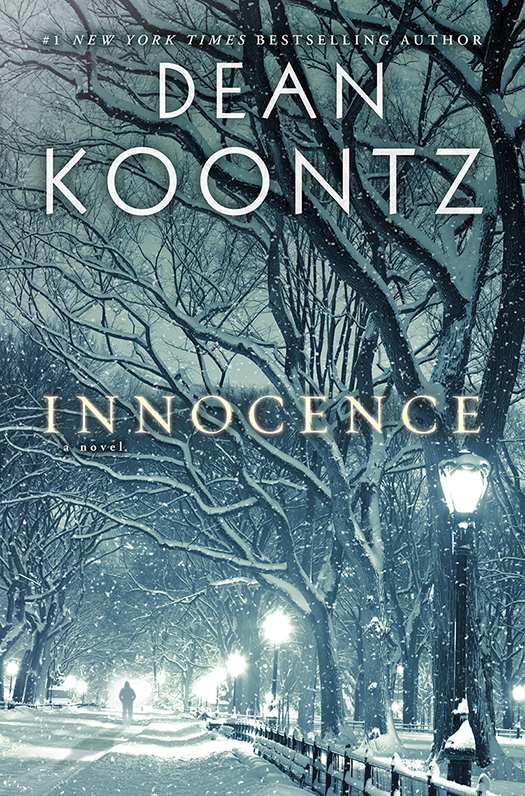 Innocence
is a work of fiction. Names, characters, places, and incidents are the products of the author’s imagination or are used fictitiously. Any resemblance to actual events, locales, or persons, living or dead, is entirely coincidental.

Published in the United States by Bantam Books, an imprint of The Random House Publishing Group, a division of Random House LLC, a Penguin Random House Company, New York.

A signed, limited edition has been privately printed by Charnel House.

Title page art from an original photograph
by Agne Kveselyte

B
ANTAM
B
OOKS
and the H
OUSE
colophon are registered trademarks of Random House LLC.

Rarely do great beauty and great virtue dwell together
.

HAVING ESCAPED ONE FIRE, I EXPECTED ANOTHER
. I didn’t view with fright the flames to come. Fire was but light and heat. Throughout our lives, each of us needs warmth and seeks light. I couldn’t dread what I needed and sought. For me, being set afire was merely the expectation of an inevitable conclusion. This fair world, compounded of uncountable beauties and enchantments and graces, inspired in me only one abiding fear, which was that I might live in it too long.

I WAS CAPABLE OF LOVE, BUT I LIVED IN SOLITUDE
after Father died. Therefore I loved only the precious dead, and books, and the moments of great beauty with which the city surprised me from time to time, as I passed through it in utmost secrecy.

For instance, sometimes on clear nights, in the solemn hour when most of the population sleeps, when the cleaning crews are finished and the high-rises darkle until dawn, the stars come out. They are not as bright over this metropolis as they must be over a Kansas plain or a Colorado mountain, but they still shine as if there is a city in the sky, an enchanting place where I could walk the streets with no fear of fire, where I could find someone to love, who would love me.

Here, when I was seen, my capacity for love earned me no mercy. Quite the opposite. When they saw me, men and women alike recoiled, but their fear quickly gave way to fury. I would not harm them to defend myself, and I remained therefore defenseless.

ON CERTAIN NIGHTS, BEAUTIFUL BUT SAD MUSIC
found its way into my deep windowless rooms. I didn’t know from where it came, and I couldn’t identify the tune. No lyrics accompanied the melody, but I remained convinced that I had once heard a
smoky-voiced chanteuse sing this song. Each time the song came, my mouth moved as if forming the words, but they eluded me.

The piece was not a blues number, yet it weighed on the heart as did the blues. I might call it a nocturne, although I believe that a nocturne is always an instrumental. Words existed to this melody. I was certain they did.

I should have been able to follow those mellifluous strains to a vent grille or a drain, or to some other route of transmission, but every attempt to seek the source ended in failure. The music seemed to issue from the air, as if passing through a membrane from another, unseen world parallel to ours.

Perhaps those who lived in the open would have found the idea of an invisible world too fanciful and would have dismissed the notion.

Those of us who remain hidden from everyone else, however, know that this world is wondrous and filled with mysteries. We possess no magical perception, no psychic insight. I believe our recognition of reality’s complex dimensions is a consequence of our solitude.

To live in the city of crowds and traffic and constant noise, to be always striving, to be in the ceaseless competition for money and status and power, perhaps distracted the mind until it could no longer see—and forgot—the all that is. Or maybe, because of the pace and pressure of that life, sanity depended on blinding oneself to the manifold miracles, astonishments, wonders, and enigmas that comprised the true world.

When I said “those of us who remain hidden,” I should instead have said “I who am hidden.” As far as I was aware, no other like me existed in that metropolis. I had lived alone for a long time.

For twelve years, I shared this deep redoubt with Father. He died six years earlier. I loved him. I missed him every day. I was now twenty-six, with perhaps a long, lonely life ahead of me.

Before I arrived, my father lived here with his father, whom I never had the honor of meeting. Most of the furnishings and books were handed down to me from them.

One day perhaps I would pass my belongings to someone who might call
me
Father. We were an enduring dynasty of the dispossessed, living in the secret city that the city’s people never saw.

My name is Addison. But back then we needed no names because we spoke to no one but each other.

Sometimes, with a smile, Father called himself It. But that wasn’t a real name. He called me Its It, or Son of It, which was our little joke.

By the standards of humanity, we were exceedingly ugly in a way that excited in them abhorrence and the most terrible rage. Although we were as much human as those who lived in the open, we did not wish to offend, and so we hid ourselves away.

Father told me that our kind must not be angry with other men and women merely because of the way that they treated us. They had anxieties we could never understand. He said that we of the hidden had our burdens, but those who lived in the open carried far heavier burdens than ours, which was true.

We also remained hidden to avoid worse than persecution. One night, my father was caught in the open. Two frightened, enraged men shot and clubbed him to death.

I did not harbor any anger toward them. I pitied them, but I loved them as best I could. We have all been brought into the world for some reason, and we must wonder why and hope to learn.

My little windowless residence also served as my school, where I sought to learn, and the most important of those three small rooms was the one lined with mahogany shelves built by my father’s father. The shelves were filled with books not wanted by those who lived in the world above.

Each of the deep, comfortable armchairs had a padded footstool. Beside each chair stood a simple wooden cube on which to set a drink, and a bronze floor lamp with a pleated shade of peach-colored shantung silk.

A small table and two straight-backed chairs provided a place to dine. In the days when we were two, we played cards and chess at that table.

These days, I occasionally played solitaire. I didn’t much like the game, but sometimes, shuffling the cards or dealing them out, I saw not my hands but instead my father’s. His fingers were deformed because they had healed improperly in self-applied splints after a minister had broken them on a Sunday night, when Father was a boy.

I loved those hands, which never harmed a living thing. The pale scars and arthritic knuckles were beautiful because they signified his courage and reminded me that I must never be embittered by the cruelties inflicted on us. He suffered more than I did, and yet he loved life and the world.

The table and most of the other furnishings had been brought here with difficulty or had been built in place by those who came before me.

For six years, I had not needed two armchairs. Most of the time, when reading, I sat in the chair that had been mine since I arrived there. Once in a while, however, I sat in Father’s chair, the better to remember him and to feel less alone.

Claimed by the Vikings by Dare, Isabel
Primal Shift: Episode 2 by Griffin Hayes
Surface Below: Dark Secrets (The Surface Below Book 1) by Leeah Taylor
Law of Attraction by Patricia Keyson
Tooth and Nail by Jennifer Safrey
Thornwood House by Anna Romer
A Lie for a Lie by Emilie Richards
The Young Lions by Irwin Shaw
The Dagger and the Cross by Judith Tarr
Forever We Fall: Broken #4 (The Broken Series) by Chloe Walsh
Our partner