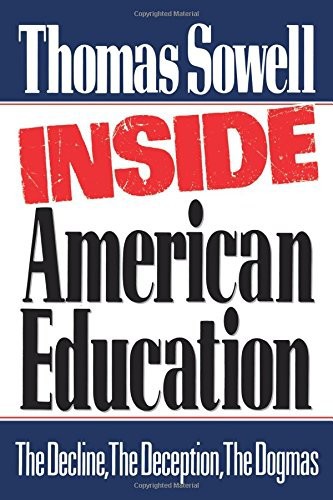 The Decline, the Deception,
the Dogmas

All rights reserved. No part of this book may be reproduced or transmitted in any
form or by any means, electronic or mechanical, including photocopying, recording,
or by any information storage and retrieval system, without permission in writing
from the Publisher.

Inside American education: the decline, the deception, the dogmas/
Thomas Sowell.

The author is deeply grateful for permission to quote extensively from copyrighted
material published in
The Public Interest
and in these sources:

For the first time in the history of our country, the educational skills of one generation will not surpass, will not equal, will not even approach, those of their parents.

Chapter 10: The Empire Strikes Back

L
IKE MANY
other people, I have long been appalled by the low quality and continuing deterioration of American education. However, after doing the research for this book, I am frankly surprised that the results are not even worse than they are. The incredibly counterproductive fads, fashions, and dogmas of American education—from the kindergarten to the colleges—have yet to take their full toll, in part because all the standards of earlier times have not yet been completely eroded away. But the inevitable retirement of an older generation of teachers and professors must leave the new trends (and their accompanying Newspeak) as the dominant influence on the shaping of education in the generations to come.

Much has been said about how our young people do not meet the academic standards of their peers in other countries with which we compete economically. While this is both true and important, their academic deficiencies are only half the story. All across this country, the school curriculum has been invaded by psychological-conditioning programs which not only take up time sorely needed for intellectual development, but also promote an emotionalized and
anti-intellectual
way of responding to the challenges facing every individual and every society. Worst of all, the psychotherapeutic curriculum systematically undermines the parent-child relationship and the shared values which make a society possible.

Parents who send their children to school with instructions to respect and obey their teachers may be surprised to discover how often these children are sent back home conditioned to disrespect and disobey their parents. While psychological-conditioning
programs may not succeed in producing the atomistic society, or the self-sufficient and morally isolated individual which seems to be their ideal, they may nevertheless confuse children who receive very different moral and social messages from school and home. In short, too many American schools are turning out students who are not only intellectually incompetent but also morally confused, emotionally alienated, and socially maladjusted.

At the college and university level, the intrusion of nonintellectual and anti-intellectual material into the curriculum takes more of an ideological, rather than a psychological, form. New courses, new departments, and whole new programs concentrate on leading students to preconceived ideological conclusions, rather than developing the student’s ability to analyze issues so as to reach independent conclusions. The particular subject matter of these ideological courses and programs may range from race to the environment or foreign policy, but the general approach is the same, not only in its fundamental anti-intellectualism, but also in its underlying hostility to American society and Western civilization, and the tendentiousness or even dishonesty with which it attempts to indoctrinate. Here again, the danger is not that these methods will succeed in achieving their goals, but that they will undermine or cripple education in the attempt.

V
IRTUALLY EVERYONE
has heard how poorly American students perform, whether compared to foreign students or to American students of a generation ago. What everyone may not know are the specifics of how bad the situation has become, how and why the public has been deceived, or the dogmas and hidden agendas behind it all.

The general decline in educational performance that began in the 1960s encompassed elementary and secondary education, as well as education at the college level. The evidences of this decline include not only results on a variety of objective tests, but also first-hand observations by teachers and professors, and dismaying experiences by employers who have found the end-product seriously lacking. The most widely known decline was in the scores on the Scholastic Aptitude Test (SAT). However, scores also declined on the rival American College Testing Program (ACT) examination, as well as on the Iowa Test of Educational Development,
1
and on a variety of local tests. As of 1991, only 11 percent of the eighth-grade students in California’s public schools could solve seventh-grade math problems.
2

Significantly, this era of declining academic performance has also been a period of rising grades. American high schools gave out approximately twice as many C’s as A’s in 1966, but by 1978 the A’s actually exceeded the C’s.
3
By 1990, more than one-fifth of all entering freshmen in college averaged A minus or above for their entire high school careers. At private universities, entering freshmen with averages of A minus or above were an absolute majority—54 percent.
4

Similar grade inflation has become common at the college level. Between 1958 and 1988, the average grade at Dartmouth rose from C to B. More specifically, the Dartmouth student body’s grade-point average rose from 2.2 in 1958 to 3.2 in 1988.
5
At the University of Chicago, the once common grade of C constituted only 15 percent of all grades by 1988—yet Chicago’s grades are considered “comparatively low” relative to grades at comparable institutions around the country. At Yale, for example, the proportion of grades that were A’s never fell below 40 percent during the entire decade of the 1980s.
6
At Smith College, likewise, A’s were 40 percent of all grades by the end of the 1980s—a tripling of the proportion of A’s over a period of 25 years—and A’s and B’s combined constituted more than 90 percent of all grades.
7
Rare is the college like Franklin & Marshall, where the student body’s grade-point average has remained consistently below B over the years.
8

Among the factors behind nationwide rises in college grades, in addition to more lenient grading by professors, have been such widespread practices as not recording failing grades on the student’s records, allowing students to withdraw from class when a failing grade is impending, and ordinary cheating. Between 1966 and 1988, the proportion of students cheating increased by 78 percent, according to a national survey.
9

These two trends—grade inflation and declining test scores—are by no means unconnected. Without the systematic deception of parents and the public by rising grades, it is highly unlikely that the decline in performance could have continued so long. The deeper question is—Why? Whose purposes are being served, and whose agendas are being advanced, as American education declines?

Perhaps nothing so captures what is wrong with American schools as the results of an international study of 13-year-olds which found that Koreans ranked first in mathematics and Americans last. When asked if they thought they were “good at mathematics,” only 23 percent of the Korean youngsters said “yes”—compared to 68 percent of American 13-year-olds.
10
The American educational dogma that students should “feel good about themselves” was a success in its own terms—though not in any other terms. A related educational dogma is that learning must be enjoyable to be effective. However, another international study found that a higher percentage of Japanese twelfth-graders disliked mathematics than did their American counterparts—but the Japanese did much better on mathematics tests.
11

When nearly one-third of American 17-year-olds do not know that Abraham Lincoln wrote the Emancipation Proclamation, when nearly half do not know who Josef Stalin was, and when about 30 percent could not locate Britain on a map of Europe,
12
then it is clear that American educational deficiencies extend far beyond mathematics. As for trends over time, perhaps the best-known and most revealing statistic is that scores on the Scholastic Aptitude Test (SAT), taken by high school seniors applying for college admissions, began declining in the early 1960s and did not begin to rise again until the early 1980s. This decline was gradual but steady, falling from a composite verbal-and-quantitative score of 980 in 1963 to 890 in 1980 and 1981.
13
Despite a small upturn, the average SAT score has never returned to the level it reached more than a quarter of a century ago. As of 1990, the average combined verbal-math SAT score was 900—10 points above the low of 1980 but still 80 points below the high of 1963.
14
As of 1991, the average verbal SAT score dropped to an all-time low.
15

Even these data do not capture the full story of educational disaster in American public schools. Members of the educational establishment often try to downplay such evidence by dismissing the importance of mere “facts” acquired by “rote
memory.” Unfortunately, as we turn from simple knowledge to more complex abilities in reasoning, the full debacle of American education becomes even more painfully clear. An international study of thirteen-year-olds showed that American youngsters fell further and further behind, the more they were required to
think
.