Read Inside the O'Briens Online 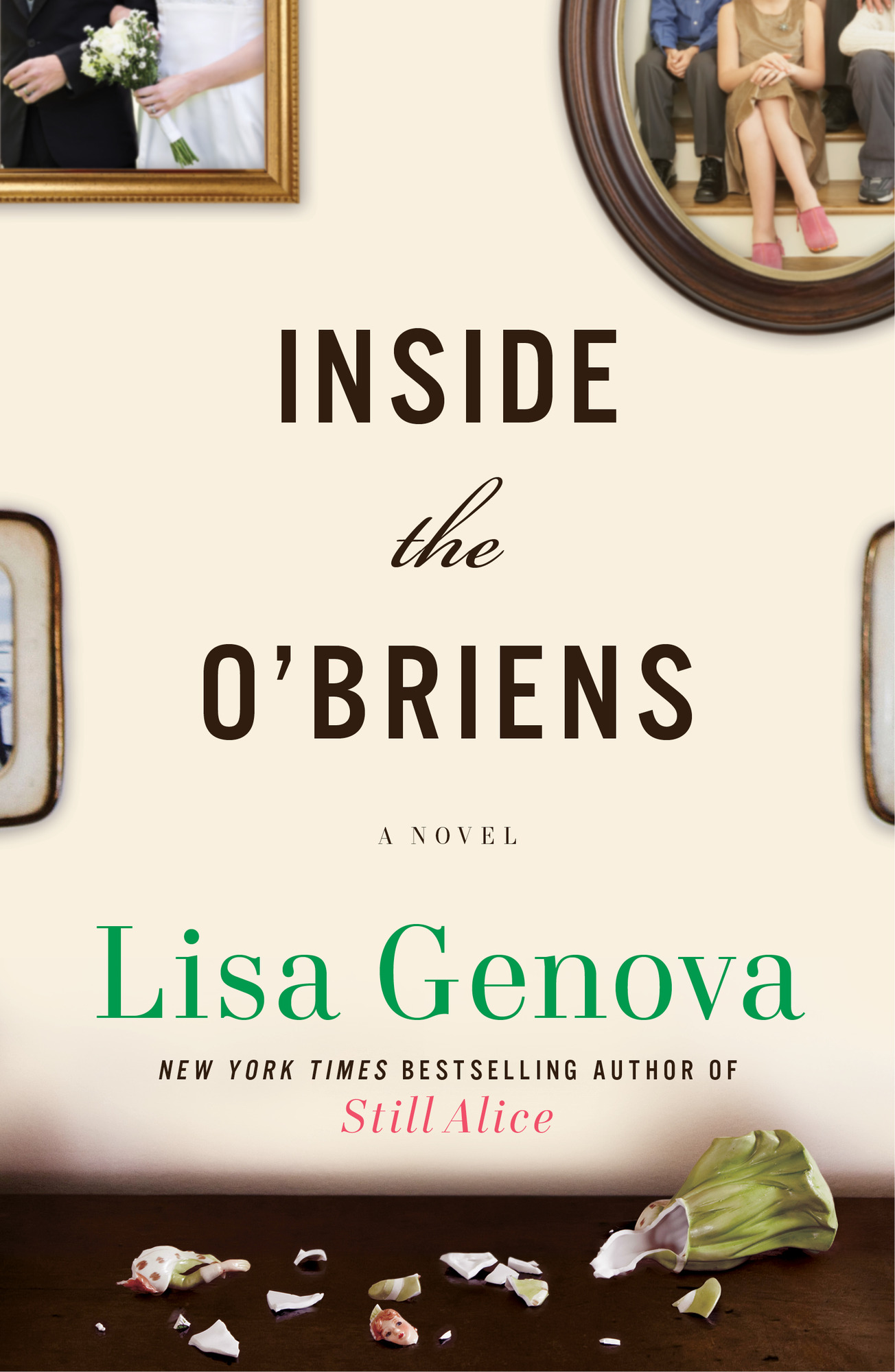 Sign up for our newsletter and receive special offers, access to bonus content, and info on the latest new releases and other great eBooks from Gallery Books and Simon & Schuster. 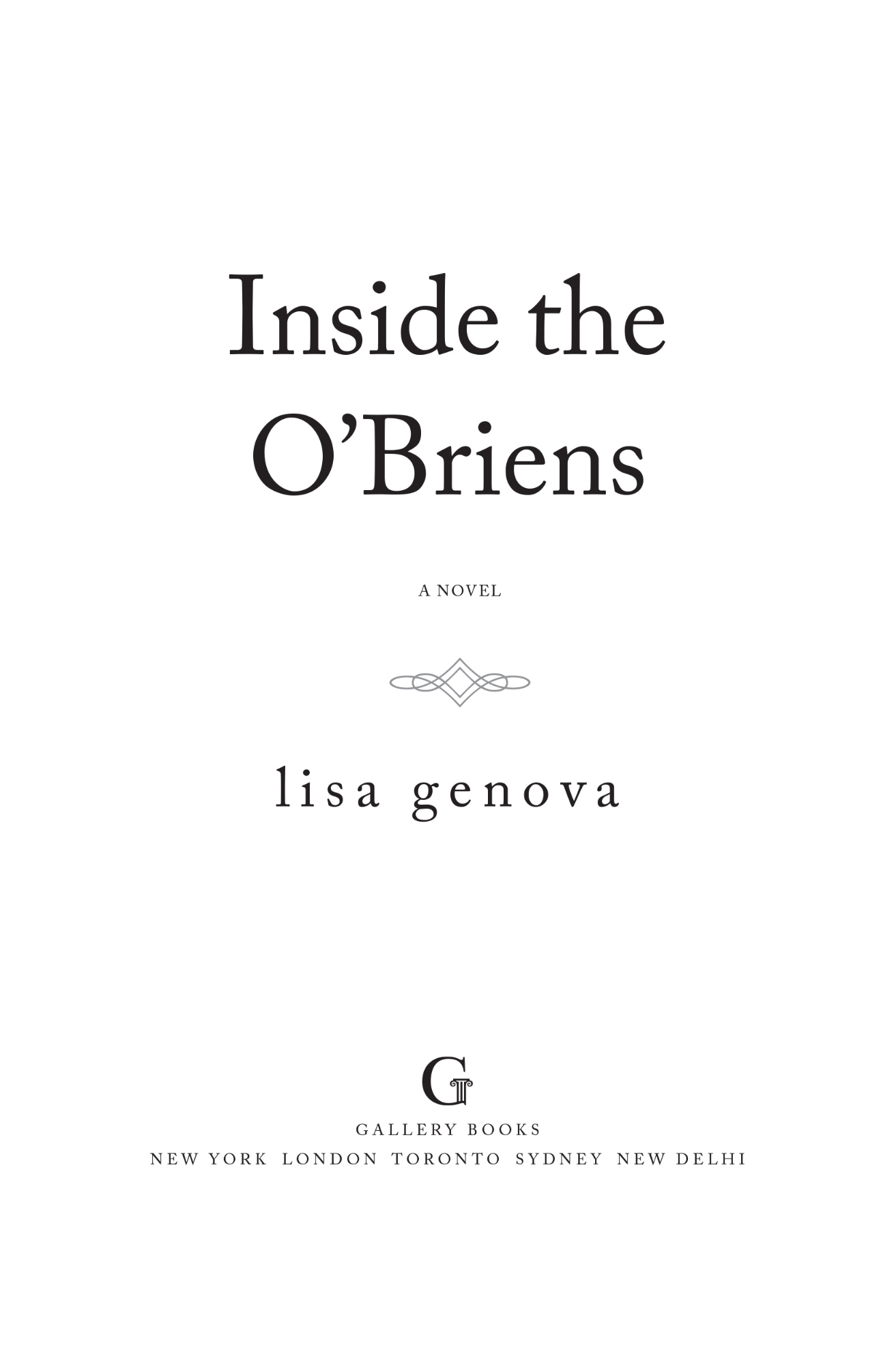 For Stella
In loving memory of Meghan

Once you can imagine these things, you can't unimagine them.

Huntington's disease (HD) is an inherited neurodegenerative disease characterized by a progressive loss of voluntary motor control and an increase in involuntary movements. Initial physical symptoms may include a loss of balance, reduced dexterity, falling, chorea, slurred speech, and difficulty swallowing. The disease is diagnosed through neurological exam, based on these disturbances in movement, and can be confirmed through genetic testing, as a single genetic mutation causes this disease.

Although the presentation of physical symptoms is necessary for diagnosis, there exists an insidious “prodrome of HD” that may begin up to fifteen years before the motor problems appear. Prodromal symptoms of HD are both psychiatric and cognitive and may include depression, apathy, paranoia, obsessive-compulsive disorder, impulsivity, outbursts of anger, reduced speed and flexibility of cognitive processing, and memory impairment.

HD is typically diagnosed between the ages of thirty-five and forty-five, proceeding inexorably to death in ten to twenty years. There is no treatment that affects the progression and no cure.

It has been called the cruelest disease known to man.

D
amn woman is always moving his things. He can't kick off his boots in the living room or set his sunglasses down on the coffee table without her relocating them to “where they belong.” Who made her God in this house? If he wants to leave a stinking pile of his own shit right in the middle of the kitchen table, then that's where it should stay until he moves it.

Where the fuck is my gun?

“Rosie!” Joe hollers from the bedroom.

He looks at the time: 7:05 a.m. He's going to be late for roll call if he doesn't get the hell out of here pronto, but he can't go anywhere without his gun.

Think.
It's so hard to think lately when he's in a hurry. Plus it's a thousand degrees hotter than hell in here. It's been sweltering for June, in the high eighties all week, and barely cools down at night. Terrible sleeping weather. The air in the house is a thick swamp, today's heat and humidity already elbowing in on what was trapped inside yesterday. The windows are open, but that doesn't help a lick. His white Hanes T-shirt is sticking to his back beneath his vest, pissing him off. He just showered and could already use another.

Think.
He took a shower and got dressedâpants, T-shirt, Kevlar vest, socks, boots, gun belt. Then he took his gun out of the safe, released the trigger lock, and then what? He looks down at his right hip. It's not there. He can feel the miss
ing weight of it without even looking. He's got his magazine pouch, handcuffs, Mace, radio, and service baton, but no gun.

St. Anthony, where the fuck is it?

He's tired. He worked traffic detail last night over at the Garden. Friggin' Justin Timberlake concert got out late. So he's tired. So what? He's been tired for years. He can't imagine being so tired that he would be careless enough to misplace his loaded gun. A lot of guys with as many years on the force as Joe grow complacent about their service weapon, but he never has.

He stomps down the hall, passes the two other bedrooms, and pokes his head into their only bathroom. Nothing. He storms into the kitchen with his hands on his hips, the heel of his right hand searching for the top of his gun out of habit.

His four not-yet-showered, bed-headed, sleepy teenagers are up and seated around the tiny kitchen table for breakfastâplates of undercooked bacon, runny scrambled eggs, and burnt white toast. The usual. Joe scans the room and spots his gun, his loaded gun, on the mustard-yellow Formica counter next to the sink.

“Mornin', Dad,” offers Katie, his youngest, smiling but shy about it, sensing that something is off.

He ignores Katie. He picks up his Glock, secures it in its holster, and then aims the crosshairs of his wrath at Rosie.

“Whaddaya doin' with my gun there?”

“What are you talking about?” says Rosie, who is standing by the stove in a pink tank top and no bra, shorts, and bare feet.

“You're always movin' my shit around,” says Joe.

“I never touch your gun,” says Rosie, standing up to him.

Rosie is petite at five feet nothing and a hundred pounds soaking wet. Joe's no giant either. He's five feet nine with his patrol boots on, but everyone thinks of him as being taller than
he is, probably because he's barrel-chested and has muscular arms and a deep, husky voice. At thirty-six, he's got a bit of a gut, but not bad for his age or considering how much of his life he spends sitting in a cruiser. He's normally playful and easygoing, a pussycat really, but even when he's smiling and there's that twinkle in his blue eyes, everyone knows he's old-school tough. No one messes with Joe. No one but Rosie.

She's right. She never touches his gun. Even after all these years of his being on the force, she's never grown comfortable with having a firearm in the house, even though it's always in the safe or in his top dresser drawer, where it's trigger-locked, or on his right hip. Until today.

“Then how the fuck did it get there?” he asks, pointing to the space next to the sink.

“Watch your mouth,” she says.

He looks over at his four kids, who have all stopped eating to witness the show. He narrows in on Patrick. God love him, but he's sixteen going on stupid. This would be just the kind of knucklehead move he would pull, even after all the lectures these kids have endured about the gun.

“So which one of you did this?”

They all stare and say nothing. The Charlestown code of silence, eh?

“Who picked up my gun and left it by the sink?” he demands, his voice booming. Silence will not be an option.

“Me either,” says Katie.

What every criminal he's ever arrested says. Everyone's a fuckin' saint. They all look up at him, blinking and waiting. Patrick shoves a rubbery slice of bacon into his mouth and chews.

“Have some breakfast before you go, Joe,” says Rosie.

He's too late to have breakfast. He's too late because he's
been looking for his goddamn gun that someone took and then left on the kitchen counter. He's late and feeling out of control, and he's hot, too hot. The air in this cramped room is too soupy to breathe, and it feels as if the heat from the stove and six bodies and the weather is stoking something already threatening to boil over inside him.

He's going to be late for roll call, and Sergeant Rick McDonough, five years younger than Joe, is going to have a word with him again or maybe even write him up. He can't stomach
the humiliating thought of it, and something inside him explodes.

He grabs the cast-iron skillet on the stove by the handle and sidearms it across the room. It smashes a sizable hole in the drywall not far from Katie's head, then lands with a resounding
BANG
on the linoleum floor. Rusty brown bacon grease drips down the daisy-patterned wallpaper like blood oozing from a wound.

The kids are wide-eyed and silent. Rosie says nothing and doesn't move. Joe storms out of the kitchen, down the narrow hallway, and steps into the bathroom. His heart is racing, and his head is hot, too hot. He splashes cold water over his hair and face and wipes himself dry with a hand towel.

He needs to leave now, right now, but something in his reflection snags him and won't let go.

His pupils are dilated, black and wide with adrenaline, like shark eyes, but that's not it. It's the expression in his eyes that has him arrested. Wild, unfocused, full of rage. His mother.

It's the same unbalanced gaze that used to terrify him as a young boy. He's looking in the mirror, late for roll call, glued to the wretched eyes of his mother, who used to stare at him just like this when she could do nothing else but lie in her bed in the psych ward at the state hospital, mute, emaciated, and possessed, waiting to die.

The devil in his mother's eyes, dead for twenty-five years, is now staring at him in the bathroom mirror.