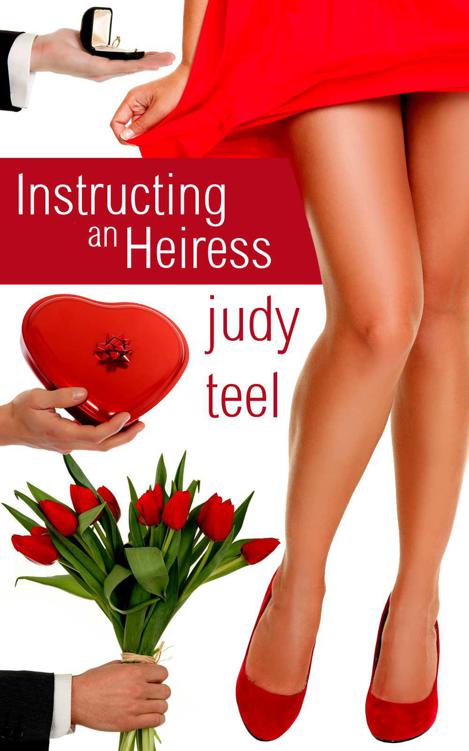 This book is dedicated to my wonderful husband, Kelly. Thank you for all the support you give me and for believing in my dream.

A special thanks to Joyce and Jennifer for critiquing and for their excellent insights. Also, a big thank you to Cynthia for being my beta reader and to Jan for her amazing typo-finding mojo. All of you ladies rock!

All rights reserved. Except for use in any review, the reproduction or utilization of this work in whole or in part in any form by any electronic, mechanical or other means, now known or hereafter invented, including xerography, photocopying and recording, or in any information storage or retrieval system, is forbidden without the written permission of the author, Judy P. Mills

This book is a work of fiction. Names, characters, places, and incidents either are products of the author's imagination or are used fictitiously. Any resemblance to actual business establishments, inventions, items, locales or persons, living or dead is entirely coincidental.

Find Judy Teel on the web!

Reality was not all it was cracked up to be, CK concluded as she climbed with bleary determination toward wakefulness. For one thing, she'd fallen asleep on her desk, again. For another, her invaluable but pesky assistant, Farley Blake, stood next to her radiating disapproval.

Early morning light slanted in through the large picture window that comprised most of her left-hand wall. Where the sunbeams touched, the wood paneling and rich, warm furniture of her office glowed with disgusting cheer. She screwed up her face and groaned.

"You did it again, didn't you?" Farley stated in her flat, no-nonsense tone. She frowned down at CK, looking chic and perky in a turquoise sheath dress.

CK sat up, rubbing her hand over her face while she attempted to regain consciousness. A bright pink post-it fluttered down and landed on top of the contract she'd used as a pillow. "Everything has to be perfect. Nothing can go wrong with this merger."

The pretty brunette gave an unsophisticated snort, dropped a white bakery bag into the middle of CK's antique mahogany desk and stuck a cup of coffee under her nose. The bitter, sweet scent of the almighty brew caused a few key areas of CK's brain to fire up.

"Thanks," she said, taking a grateful sip. "Are the Waylands still scheduled for one o'clock today?"

"You can't go on like this, boss." Farley moved around the desk to perch on the corner next to her. "You do nothing but work. You have no friends and no social life."

"I have you." CK focused her attention on extracting the heavenly sausage biscuit from inside the white bag. And joy, of joys, Farley had gotten a cheese Danish, too. "We've been friends for nearly five years, that ought to count for something. And what about Ryan?"

Farley quirked a dark, perfectly shaped brow. "He's certainly yummy if you have a taste for blondes who could pass as Greek gods, which I do, but guy friends don't count. I'm talking romance. Dating.
Boyfriends
. What are you saving yourself for? Old age?"

"I have a company to run," she said, instead. "Those things have to wait until after this merger. With the resources of Wayland and Son at Kazners' disposal, we'll be able to launch that European line I've been designing."

"Put some designing effort into yourself, for a change. You have a great figure. Don't hide it behind too big, black, shapeless suits."

"This is Italian, I'll have you know. Silk. Very pricey."

"And very unflattering. Let that curly auburn hair of yours down now and then. Maybe try a little lipstick. Men would be eating out of your hand."

"You are so living in the last century, girl." Farley leaned forward and plucked the cheese Danish from the bag.

Breaking it down the middle, she put the larger half back in. "Workman's comp," she said, taking a bite.

"For helping you with your social life."

"All you're doing is pointing out the obvious. That isn't helping."

"Slender and brunette, you mean?"

"Hmmm. The point being, he's got a thing for you. Even in that jacket." She popped the last bite of pastry into her mouth. "How's that for help?"

A small tremor of alarm pressed into her stomach. CK lowered her hand, the biscuit forgotten. "He does not. We've been working long hours together, that's all...." She narrowed her eyes at Farley. "What did he say?"

Her friend dusted off her hands. "It's not what he says, my dear. It's what he does."

CK handed her the other half of the Danish. "Spill."

"He follows you with his eyes."

"With that speculative look men get when they think a woman might be wife material."

A chill skipped across the back of her neck. She did not need this kind of emotional complication, especially with the Waylands. "You're crazy," she said, doing her best to sound convinced.

"Have you noticed how he'll reach across the table to pick up a pen or get a piece of paper and 'accidentally' brush the edge of your sleeve with his arm?" She bit into the pastry. "Classic."

CK resisted the urge to squirm. She liked Steve, she really did. But not like that. "You're giving him too much credit. Have you ever talked with him for more than a sentence or two? He's completely focused on his work."

"Maybe he's not consciously aware of it," her friend capitulated, "but that doesn't mean it isn't there. You should go out with him."

"He hasn't asked me."
Thank, goodness.

CK finished her coffee and tossed the cup into the trashcan beside her desk. "Now, if you'll excuse me, I have to get ready for the day. Is Ryan in, yet? I want him to go over the contract before the meeting."

"Has the day off, remember? Won't be in before this afternoon."

Slowly the caffeine from her coffee penetrated her brain cells. "Right. I forgot." Now that was certainly inconvenient. Oh, well, she couldn't begrudge him some time off. He certainly worked hard enough for it.

Farley leveraged off the desk. "Not so old and very hot from what I hear. Single, too."

"Down, girl." CK headed toward her private bathroom. "I'll be freshening up, so hold my calls. Business review meeting still at nine?"

"I moved it to tomorrow."

Something in the tone of Farley's voice made CK's stomach clench. She stopped and turned toward her. "He called, didn't he?" she stated, dread knotting into a hard lump in her gut.

Farley gave her a sympathetic nod. "He wants to see you. Demanded you go out to the house right away."

"He's gotten wind of the merger." CK's mind churned through ideas for accomplishing damage control. She could not let the Captain's antiquated ideas about what constituted a 'family business' keep her from solidifying the best thing that had happened to Kazners in fifty years.

She took a deep breath and tried to scare up some courage. "How did he sound?"

"Ryan will have to come."

"He's not answering his phone."

Going alone was certainly out of the question. Much too intimidating. "He knows the details inside and out. I need him there," she said, firmly. Besides, she told herself, Ryan had managed to avoid meeting the head of the Kazner empire for two years. Time he suffered with the rest of them.

Her friend grabbed the empty bakery bag off the desk in one hand and scooped the contract up with the other. "He's not going to like you dragging him along."

CK clenched her teeth and turned back toward the bathroom. "This is an emergency, Farley. What he likes is completely irrelevant."

Ryan left the woman sleeping in his bed and gingerly made his way through the passed-out guests cluttering his living room. Tossing his damp towel in the general direction of the angled, modern, soulless couch, he trudged toward the kitchen, raking his fingers through his damp hair as he went.

His cellphone started buzzing its way across the white counter, but his head hurt too much for him to give a damn. He'd put in for this vacation months ago and was in no mood to go in to work. He'd made enough of a concession agreeing to go over the contract with the Waylands that afternoon.

The phone stopped gyrating as he started measuring out coffee into the coffee maker. Whoever it was had finally gotten the hint. No sooner had the thought flashed through his brain fog, than the phone started dancing across the counter, again. Persistent little bugger.

Curiosity got the better of him and he glanced at the caller ID.

Annoyance prickled between his shoulder blades. She usually respected his space better than this, especially when she knew he had company. CK was dependable like that.

She'd always accepted him exactly as he was, unlike most women, which was one of the reasons their friendship had lasted so long. That, and the fact that he'd always thought of her like the sister he'd never had.

Two years ago when she'd contacted him to ask if he'd help her take Kazners to the top, there was no way he would have said 'no.' Even though it meant postponing his own dreams for a while.

A nagging guilt prowled around his conscience, making him tense. He couldn't ignore her, now, either. Whatever she was calling about, it must be important.

"I'm two blocks away in the limo. I'm turning into your neighborhood."

He gently massaged his temple where his blazing headache burned. "What, not even a 'Hi, hope I didn't wake you?'"

"Sadly, yes." He glanced longingly at the coffee pot. It stared serenely back at him, quiet as a church.

"I'll make a detour to that corner coffee shop," she said, as if reading his mind.

"You're the best. Now what can't wait 'til this afternoon?"

"As bad as my headache?"

"It could jeopardize the merger."

Which would delay his plans. Again. Frustration itched down his back. He was getting tired of delays. Even for CK's sake.

"Don't make me drag you out of there, Anderson," she teased, when he didn't say anything. "I'll step over bodies to do it, if I have to."

Ryan surveyed his living room. One of his friends, Ajax, staggered to his feet and stumbled his skinny butt toward the bathroom. The sound of him getting sick echoed through his apartment.

"I'll meet you at the curb." Ryan disconnected and reached for the bottle of ibuprofen beside the sink.