Read Intaglio: The Snake and the Coins Online

Intaglio: The Snake and the Coins 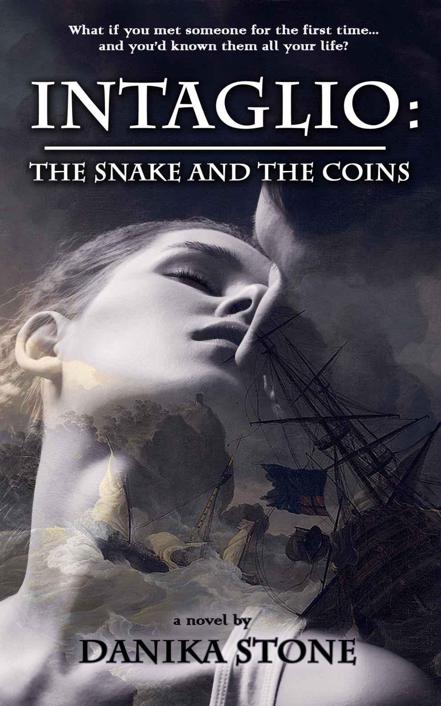 Intaglio: The Snake
and the Coins

All rights
reserved. No part of this book may be reproduced or transmitted in any form or
by any means, electronic or mechanical, including photocopying, recording or by
any information storage and retrieval system, without written permission from
the author, except for the inclusion of brief quotations in a review. This
publication is protected under the US Copyright Act of 1976 and all other
applicable international, federal, state and local laws, and all rights are
reserved, including resale rights.

This
book is dedicated to my two favourite DLs in the world.

To
D: for inspiring and assisting in the creation of this novel.

To
Deena: for being a ‘super golden’ friend, and the best sort of editor.

You
are BOTH the reason this happened.

“I
dream of painting and then I paint my dream.”

Ava was only taking the art
history class because she needed to complete three foundation courses before
graduation.  She hated listening to the droning speakers who’d never lifted
a brush in their lives.  Hated sitting in the dim amphitheatre and trying
to keep up with someone else’s opinion of “good” art.  It bothered her…
the dull repetitiveness and bland indifference that had nothing to do with the
elements which made her love art the way she did:  the aching glory –
ugliness or beauty or rage – given voice in the dark.

No, for Ava, art was about the
wash of colour on canvas tossed up in drunken fits of anger, dark and brooding
words, and the power they inferred.  Those gloriously lurid smears of
graffiti on train cars near the apartment where she’d grown up…
‘Freeze the
cans before you sneak out and you can blend them like a Renaissance fresco.’

These illegal canvases had been Ava’s first forays into artwork.

No, today she sat, her foot
kicked up in front of her, arms crossed, listening to some falsely cultured
academic tell her why this particular sculpture of a teenage David caused such
scandal. She blew a shaggy lock of blonde hair out of her eyes, breath hissing
in frustration.  The claims were, according to Professor Wilkins, the
artist had cast this figure from life.  At that, Ava snorted with
laughter, breaking the silence of the room.  (The effeminate sculpture of
the boy in the straw hat did nothing to impress her.)  The professor
glared at her, then continued talking, and the class moved on.

An hour later, she was walking
away from the class when another student jogged up beside her.  He was
tall and dark-haired, with the muscled body of a welter-weight boxer.
Most striking were his eyes: the pale grey irises, almost silver, ringed with
navy.  She remembered him from her art history class.
‘Shit
disturber,’
was the term that came to her mind.  He was always
arguing, giving Wilkins questions he couldn’t answer.
‘But how is the
Renaissance patron system any less repressive than the current
government-supported art centers?’
Ava liked that about him, though
the rest of him worried her for some reason.  He was intense, for one,
writing his notes in a tight, narrow script.  (Ava never wrote anything at
all, ignoring the prof and blustering her way through the exams.)  He was
a sculptor for another, and she didn’t quite “get” the methodical need to work
through a piece of stone.

She was all about the
present.  Paint and blood and lust.
The now.

“I agree with you about
Donatello,” he said without preamble.    Again the word popped
to mind: ‘
intense’.

“Yeah?” Ava answered without
slowing her steps.  She ran a hand through messy hair, eyeing him suspiciously.
“How’s that?”

Laughter – loud and unexpected –
bubbled from her chest.

“And how do you
really
feel about it?”

He laughed with her, and then
stopped walking, and for some reason she did too, an echo of his
movement.  They were the only people stopped in the busy hallway, the rest
of the world moving on around them.  For a second, there was an awkward
silence.

“Cole Thomas,” he said abruptly,
offering his open palm.  He had strong hands – sculptor’s hands – the
knuckles scuffed, skin dry like the stone he worked.

She smirked, wondering what this
intense young man who shared her dislike of Donatello would think of illegally
spray-painting train cars by night.  Part of her wanted to test her
theory.

She didn’t talk to him for the
next few days.  It wasn’t that she didn’t want to – Ava was curious about
this sculptor with the body of a Renaissance statue – but the next day she made
a rude comment about the blatantly male physiques of Michelangelo’s women and
the grey-haired prof called her on it.  Wilkins told her to stay behind.
After all the students were gone, he lectured her on attitude and classical
interpretations, shaking his fleshy fingers in her face and wheezing.  Ava
scowled, her mind offering different answers to the same questions.
Hoop
jumping and misogyny.
It angered her that she had to be in this
class.  But she’d been warned by the Registrar’s Office already, the three
foundation courses were a requirement, and no amount of complaining would
change it.

So she bit her tongue and stewed,
letting Wilkins’ rage blow itself out like a Spring storm.

The hallway was empty when she walked
out twenty minutes later, and that irritated her… and then she was annoyed at
herself for wondering about the young man’s absence.  She took the back
stairs out to the fire exit to the alley, smirking as she passed a series of
tags newly spray-painted along the cement walls.
‘You’re a fucking
anarchist, Morag...’
she thought, recognizing the handiwork.  She
straightened her backpack, kicking open the metal door, heading out into the
Autumn wind.  Eyes watering, she pulled her hands up inside her sleeves,
tucking her chin down against the cold.

Ava skipped class Friday, because
that’s what she did.  Friday night she went out to a hole-in-the-wall
nightclub and listened to some friends jam until the wee hours of the
morning.  The buses were no longer running when the session finally broke
up and she was drunk, effectively trapping her downtown. With no money for a
cab, and too tired to walk home, her foul mood was abruptly back.
Shivering, she headed over to the studio space she rented with Marcus and Suzanne
and a few other starving artists.

The studio wasn’t meant for
overnight use, and the super set the thermostat low. Ava curled into a small
ball on the couch, pulling her paint jacket overtop her leather one and a
drop-cloth onto her legs before letting exhaustion pull her into restless
slumber. In the last, half-conscious moment between sleep and wakefulness she
flashed first to the sculptor’s oddly-coloured eyes, remembering his last name:
Thomas
.  It seemed like she should recognize it for some reason.

Then she was suddenly gone –
vision awash with colours and shapes of endless beauty.  Mind able to
materialize all the things she wanted to paint, but was never adequately able
to express in the world of conscious thought.

Saturday morning, Ava awoke
buzzing with inspiration that had her skipping breakfast.  She had been
painting for an hour before she heard the first scrape of the key in the lock
downstairs.  It was Marcus – the long strands of his sandy blond hair
hidden under his knit cap – coming up the back stairs, stinking of pot.
‘God,
it’s ten in the morning,’ Ava
thought in chagrin, but she forgave him as
soon as he reached the top of the stairs.  He brought day-old muffins from
the bakery down the street and paper cups full of strong coffee which the two
of them shared. They stared at the wet shapes smeared onto the canvas, blue,
green and gold swirling together like the first hint of Spring.  There was
the beginning of a shape – a rippling swirl of blue – arcing upward across the
canvas.  A scattering of yellow splotches along one side.