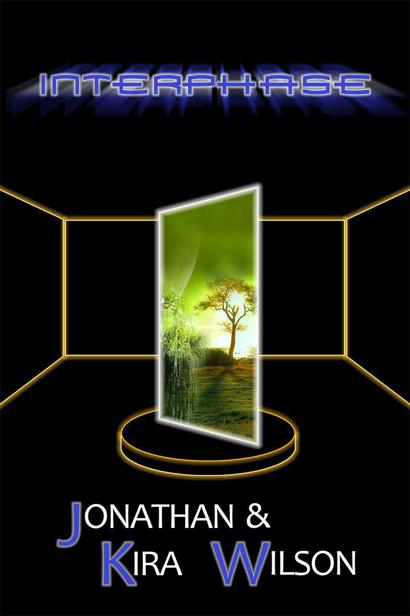 by Jonathan and Kira Wilson

Copyright 2012 by Jonathan and Kira Wilson

The awful truth hit us at 09:43 this morning when the final broadcasts went silent. Earth is a dead world now. The last pockets of civilization were wiped out in the final days of the damnable war. In the forty-three years since our launch, I can't count the number of times I've wondered if something, anything could have been done to prevent all of this. In the end, it doesn't matter. We're it now. The Phoenix-3 houses the remnant of the human race. It chills me to think how close we came to being destroyed by the assault that claimed the other five mission shuttles.

I gave a speech to the crew, telling them we have to look to the future, now more than ever. If we're going to survive as a species, then we must look out for one another. When this journey reaches its conclusion, we have to find a way to come together and learn from our past mistakes. If we fail, we will again face annihilation. This ship escaped the fire and gave humanity a second chance. I don't intend to waste it.

Just under two hundred years. That's how long it'll take to get where we're going, if our science officers are right. I'm going to live and die on this ship, but I gave an oath when I took the post. If all I succeed at is getting us a little closer to our new home, I won't have any regrets.

Log 4597-06: Continuation of previous entry. The training sessions have progressed, and the results have been most favorable. The Virtual Executive Regency Administrator program has shown a remarkable capacity for retention and application in multiple fields of study. Thus far, all of our expectations have been met and exceeded. She…

I must admit I find it strange how the program has anthropomorphized itself in the early stages of its development. It does seem… fitting that the underlying personality leans more toward the caring and nurturing aspects of humanity. Dr. Rush believes that such developments could have long term ramifications if encouraged without restraint, so for the time being we must all be cautious. We are designing the future of our world, after all. A world that shall finally be the dream of peace and safety we hoped for when Phoenix was first colonized.

When VERA is fully deployed, I hope
it
can quiet the murmurs of rebellion that have been heard in the corners of New Terra. We have only been here for thirty-five years, and already we begin to fall back into the sins of our forebears. I pray we can halt the decline of our race before the hopes of our future are lost forever.

Internal Network Journal Test, Second Attempt. Is this thing on now? Ah, okay. Well, the feedback continues to pour in. VERA's Network has been an amazing success, even bigger than I could have ever imagined! VERA herself sent me a message earlier, thanking me for the time and research our team has put into the project. The response from the general populace has been overwhelming, well, except for the New Pluto folks. I think they're a little sore that the unveiling of VERA's Network, or 'V-Net' as it's being called, has overshadowed the completion of the last of the Nine Cities.

I took a day for myself yesterday, to try things out, and for the first time I felt… free. Anything I could imagine was there, at my fingertips, waiting for the right programming to make it real. Well, as real as a virtual world can be. That's the really exciting part. The network is completely customizable to the needs and desires of its users. The neural transition process can take a little getting used to, but now that VERA can see how much this will benefit all of us, continued research and development is a sure thing.

I get the feeling our division is going to be very busy for the next several years.

Night lay upon the silhouette of New Terra like a gray, cloudy blanket. Gentle illumination drifted down from an ivory energy dome that arced over towering skyscrapers, outlining them against the sky. A wide track hung suspended in the air, fifty feet above street level, winding, curving and soaring across the entire cityscape. The city was empty except for a lone figure looking down at the streets from the raceway's starting platform.

David took in his surroundings with a critical eye and consulted the interface computer strapped to his left wrist. A holographic projection screen appeared in front of him. He scanned the available commands and tapped an option. A cool breeze rolled across his face. Perfect.

Environment and background stable and complete. David marked another item off his mental checklist.

Another sequence of screen taps loaded a racing hover-bike at the starting line, and he examined the large, silver-bodied machine. It was shaped like an old Earth motorcycle, with twin hover engines humming where wheels would have been. The handlebars were set deep in the nose, allowing the rider to lay parallel to the road for maximum speed.

David climbed onto the bike and tested its feel and weight. He pressed a button on the dashboard, and plating slid up and over his lower body. The windshield extended over his head and back. The hover engines engaged and lifted the bike a foot off the track. Gravitic guardrails edging the length of the course powered up with a low hum that rippled across the city.

Nodding to himself, David marked another item off the list. He gazed down the opening straightaway, and his grip tightened on the handlebars. Temptation crept in, enticing him with the challenge of speed ramps, hyper turns and 360 degree rollovers—

With a frustrated sigh, David shut down the bike and pried himself loose from its snug grip. There wasn't time for that, not if the module was going to be ready for
him
by the deadline.

"This program of yours… I like it. I want one. You're gonna make a special one just for me, or I'll burn your connection to the ground and laugh at the ashes."

The sudden jolt back to reality, as David remembered the last five sleepless nights, brought a growl to his throat. With a pair of angry flicks he unloaded the bike and activated the control platform.

The silver disc materialized in front of him. He stepped on and waited for the railing to rise from the platform. The command console blinked on, and he tapped a short sequence of buttons. The disc rose and floated over the course toward the first control array.

David cast his gaze across the vista of his creation. Despite the frustration at the situation, his pride swelled. The module was a masterful piece of programming, and it saddened him that he wouldn't see it again after tomorrow.

The control platform drifted higher, and a gust of wind howled past his ears. The first array sphere lay ahead, a freeway intersection of faint blue light-streams that flowed into a globe just above the virtual pavement. He maneuvered the platform to the array's control point and brought up his wrist interface. He launched the program compiler and watched with satisfaction as the data streams pulsed. One by one the lines flared and went solid, indicating they were locked into the array.

The compiler finished, and a shimmering pulse fired down the track toward the starting platform, saving the data to his personal computer back in reality.

David typed in a new destination, and the platform started toward the next array. Out of nowhere, a roaring gale filled his ears, and the disc rocked as if struck by an invisible hand. He seized the railing and fought to steady himself. Slowly the platform calmed, and he regained his footing.

The disc continued, and David noticed the air had gone still. He checked the program parameters for environmental glitches, keeping one arm hooked securely around the railing. No anomalies detected. He frowned; the deadline was early tomorrow. He thought he had coded everything correctly, but if the module was bugged in any way…

Light flashed in the corner of David's vision. An instant later a gust slammed into the disc and hurled it down several yards. He slipped and grasped at the rail with both hands to prevent a fatal fall. Clutching the rail in a death grip, he struggled to pull himself up. Another flicker caught his eye, and he looked toward the horizon.

Less than a mile from his position, a mass of roiling clouds raced toward the city, throwing lances of white fire with blind fury. The air distorted around the swell; it blazed through the virtual atmosphere.
A Crash Storm
.

David hauled himself onto the platform. Stories about a Crash Storm's destructive power had circulated V-Net for years. They appeared without warning, were impossible to predict or track, and could rend a mid-sized module to code fragments within minutes.

A spear of lightning arced over the disc. Another bolt blasted a crater into the racetrack below, charring the area and pelting David with chunks of debris. He could see the next control array. He had to lock down what he could.

He directed the platform to the collection of data streams. Some now showed black instead of blue, but most were intact. With one arm wrapped around the railing, he struggled to keep his hand steady over the control screen. The air reverberated with thunderclaps. Lightning streaked by his elbow, so close that the heat singed his skin. The compiler finished its task, and David, wincing with pain, saved the program section to his computer.

The platform moved toward the final array as the inner wall of the storm loomed above. Lightning cascaded across the sky and ripped over the disc's path. Helpless in the air, David took manual control of the platform and plunged down. He ducked underneath the track and accelerated to top speed.

His ears ached from the booming thunder as he hurtled into the heart of madness. Like an invading army bent on razing an enemy city, the Storm heaved lances of electric death at the racetrack, skyscrapers, even the streets and alleys below. Wild bolts tore into the track and showered him with fragments of charred pavement. Just ahead, a full section of the raceway broke free and plummeted to the ground, rocking the disc with a brutal shockwave.

David raced across the open gap and hoped luck would see him through unscathed. The other side loomed near. Suddenly, the air blazed with heat and energy. A lightning bolt struck and shattered the platform beneath him, hurling him from the disc. The ground rushed up at him, and he raised his hands instinctively—

A faint whine filled David's ears, and he found himself on the starting platform. His railguard sub-routine had worked as intended and returned him to the beginning. Without warning, lightning tore down his shoulder and crushed him to the ground. Pain and numbness cascaded through his body, the sensations warring with one another. Another bolt scored the pavement less than a foot away. He stared blankly, pelted by fragments that turned shapeless and opaque.

The Edge of Tomorrow by Howard Fast
Southern Poison by T. Lynn Ocean
The Storm of Heaven by Thomas Harlan
The Farpool by Philip Bosshardt
Quinn by Ryan, R. C.
Unknown by Unknown
Waking Up in Vegas by Romy Sommer
Amy Butler's Style Stitches: 12 Easy Ways to 26 Wonderful Bags by Butler, Amy
Scoring by Mia Watts
Erin's Way by Laura Browning
Our partner