Interrogative 01: Tiago and the Masterless 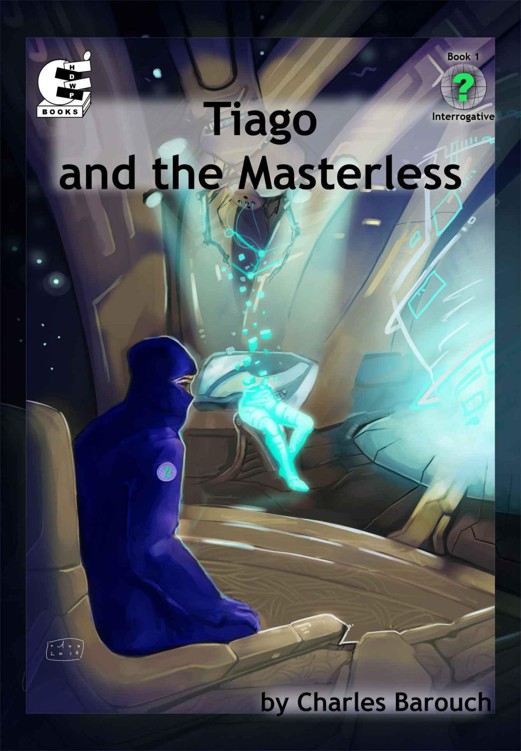 Tiago and the Masterless

Dedicated to my wife, Sydney Barouch.

She's fighting cancer and I'm keeping my million word promise to her.

Syd, this is a down payment.

Tiago and the Masterless © 2014 Charles Barouch

Station Positions on the Interrogative Bridge

The loneliness is getting to me. I'm finally sure that they aren't following anymore. That means I'm safe. It also means I'll never be among my own kind again. I can accept that. Still, I crave real people – no matter how loosely defined – for interaction. Computer sims can only substitute for so long. Today, I begin scanning for signs of intelligent life. It is time to find a planet.

Tiago muttered to himself as he moved from station to station on the bridge of the
Interrogative
. He could just stay in the captain's chair and summon up each display, but movement was needed. He'd spent too long sitting still these past months. He'd actually lost weight on the journey, but he'd lost muscle tone as well. That weakness would make returning to planetary gravity hard. Unless he wanted to live the rest of his life puttering around on the ship, exercise was a must.

The life science station readout showed one hundred percent efficiency. He would have been surprised to see anything else. The ship was designed to hold close to two thousand colonists and over a hundred crew. It had no trouble keeping one person's air clean and belly full. He scaled the systems back even further than he had the last time he'd tinkered with them. There was no reason to manage the air shipwide when he was only using parts of three decks.

Somehow, closing down some of the atmo made the ship feel smaller to him. Sitting on the bridge put him a the center of a ship with a three mile diameter. Contemplating the immensity of
the
ship made him feel like it was crushing in on him. It was irrational but he couldn't get past it. When he'd first escaped Lossgren, he'd started exploring. Tiago didn't do that any more.

Engineering showed the hydrogen collector had shut down because the tanks were full. Tiago was in no danger of running out of fuel. The
Interrogative
had enough to make it to the edge of this solar system and back several times. For extra-solar travel, he'd have to risk high warp, despite having no coordinates.

He continued his march through each of the stations, collecting good news at each point, until he came to the long range scanning console. He'd saved it for last. It was quiet out there. Yes, there was "the song of the universe", the slang term which referred to the background radiation and random radio signals which permeated space, but there was no 'intelligence pattern'. After nearly two standard years on the ship, a full six hundred and eight days out from his home world of Earth, Tiago was desperate for company.

He ran his hand through his wild hair. It reminded him that he needed to wash more frequently if he was going to be in public. In his time on board, he'd lost a lot of social habits. The ship's computer didn't care. The sims did – they were programmed to reinforce all sorts of social norms – but he only used one of them anymore, and he'd rewritten much of her code.

His hair wasn't just dirty, it was long. He'd never let it grow out before he started running. Aboard ship, his formerly neat buzz cut had sprouted into a flowing, black and gray choppy mess that brushed his shoulders when he turned his head. He'd last cut it a month ago, hacking off just enough to get it out of his way. His old, precise habits of appearance had fallen out of use.

How he lived now was a marked change from that desperate first month in many other ways as well. Things were leisurely now. He could let one day simply drift into the next. It was dreamlike, surreal. In space, there was no one to impress with his diligence and meticulous work. Without an audience, those things fell away.

At the beginning of the journey, he had one: Not exactly an audience, but people paying attention to what he did. He spent every one of those first thirty days dodging attacks from the ships which followed him. By day thirty two, as he marked the new month, only one ship remained on his tail. Captain Lossgren took the theft of the Interrogative personally. Finally, Tiago had to engage high warp in order to escape. He knew that even Lossgren wouldn't pursue. Unlike Tiago, Lossgren needed to know that he could get home. So, escape was achieved, but the
Interrogative
ended up in a place without prior referents, a place for which there there were no charts preprogrammed into the ship. Still, he did not trust completely in his evaluation of what Lossgren would or wouldn't do. He kept running.

A jump from anywhere within a day's sublight travel out from Earth would have been a jump into known areas. Two days out, only a few points were documented. He jumped from much further out than that, and he didn't stop with just one jump. Fear drove him. Once fear was gone, a new need kept him using high warp. Any jump that left him too far from a star – stars are perfect hydrogen sources – forced him to jump again. Keeping the ship well fueled for sublight was a priority. Once he spotted this system, he was content to travel inward on sublight drive, at a leisurely eight hundred seventy-five klicks per hour. The past two hundred or so days had taken him from his high warp arrival point to where he was now, midway into the system.

The navigation computer had run every chart it had against the new sky, finally confirming that he hadn't found an alternate jump to a known point. That had happened before -- finding a second path -- but not this time. This was an entirely new place. Long range scans – he had time to run plenty of them – gave a point one five six percent match on one distant cluster which might be at the far edge of one recorded chart. Without knowing the angle relative, it was little better than a guess. Tiago was likely the first Earthman to ever see these stars this close.

The cafe was crowded. Tiago had wanted to meet at the bar instead, but Quintrell was sure it was being watched. Keeping a fake smile plastered on his face, Tiago watched three young girls, all dressed in identical long black dresses, slip into the seats by the back wall. That's where he needed to sit. That's how Quintrell would know who he was. Since when was this place so busy?

Nursing his double espresso, Tiago leaned against the wall near the occupied table. He scanned the crowd despite having no idea what the other man looked like. It occurred to him that it might not be a man. One of those over-somber-looking table thieves might be his contact. The tap on his shoulder nearly caused him to fling the cup all over the floor.

Tiago gave his new companion a quick glance. He was dressed in a burqa, which was typical for a large percentage of the males here in Brazil. It was dark brown, and the way it hung on his frame made Tiago think of a scarecrow. He'd rather have been right about Quintrell being one of the girls.

"Quintrell. You are exactly as I imagined you," Tiago said.

Tiago had just met the man and he already wanted to kill him. The cafe was Quintrell's idea. Why ask him there, just to insist they leave? Quintrell turned the corner and disappeared. A hand came out of nowhere and grabbed Tiago by the arm, pulling him into a standing cocoon.

"Functional invisibility. Partial sound deadening. We need to do this quick, before someone accidentally walks into us." Quintrell whispered. "On a related note, lean into the wall behind us. We need to take up as little sidewalk space as possible."

He woke to the insistent buzz of the forward scanner. Tiago hadn't realized he had fallen asleep until he awoke. He was still on the bridge.

Brushing the hair out of his eyes, he started calling up the stations from where he sat – not yet clear-headed enough to walk over to each one. The computer showed him a blue-white planet. It was an estimate, not a live feed, because the planet was on the far edge of normal sensor range. Below the image was a series of readings which confirmed radio activity. Intelligence pattern – confirmed.

He rubbed his eyes and pulled himself unsteadily to his feet. With a force of will, Tiago walked away from the console. He shook his head to clear it. There might be people. He wanted to just sit there and stare at the data – at the possibilities manifest in the data – but that wasn't productive. What he needed to do now was figure out how he felt about the data.

It was one thing to hope for contact; it was another to risk it. They could be monsters. They could be brutal savages. Worse, they could be the sort of highly evolved savages he was fleeing. He needed to think about this.

The wash basin in his quarters was as good a destination as any other. He walked down the long corridor. To clear his head, he counted the doors as he went past. There were thirty-two crew cabins along this one corridor. The Captain had the last one, which was also the biggest.

Tiago headed for the bathroom. He spent a long time scrubbing his face and hands. It wasn't just normal washing, it was a ritual behavior from childhood. In his country, it was considered an insult, in formal situations, to touch another person without washing all exposed skin first. Sighting that unknown planet snapped him into 'receiving guests' mode. He washed, he showered, he cut his hair and then shaved what was left until he was entirely bald. He changed into clothing which covered nearly every inch of his skin. The garment had a mild blue gradient, fading to white near the ankles. The only decoration on it was a mission patch on the right shoulder. It was the only part of the Future Defense uniform which he liked. The patch was just some crossed lines over a question mark, enclosed in a circle. It was designed to designate crew status on the
Interrogative
. Tiago finished the outfit off by tying a gray-gold sash around the waist.