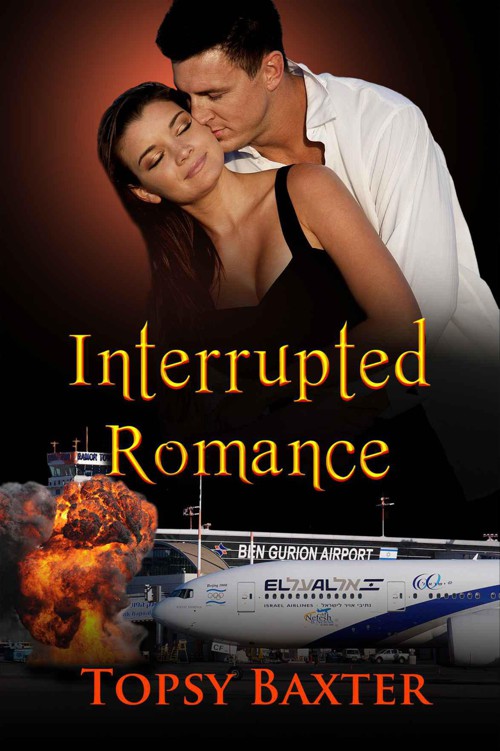 For my daughter, Kylie, without whose trust, expertise and belief in me, this book would never have seen the light of day
.

Names, characters, places, and incidents, other than those clearly in the public domain, are the product of the author’s imagination or are used fictitiously, and any resemblence to actual persons, living or dead, business establishments or events is entirely coincidental.

No part of this book may be reproduced, scanned, or distributed in any printed or electronic form without permission.

Please do not participate in or encourage piracy of copyrighted materials in violation of the author’s rights.

Tel Aviv airport was a busy place, as four aircraft had landed one behind the other.

Dafna moved closer to the luggage collection sector designated for her flight, watching the way people jostled for positions close to the moving conveyor.

She hated being caught in crowds.

A strong hand grabbed her arm, forcefully pulling her backwards.

Dafna spun around and stared, surprised and angry, at the man behind her.

His hand was still grasping her arm and as she tried to jerk it loose, her mouth opened in outraged fury.

But before she could demand what he thought he was doing, an explosion shattered the afternoon bustle.

Dafna was thrown to the ground as the blast knocked her sideways, along with scores of others.

Flames erupted from the baggage collection zone and hot metal tore through the air.

The people closest to the explosion were either torn apart or horribly burnt, in an instant.

It had been detonated somewhere in the moving luggage, or under the conveyor.

For several seconds after the blast there was no sound at all, but then she heard them… the screams, the shouts, moaning, crying, pleading.

A young mother, who had been sitting with her twin two year old boys in front of Dafna on the plane, rushed past her with a torn and tattered child in her arms, her mouth wide open in shock.

Beside Dafna, half laying across her legs, the man who had tried to drag her backwards was covered in blood.

He turned towards her.

She could see him staring, unseeing, in horror.

She passed out just as she became aware of pain.

All this came back to her as she lay in the hospital ward, recovering from the injuries caused by flying debris.

Severe burns, and the destruction of flesh and bones by flying shrapnel, had been the causes of most of the deaths and major injuries sustained.

Fortunately for Dafna, her injuries were minor compared to those of some of the other victims.

Her forehead, along the hairline, had been torn open when hit by an airborne object.

This had needed fourteen stitches to pull the damaged flaps of tissue together.

Also, she had suffered concussion and memory loss, which had lasted several days.

Her face showed the effect of the battering and was badly bruised.

It had taken some time to recollect all the details of that day, but she felt able to withstand the police interview, which had been scheduled for the afternoon.

The police were piecing together every bit of available information from the survivors of the explosion.

The plane had landed with a bump at Ben Gurion Airport, outside Tel Aviv, amid a flurry of activity from passengers anxious to collect belongings from the overhead lockers.

Coats and hand luggage and books were hurriedly secured on laps, happy voices chatting to neighbours about who was to meet them at Arrivals.

The cabin crew had tried throughout the flight, unsuccessfully, to keep the passengers in their seats, to keep the aisles clear for the trolleys of meals and drinks.

For Dafna, it had been amusing to watch the in-flight activity, as it seemed that everyone on board wanted to walk up and down the aisles.

It was obviously the way Israelis came home, joyfully and good-naturedly blocking the crew's progress ever since the El Al flight had left Rome.

Compared to the flights she had taken over the past three years aboard Australia's national airline, Qantas, these were novel events.

The Qantas passengers rarely left their seats, unless it was to move to the washrooms at the rear of the economy class section, or to take a stroll around the plane every three or four hours to stretch their legs.

The struggle to be first at the baggage collection area was no different to any other airport, and as Dafna waited… and waited… she took time to watch her fellow passengers bustling for a position close to the moving baggage conveyor.

They were mostly young people returning from holidays in Europe, a few families with small children, some fretful and tired, and a smattering of businessmen in a hurry to return to the office, the phone, the computer… and maybe to the wife.

The long journey from Australia had tired her and she drew herself up, smoothing back her shoulder-length black hair.

Her dark eyes and olive complexion were not noticeable different to other women in Israel, but beauty shone from her face.

With her healthy skin and a slightly amused expression, she enticed people to smile back at her.

Her smile was a credit to her uncle, the dentist, and showed white, even teeth.

At twenty-four years old, she was a happy, well-adjusted woman, with a business of her own, albeit inherited from her father following his death two years before.

The book shop was where she belonged.

Where she loved to be.

It was always a busy shop, filled with people who loved to browse among the titles, carefully choosing what they wanted to read.

She was daydreaming about the new titles due in the next day, when the man next to her grabbed her arm.

The bruising on her face gradually diminished.

There was a scar running along her forehead, at the hairline, which would fade with time.

The concussion had gone, but the memory… never.

The man who had tried to pull her away had survived the blast.

One of the policemen who interviewed her was able to tell her that much.

He was in another hospital, still recovering, as his injuries were more serious.

His name was Adam Lavan.

Following her discharge from hospital, Dafna checked that the book shop was running smoothly without her, (thank goodness she had chosen wisely when recruiting new staff two years ago).

The police questioning was over and she had told them all she could remember of the bombing… practically nothing.

She stayed at home for a further week before deciding it was time to find Adam, to thank him for saving her life.

His name would be in a telephone book, somewhere.

It would take hours of searching the phone books herself, so she turned instead to the Internet via her computer.

Finding the listing was easy.

A thirty minute drive took her from Netanya, by the sea, to Tel Aviv.

The address turned out to be over a sports store.

As she stood outside the address, across the street, she wondered what she would say to someone who nearly lost his life saving hers.

What damage had he sustained?

She cursed herself for not asking more questions when she had the opportunity.

'Well, there's only one way to find out' she thought.

She crossed the street and entered the passageway and looked up at a flight of steep stairs.

The stairs were clean and painted a soft cream, a nice contrast to the pale blue walls.

As she walked along a short corridor to the door of Apartment 2, she hesitated… will he know me?

Will he even want to talk to me?

The door opened after a few moments, startling her as she hadn't heard footsteps approaching.

Can I help you?" said Adam.

His left arm was in a sling, he was favouring his left leg which showed the marks of many stitches, recently removed.

But they were nice legs, Dafna decided, as she slowly looked up at him.

He was tanned, fit, tall, and wearing only a pair of crumpled shorts.

Dafna realised he must be about 190 cm tall.

His expression was puzzled, even vague.

He stood waiting patiently for her to speak.

He nodded slowly, once.

"My name is Dafna Zoreff.

I've come to thank you for saving my life at Ben Gurion."

He hesitated a moment and then extended his right hand in her direction.

She took it and he shook her hand briefly, released it slowly and stepped back from the door, saying, "Please come in, but excuse the state of the apartment.

I haven't been able to tidy up much lately."

Dafna walked into a white room.

The floor was tiled with large white tiles, the walls were painted white, most of the furniture in this living room was white leather.

The colour came from the scatter cushions, brilliant blues and golds, most of which were on the floor.

He'd obviously thrown them there so as to stretch out on the lounge.

A beautiful rug, again in bright blues, covered much of the entrance to the room.

This had softened the sound of his approach.

It was the reason she hadn't heard him coming.

May I help?" Dafna replied.

"Actually, yes, you may.

I don’t see too well at the moment,” Adam said.

At this, Dafna turned quickly to look again at his face.

She watched as he tentatively made his way to a low coffee table in the centre of the rug, felt about a moment, then picked up an eye patch.

He struggled to put the black eye patch in place with his one free hand.

After a short time, he succeeded in covering the fine lacing of scars around his left eye.