Read Into That Darkness: From Mercy Killing to Mass Murder Online

Into That Darkness: From Mercy Killing to Mass Murder 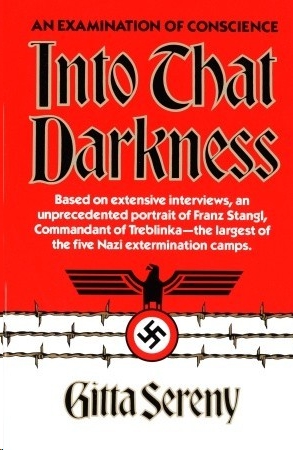 To Don
and to our children Mandy and Chris,
and to Elaine

The power of choosing between good and evil is within the reach of all.

The People Who Speak

I am indebted to many people and organizations for their help in the preparation of this book.

Of the latter I must thank first and foremost the German judicial authorities who gave me access to Düsseldorf prison and Franz Stangl, and particularly the Governor of the prison, Herr Eberhard Mies and his wife, for their kindness throughout those strenuous weeks. I am grateful too to the Polish authorities for their help in Poland, and the Austrian Ministries of the Interior and Justice for their assistance in Vienna.

Chief Prosecutor Adalbert Rückerl, Director of the Central Authority for Investigation into Nazi Crime, in Ludwigsburg, and his colleagues have spared no effort to assist me ever since my first research into this subject for a series of articles on the Nazi crime trials for the
Daily Telegraph Magazine
in 1967.

The Institute for Contemporary History in Munich, and in particular Dr Lothar Gruchmann from whose work on Euthanasia in the Third Reich I quote in this book, provided a wealth of documentary material. I also thank the West German Bundesarchiv in Koblenz.

I am particularly indebted to the Wiener Library in London and to their extraordinarily knowledgeable staff. I don’t think any serious book on National Socialism could be undertaken without the help of this unique institution.

The two men in West Germany who I believe know more than anyone else now about specific Nazi crimes are Chief Prosecutors Alfred Spiess and Kurt Tegge. Kurt Tegge has spent years on the Einsatzgruppen trials in Hamburg, and Alfred Spiess prosecuted both in the Treblinka trial and the Stangl trial in Düsseldorf. I am grateful to both of them for so liberally sharing their knowledge with me. No formal expression of gratitude could possibly do justice to the amount of practical help and advice I had from Alfred Spiess. Neither of these men, of course, necessarily share my opinions or my evaluation of the individuals I discuss in this book.

I thank Count Eduard Raczynski, former Foreign Minister of the Polish Government in Exile; Mr Adam Ciolkosz, former Socialist Member of Parliament in Poland; and M. Kazimierz Papée, former Polish Ambassador to the Holy See, for their interest in this book and for their considerable help. Equally I thank Vienna City Counsellor Herr Hubert Pfoch for allowing me to quote his extraordinary wartime diary and the use of the photographs he took as a courageous young man in Poland.

A special word of thanks to Horst Münzberger who permitted me to gain insight, and briefly to share with him, a staggering human conflict.

I also want to thank in this particular section of the acknowledgments a number of men and women who consented to talk to me but asked not to be quoted, or for whom it would obviously have been damaging to be named.

I owe thanks to many of my friends for their concern for me during the years I worked on this book.

Above all perhaps to Ruth Alice and Klaus von Bismarck and their (many) children and young relatives. Theirs is the new Germany which I love and trust: it is my luck to have them as my friends.

To Catherine Valabregue for sunny breaks in France and for our home from home in Paris. To Mädi and Hansibert Törring for their ever-open door and the lovely peace of Seefeld on so many occasions. To Sally and Philip Dowson for the constant reassurance of their friendship. To Ronald Preston for his unstinting help. To Amador Aguiar in Brazil, whose interest reinforced my belief in the universal application of the problems this book is concerned with.

My gratitude (again) to John Anstey, Editor of the
Daily Telegraph Magazine
, for his unfailing receptiveness to complex and often controversial ideas.

To Nina van Pallandt and to Enrique Arias for their encouragement after ploughing through a rough draft; and to Paul Neuburg at the same stage for his particularly valuable criticisms, every one of which was justified.

To Alice Hammerstein Mathias for her research in poetry – and for finding exactly the right words in Carlyle and – above all – Origen.

I want to thank my old and dear friend Paul Palmer for his faith in a very young writer years ago: this, I think, may be the book he meant.

Diana Athill edited
Into That Darkness.
She has lent it – and me – her warmth, her intelligence, her literary fluency, and a quality of involvement I had little right to expect. I am grateful that she has become my friend. And I also thank my American editor, Berenice Hoffman, whose perspicacity saved me from serious blunders.

The stability of both my children in the face of considerable odds, and the gaiety and happiness of my daughter Mandy throughout, were my most valuable support during the past three years.

And, above all, I thank my husband, Don Honeyman, who has contributed to and is part of every aspect of the work on this book.

The photographs of Franz Stangl in prison and talking to the author are by Don Honeyman. The photograph of Treblinka now is from the collection of Alexander Bernfes.

My dialogues with Franz Stangl, Kommandant of Sobibor and Treblinka, which were published in an abbreviated version in October 1971 in the
Daily Telegraph Magazine
in England (and subsequently in magazines throughout the world), represent the framework upon which this book is constructed: its focus. But they are finally only a small part of it.

I originally conceived the idea of talking with Stangl when, attending his trial in Germany in 1970 (as, in the course of journalistic work, I had attended other Nazi crime trials), I realized that whatever else he might have been, he was, unlike many others I had observed under similar circumstances, an individual of some intelligence.

He was the only Kommandant of an
extermination
camp who had been brought to trial. There were, extraordinarily enough, only four men who specifically filled that function: one is dead, and two have managed to disappear from sight. I had felt for many years that, despite the great number of books and films on the Nazi era, there was a whole dimension of reactions and behaviour we had never yet understood and which yet is deeply relevant to the pressures and perils which beset us now and may threaten us in the future.

I thought it essential, before it became too late, to try at least once, as far as possible unemotionally and with an open mind, to penetrate the personality of a man who had been intimately involved with the most total evil our age has produced. It was important, I thought, to assess the circumstances which led up to his involvement, for once not from our point of view, but from
his.
It was a chance, I felt, to evaluate, through examining his motivations and reactions as he described them rather than as we wished or prejudged them to be, whether evil is created by circumstances or by birth, and to what extent it is determined by the individual himself, or by his environment. Stangl was the last and ultimately the only man of that particular calibre with whom such an experiment could be attempted.

The seventy hours I talked with him – in German – provided a beginning of the answers I sought. But others were needed to complete the picture; not only because his words – those of a profoundly troubled man who frequently revealed extraordinary manifestations of a dual personality – needed to be evaluated against the historical records and the memory of others who had known him, but also because – I came to recognize – no man’s actions can be judged in isolation from the external elements that shape and influence his life.

I spent another eighteen months studying records, and seeking out men and women in several corners of the world who were involved in one way or another with the story Stangl told.

Some were intimately involved, like his family in Brazil who continue to love him; some appallingly, like the
SS
personnel who worked under him and who are now back in society after serving prison sentences, and like high Nazi officials, at one time his administrative superiors; some tragically, like the camp survivors who, after miraculously escaping, have now remade their lives in different countries; some marginally, as diplomatic observers, or as innocent witnesses to the catastrophes in German-occupied Poland. And lastly there were the priests who helped people like Stangl escape from Europe after the Third Reich ceased to exist.

My talks with such priests, and others who were bent on justifying the actions of Pope Pius
XII
and his advisors, faced me with a disconcerting moral conflict, for I am very conscious of the value to society of the continuity – the stability – which the churches provide, and of their present vulnerability. In the final analysis, however, despite my reluctance to add to the polemics about the record of the Vatican and Pope Pius
XII
during the Nazi period, the sombre facts, previously unpublished, which emerged during my research could not be ignored. It seemed essential to pinpoint responsibility, if for no other reason than to demonstrate how many men of the Church did
not
share the Vatican’s attitude.

As far as it is possible for any thinking individual who was intensely involved, like most young people in Europe at the time, in the events of World War II, I approached the research for this book with a minimum of prejudice and with determination to question but not to hurt.

The truth is however, that most of the men and women who agreed to relate and examine, with extraordinary honesty and at considerable sacrifice to their peace of mind, the most intense experiences of their lives, ended by revealing themselves deeply, not really for this book but out of their own need to explore the past. I have deleted a few things which appeared likely either to distress them, or cause damage to third persons. None the less, the journey between self-discovery at this level of intensity, and seeing one’s thoughts and anguish reproduced in print is a long one, and unfamiliar to most people. I can only hope that the book will contribute to the understanding of all those who helped it come into being, and not cause them embarrassment or pain.

It is through all of them that the theme of this book evolved and crystallized. It is not intended to be primarily an account of horror, though horror is unavoidable, nor is it only an effort to understand one man who was uniquely implicated in the greatest tragedy of our time. It is a demonstration of the fatal interdependence of all human actions, and an affirmation of man’s responsibility for his own acts and their consequences.