Read Into the Dim Online 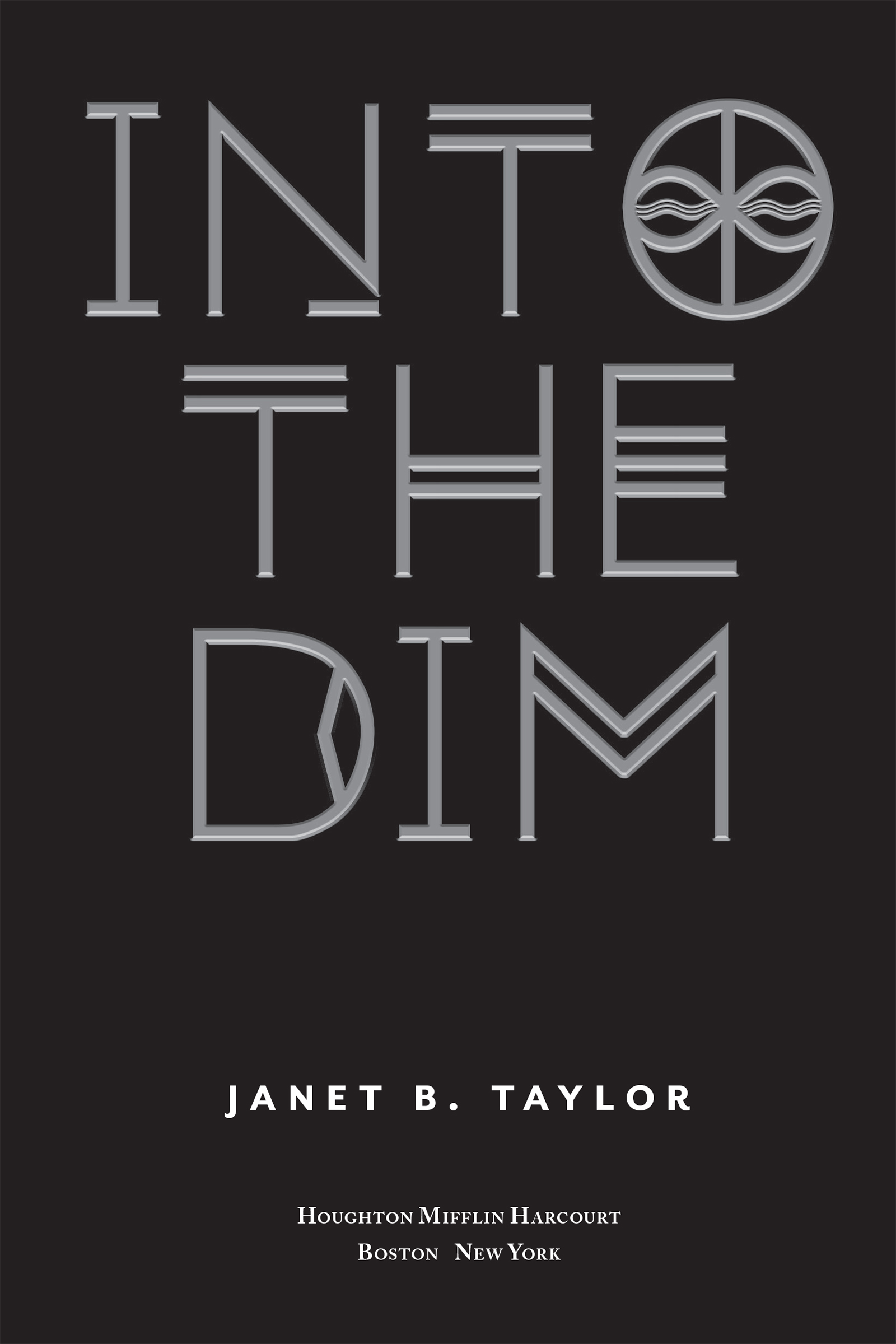 Into the Dim / Janet Taylor.

Summary: Sixteen-year-old Hope Walton travels back in time to help rescue her mother, a member of the secret society of time travelers, who is trapped in twelfth-century England in the age of Eleanor of Aquitaine.

For Phil: Who always,
always
believed I could .Â .Â .

E
VERYONE IN TOWN KNEW THE COFFIN WAS EMPTY.

I think that's what packed the pewsâthe pure curiosity of the thing. They didn't come for love or admiration. Nope. They came for the show. They came because it was big news. A juicy scandal that jolted our small southern town like spikes of summer lightning.

Hometown boy Matthew Walton was finally laying his wife to rest. By the time my mother's funeral began, it was standing-room only.

Though it was only midafternoon, I was already drained. Sweat bled through the back of my shirt, gluing me to the wooden bench. As the inept fan buzzed overhead, a quick, darting movement caught my eye. A small bird flitted among the rafters. Trapped. I knew exactly how it felt.

As the priest droned a pallid eulogy, venomous whispers began to surge from the hushed crowd behind me. The hateful words oozed up to corrode my skin, exposing muscle and tendon and jittery nerve endings.

“.Â .Â . hate to speak ill of the dead, but we're all thinking it.” “Personally, I couldn't stand the woman.” “That Sarah Walton. Always thought she was so much better than the rest of us.” “Yeah. Snooty bit .Â .Â .”

The voices trailed off as the priest wound down. But the quiet round of chuckles that followed made my teeth shriek, like biting down on tinfoil. My throat ached with the urge to scream. To tell them how they were all vapid, backward simpletons, just like my mom always claimed.

My mother was far from “snooty.” She simply couldn't tolerate these small-town divas with their sly prejudice and malicious gossip. She'd rejected them long ago, and they'd never forgiven her for it. But she was brilliant and brave and .Â .Â .

The word slammed around in my brain, keeping time with the bird's desperate circling. I could almost hear its fragile heart, beating so fast it was bound to rupture.

My hands clenched in my lap. My legs strained with the effort of staying in my seat. God, I wanted to see their shocked expressions when I shot to my feet, spun around, andâ

I flinched at a sudden thump. The bird, in a bid for freedom, had crashed into the false security of the stained-glass window. It tumbled to the floor in a heap of floating feathers. My heart stuttered, and the rage dissipated on a wave of exhaustion. My fists relaxed. The urge to scream subsided as I stared at the crumpled creature lying so still on the ground. A life snuffed out in an instant, just like that.

The eulogy ended. Jaw set, I followed my dad's stooped form to our place near the altar. As his narrow shoulders hitched, I finally let my gaze drift to my mother's beautiful, empty coffin. I sidled away, gulping. Pain pinged my temples. An iron band tightened around my scalp. Squinting against the pain, I focused on the details. Burled walnut, mahogany inlay, brass handles, and the casket's manufacturer discreetly embossed in the lower left corner:
JOHNSON & SONS
.

The words roared out of nowhere, a newspaper article I'd seen years before began to scroll through my mind in neat, orderly rows.

My hands twitched.
Not. Now.

I struggled to concentrate on something else before the words overwhelmed me. Before they became too big for my skull. I tried to look somewhere else, anywhere else, but my gaze kept drifting back to the flower-draped coffin.

Roses, lilies, and a huge spray of reeking blue carnations that Mom had always called by their Old English term, “gillyflowers.”
The Gillyflower. Queen Elizabeth Tudor's favorite blossom. She surrounded herself with them at court .Â .Â .

The information swelled, marching across my vision in glowing green columns. The genus and origin of each type of blossom, followed by dates and significant events of Elizabeth's reign. The words expanded until details of every European monarch since Charlemagne flowed before my eyes in a translucent overlay of glowing green columns.

On and on it went, until the chapel and the mournersâthe real worldâfiltered away. I felt myself swaying, listening only to the symphony of knowledge in my head. Then, cutting through the din, the sound of my mother's voice, low and incessant.

A true photographic memory is extremely rare, Hope. It is imperative that we devise a way to keep your mind organized. People with your kind of eidetic abilities must learn to contain all that information, to tamp it down, or it will overwhelm you. Concentrate. Stay firmly grounded. Focus only on what is right before you.

My training kicked in. I shoved back the mass of useless information, spooling it down into the mental image we'd come up with. A battered gray filing cabinet, like the one in Mom's office. In my head, I slammed the door for good measure and glanced over at my dad.

He hadn't noticed. That was no surprise. Pasting on a smile, Dad heaved a quiet sigh as curious mourners began to thread their way toward us for handshakes and awkward hugs.

Firmly grounded. Focus on what's right before me.

Yeah. 'Cause that's so much better.

The endless line passed, leaving behind a sickly odor. Too many flowers mixed with a crap-ton of cheap cologne. My gut began to rebel as Dad turned to me, brown eyes owlish and distracted behind thick frames. When he couldn't quite meet my eyes, a last phraseâa stragglerâloosed from the billions I'd tucked neatly away. It curled and flapped like a ribbon set loose on the wind.

A miasma arose. The decaying bouquet of a doomed queen's garden.

Who wrote that?
The answer came to hand like a well-trained dog.
Oh, right. It wasâ

“Well, thank God that's done and we can all get back to our lives,” my grandmother said as she marched toward us. “Though I still say it was a ridiculous waste of money to buy a casket, Matt. You could've had a nice little memorial service, butâ”

Beatrice “Mother Bea” Walton gave a nod to the petite, round-faced woman who had moved to stand at my father's side.

“Stella, honey,” she said, “would you be a dear and go make sure the car's ready?”

“Of course, Mother Bea. Happy to.” Stella proffered a tremulous smile before rushing off to do my grandmother's bidding.

My father's new girlfriend was a nice lady. A librarian. And one of the few people in this town my mother had genuinely liked. I didn't blame her for jumping at my grandmother's command. Everyone from the mayor to the bag boys at the grocery hopped to when Beatrice Walton issued an order. I was always mildly surprised when they didn't bow.

I didn't really blame Dad for being with Stella either, though it had only been seven months since Mom died. When he'd fallen apart, Stella had been the one to pull him back together. She'd tried to befriend me, too. But I didn't want a friend. I wanted my mom.

After Stella scurried off, my grandmother directed her words at my father, her son the scientist. Her youngest, her pride and joy until eleven years ago, when he'd gone against her wishes and married my mom, taking on five-year-old me in the process.

“I assume you'll get Hope registered at the high school come the fall,” Mother Bea said. “No more of that silly homeschooling, now that your wife's gone.”

Mother Bea never called my mom by name. Just “your wife.” I shot a look at Dad. He wouldn't look at me. But when he nodded to my grandmother, a cold dread began to spread through my veins.

When I was younger, I'd begged to go to “real” school, but Mom wouldn't hear of it.
And waste your talents on that inbred travesty they call an education system? Hardly.

Now they meant to thrust me into that world of Friday night football games, pep rallies, and “good ole boys” with decapitated Bambis in the back of their mud-spattered pickups?

The very thought filled me with horror.

Ignoring her, I turned to Dad, confused. “What letter?”

For an instant, he only glared at his mother. Finally, he forced a sickly barely-there smile and reached for my hand.

“Hope,” he said, “a few weeks ago, I received an email from your mother's sister, your Aunt Lucinda. She's invited you to spend the summer with her in Scotland. Isn't that wonderful, honey? You'll get to meet your mother's people. I've told her you would come, of course, andâ”

“What?” The word bounced against the walls of the empty chapel like the poor, doomed bird. “What are you talking about?”

“W-we”âmy dad stuttered over the wordâ“that is, Stella and I, feel that it would be good for you to get away, honey. You need to heal. We all do. And .Â .Â . well .Â .Â . we've planned a little trip ourselves. Aâa cruise. So I thought .Â .Â .”

He trailed off, helpless in his betrayal. Mother Bea gleamed with triumph as he reached into a pocket and pulled out a crumpled piece of paper. He smoothed it out, and pressed it, limp and damp, into my hand.

As I've already offered my condolences, I shall not do so here. This letter is, instead, in reference to your daughter. I wish to request that Hope come spend the summer with me, here at Christopher Manor. As you are aware, the manor is located in a lovely area of the Scottish Highlands. I feel its pastoral landscape could be soothing to Hope. As there are other young people who live at the manor, she will not lack company of her own age.

Attached you will find the pertinent information regarding the first-class ticket I have selected. I look forward to hearing from you.

Postscript: Please inform Hope that I also believe there are insights she might gain at her mother's childhood home which would not be feasible for her to discover in her current circumstances.

A Gentleman and a Cowboy by Randi Alexander
Los cuatro grandes by Agatha Christie
Collecting Cooper by Paul Cleave
Awakened: A New Twist on a Timeless Tale by Marr, Melissa
Certain People by Birmingham, Stephen;
The Rich Are Different by Susan Howatch
RESONANCE by AJAY
Beautiful Dream by Paige Laurens
Dizzy by Jolene Perry
Little Bastards in Springtime by Katja Rudolph
Our partner