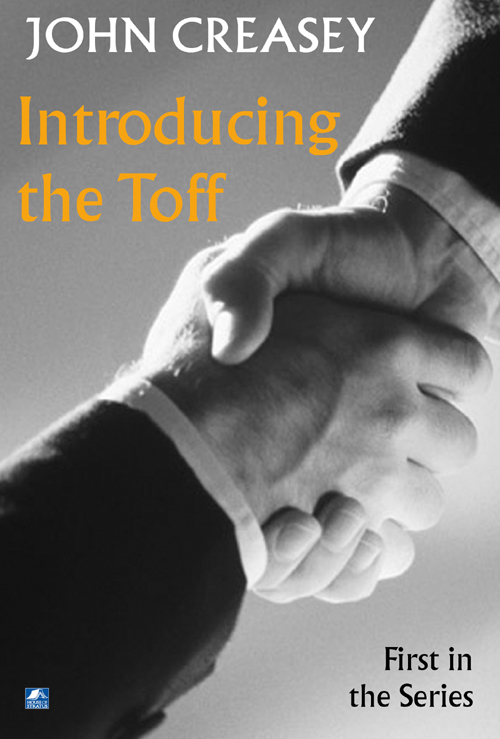 The right of John Creasey to be identified as the author of this work has been asserted.

John Creasey – Master Storyteller - was born in Surrey, England in 1908 into a poor family in which there were nine children, John Creasey grew up to be a true master story teller and international sensation. His more than 600 crime, mystery and thriller titles have now sold 80 million copies in 25 languages. These include many popular series such as
Gideon of Scotland Yard, The Toff, Dr Palfrey and The Baron
.

Creasy wrote under many pseudonyms, explaining that booksellers had complained he totally dominated the ‘C’ section in stores. They included:

Never one to sit still, Creasey had a strong social conscience, and stood for Parliament several times, along with founding the
One Party Alliance
which promoted the idea of government by a coalition of the best minds from across the political spectrum.

He also founded the
British Crime Writers’ Association
, which to this day celebrates outstanding crime writing.
The Mystery Writers of America
bestowed upon him the
Edgar Award
for best novel and then in 1969 the ultimate
Grand Master Award
. John Creasey’s stories are as compelling today as ever.

who first put the Toff into print

In the murky saloon bars of the East End of London, and the countless grimy doss-houses in the side streets and alleys branching from the Thames, where the scum of the earth got drunk and the chief topic of conversation was crime, they called the Hon, Richard Rollison the Toff. Wherein lay many stories.

At the time of the story with which we are immediately concerned, the occupants of those squalid quarters dare not speak the Toff’s name without looking furtively over their shoulders, suspicious of any unfamiliar face, fearful that he was among them. He appeared in the most unexpected places, and at the most inconvenient times, with a twisted grin at the corners of his mouth and his grey eyes glinting as though he had just communed with the Devil himself, and had the Devil’s own knowledge of the particular piece of villainy under discussion.

From Lopez the Killer, whose thin-bladed knife had been the foulest weapon in London until the Toff got him, to the lowest-browed pickpocket, they were afraid of the Toff. If he singled out any one of them for his attentions, the victim felt a clammy sensation about his neck, saw a pair of flinty grey eyes wherever he went, and was in a state of perpetual ferment, afraid that the Toff was waiting for him at the next corner, yet not sure that his lean, powerful figure wasn’t behind him, waiting for just the right moment to do his stuff.

Nine times out of ten it was easy meat when the Toff did strike. He called it psychological terrorism, and said unblushingly that he had brought the science to the positive peak of perfection.

Only a very few among that section of the community conveniently labelled the Underworld, denied it. Things came to such a pitch that when the Toff was in the offing it was difficult to hire a cosher – the lowest form of labour in Limehouse and Shadwell – and next-door to impossible to find a man prepared to handle dope or take up a safe drop for blackmail.

The police could be coped with; the ordinary private investigator was a thing of scorn; but the Toff was a thing apart. Sometimes he worked on his own, and sometimes he worked hand-in-glove with the police. Not that he had any great love for the police as such, but having one great point in common with them – being the suppression of crime, particularly crime with violence, or drug trafficking, or blackmail, and that vilest trade of all, white slavery – co-operation was sometimes necessary.

Cracksmen and worse hated it most when the Toff worked on his own. On those occasions he adopted measures to attain his ends which would certainly have not been approved by the majesty of the law, but they were undoubtedly effective. The origin of the Toff’s campaign against crime was the subject of many wild rumours, but in point of fact it was simple. He came down from Cambridge worth half a million of money and with a hatred of dullness. To escape it he travelled the world’s farthest corners; and from the dope dens of Shanghai, the dives of San Francisco, and the cesspools of Marseilles, trickled fantastic stories of his speed on the draw, his uncanny accuracy with a knife, the punch like the kick of a mule, which he carried in both hands. And always they were concentrated in the one subject – the suppression of crime.

Achmed Dragoli first heard of the Toff from Harry the Pug, a retired prize-fighter. Harry’s face was completely flattened, and his latter years had been spent in the profitable business of pub-keeping and, occasionally, the bumping off of unwanted folk.

The police rarely found the body when Harry the Pug did a job, which accounted for Harry’s prosperity and the comparative safety of his Shadwell pub, the ‘Red Lion.’ It said much for the Pug’s cunning that so far the Toff had not paid his respects to his particular den.

The two men were sitting in Harry’s private parlour, above the saloon bar. Achmed Dragoli, who had been introduced to the Pug by another gentleman in the trade, made a promising proposition, but Harry turned it down flat.

‘Not a hope,’ he said finally. ‘I wouldn’t touch it for ten thousand thick ‘uns. Before we got going we’d have the Toff on the job – and I ain’t ready for the rope yet, mister.’

Dragoli evinced no signs of disappointment. He was a big man, with a curious flowing grace of the East, but his deep-set black eyes, with their yellowish whites, full lips partly hidden by a silky brown beard, bore silent testimony to that worst of all rogues: the Eastern degenerate.

He spoke good English, with a slow, careful enunciation.

‘You are frightened of this – Toff?’

Harry the Pug had a thick skin.

‘I’ll say I am,’ he admitted candidly, ‘and there ain’t a bloke what’s come up against him once who wouldn’t live through a n’earthquake rather than run into ‘im again. I seen the Toff pick up a bigger man than you and pitch ‘im over a twelve-foot wall – and I ‘adn’t been drinkin’. And I ain’t doing no killing this time, Mr. Dragoli. That’s final, see?’

‘I was told,’ said Dragoli cunningly, ‘that you had a reputation for doing this work safely.’

‘Sure,’ he said complacently, ‘that’s right. Show me the man yer want to git rid of, and I’ll do it slicker’n any man in town – if it’s straightforward. But there’s too many loose ends, mister, and’ – the Pug’s little eyes glinted –’I ‘appen to know the Toff’s in town. That’s enough for me. He’d be on our tails in ‘arf a shake, and there wouldn’t be a sparrer’s chance of gittin’ ‘im off it.’ Harry paused, and poked his thumbs through the armholes of his gaudy waistcoat. ‘Sorry, mister. I know yer money’s good. You wouldn’t come from where you do if it wasn’t. But I ain’t takin’ no chances with a killin’ job when the Toff’s around.’

Dragoli stood up, shrugging his shoulders. Harry watched him half-way to the door before he spoke again.

‘But I don’t mind doin’ yer a good turn, mister. There’s a guy what might take yer, pokin’ round town – a Yank. I reckon he ain’t met the Toff yet. His name’s Garrotty and you’ll find him at Blind Sletter’s place – the “Steam Packet”, Lambeth. You know the “Steam Packet”, don’t you?’

‘Yes,’ he said in a curiously chanting voice, ‘and I’ve heard of Garrotty. Perhaps it would be as well to give this job to him.’

‘He won’t turn it down,’ said Harry the Pug with assurance. ‘He’s gittin’ tired of doing nothing. Good night, mister.’

As with many of the Toff’s adventures, fate had told him nothing of Achmed Dragoli before the affair near the London-Chelmsford road. But it is fairly safe to assume that he knew nothing beyond the fact that Garrotty, the latest Chicago Big Shot, had slipped past the police and was somewhere in England. The connection between Dragoli and Garrotty was as yet unknown, and the sinister influence of the Black Circle was barely suspected. Otherwise the Toff would not have been caught napping; that never happened when he was out on ‘business’.

Yet even after the first brush he felt in his bones that the murder on the Chelmsford road went deeper even than it appeared, which was deep enough. And, as often happened, he was right.

The Toff was driving across the low-lying Essex countryside, beneath a harvest moon shimmering silver from blue-grey heavens, dimmed now and again by little white puffs of cloud. There was an exhilarating nip in the air, and his body was pleasantly relaxed after a day’s country-house cricket – his favourite game – at his father’s Norfolk home. Only a little affair at the Old Bailey next morning, when he was due to give testimony anent the murderous activities of Lopez the Killer, would have made him do the journey that night instead of waiting till the following day; from such small beginnings sprang many of the Toff’s adventures.

Witch Fire by Anya Bast
Genevieve: A Witchblood Story (Witchblood Series) by Mills, Emma
Heartstrings and Diamond Rings by Jane Graves
Below Mercury by Anson, Mark
Empress of the Night by Eva Stachniak
Bad Company by PJ Adams
TORCH by Rideout, Sandy, Collins, Yvonne
A Stranger in the Garden by Trent, Tiffany
The Menagerie by Tui T. Sutherland
Keeping Holiday by Starr Meade
Our partner