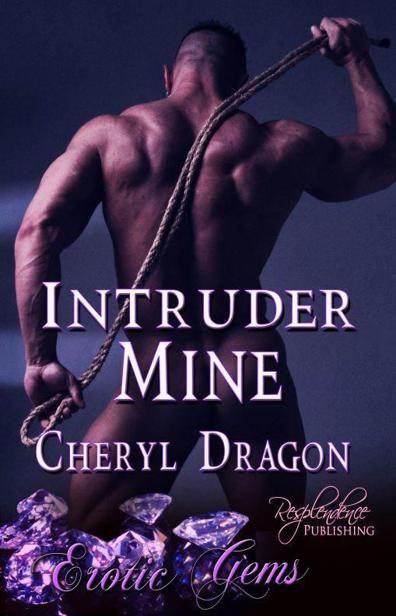 After another week of trying to get high school kids to learn French, Carolyn Baxter’s brain switched gears as soon as she parked her car in the driveway. She had an online date tonight with her Master. Stopping her giddy thoughts, Carolyn had to slow down and match his pace. In the three months they’d been playing via webcam, she’d never seen his face, but she’d fallen hard. Finally, a man who made her work for her reward. She’d revealed her deepest secrets and longed for more.

Fear gripped her. It couldn’t be real! She kept every door and window locked. Living alone not far from a big city had taught her not to be foolish and trusting. The strong man spun her, and she was faced with two more men.

No masks but they were dressed in black jeans and shirts. One was blond with blue eyes, and the other dark in both areas. Both had enough muscle to make her think twice about running. They grinned at her, and she shuddered. This wasn’t a robbery. She struggled and tried to scream, but the hand over her mouth made her feel suffocated. The hard form behind her sent confusing messages to Carolyn’s body. She was primed for sex play, but hers was all safe and online.

“Don’t fight. You wanted this.” The dark eyed man in front of her looked her up and down.

She shook her head. She didn’t know them. How could they say that?

The other man chuckled. “Sure you do. Sweetie, nothing on the internet is private. You looked hot doing that dirty stuff for your online
Master,
but we enjoyed it, too.”

Her face burned and tears welled up. Master Seth promised it was a secure line. She’d gone through a service that did background checks and gave a safe forum to match people. Did Seth let others watch? Had she been hacked?

“Don’t worry. We’re going to give you
exactly
what you wanted. We like to combine fantasies. Intruders are hot. Three guys—hey we’re happy to share, right Jones?” The blond one nodded.

“That’s right, Smith.” Jones walked up to Carolyn and unbuttoned her blouse.

She struggled, not knowing what else to do. Everything they said was true. In high school and college she’d had the intruder fantasy. It was her most embarrassing one—to be forced and taken by strangers. It was what had led her to find her submissive side. Wanting more than one man was her current fantasy.

She’d hoped Master Seth would fulfill her fantasies, not random strangers who hacked her. As Jones tugged open her blouse, Carolyn saw Smith undressing. The gorgeous muscle and growing cock made her relax for a second. It was her fantasy, and her body still craved it. So far, they hadn’t hurt her.

Jones looked her in the eye. “Very nice rack. We’ll leave the bra on for now. First you, need to get this. If we let you go, you don’t scream, you don’t run. You do exactly what we want, or we’ll tie you up, punish you and use you until we’re bored. And our boss doesn’t get bored easily. Then we’ll leave you tied up and call the cops, your neighbors and the principal of the school you teach at.”

Fear and rage gripped her tighter than the mystery man behind her. Was he the boss? His cock was hard, but he showed no fatigue at holding her. If the school and parents found out what she did on the weekends, they’d never let her teach. She’d be fired and have to move.

“Understand?” Jones asked as he pulled off his shirt.

She nodded. They were going to take what they wanted anyway. Maybe if she cooperated, they’d be less inclined to hurt her. Carolyn loved being submissive and her sexual fantasies fueled her desire to fully engage in the lifestyle, but she never wanted the extreme pain some subs did.

The hand lifted off her mouth, and she took a breath of cool air. The throbbing in her cunt embarrassed her, and when the arm around her body released, Carolyn felt off balance.

“Drop the blouse on the ground and lose the skirt.” Jones unbuckled his belt and opened his fly.

Carolyn let the blouse fall and slowly unzipped her skirt. The men were being careful. Only one undressed at a time so two were always watching her. She couldn’t out run or fight two of them—certainly not all three. Men liked her petite figure, but now, she wished she’d taken that self-defense class.

She turned and looked at him. Tall and muscled, he had on all his clothing and stared at her commandingly. That voice made her tremble. She stared into his blue eyes and felt bold. Brown curly hair and deep brown eyes gave him a boyish look, but that handsome face was no-nonsense.

Then something shiny caught her eye. His belt buckle was an exaggerated ‘S’ that could be mistaken for a snake at quick glance. That symbol was Master Seth’s profile picture. It was the only visual clue she had about him. Her pussy tightened as she inched the skirt down. It’d been a rough day with no panties, but she’d done exactly what her Master wanted.

Carolyn couldn’t stop smiling. It had to be him.

Seth Barrett caught the glint in her eye. He’d only said one word, but her eagle eyes had caught his belt buckle, as well. He loved that she was smart. A sub that didn’t turn off her brain aroused him much more. When she licked her lips, he knew his sub wasn’t afraid anymore. She’d be damn grateful by the time they left, and he’d know if she belonged with him permanently or not.

Going online for subs wasn’t something he needed to do, but he was looking for something special. As she dropped the skirt, the others moved closer to touch and tease her. Seth was pleased she’d obeyed. No underwear of any kind. Her bra was flimsy black lace that barely contained her C-cup chest.

Smith grabbed her ass first. “You must drive your students crazy.”

“They don’t know.” Carolyn bit her lip and stared at the naked forms of Smith and Jones.

The Masters-in-Training were perfect for this job. Giving a fantasy to a sub was as important as keeping them safe. Seth had to turn out good Doms and subs; it was his gift.

“Oh they know.” Jones rubbed his cock over her hip. “Teenage boys are always looking. Hot teacher like you, short skirts and those heels. They’re looking down your blouse, watching you bend over. Imagining you sucking their cocks.”

Carolyn frowned. “Stop. Those are my students. I’d
never
do that.”

Their hands came down and smacked her bare ass hard. She gasped but didn’t turn on them or run. Seth smiled approvingly. Carolyn had had Masters before who weren’t firm enough with her, and she’d taken over. Too smart for some. He’d talked with her enough and seen her in action on the webcam. The woman had a strong will and desire to please.

The conflict between the two sides of her personality was part of what got her off so much. She needed to be challenged.

Seth moved in close again. “You’d never violate your students, but they’re thinking of you that way. Maybe Smith and Jones are getting some of their high school fantasies about teachers out on you. Fair is fair, and we all win. So get on your knees, and show us you’re going to play nice. Suck them off.”

She looked at him as if to protest, but Seth gave her the cool stern stare of a Dom and felt her will ease. He could tell she wanted to suck him first, and he liked that attachment, but he’d dictate how this worked.

“You wanted three guys, right?” Jones snatched the rods from her long black hair and it fell over her shoulders.

“Nice.” Smith squeezed her breasts through the lace bra. “Yeah, you’re not going to deny your fantasy are you, teacher?”

She shook her head and leaned in.

Seth watched her suck Jones slowly, rubbing his balls with her delicate fingers. The dark hair and pale blue eyes were fodder for fantasies of men at any age. The curvy figure and pale skin were even better for a Dom to show off. She was shy to start, but Seth watched her every move. She reached over and gripped Smith’s cock as she tongued the head of Jones’. Then she switched to stroked Jones and suck Smith.

If she could manage a room full of students, three men in bed would be nothing. Seth stood behind her and supervised. When she looked up, those blue eyes begged him to join in. He patted her rear, and she inhaled against Smith’s cock.

“Get in here, boss. She’s good. Nice and slow.” Smith stepped to one side.

“No, let her finish. Our little teacher has her hands full.” Seth wanted to bait her just a little as he knelt behind her and pressed to her back.

She trembled and relaxed against him. “I’ll do whatever you want. Please don’t hurt me.”

He chuckled at the canned response from a fantasy. She didn’t like the extreme stuff, and he didn’t deal in it. “You’ll do whatever I want and enjoy a little pain, too.”

Instead of arguing, she sucked the tips of both cocks into her mouth and tried to please both. Seth looked at her posture and knew she needed to be less prim. She knelt like she was in church.

He spread her knees far apart and pressed the small of her back so her round ass stuck out. Carolyn held on to the men as she found her balance but adapted quickly. She sucked them harder when Seth slid two fingers along her slick pussy lips.

“You like strange cock?” Seth asked as he slapped her rear.

He felt her flinch, but her pussy only grew wetter as she rocked on his fingers.

She moaned and sucked Jones’ cock down her throat.

“Answer.” Seth gave her another smack on her ass. This time, she didn’t flinch at all.

“Yes! I love it.” She jerked Jones’ cock as she worked the head on Smith’s with her tongue.

Seth smiled and slid a finger into her cunt while his other hand cupped one of her full breasts and pinched her nipple under the lace. Her groans were encouragement enough, but her pussy tightened on his finger.

“Get them off. You won’t avoid being fucked or played with by sucking them all day.” Seth kissed the back of her neck and down her spine.

Carolyn sucked and stroked the guys faster, and Seth watched over her shoulder. His men came, giving her a little taste in her eager mouth then letting the rest fall on that pretty, black lace bra. Seth saw the smile on her face.

“Proud of yourself?” He smacked her rear.

“I’m glad I made them happy.” She licked her lips and turned. “Your turn.”