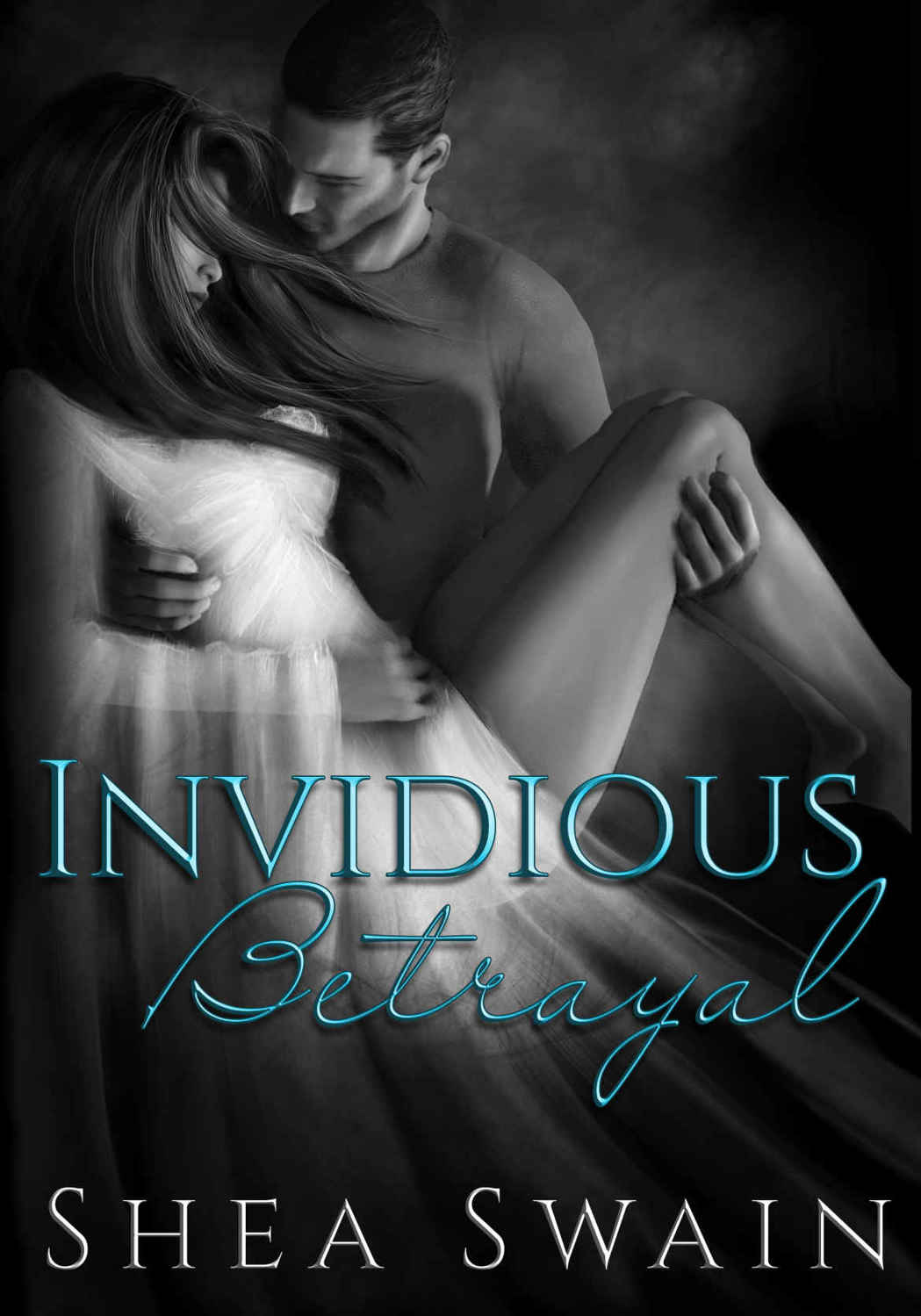 No part of this book may be copied or sold without written permission.

All of the characters and events in this book are fictitious, and in any resemblance to actual persons, living or dead, is purely coincidental.

Any product names, logos, brands and other trademarks mentioned herein are the property of their respective trademark holders. These trademark holders are not affiliated with Shea Swain or her works, media, or website. They do not sponsor or endorse any material produced by Shea Swain. Any trademarks used are specifically in a descriptive capacity.

Excerpt from Chained To Devil Son

Other Books by Shea Swain

Arnetta Howard and Geraldine Perry, you both gave me patience, understanding, and wisdom. You loved the weird little girl who would rather talk to middle-aged women than play outside with girls my own age.

I
AN HOWL CRADLED THE DELICATE
, unconscious, girl in his arms as he swiftly made his way through the maze of a mansion to get to the garage. Her head rested on his chest and his arms supported her back and legs as he held her close. The swell of her feminine curves against his body felt all too consuming; the warmth of her skin was like a sweet yet biting burn. Tamping down on his ill-placed desires, Ian forced himself to focus on the task at hand: their escape.

He ignored the hulking guard who called to him as he rushed by the security room. Turning a corner, Ian glanced over his shoulder to see if he was being followed. He hoped for a confrontation-free getaway, but he knew the odds were against them.

Gently, he lowered the arm that cradled the girl’s legs so they could slowly slide down his body until he balanced her on the balls of her feet. Holding her close to his chest, he pressed his thumb on the security scanner on the wall. He vaguely thought of her bare feet touching the cold floor, but it was something he couldn’t help right now. He needed to get her out of there and an early Spring chill was the least of his worries.

Three heartbeats later, the door leading into the massive garage swung open with a
swoosh
that gave him hope. They were almost free.

Ian looked around at the jumble of cars in the garage and noticed that his car was blocked in; but all of the car keys were on a key board mounted on the wall. So he grabbed a random set of keys and pressed the door unlock button. The headlights of a beautiful Porsche flashed, but the vehicle was in the rear of the garage and several cars surrounded it. The third set of keys he tried unlocked a luxury sedan that wasn’t blocked in and was close to the garage doors. Ian had eased the girl into the passenger seat of the sedan and was securing the seatbelt around her when he felt a heavy hand on his shoulder.

“Where do you think you’re taking that car, kid?”

Ian turned his head around and saw Brad... Or was it Brent? He didn’t remember the guard’s name, but Ian knew it was the guy’s job to protect the cars that belonged to the guests at the party. He also knew the guy was built like a defensive tackle; Ian decided to strike first to use the element of surprise. So he grabbed the hand on his shoulder and pulled the guard into his elbow, targeting his large, beefy face. The guard stumbled back in shock, holding his gushing nose. Ian spun around and threw a quick punch at the man’s bloody face causing him to stagger back again then fall to the floor. The guard didn’t get up.

Ian whipped his head around to see that she was still unconscious and strapped in the car. Rushing to the driver’s side of the commandeered vehicle, he hopped inside, started the engine and slowly backed up. The automatic doors to the parking garage opened when the car tripped the underground sensor and Ian swiftly turned the car around and barreled down the drive toward the front gates of the property. Luckily party guests were still inside because under normal circumstances a vehicle required a security plate under the hood in order to leave the property without human intervention. Many of the tight security measures had been turned off because of the party

Ian breathed a sigh of relief when the large main gates opened; he decided not to floor the gas pedal until he was a good distance away from his uncle’s property so he wouldn’t attract unnecessary attention. He wasn’t being followed, but he continued to check the rearview mirror, knowing their absence would soon be reported.

The girl’s moans pulled his attention from the road for a few seconds.

Ian slowed the vehicle then came to a stop at a red light and took a moment to look at the girl. Her long dark brown hair was matted and practically covered her delicate face; so he lightly brushed some of it away. Bruises covered her body but her dry lips, puffy red eyes, and the darkening hand prints on her throat really stood out to him. She was in bad shape and Ian feared that the thin sheet wasn’t enough to keep her naked body warm.

“I’m taking you to a hospital,” Ian told her as he fought the bile that rose from his stomach. Disgust and shame assailed him, but right now he couldn’t think about his role in what had happened to her. She needed medical attention, but he didn’t know Howard County, Maryland, all that well. The only time he even came to this part of Maryland was when he visited his uncle, and those visits were spent mostly on his uncle’s property.

Ian saw an on ramp to the highway and took it. He drove for a few miles before slowing to a few mph over the speed limit. Luckily, the weather had been relatively mild and the roads were clear and dry. When he saw a sign that indicated that a hospital was nearby, he took that exit. Stopped at a red light, Ian took a moment to glance at his passenger again. He brushed the back of his hand over her bruised cheek and was about to place it back on the steering wheel when her eyes popped open, jarring him a little. The light changed and he returned his attention to the road, but as he followed the signs to the hospital he watched her out of the corner of his eye.

She didn’t move right away. She just looked at him with a hollow gaze as if her mind had to reboot. Then those chestnut-brown orbs changed from confused to feral in a flash. Before he could react, she was screaming, “No hospital! No cops!” over and over as she pushed at the passenger door. In an attempt to calm her, Ian reached for the girl but his hand slipped and she managed to lift her foot and nailed him hard on the side of his head.

“All right, no hospitals!” Ian yelled as he slammed his foot on the brake, causing the car to skid along the nearly empty road. The force of the sudden stop propelled her forward and the side of her head collided with the dashboard. Her body went limp.

“Shit!” he yelled as he slammed his hands on the steering wheel. Ian pulled the car off to the side of the road, took his cell phone out, and dialed his father’s cell. The phone rang several times then the voicemail picked up. He listened to his father’s commanding voice, but he disconnected before the taped greeting ended.

“Damn it, Dad, this is important!”

Ian glanced up at the rearview mirror. As he peered out into the quiet darkness he lost himself to his thoughts. The weight of the cell phone he held helped him find his focus again. He turned the phone over in his hand twice before shutting off the power and removing the battery. Ian stared at the cell phone for a long moment as he unconsciously rubbed at a spot under his armpit.

“They will be looking for me, for us.”

He glanced at the girl then felt under his arm again. As long as she was with him, they would find her.

A
RIA LOOKED UP AT HER
vanity mirror to see the reflection of her father standing in her bedroom doorway. The expression he wore on his face was one she’d grown use to over the years but it never failed to make her inwardly cringe. He was obviously annoyed again.