Read [Invitation to Eden 24.0] How to Tempt a Tycoon Online

[Invitation to Eden 24.0] How to Tempt a Tycoon 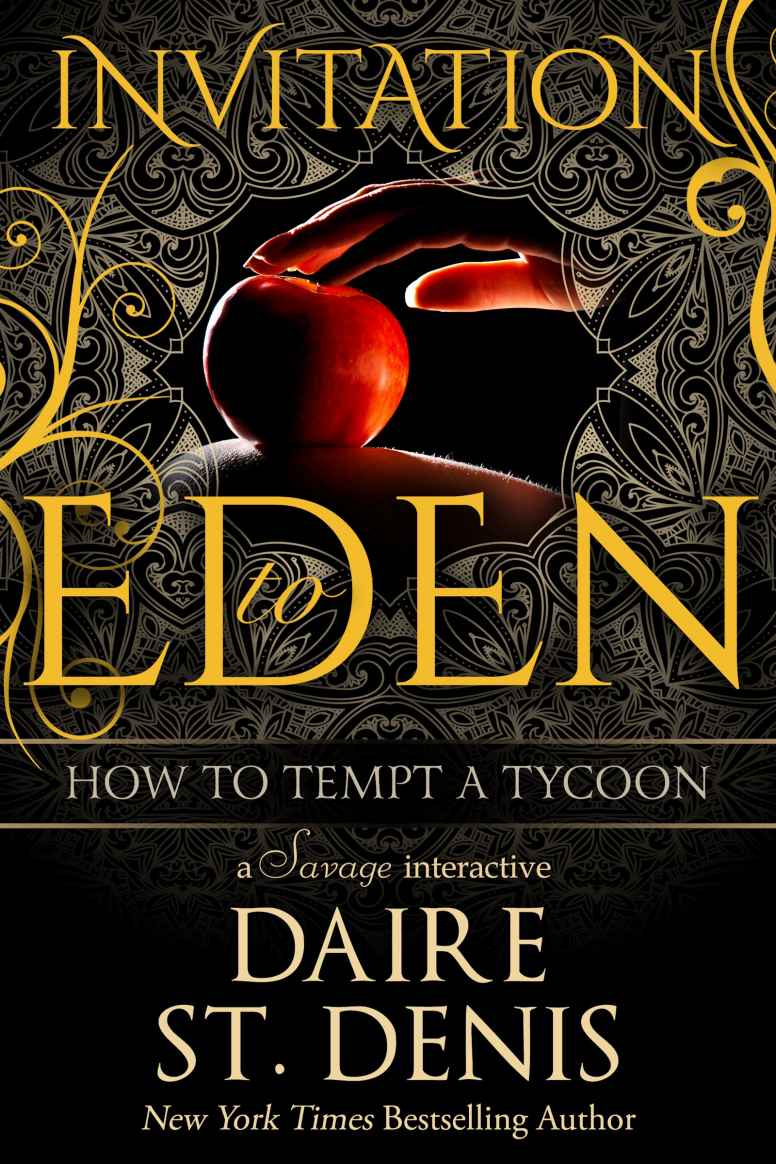 How to Tempt a Tycoon

This is a work of fiction. Names, characters, places and incidents are the product of the author’s imagination or are used fictitiously. Any resemblance to actual persons, living or dead, business establishments, events or locales is entirely coincidental.

Find out more about Daire at
www.dairestdenis.com

“SUCH a turn on! Hot! - Best ménage story I've read hands down.”

“Holy hotness! Quick, dirty, and tasty ménage. - This book is short and hot and manages to incorporate a good storyline too.”

“Holy Hell!! - I don't even know where to start other than saying this was just freaking HOT!”

We are very pleased to issue your Invitation to Eden, an exciting series coming to you in 2014 from 27 of the biggest names in romance. Join us as we take you on an exciting adventure to Eden, where anything... and everything goes!

HOW TO TEMPT A TYCOON – A Savage Interactive

Tessa Savage has traveled all over the world but she has never been to Eden. So when she receives a personalized invitation to this enigmatic island location, there’s no way she can refuse. She’s been told that Eden will fulfill her every fantasy but instead Tessa is faced with the choice of overcoming one of her two greatest fears; total vulnerability or total submission. To Tessa there is very little difference between these two things...except that the choice means she must make a decision between two very special men, one from her past...the other from her future.

Tessa doesn’t know what to do and she needs help. Your help. Help Tessa decide in this smokin’ hot, emotionally charged interactive tale!

M
y name is Tessa Savage and I believe in love...the end.

Okay, my editor says that’s not enough. She says I’m supposed to tell you a little bit about myself. Who I am and who I’m not. I guess that’s fair, seeing as you’re the one who is about to read my story.

The first thing you should know about me is that I have no fixed address; I travel the world for business and...pleasure. While I believe in happily ever after—for others—it is not what I’m about. As a self-proclaimed polyamorist, I believe in experiencing love over and over again with as many partners as possible.

This is
not
a story about one guy and one girl who, despite all odds, find a way to be together for life. If that’s what you want, you may wish to look elsewhere. No hard feelings.

If you’re looking for a story with fun sexual banter, plenty of scorching hot sex (with one or more hot dudes), told with some intense emotions, then this is the story for you!

While each story concludes with some sort of resolution it may not be the happily ever after you’re used to. But, if you’re adventurous, daring, and are looking for something a little different with an ending that might be satisfying while unexpectedly bitter-sweet, then turn the page...

PS: If this is a SAVAGE INTERACTIVE, you get to choose how the story ends and who I get to be with, which is so much fun because sometimes it means I get to have
both guys
...at once! (
How to Choose a Cowboy anyone
?)

PPS: If badass bikers are your thing, check out
How to Debauch a Biker
. If you’re interested in a story about a Greek Tycoon vs. a hot young Adonis, check out
How to Train a Lover
. So many men, so little time!

M
y name’s Tessa Savage, and although I believe in monogamy—for the grey wolf—it sure as hell doesn’t work for me. I’ve tried. Let’s just say it was a failed experiment, a story for another time.

I’ve never been happier. Particularly today. Know why? One word...

Okay, I guess that’s two words.  But it’s one place...and what a place it is. Monte Carlo is a feast for the senses, the playground of the rich and famous, a study in excess and politics.

The best thing about Monte Carlo is that no one knows me. Though I blend in with the wealthy masses because of my Vera Wang strapless gown and the borrowed jewels around my neck, I’m still a nobody. Completely insignificant.

When I say
we
shared a box, I guess I need to explain. I’m not here by myself, though it sort of feels like it. I’m here with Tal. Or rather, El Talal Bin Ahmed. He’s some sort of prince from Dubai. Or is it the United Arab Emirates? Could be Egypt. I don’t know. He’s Middle Eastern and, unfortunately for him, he’s also gay, which forces him so far into the closet he’s got mothballs in the cuffs of his Armani trousers.

“Don’t forget,” he whispers after the opera, as we make our way across the sumptuous marble lobby of the Hotel de Paris. “No flirting. You’re mine.”

He smiles and nods at a distant cousin whose family relocated to Monaco thirty years ago. “Of course not,” he says barely above a whisper. “Alejandro is mine. You need to
look
like you’re mine.”

I stop and move in front of him. He’s not the tallest man, but he is handsome and very well groomed. Though I wouldn’t be opposed to sharing him with another man, Tal is not the least bit interested in me.

I stroke his cheek and kiss him.

He practically gags into my mouth. “What are you doing?” He turns from my lips.

“Alejandro is waiting upstairs. I’m making a scene so we can skip cocktails and run up to the room as if we can’t keep our hands off each other.”

He bends his head, our foreheads touching. From a distance, it must create quite an intimate picture. At the very least, I’m hoping it looks as though we are two people very much in lust.

Which we totally are not.

“You fidgeted the whole way through
La Boheme
.”

“Sorry.” His eyes flash. “I couldn’t help it. Did you see that man’s ass last night?”

Alejandro is a member of Les Ballets de Monte Carlo. Last night Tal and I enjoyed
Carmen
, where Alejandro played Don Jose. Holy shit, is that man ripped. The little tights he wore left nothing—and I mean nothing!—to the imagination.

I’m semi-turned on just thinking about the dancer, so I can only imagine how Tal feels. I tug him in the direction of the private elevator and the attendant recognizes us. Within seconds we’re aboard and the elevator is on its way to the penthouse suite.

I sigh with great exaggeration. “That man of yours has a body to die for.”

With my arm linked through his, Tal tells me to keep my mouth shut by pinching the tender skin of my upper arm. It’s hard not to snicker. I know I’m being bad, but I can’t help it. Teasing Tal is so crazy easy.

Once we get off the elevator and the doors close behind us, Tal turns to me. “Please. Do not speak of, ‘my man’, in front of anyone. Even the help.”

Honestly. Despite how well we get along, sometimes I forget how different my life is from Tal’s. While I grew up in a series of foster homes, he grew up in a palace—an actual palace—with hordes of servants. He's got half a dozen palatial residences around the world. I have
no
residence—well, apart from a vacation home in Greece I haven't visited since I bought it.

Not that I don't have enough socked away to afford a place or three of my own. Still, Tal has
way
more money than me. He’s probably got more than the GDP of a good number of nations.

He also has an enormous family to answer to.

The only person I answer to is myself.

Not only is it hard to imagine living his life, it’s hard to relate. So, when he exhibits this sense of entitlement—as he is right now—I retaliate the only way I know how.

“I promise,” I say, drawing a cross over my heart, “If you let me have a glimpse of Alejandro, you know, up close and personal,
sans
clothing, I will be good.”

“You’re so greedy,” I complain as he opens the door to the suite.

With the door open, I can hear soft, classical music playing and a husky voice calls out, “Tala? Is that you?”

“Yes,” Tal replies. He steps in front of me, facing me while turning his back to the open doorway.

He regards me with one part snootiness and two parts lusty impatience. “Promise me you’ll behave.”

“Of course I will. I’m just teasing. You know that.”

“I know.” He smiles, but it looks tight. Then he glances quickly into the suite behind him. “This is such a...delicate matter.”

I pat his chest, trading in my mischievousness for solemnity. “I know. I’ll keep my end of the bargain, I promise.”

He takes a deep breath and his shoulders relax. This time when he smiles, it’s legit and not the practiced one he’s been using all night. Reaching into his coat pocket, he removes his billfold and from inside takes out a slip of paper. “Here, you can use this at the casino. I’ll text you when it’s safe to return.”

I glance at the slip and nearly choke on my spit. “Are you kidding me?” I wave the slip in his face. “Tal, I’m doing this as a favor. You don’t need to pay me. And even if you did?
This
is excessive.” I press the draft for fifty thousand euros back into his hand.

He takes the slip and then my clutch and deposits the draft inside. “You are my girlfriend—for all intents and purposes—so you must act like my girlfriend at all times.” With fingers beneath my chin, he tilts my face up. “That means no flirting, Miss Savage.” He tweaks my nose. “I know that will be difficult for you. But I can’t have people thinking my girlfriend is out flirting with other men while I’m up in my suite working.”

I place a hand over my heart in mock indignation. “Me? Flirt? I can’t believe you’d say such a thing.”

His response is a single arched brow.

“Okay. Okay. No flirting for a couple more days.”

“Three days, Tess. Three.” He holds up three fingers. “No drinks with men. No talking intimately with men. I don’t even want you looking at men. Do you understand?”

Tangier by William Bayer
The Greatest Traitor by Roger Hermiston
No More Running by Jayton Young
A Little Rain by Dee Winter
The Girl Who Threw Butterflies by Mick Cochrane
Is Life a Random Walk? by Harold Klemp
Payback Is a Mutha by Wahida Clark
Painless Clean Eating Diet Recipes For Lazy People: 50 Simple Clean Eating Diet Recipes Even Your Lazy Ass Can Make by Phillip Pablo
Tourmaline by Joanna Scott
Dream a Little Dream by Piers Anthony
Our partner