Read It Happened One Night Online 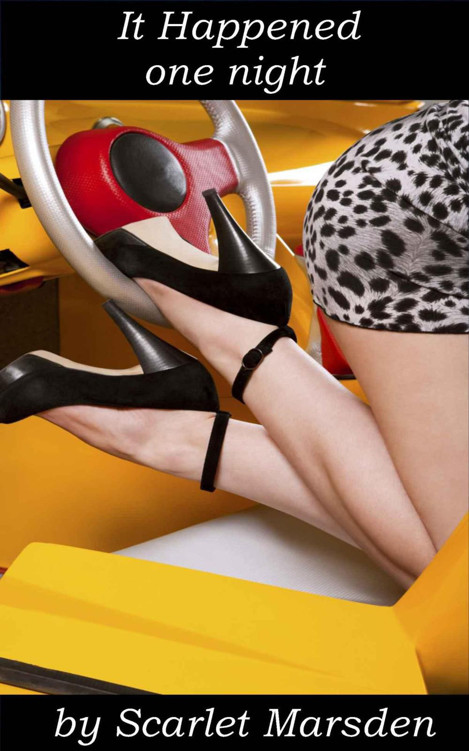 This is a work of fiction.  All characters, events, and places are of the author's imagination and not to be confused with fact.  Any resemblance to living persons or events is merely coincidence.

This ebook is licensed for your personal enjoyment only.  This ebook may not be re-sold or given away to other people. If you would like to share this book with another person, please purchase an additional copy for each recipient.  If you are reading this book and did not purchase it, or it was not purchased for your use only, then please return to Amazon.com and purchase your own copy.  Thank you for respecting the hard work of this author.

All Rights Reserved. No part of this publication may be reproduced in any form or by any means, including scanning, photocopying, or otherwise without prior written permission of the copyright holder.

Angela pulled her garter belt over her hips and watched in the mirror as she ran her hand down her smooth, flat stomach.  She admired her neatly trimmed bush and imagined how her lover would enjoy the softness of her skin and the wetness between her legs.  Noticing the clock, she knew she must hurry if she wanted to get to the nightclub in time to get a good barstool.  Still, she took her time and carefully pulled her stockings over her legs and fastened them in place with the lacy straps of her black garter belt.  She slipped on her tiny black dress and black heels.  She moved her hand over her stomach again and realized how free she felt without the confines of panties or panty hose covering her private parts.  She gave herself one last, long look in the mirror and felt she would be successful in seducing a stranger tonight while her lover watched from a distance.

She made her way to her garage and into her pretty, red convertible.  She unsnapped the hinges and pressed the button that brought the top up, then down into its hidden compartment.  She started the engine and backed out into the circular driveway and headed for the club.

Angela felt excited as she drove down the lighted streets of the downtown area.  She allowed her dress to ride up, giving those who stopped beside her at traffic lights an opportunity to check out her beautifully tanned, smooth, creamy legs.  Still, she left just enough of herself covered to spark the imaginations of those sight-seers who tried to stay even with her car.  By the time Angela pulled into the parking lot of the club, she was soaking wet with excitement.

Angela entered the club and struggled to adjust her eyes to see through the smoky, darkly-lit club. After a moment she saw David sitting at a table, alone.  She pretended not to see him, but she brushed against him as she made her way to the bar and the stool that promised to give David the best view in the house.  She ordered a drink and smoothed her dress and posed her legs in a provocative pose.  Angela knew how to get a man’s attention.

Angela’s eyes adjusted to the darkness, and through the smoke she noticed three men sitting at a table next to David’s.  One of the men was staring at Angela’s legs.  She swiveled her stool around and made eye contact with the stranger.  She uncrossed her legs slowly, then spread them just enough for the man to see her naked, wet crotch before crossing the left leg over her right.

Angela smiled at the man, and then licked her lips seductively, her tongue gliding over her top teeth and lip. She uncrossed her legs again, but this time she left them uncrossed.  She glanced toward the back of the club, toward the restrooms, giving her admirer a signal that she would meet him there.  She got off the barstool, and made her way to the ladies room.  Nobody noticed David as he left the bar.

Angela wasn’t surprised to find the stranger waiting for her outside the women’s bathroom.  She walked toward him, turned her backside to him, and pushed her ass against his crotch.

“Not here,” he said.  “I have to be careful.  That’s my brother-in-law and my boss sitting at my table.  I can’t risk getting caught.”

“Come this way,” Angela replied. She took his hand and led him out the back door, into the parking lot and over to her car.

Angela saw David standing by a tree.  She was determined to fulfill his fantasy of watching her fuck another man, and then fucking her afterward.  She took the stranger to the back of her car so that David could have the best view of the event.

“I have to hurry,” the stranger said. “I don’t need either of those guys looking for me.”

Angela hiked her skirt over her hips and bent herself over the trunk of the car.  She lifted her right leg up and placed her foot on her bumper.  She felt the excitement building within her.  She was excited to give the stranger full access to her, and she was excited to know that David was watching, and that after the stranger was finished with her, David would have his turn driving his hard cock into her cum-filled pussy.

The stranger unzipped his pants and undid his belt. He positioned himself behind Angela and rubbed his hard dick up and down her pussy, spreading her wetness onto himself and her.  He placed his dick against her honey hole and pushed himself into her hard.  He grabbed her hips and pulled her hard off and onto him.  He pulled out, and repeated the action.  He plunged deep inside her as hard as he could, and Angela almost went over the edge. He pulled out again, and then thrust hard into her pussy.  This time he didn’t pull out.  He grabbed Angela’s hips harder and forced her body to rock back and forth on his dick until both climaxed in a wicked frenzy.

“Be a good girl and lick me clean,” the stranger requested.  “But, hurry!”

Angela scrambled into position, sitting on the bumper of her convertible, and taking hold of the stranger’s cock.  She wanted to give David a really good look at her giving head to another man, but as soon as she took the stranger’s cock into her mouth, he pulled out, zipped his pants, fixed his belt and walked away.

David continued to massage Angela’s clit until she exploded in orgasm for a second time.  Again he pushed his dick deep inside her to feel her pussy muscles throbbing on him.

As Angela’s orgasm subsided, David continued to bang in and out of her with his dick.  He took his finger, the one he had used to get her off that second time, and slowly slid it into her as if it were a part of his dick.  Hot, creamy cum was dripping off his hand, so he pulled his finger out of her pussy and offered it to her so she could enjoy the taste of her juices mixed with the stranger she had fucked only minutes before.  Angela licked the goo off David’s hand, and turned to face him to give him an opened-mouth French kiss that sent her into orgasm for the third time.

Once David’s hand was again covered with cum, he placed his hand on Angela’s ass with his middle finger positioned over her crack.  He massaged her ass with that finger, getting it all nice, wet, and relaxed enough for him to easily glide one finger in.  He pumped his dick into Angela’s pussy slowly, and very deeply.  He moved his middle finger in and out of Angela’s ass a few times, and then also pressed his index finger inside her.  Angela let out a muffled moan as she climaxed for the fourth time.  This time David felt her muscles squeezing his dick and his fingers at the same time.

David was a little more forceful as he inserted a third finger into Angela’s ass.  “I wanna fuck you there,” he whispered.  David was shoving his fingers in and out in a motion that allowed him to jack his dick off while he finger-fucked her ass.  Angela exploded in her fifth orgasm with David.

When David felt Angela’s grip loosen, he pulled his prick out of her pussy and said, “Suck it!”  Angela dropped her foot from the bumper, turned to face David and sank to her knees.  She grabbed his cock in her hand and playfully licked and sucked the tip, teasing him into a frenzy with her tongue.  She pulled the head of his dick into her mouth and gave it gentle suck before backing off, and then pulling it back into her mouth.  She sucked his cock in deeper and deeper with every stroke.  Soon David’s cock was thrusting in and out of Angela’s mouth so deep that it would have made an ordinary woman choke.  But, Angela was no ordinary woman.  David shoved his meat into her mouth, and Angela managed to stick her tongue out and lick his balls.

“No, not yet,” answered David. He turned Angela to face away from him, lifted her leg back onto the bumper, pushed her body back over the trunk of her car, and drove three of his fingers into her pussy.  He pressed his cock against her ass and slowly eased it in.  For Angela, it was pleasure and pain, but soon the pleasure of David’s dick fucking her ass made Angela forget all about any pain she might have felt.  As David stroked Angela’s pussy with his fingers and fucked her ass with his dick, Angela came for the sixth time.

Little did Angela know that David had set a much higher goal for Angela’s orgasm count that night.  David wanted to see 10!

“Here’s what we’re gonna do,” David said. “We’re gonna go back into the bar and I’m gonna get cleaned up.  You can wash your hands and face if you want, but don’t wash your pussy.  I want it just as it is.”

But, Angela was getting tired of getting fucked from a standing position and kneeling on her knees while giving David head.  “I have a better idea,” she said.  “Let’s find somebody and take him home.  That way, I can have both of you at one time.”

So, David and Angela went back into the club and sat down at a table near the bar.  David excused himself to go wash up while Angela ordered drinks.

As David stood at the sink washing his dick with a soapy paper towel a tall, good-looking man came into the bathroom to pee. David had seen the guy around the club a few times, and they had even had a couple of conversations. “Hey, Buddy!” the guy exclaimed.  “Looks like you got lucky tonight!”

“Lucky ain’t the word for it,” David replied.  “She wants me to find her another guy to fuck right now.  She says she likes to fuck two guys at once. This chick is hot! How about you?  Would you like to help me make her into a pussy sandwich?”

“You’re kidding me, right?” the man responded in surprise.