Read It's a Match! Online 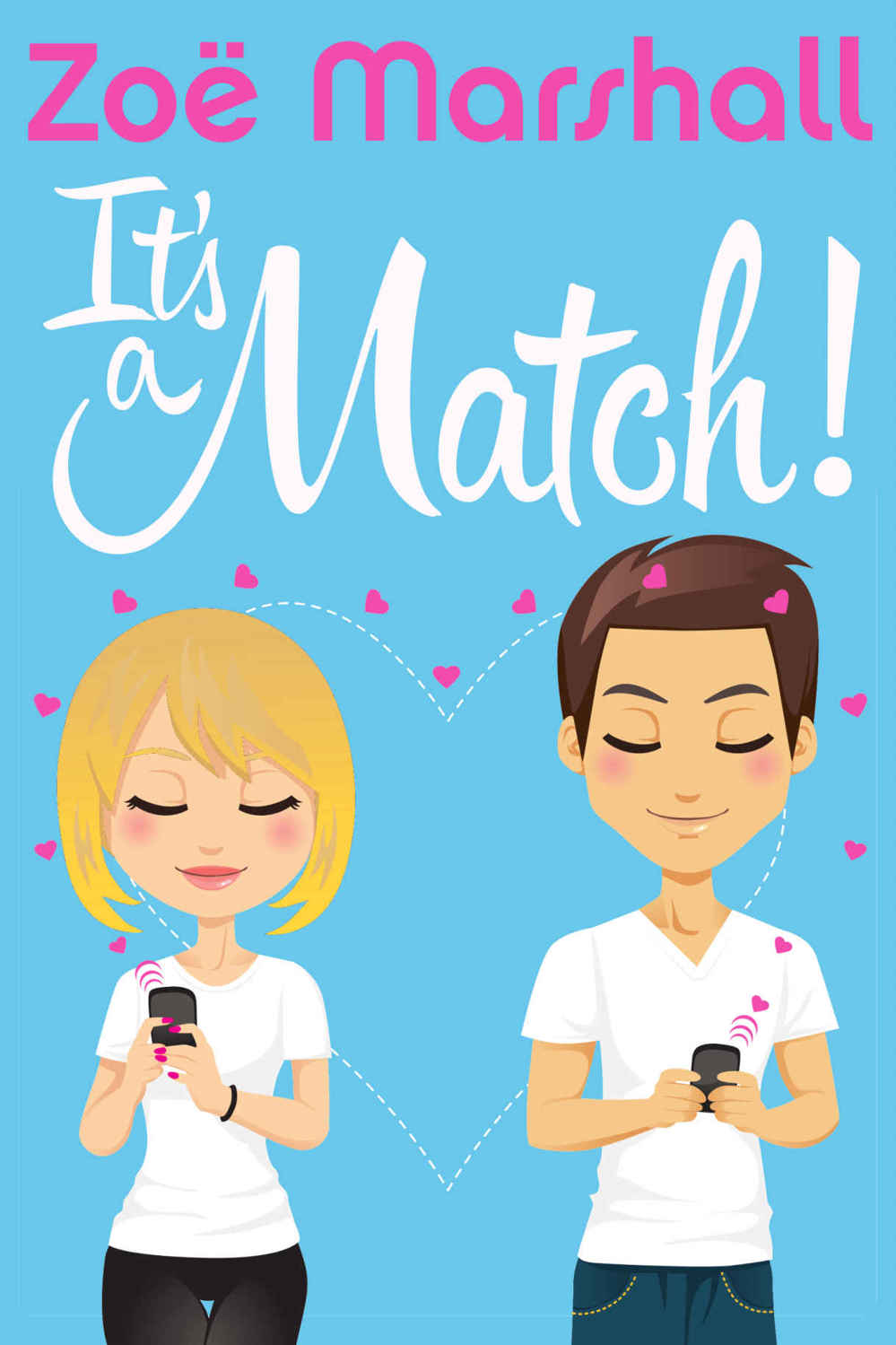 This is a work of fiction. Any resemblance to actual people or places is entirely coincidental.

All rights reserved. No part of this book may be reproduced, in any form, by any means electronic or mechanical, including but not limited to photocopying, recording, or any information storage or retrieval system currently in use or yet to be devised.

To Colin, for hanging out with me in the movie theater while I fooled around on my newest dating app (when this idea was first born).

To my very dearest friends, Molly, Ross, Joel, Shannon, Logan, and Brandon for supporting me and my many mini meltdowns throughout this process.

To Tammi Labrecque, an inspiration and a friend, without whom my brain would explode multiple times daily.

To my forever soulmate Alicia, for being the only person on this planet who has seen me at my best and very worst, yet seems to love me anyway.

And, as always, to my family (Claire and Terry included, of course), who I would be lost without.

Lastly, because of you (who shall remain nameless), I will always remember … there is no sadness, only flip flops.

SUTTON MEYERS COULDN’T
help thinking that if Aiden were there, he would have blown the evil eight-legged creature to smithereens. But, of course, she couldn’t call Aiden anymore. There had been a time when Sutton could have told him about this heinous monstrosity and he would have been over there in minutes to protect her from the demonic creature, but that time was gone.

Sutton’s attempts at intimidating the spider were apparently futile. She knew if she attempted to kill it while it was on the ceiling, it would most likely fall on her, then her heart would stop beating completely. She waved a towel in its general direction several times, in an attempt to get it onto the wall where it would be easier to extinguish. And the damn thing inched closer to her every time. Now it was directly over her bed and she wouldn’t take her eyes off it for a second.
What kind of monster needs EIGHT eyes?
she thought.
Loathsome creatures.

Sutton had only dated her ex-boyfriend, Aiden Jennings, for three months, but he’d left a mark on her in a way that no one else ever had. Now he was a distant memory, though not as distant as she would like. He appeared to be completely over it, almost instantly. Had he ever really cared about her at all, or was it all a lie…? The beginning was intoxicating. It was perhaps the happiest time of her life…

Sutton watched Aiden get into his car and blow her a kiss. They were one week into their whirlwind relationship and things were as close to perfect as it got. A few moments after Aiden pulled away, Sutton received a text:

I miss you already.

Sutton smiled ear-to-ear as she responded:

I miss you too. This is crazy.

It’s going to be a rough few hours!

Sutton’s smile widened as she walked into her house. This was unlike anything she had ever felt. It was an all-encompassing happiness. She wanted to spend every waking moment with him, but knew she needed to try to suppress letting that urge control her. She felt safe with Aiden. If anything, he seemed more into it than her, and that was saying a lot. She felt it in every look, every word, every touch, every kiss. She knew he felt as strongly as her and she couldn’t believe how lucky she was.

Sutton remained firmly planted in her desk chair, glaring at the spider, which was lounging around all smug, like it owned the damn place. She couldn’t divert her gaze for even a moment, because if it disappeared, she knew would never step foot in her room again.

She needed to get out.

She needed to eliminate the threat.

Sutton kept her eyes on the spider as she tiptoed over to her closet.
Must not make any sudden movements….
She grabbed the first shoe she could find, a sandal her cold and not-so-distant ex gave her. Fitting. Her heart began racing as she approached the bed, the sandal shaking in her trembling hand. The spider began to move again and she held back an intense urge to vomit.
Come on, Sutton,
she thought.
This is pathetic. If Aiden were here, you’d never hear the end of it. But he’s not. He’s not here. Damn him.

Sutton felt an ache in her stomach as she realized Aiden would never be there again. What once was her entire world had burnt to ash. And it had all begun the second she’d received that text….

It had been a month and things were still going strong between Sutton and Aiden. Though not as ooey-gooey as it was in the beginning, it was still exciting. And she still loved nothing more than having him by her side.

Sutton poured some Corn Flakes into a bowl as she checked an incoming text. She smiled when she saw Aiden’s name pop up.

We need to talk.

This is going a little fast.

Sutton’s heart sank and she felt sick, her head suddenly spinning. She didn’t respond. She had no idea what to say. A minute later, she received another text:

I still want to be with you. I just … need us to take a few steps back.

Sutton was searching for the words to say, then she realized what she really needed to ask. Her hands were trembling as she typed.

Is there someone else?

Of course not. I just don’t want to rush this. And it’s getting really intense.

But Sutton didn’t understand. This was coming out of nowhere. What had she done wrong? There had to be something….

Sutton slowly got up on the bed and approached the demon. She stood frozen for something similar to eternity as she contemplated the best angle to approach it from. Then she quickly got down from the bed, tossed the sandal and grabbed the first shirt she found on the floor, her old Best Buy Mobile shirt, from her first job two years ago. Before she had time to talk herself out of it, she was back on the bed and smooshing the creature with the shirt. She did that for a good minute, to ensure its complete demise. Then she rolled the shirt into a ball and stuffed it in the trashcan by her desk, as it had become a spider graveyard and she refused to ever wear it again. It wasn’t like she could put it in the washing machine—then there would be spider guts on everything she washed from that point on. There wasn’t a washing machine strong enough to wipe away the terror. And it wasn’t like she really planned to wear it again anyway.

But Sutton could at least breathe again, though her heart was still pounding rapidly. If she was strong enough to kill a spider, surely she’d be strong enough to get over Aiden … right? The day he’d ended things was the most painful day of her life….

Two more months had passed and, though Sutton wanted nothing more than to grow closer to Aiden, they only grew further apart with every passing day. They didn’t laugh together like they used to. They didn’t even hold hands anymore. A part of her knew they were over, but she was far too afraid to admit it.

Sutton was at the coffee shop near her house grabbing a latte. The nannies had gone to Starbucks that morning and tried to bring Sutton her normal coffee order, but she wanted to get out of the house. And for once she wanted to support a local coffee shop.

Sutton tapped her fingers nervously on the counter by the barista station. She was mesmerized watching them work. They didn’t use buttons for everything like they did at big coffee shops. They even hand packed the portafilter. They put so much care into it all. She felt a pain in her stomach, as she inevitably followed that thought with,
The way Aiden used to put so much care into me….

“I have a medium Graham Cracker Latte with an add shot for Sutton,” the young, heavily pierced and tattooed barista announced.

Sutton smiled as she picked up the coffee and said, “Thank you.”

“You’re welcome. Enjoy the rest of your day.”

Sutton observed the barista once more as he began to work on the next order. He was beaming, taking so much pride in his craft. He wore a black beanie with shoulder-length hair pulled into a low ponytail and, though he was smiling widely and whistling happily, she could see a hint of sadness in his tired-looking eyes. Sutton was more observant than most. It was the writer in her. She was always trying to gather ideas. And she prided herself in being able to read people.

Sutton finally turned away and took a seat at an empty table by the window. She pulled out her phone as she blew on her coffee through the small hole in the lid. She had received a text from Aiden: