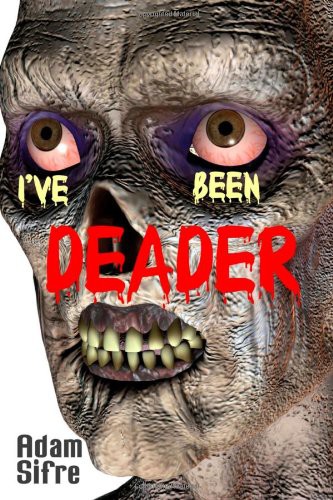 Teaser from "Here's What Happened"

Teaser from "'Take A Breather"

'I've Been Deader' is published by Taylor Street Publishing LLC, who can be contacted at:

All characters are fictional, and any resemblance to anyone living or dead is accidental.

Fred's ruined face stared back at him from a fractured, mold-spotted mirror. The remains of breakfast pooled around his feet and a pair of lace panties clung to his shoe, glued there by God knew what. Bits of flesh were stuck between his yellow teeth, along with the sodden remains of a hand-wash-only label. There was no denying that he'd seen better days.

Being a zombie is no picnic.

Compelled to pause and take stock of himself, he wiped his gore-stained hands on a filthy shirt, unsure if he was cleaning the hands or the shirt. His right eye looked like a crushed egg yolk and his left leg was broken in two places. A large splinter of bone poked through the skin above his thigh, fine dark lines etched across the surface like a bad piece of scrimshaw. The open wound on his neck had started leaking again, but at least the fluid was mostly clear now.

No use dwelling on negatives. Time to get to work
. He turned away from his reflection, and limped out of the men's room of the Vince Lombardi rest area.

An overly bright morning sun assaulted him as he stepped outside. Fred gave a mental wince, wishing yet again that he could blink. Sunlight had no adverse effect on the undead, but he had never been a morning person. Rain or shine, today he had to shamble over to Terminal C of Newark Airport, where eight breathers were making their last stand. Zombies were lone hunters and rarely worked together. Every so often, however, a kind of collective broadcast signal went out over the undead grapevine, announcing the newest brain buffet - in a shopping mall, a church, or an airport - with predictable and satisfying results.

Dozens were already making their way down the New Jersey turnpike. By their mindless, movie-slow pace, he knew they hadn't fed. Zombies weren't Jesse Owens on the best of days, but they tended to move a lot faster with a little brain in the old furnace.

If Fred could breathe, he would have sighed. There'd be hundreds of zombies, all ready to fight over eight brains and assorted bits. The breathers would probably take out ten to twenty percent of the attacking hoard before being overwhelmed. That left about ten zombies per breather. With luck, by the time he got there he would still be the brainiac of the pack.

Having his wits about him gave a zombie an edge in the hunt. The effects of the virus or whatever it was that put the mojo in their mortified flesh varied from corpse to corpse. Most became textbook droolie ghoulies, but some could reason and even remember who they were as breathers. So far Fred hadn't come across any other
thinkers
, but he doubted he was the only one.

By mid-afternoon he found himself enjoying his walk down the turnpike. Most of the fires had burned themselves out and although the air still reeked of burning gasoline, the skies were more or less smoke-free. He might be a walking corpse, but he appreciated a warm spring day like this one. He pulled his lips up in what should have been a grin.

Not that there wasn't a black lining to be found around Fred's own little rainbow of a life. Most of the zombies were a few hundred yards down the road, but two lesser undead doggedly tagged alongside of him, putting a bit of a damper on things. The virus left them as nothing more than … well, nothing more than zombies. They were about as interesting as slugs and moaned so much that, were Fred alive, he'd be sporting a hell of a migraine.

All in all, however, the day was turning out quite well. He almost convinced himself being undead wasn't so bad. Sure, it was bad luck that he was forty-five years old with a rather large potbelly when he had been bitten by that damned clerk. Being cursed to wander the earth in search of brains was bad enough, but why couldn't it have happened when he was twenty years younger and thirty pounds lighter?

He was imagining wandering the earth in search of fresh brains as a slimmer, sleeker and younger Fred, when the head of the zombie on his left exploded.

He limped over to an abandoned Ford Explorer and crouched down, scanning the area for the source of the ambush. The other walking corpse stopped and stared at the ground, a low "Braaaaiiiinnnnsss?" emitting from its drooling mouth. Fred felt a sense of relief when a bullet took the second one through its right eye. Those two had just about gotten on his last dead nerve.

A glint of light in the tall grass by a pond off the side of the road revealed the breather's position. It looked like he was alone.

The lone gunman on the grassy shoal
, Fred thought with a mental smile.

He stood up from behind the Explorer, pointed at the area where the gunman was hidden, made the undead scream of discovery then ducked back down behind the SUV and waited. Several zombies with lesser survival instincts turned off the road and converged on the field. A bullet dropped another one and Fred saw a figure pop up from the tall grass and start running. A collective moan escaped from the zombies and they began to shuffle a little faster. But unless the breather tripped, broke both legs and fell asleep, he'd be fine - for now.

Fred got up and started limping toward Exit 14. It would be another hour or so before he reached the airport. Most of the zombies were still on the road. After taking into account the ones that had left to chase the gunman and Fred's two undead groupies - now just dead - he figured there would be plenty of brains for everyone when they got there.

Fred was ... well, he was -
I'm happy.
As he shambled down the turnpike he began humming a song that was popular before he turned. In his mind it was a happy, catchy tune. But when he hummed it, it sounded a lot like "Braaiinnss ..."

Fred ignored the abandoned cars, corpses and piles of trash littering the tarmac in front of Terminal C. The carcass of a burned out passenger jet smoldered on the closest runway, black smoke coloring everything, turning a beautiful summer morning into a bruise. Several gypsy cabs were parked in front of the loading zone, their owners gone.

Not interested in negotiating fares with Newark's newest class of immigrants
.

His earlier good mood had evaporated. Something wasn't right. He couldn't put his finger on it, but the place felt ... creepy. For starters, his chances of getting an easy meal were slim. A baker's dozen of undead gathered a few hundred yards away, before the terminal's nearest entrance. They flung themselves against the glass doors, ignoring the other two entrances a few yards away. Another dozen or so wandered aimlessly in the parking lot. He'd kept back from the shambling crowd, in case the breathers inside had prepared any nasty surprises.

Zombies were strong, terrifying and relentless, but unlike rent controlled tenants, they didn't live forever. On the trek down the turnpike he'd seen one stop and fall to the ground. One moment happily moaning with the rest of them and the next - kaput. Fred's first thought had been 'sniper', but there weren't any bullet wounds. Of course, looking for fresh wounds on a walking corpse was harder than finding Waldo in a candy-cane hat factory. Still, what sniper would kill just one zombie? Like eating a single potato chip ...

No, death was too short to take unnecessary chances. He'd play it safe and leave the storming of Castle Newark to braver zombies, even if that meant giving up the choicest cuts.

No gunfire so far, always a good sign
. In the movies his son Timmy watched, the breathers were armed to the teeth and dead shots. Apparently the Apocalypse always fell on NRA double coupon day, because machine guns, assault rifles and rocket launchers seemed to fall from the sky like manna from heaven. But the reality was different. Most people who didn't have guns before, didn't have them now. Not surprising when you thought about it. When facing a plague of flesh-eating zombies, your chances of survival significantly increase if they don't see you. So staying home with the blinds down instead of heading to Wal-Mart for iPods and ammo meant you stayed hidden and kept livin'. The shooter at the rest stop had been a bit of a surprise for just that reason. Why take pot shots at a bunch of zombies who didn't know you were there?

Still, better safe than sorry. There didn't appear to be any gunmen on the roof. All was quiet, apart from the repeated thudding of undead throwing themselves against the glass doors. More zombies joined the throng. Fred started shambling forward for a better look when two zombies slammed into each other and fell to the ground, giving him a clear view of the door.

A baby
. Well, a toddler, sitting a few feet behind the door. He looked to be about two years old, and tasty. Plenty of baby fat and a nice big head, covered with light blond hair. The kid sat, legs splayed, pushing down on a bright orange and green cloth ball. No wonder the zombies were whipping themselves into a frenzy.

An unprotected child - no parents, no guns. Like winning the undead lottery
. It made him uneasy. It shouldn't make any difference to a zombie, but the thought of eating a child didn't sit well with him.
What kind of breather leaves a baby all alone in Newark Airport?
Again, he couldn't help but think of Timmy. He'd be eleven now. Ten? Well, older than a toddler, that's for sure.
If he's still breathing
.

Fred's glassy eye caught movement on the roof and he looked up in time to see two breathers, a man and a woman, manhandling one of those fifty-gallon drums. They tipped it over and light amber liquid rained down on the crowd of zombies.

A few paused in their mindless attack, but most paid it no mind. Fred, however, was very attentive. A collective moan from the undead drew his attention back to the door. The toddler was gone.

On the roof, the woman was on her stomach, leaning over the ledge, her legs wrapped around the man's waist. He sat a few feet back, his hands gripping her thighs. Her hair was tied back in a small pony tail. She wore a dirty white T-shirt and gray shorts. Without thinking Fred took a few more steps toward the building for a better look.

Then he saw the Molotov cocktail in her hand. With the skill of a Korean masseuse, she lit the cocktail while hanging upside down. One zombie took notice of her. It pointed up at the sky, moaning in agitation. Its fellow corpses did what corpses do best, and ignored it. Fred saw the woman smile as she dropped the bottle.