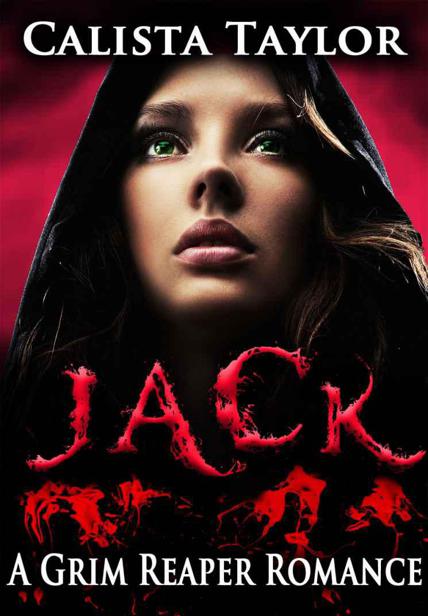 All rights reserved. This book or any portion thereof
may not be reproduced or used in any manner whatsoever
without the express written permission of the publisher
except for the use of brief quotations in a book review.

This book is dedicated to Joe, for making me laugh and for putting up with my writing craziness, to my sweet girls, for letting me write with few interruptions, and to my amazing critique partners, for their endless support, enthusiasm and insight.

Other books by Calista Taylor

Devil on a Sparrow’s Wing

It was a pity to ruin such perfection with death, but death waited for no one and made few distinctions. Lilly strolled through the park that beautiful sunny morning, looking for the reason she’d been drawn to the area. It didn’t take long for her to find him, the telltale sign of golden light surrounding the handsome young man. A perfect day and a perfect life would both soon come to an end.

She walked in his direction, the cobbles splattered with the shifting light and shadows that played through the tree branches. Then, just within reach, she pretended to stumble. The young gentleman, acting on reflex and instinct, caught her just as she’d anticipated.

“Pardon me, sir.” Still in his arms, Lilly gave him a shy smile. A tingling warmth radiated from her hand as she marked the poor man, the golden light around him now fading to grey.

She thanked him for his assistance and then continued down the road with a pang of regret. With her job now complete, he would not live longer than a week. It was always more difficult when they were young and healthy, but she did not choose who lived or died. She only carried out Fate’s decisions.

With her reaps complete, and no longer in the mood to be out in the city, she took her carriage home with nothing but her thoughts as company for the ride. She had not chosen this life, but it was better than the alternative of a cold dark grave—though not by much. Even after ten years of bringing death to unsuspecting souls, she had yet to do more than ignore the guilt that tore her up inside, and mourn all she’d left behind, her life taken away before she’d had the chance to fully live it.

Daniel, her footman, let her in and informed her that she had company. “He insisted on waiting for you, m’ lady.” He handed her the man’s calling card. “I dared not turn him away. He’s in the sitting room.”

She needed no more than a quick glance at the card to see why. “Some tea, if you would be so kind.”

She steeled herself with a deep breath, managed a smile, and entered the sitting room. “Lord Archer. What a pleasant surprise. It’s been too long.” She couldn’t quite keep the sarcasm from her voice or her heart from racing at the sight of him. It nearly escaped her memory how tall and handsome the bastard was. Not that he’d forgotten.

“Lilly, love, certainly we know each other well enough that you can call me by my given name.” The corners of Mason’s full and pouty mouth turned up in a hint of a smile, as a dark lock fell casually past hazel eyes. “I had not thought it possible for you to look even more beautiful than the last time we met, and yet I am mistaken.”

Lilly was not wont to believe a single word, given that she no longer aged. She looked no older than twenty three—the age at which she died—though her facial features had been altered just enough to give her a new identity. It was a small protection lest she run into someone she knew from her life amongst the living.

When Mason closed the distance between them, she crossed her arms in front of her, hoping it would offer some protection from his charms. It seemed Mason was the one man she could seldom resist for long. No matter how hard she fought it, there was something about him that weakened her defenses.

“What do you want, Mason? I have no patience for your games.”

“That’s a pity, my dear, for you know how fun they can be.” He ran a gentle finger down the line of her cheek.

She managed a glare while cursing her body’s reaction to his touch, a tingling heat that refused to be ignored. “I’m in no mood, and quite frankly, I’d rather be alone.”

“Did you have a difficult day?” His eyes softened while he took her in, his touch warm as he gently cupped her cheek.

“Damn it, Mason.” She swatted his hand away, frustration getting the better of her. “I hate it when they’re young. They think they have their whole life ahead of them, and then I come along and cut that life short.”

“You have too kind a heart, my dear. We do not make the decisions, even if it’s our duty to carry them out.”

He leaned in and stole a lingering kiss—and she let him, needing to feel a part of her fleeting humanity.

His mood then turned towards the serious. “Unfortunately, I’m here on a difficult matter, though I’d like nothing more than for us to pick up where we left off.”

Lilly rubbed her arms to ward off a sudden chill, despite the warm summer air. Mason was not one of the Elders, but had been around long enough to hold a position of power. She could not imagine any of his business as chancellor would concern her, even if she was one of his reapers. “What is it?”

“It’s Torrington.” He searched her face as he spoke and it made her wonder why. “Seems like he’s gotten himself in a bit of trouble and has gone missing. I’m afraid the Elders aren’t happy in the least, and need him found.”

Dark, brooding, Jack Torrington. Her heart skipped a beat to hear his name. She had hoped to find a bit of normalcy with him, yet in the end, both her past and his had been too much to overcome.

“Well, I’ve not seen him in months, and you know well enough that anything I had with Jack ended years ago.” She held Mason’s gaze so he’d know she spoke the truth. The last time she’d drawn the attention of the Elders, she’d barely survived it.

He stepped to her side and wrapped an arm around her waist, bending his head towards hers. “It may have ended, but no one’s ever been closer to him, and you were also the only one he had…
relations
with on this side of the veil. I need your help, and you know him better than any of us, love.”

What did her relations with Jack have to do with the matter? Feeling uneasy, she stepped out of Mason’s arms and put some distance between them. “Why are you looking for him? What sort of trouble has he gotten into?”

“I’ll explain while we take my carriage. I’d not ask if it weren’t necessary, but there’s no way around it, I’m afraid.”

“You want to go now?” Her mind raced through the possibilities and came up empty. Though Jack’s dislike for being a reaper was no secret, he was not one to get himself into any sort of trouble. Indeed the only time Jack had ever strayed from the rules the Elders set forth was in order to help her. “Tell me what’s happened, Mason.”

Lilly knew the area well enough, for death was inevitable in places like this—places where each breath of life seemed to be a struggle. Whitechapel was one of the poorest neighborhoods in London, the roads lined with squalid tenements, often seven and eight people crammed into a room. Even the sun seemed loathe to shine on such a dim and fetid place.

Though Lilly dealt with death daily, she seldom confronted it face to face, and found it unbearable. The woman lay in a landing above the first flight of stairs, resting in a pool of blood, naked and exposed from the waist down. Countless stab wounds riddled the body, her stomach and chest slashed. The acrid smell of blood mixed with that of the refuse, making Lilly gag down the bile that burned the back of her throat.

Mason held her hand, and though it would be impossible to find anything comforting in the face of such brutality, she was happy to have that small connection. They remained unseen and unheard, hidden in a space between the veils—not quite the land of the living or that belonging to the dead. It was a skill every reaper learned before long, for too often they needed to walk amongst the living undetected.

She squeezed her eyes shut, but thought she’d never be able to erase the bloody image of the woman’s mutilated body from her mind. The violent energy left behind from the crime filled her head and heart, piercing it like a knife, no different than if it had pierced flesh.

The police milled about the stairwell and filthy alley as they finished gathering evidence and prepared to take the body away. A chill crept over her skin, the warmth of the sun nowhere to be found.

Mason knelt before the woman and gently touched her. Still holding onto his hand, she felt a tingling energy pass through Mason’s body, but did not understand what he’d just done.

Mason led her down the stairs and away from the commotion as the police got ready to remove the body. “Her name was Martha Tabram; a local prostitute.”

“Why are you showing me this?” She shook her head, annoyed with Mason. “This life is hard enough without having to witness such violence.”

“Was it Jack?” Mason’s words hit her like a fist in the gut.

“You think
Jack
did this? I cannot believe you think him capable of such a thing.” Furious, she tried to pull away from the scene, but he refused to budge or let go of her hand.

“I’m telling you he was here, Lilly. He’s left his energy, his essence.”

All reapers left behind a trace of themselves, like trails of sand after walking on the beach. All reapers but a select few—like Mason. As chancellor, he’d been granted the ability to leave no trace, allowing him to perform his investigations with no one the wiser.

Lilly sifted through the energies present, and knew Mason was right.

“Jack may have been here, but he’s not capable of
this
.” Lilly waved her free hand around. “I’m sure it’s no more than him coming here to reap her. It’s what we do, is it not?”

“It was not her time, Lilly, and yet she lies here dead. The Fates did not send anyone to reap her because she should still be alive.” He shook his head with a sigh, and tried once more to get her to understand. “If a mortal had killed her, she would have been marked by a reaper days ago. Yet she was not marked. And if she was killed without a reaper being sent, then that means a reaper committed the murder. Just before we left—I checked to see if her soul had been released, and it had. A reaper was here to release her soul, yet it was not someone the Fates sent, and it was not her time to die.”