Read Jack Kane and the Statue of Liberty Online

Jack Kane and the Statue of Liberty 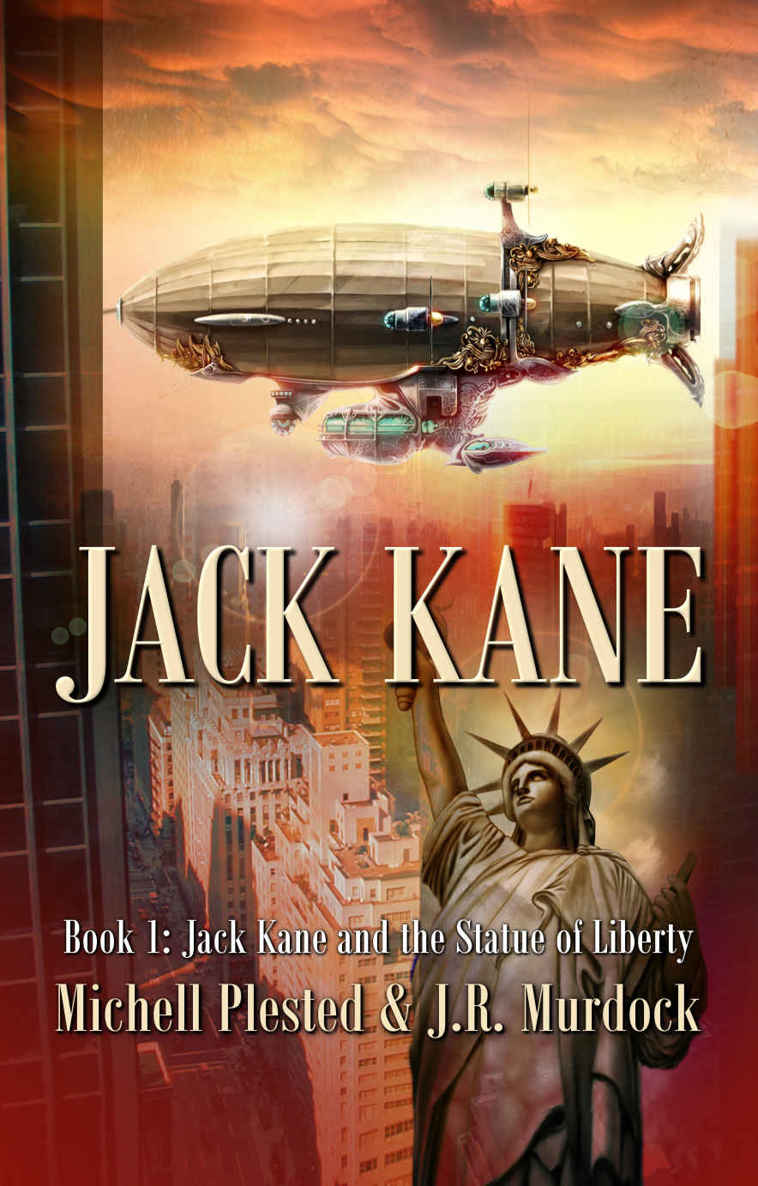 Jack Kane And The Statue Of Liberty

This is a work of fiction. The characters, incidents and dialogues in this book are of the authors’ imagination and are not to be construed as real. Any resemblance to actual events or persons, living or dead, is completely coincidental.

A Division of Champagne Books

This ebook is licensed for your personal enjoyment only. This ebook may not be re-sold or given away to other people. If you would like to share this book with another person, please purchase an additional copy for each recipient. If you’re reading this book and did not purchase it, or it was not purchased for your use only, then please return to Champagnebooks.com (or a retailer of your choice) and purchase your own copy. Thank you for respecting the hard work of this author.

Felonious Fenduke Filcher the Fourth stood on the upper patio with a brass spyglass held up to his right eye. The object of his attention was a heavily laden cargo ship entering New York Harbor a good half-mile away.

A warm breeze blew across the house, ruffling his hair.

Some might have once called Felonious handsome if it weren’t for the maniacal look in his eyes. His thirty short years of driven, single-minded existence had changed that. He now had a gaunt, haunted expression the fairer sex described as cadaverous.

It didn’t matter to him. He had more important things to do than woo love.

“Excuse me, sir,” his butler said with a subtle clearing of throat.

“What is it? I said I was not to be disturbed!” Felonious allowed a hint of anger to seep into his voice. “I told you to call me ‘my lord’ not ‘sir’!”

“I know, my lord. But you have a call on the wireless.” The man shuffled his feet on the worn stone of the veranda taking the admonishment in stride. “It’s the baron, my lord.”

The baron. What was that windbag doing calling, especially now? “Bring the wireless out here to me. At once,” Felonious said.

“Yes, my lord.” The man snapped his fingers, and two hulking brutes wrestled the wireless into place. It was a massive thing, all brass and wood. An ornate microphone decorated a wooden top and a huge speaker faced out behind it.

Felonious tugged on a lever. “Baron? How nice of you to call.”

“No time for idle chit-chat, Felonious,” a voice with a distinct British accent crackled through the speaker. “Has the item arrived?”

“I was watching the vessel sail into the harbor, my lord,” Felonious said. “It shouldn’t be long now.”

As if on cue, the night sky was lit with bright light. Moments later the concussive boom of an explosion echoed across the water.

Felonious pulled out his pocket watch. “Ah, right on time, my lord. The ship has been blown up according to schedule.”

“Excellent work, Felonious!” The voice of the baron actually sounded pleased. “Congratulations. I will have to speak with my colleagues in the House of Lords to get your recommendation moving through the proper channels. After the sinking has been confirmed, of course.”

Felonious forced his irritation into hiding. “Of course, Baron. I wouldn’t have it any other way.”

The butler stepped into Felonious’ field of vision and spoke quietly. “Do you need anything, my lord?”

“Did your man call you, ‘my lord’, Felonious? You are not getting airs or presenting yourself above your station, are you? You know how the Peers of the Realm feel about that sort of thing.”

“Never, my lord,” Felonious said with a grimace. “You know how these servants can be, holding their beloved master in awe. I will chastise them again after we have completed talking with each other.”

“Well done, old boy. Now as to the reason for this call. I have taken the liberty of sending one of my best men to you on the Zeppelin. He should arrive this afternoon. I was certain you would be successful, but I sent along some extra help just the same. One can never be too sure.”

“Quite,” Felonious said. “Well, it was unnecessary, but thank you. As you no doubt heard, the ship has been sunk.”

“Oh yes,” the voice crackled. “It was the explosion that sounded across the world, to coin a phrase. I will be quite delighted to hear about it on the news later. But I must dash.”

“Before you go, my lord, answer me this. How will I know your man when he arrives?”

“Ah. Excellent question,” the baron said. “He is quite a well-dressed fellow. Carries an interesting walking stick. Has a silver skull on it. He goes by the
nom de guerre
of ‘Mister Y’.”

“Thank you, my lord,” Felonious said, his mind whirling with plans for the agent.

The voice went silent, and Felonious shut off the wireless with a push on the lever. Only after the machine had gone dark and silent did he allow himself a grin, the baron’s reprimand about title already forgotten.

“Bennington! Fetch me some of the 1828 Napoleon brandy.” Felonious tipped the coffee dregs out of his stained and cracked cup and held it up for the butler. “Fill it up. I feel the urge to celebrate.”

The butler was at his arm almost immediately, an expensive crystal decanter of dark liquid in his hands. “I thought you might, sir.” He wrinkled his nose. “Would you like me to strain the brandy through my socks before I pour it into your, ahem, mug, sir?” The wryness of the tall man’s statement barely registered.

“No, that won’t be necessary, Bennington. Just fill it up and keep it full. There’s a good chap. And as I said before, call me, ‘my lord’.”

“Is not here.” Felonious raised an eyebrow at the man. “Do I make myself clear?”

“Excellent! Then you may pour.”

Bennington grimaced and tipped the pristine decanter over the grimy cup, filling it with the dark, expensive liquid.

Felonious tipped the cup back and took a big swig. With a belch, he held the mug out for Bennington to refill. “Top ’er up, old top.”

“As you wish, my lord.” Bennington did as directed and refilled it.

“That will be all, Bennington,” Felonious said with a wave of his hand.

He picked up the spyglass and lifted it to his eye, sloshing some of the brandy on his tunic. It took him a few seconds before he had the spyglass sighted in. When he finally got the image, he sighed happily. Boats surrounded a burning patch of harbor. Fire department patrol boats sprayed torrents of water on the fire, which spread from the destroyed cargo hauler.

Heads bobbed in the water. It didn’t bother him in the least to see the floundering sailors. They were either French or American. It wasn’t terribly likely any Englishmen were out there, and if they were… He shrugged. If they were, they were traitors to good Queen Victoria and the empire and deserved what they got.

He watched for a few moments more, chuckling to himself and guzzling the brandy. Things were going extremely well. At this rate, his tarnished family name would regain its previous luster, and he would be back in the ranks of gentlemen.

Felonious adjusted his gaze to the street in front of his estate and grimaced. The first thing he would do is get a house in a better part of town. No more living near the stockyards and the slaughterhouses.

He laughed under his breath. It would also mean his “estate” would not consist of the rotting remains of machines and old coaches. It would also likely mean a new title for himself. No longer “King of Junk” but something more suitable for a gentleman patriot of the empire. Then perhaps that fop of a baron would serve him as his family served Felonious’ in the not-so-distant past.

The junkyard served him well. It provided a good income and an even better place to hide his life’s work—the overthrow of the American government. And it gave him all the resources he could ever need to experiment and build his machines.

Deep within the confines of the yard lay his workshop, his lab. There his ideas and inventions were created. There the planning and execution of the agenda took place.

He swirled the remnants of the brandy in the mug before gulping it down. He was about to call Bennington for something stronger when he saw the truck chugging and wheezing its way up the street. It would not be long before Felonious could get a firsthand account of the glorious explosion and sinking of the ship bringing that monstrous symbol of American and French defiance.

“There will be no Statue of Liberty,” Felonious muttered. “Not now that I’ve destroyed it!”

He peered down at the struggling steam truck. “Might as well make myself comfortable. Those clowns will be a while before they get here to report.”

Felonious was sitting behind his massive desk when his minions trudged in. The men, both modeled after the great apes with massively muscled frames and sloping foreheads, were a mess. Their clothes were soaked and torn, and the minion on the right lacked part of an ear.

His Bewitching Jewel (A Regency Holiday Romance Book 7) by Mathews, Marly
Operation Sherlock by Bruce Coville
Glimmers by Barbara Brooke
The Kraken King by Meljean Brook
Redeeming Angel by JL Weil
I Love I Hate I Miss My Sister by Amelie Sarn
Cursed! by Maureen Bush
Until by Timmothy B. Mccann
A Hasty Betrothal by Jessica Nelson
The Fiery Trial by Cassandra Clare, Maureen Johnson
Our partner