Read Jackson 07 - Where All the Dead Lie Online

Jackson 07 - Where All the Dead Lie 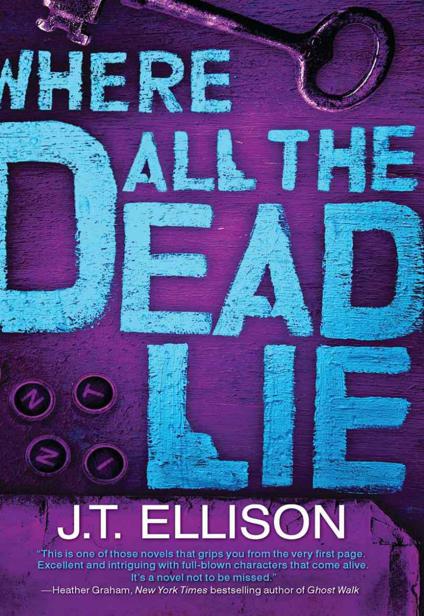 Praise for the novels of J.T. ELLISON

“What J.T. Ellison has done with the city in her award-winning Taylor Jackson books is magnificent… Lovers of mystery and suspense fiction could not ask for more.”

“Outstanding… The police procedural details never get in the way of the potent characterization and clever plotting, and Ellison systematically cranks up the intensity all the way to the riveting ending.”

“Darkly compelling and thoroughly chilling, with rich characterization and a well-layered plot,
All the Pretty Girls
is everything a great crime thriller should be.”

“Mystery fiction has a new name to watch.”

“A tense thrill ride filled with secrets, raw emotion and death, newcomers will love it as much as her longtime fans. After completing this one, you will scream for the next book.”

—
RT Book Reviews,
Top Pick, on
So Close the Hand of Death

“Fast-paced and creepily believable, Ellison’s novel proves that there is still room in the genre for new authors and new cops. There’s no novice showing in
All the Pretty Girls.
It’s all gritty, grisly and a great read.”

“A twisty, creepy and wonderful book…. Ellison is relentless and grabs the reader from the first page and refuses to let go until the soul tearing climax.”

“
So Close the Hand of Death
is a terrific piece of fiction from the shocking first page to the exquisite, staggering end. The talented J.T. Ellison designs a complex plot with multifarious characters who will chill you and make you glad you are reading fiction safely in a cozy spot.”

“
All the Pretty Girls
is a spellbinding suspense novel and Tennessee has a new dark poet. A turbo-charged thrill ride of a debut.”

“Ellison combines a solid and frightening plot with pitch-perfect pacing and terrific primary and secondary characters—including a really sketchy set of murderers—to make
The Immortals
her best effort to date. Don’t miss this one, or the series, if you haven’t sampled it yet.”

“The book is taut, tense and suspenseful. The best part of
All the Pretty Girls,
though, is its breathless pace.”

“Flawlessly plotted, with well-defined characters and conflict, Ellison’s latest is quite simply a gem.”

“What Jeff Lindsay’s
Darkly Dreaming Dexter
does for Miami, Ellison’s Jackson novels do for Music City.”

“Ingenious and first rate… You absolutely must put
So Close the Hand of Death
on your reading list.”

“Gritty and realistic and filled with intense action.”

“The multiple subplots don’t stop Ellison from weaving a tight and powerful story.
Judas Kiss
moves at a rapid-fire rate, its four hundred pages rushing like adrenaline through the bloodstream.”

SO CLOSE THE HAND OF DEATH

ALL THE PRETTY GIRLS

WHERE ALL THE DEAD LIE
J.T. ELLISON

This one’s for Laura Benedict, who saved it for me at the eleventh hour, and my Randy, who made it come alive.

On Green Dolphin Street by Sebastian Faulks
The Angel & the Brown-eyed Boy by Sandy Nathan
Doubletake by Rob Thurman
Bent Out of Shape by Bebe Balocca
Forager by Peter R. Stone
Stiger’s Tigers (Chronicles of An Imperial Legionary Officer Book 1) by Marc Alan Edelheit
The Buenos Aires Quintet by Manuel Vazquez Montalban
Missing Justice by Alafair Burke
Beyond Life by Deb McEwan
For Love of a Cowboy by Yvonne Lindsay - For Love of a Cowboy
Our partner