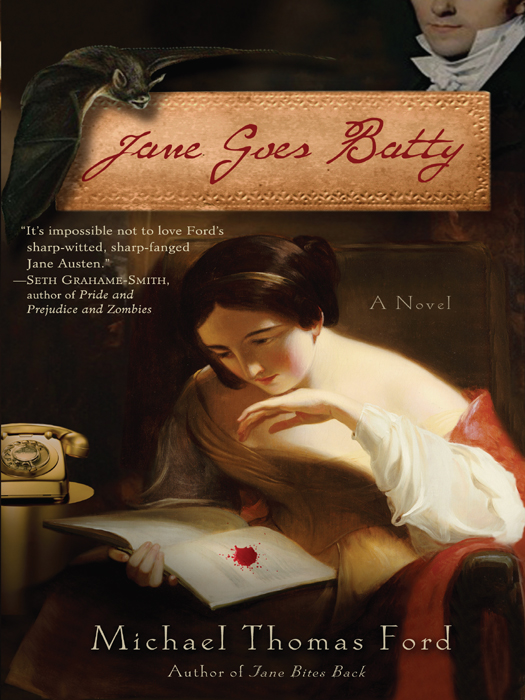 Praise for
Jane Bites Back

“Michael Thomas Ford has struck gold.… The plot is inventive and funny, and the story progresses with the kind of light touch that compares favorably to the … Stephenie Meyer Twilight series. Ford manages to strike just the right tone … and consistently delights.”

“Hilarious … I thoroughly enjoyed reading this book and know you will too!”

“A rollicking good read … Ford is wickedly funny: I cackled my way through half the book, especially the vampire stuff.… I eagerly await
Jane Goes Batty
.”

“Ford approvingly cites Seth Grahame-Smith’s
Pride and Prejudice and Zombies
, but his own mashup is better integrated, more knowledgeable about Austen and considerably funnier.”

“Readers who fall under Jane’s spell will be eagerly awaiting her next adventure.”

“Ford’s Jane is a very fun and funny heroine to root for as she endures the indignities of publishing and bookselling, fends off danger and (perhaps) finds love. Her hilarious smack downs with Violet hint of more madness to come in this first of a series.”

“FIVE STARS! This is one of the most thoroughly entertaining stories I have read in the past few years! I feel that the author succeeded in capturing Jane Austen’s proper personality, as well as how the legendary author would have reacted had she found herself an immortal vampire. Michael Thomas Ford has crafted a vivid, charming and witty tale to delight readers of any age. Absolutely fantastic!”

“A witty and entertaining read with just the right amount of bite … This book will appeal to Austen fans and vampire fans alike.”

“Jane Austen’s novels brim with irony, witticism, and in the end, a gentle reproof or two. It is why I love her writing. Few authors can deliver this dry, deft and wickedly funny style. Michael Thomas Ford is one of them.… Light, campy and a bit Buffyish … Read with tongue-in-cheek and a full glass of suspended disbelief, you will chortle and guffaw until the last bite. This Janeite was truly ‘glamored.’ 5 out of 5 Regency Stars.”

“A well cultivated tale with great character development that holds its own against the real-life history of its main character, Jane Austen.”

“A confection of a novel.”

“Such a fun read. I especially love to imagine Austen duking it out with fellow literary blood-suckers, both literal and figurative.”

“In the past year, I have read quite a few Jane Austen spin-offs, but none quite as original as
Jane Bites Back
by Michael Thomas Ford. What a fantastic premise for a book … I am so excited to say that I really, really enjoyed this book.”

“Vampire Jane is much more human and enjoyable than the chocolate-box saint that many Janeites have created in her image. She’s a lady—but with a bite.… We really liked the book, and look forward to the sequel(s).… In the meantime, Jane, we’ll keep swinging the Cluebat of Janeite Righteousness on your behalf.”

Jane Goes Batty
is a work of fiction. Names, characters, places, and incidents are either the products of the author’s imagination or are used fictitiously. Any resemblance to actual persons, living or dead, events, or locales, is entirely coincidental.

For Nancy,
who will always be older than I am

An Excerpt from
Jane Vows Vengeance

Jane Fairfax gripped the steering wheel so tightly her hands hurt. Two dozen women stood on the sidewalk. Three of them were peering in Jane’s living room windows. All of them were dressed in imitation Regency period dresses. The thought occurred to Jane that instead of adopting the clothing of her time, they might have chosen to copy the tradition of waiting for an invitation before dropping in unannounced.

A tall, thin woman in a ghastly pink pantsuit emerged from a parked tour bus and called out loudly, “Miss Fairfax doesn’t appear to be at home today, but we can still get a lovely photo!”

“It’s Beverly!” said a deep male voice beside Jane with lascivious glee. “We should say hello.”

“We should
not,
” said Jane, giving Byron a withering look.

Jane had seen the woman—and her pantsuit—before. Her name was Beverly Shrop. A retired kindergarten teacher, Beverly had devoted the past five years to becoming the number-one-ranked reviewer of romance novels on a very popular bookselling site. That her “reviews” consisted largely of regurgitating a book’s cover copy mattered little to her readers. Nor did it apparently occur to them that in order for Beverly to have amassed
12,729 reviews she would have had to have read an average of 6.9 books a day.

Beverly had subsequently started a website of her own—ShropTalk.com—on which she not only posted her reviews but also featured interviews with romance writers and kept her readers abreast of what was happening in the world of romantic fiction. This, naturally, had increased her profile even more, to the point where publishers started not just paying attention to her but actively courting her.

When
Constance
was published, Jane had done the requisite interview with Beverly. She’d found the woman dull and her questions insipid (Do you wear any particular perfume when you write? If you were a flower, what would you be?) and had been relieved when it was over. She’d hoped never to encounter Beverly Shrop again.

Beverly, however, was determined to make the most of her talents. This took the form of offering romance-themed tours to readers who wanted to visit the hometowns of their favorite authors or to visit the locations that had inspired their favorite books. She had several itineraries, among them The World of Edith Wharton, Love and Lust in Santa Fe (a surprising number of romance writers lived there), and Jackie Oh!: The People and Places of Jackie Collins.

Most recently Beverly had designed a field trip around writers of New York and New England. Brakeston was included on the itinerary primarily because of Byron, who the previous year had revealed himself to be the real author behind the very popular novelist Penelope Wentz. Complicating matters, he had chosen to use yet another pseudonym in making his announcement, and so the world at large knew him as Tavish Osborn, a name he now adopted for everyday use.

“You just don’t like her because she wasn’t going to include you on the tour until I suggested it,” Byron said.

Jane snorted. “I hardly think so. I don’t like her because she turns literature into a spectacle.”

Byron laughed, earning him another fierce look from Jane. “Literature has
always
been spectacle,” he said. “Do you really think we held all of those literary salons so that we could exchange ideas? Of course not. It was so we could gossip about everyone who wasn’t there. And don’t you remember how James Joyce used to wander through Paris mumbling nonsense words until people recognized him?”

He cleared his throat and in a perfect imitation of Joyce’s impish Irish brogue said, “Spifflepond puppetdingle griffintide! Woozlewoozle crumpetpeal dirf! Why yes, I
am
James Joyce. You enjoyed
Ulysses
? Bless you, madam. Bless you.”

Jane stifled a laugh. It was true. Joyce had often wandered back and forth between La Closerie des Lilas and the Dingo Bar, hoping to be noticed. He denied it, of course, but they all knew.

“It’s hardly the same thing,” she told Byron, still not giving in.

Byron made a vague noise. Much to Jane’s irritation, he reveled in the attention that Beverly Shrop’s tours brought him. He frequently welcomed Beverly and her clients into his home, even offering them tea. Jane, on the other hand, avoided them as much as possible, finding the whole business unseemly. Although even her book publicist had encouraged her to cooperate at least a
little
.

And now Beverly and her minions were preventing Jane from getting into her own house. She seethed. Beverly never stayed less than half an hour, and from the look of things they’d only recently arrived.

“We’ll just have to leave until they’re gone,” Jane said as she began to turn the car around.