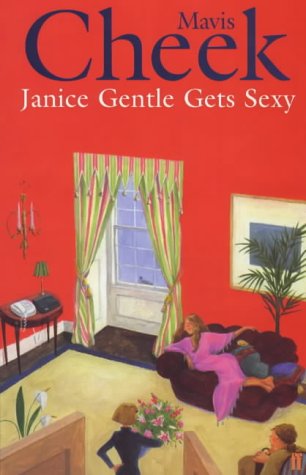 SUMMARY:
Janice Gentle, under pressure from her money-obsessed agent, writes delicate, romantic novels with one goal in mind: to make enough money to find the man she loved and lost twenty years ago.But when Rohanne Bulbecker, a sucessful New York publisher, asks for Janice's help with an extremely marketable idea, it's an opportunity for Janice to abandon her usual predictable genre and try something entirely new . . .

Mavis Cheek was born and educated in Wimbledon, and now lives in West London with her daughter. She worked for the art publishers Editions Alecto for twelve happy years before becoming a mature student at Hillcroft College for Women, where she graduated in Arts with Distinction. Her short stories and travel articles have appeared in various publications and her first book,
Pause Between Acts,
won the SHE/John Menzies First Novel Prize. She is also the author of
Parlour Games, Dog Days, Aunt Margarets Lover, Sleeping Beauties, Getting Back Brahms
and
Three Men on a Plane.

Mavis Cheek is hereby identified as author of this work in accordance with Section 77 of the Copyright, Designs and Patents Act 1988

This book is sold subject to the condition that it shall not, by way of trade or otherwise, be lent, resold, hired our or otherwise circulated without the publishers prior consent in any form of binding or cover o
ther than that in which it is
published and without a similar condition including this condition being imposed on the subsequent purchaser.

Boundless gratitude to both Kate Jones and Henry Dunow, my anchors in the storm.

For Fred and the Fountain

Then you will come to a hill, Bear-No-False-Witness. Turn right away from it, for it is thickly wooded with bribes and bristling with florins. At all costs gather no blossoms there, or you will lose your soul.

organ
P. Pfeiffer, known in the New York publishing world as Midas, was a presence. He made his very big, very bare desk look very small. He imposed. Ms Rohanne Bulbecker, slender as a willow, fair as a lily, youthful as a nymph and tough as an extremely old boot, faced him sitting at her full height. Ambition glowed out of her.

'The late Mrs Pfeiffer was very fond of Janice Gentle books. Do you know Janice Gentle's work, Miss Bulbecker?' 'Certainly,' she said crisply. 'She writes romantic novels.' 'She does.'

'She sells enviably well. She is a bestseller
par excellence?

Rohanne did not flicker as the lilt of French became lost on his lips. 'She certainly does.' A little light dawned. 'You intend to offer for her? I am sure she would come to Pfeiffer's if the price was right.'

He shifted in his seat. He removed the ash from his cigar pensively. 'Mrs Pfeiffer had one criticism of Janice Gentle's books.' He looked at the photograph of Mrs Pfeiffer, deceased, on his desk. This time Rohanne was certain the slight noise was a sigh. 'They contain no sex, Miss Bulbecker. Mrs Pfeiffer was much disappointed by this. She felt that they ought not to
...
ah
...
stop short of the
..
. er .
..
act. I speak plainly.'

Rohanne had the merest tickle of excitement somewhere around her belly button. She pushed on it hard with her hands. When she spoke, her voice was even. 'And you would like me to secure her?'

'Poach her, I believe the English call it. Sentiment aside, it makes very sound business sense.'

'It certainly does,' agreed Rohanne Bulbecker, who always preferred to set sentiment aside.

'Others have apparentl
y tried to persuade her and failed.'

'Why? What makes her resistant to the proposal?'

Morgan P. Pfeiffer shrugged. It was a gesture of genuine loss. 'I have no idea.'

'She
did not say anything. Her agent spoke for her.' 'Her agent?' 'Sylvia Perth.'

Rohanne wrinkled her brow for a moment. 'I know the name. We've not met. Who does she represent?' 'Solely Janice
Gentle
.' 'So why did Sylvia Perth refuse?'

He shrugged again. 'It is clearly not money. Our offer was substantial. We have not
been able to talk to her directl
y because Janice Gentle is recluse. Nobody even knows where she lives. It could be London, it could be anywhere in England. It could even be
Scotland
. . .' He said this last as if it were on a fairly accurate line with Mars. 'Sylvia Perth has total charge and Sylvia Perth is adamant. The answer, she says, will always be no.'

Morgan Pfeiffer shook his head. 'Set aside the money to be made from the book, there were all kinds of marketing-synergy inducements. Janice Gentle would have become a very rich woman.'

'If it is not money, what else could it be?'

He shrugged. 'All I know is what Sylvia Perth tells me. Janice
Gentle
does not
wish
to get sexy . . .'

Rohanne Bulbecker undid the button of her snappy red jacket, adjusted the collar of her pristine blouse, put her hands on her hips and leaned forward in her chair. Anyone used to dealing with her would recognize the signs. 'No?' she said. 'Then I shall just have to persuade her, won't I?'

Out into the cool spring air went Rohanne Bulbecker. There was nothing in the world she liked better than a challenge, the tougher the better. Metaphorically she raised her standard high and marched back to her office to think.

anice
Gentle is travelling on a morning rush-hour tube train somewhere between South Kensington and Holborn. She wears a stone-coloured mackintosh and clutches a plastic bag to what remains of her lap now that her bulky body has managed to squash itself into a seat. Since it is a summer's day of drizzle, the atmosphere in the carriage is made even more unwholesome by the smell of wet fabrics in their various stages of uncleanliness. The herded inmates of the rattling cell seem not to notice the steamy stench and sit or hang strapwards imperviously. They have the glazed appearance of wooden marionettes until the doors slide open to revive them. Even those who read newspapers or books look slack-bodied and unreal, and unlike the travellers of old they neither swap stories nor take pleasure in each other's company.

Only Janice seems alert and on the look-out. She has the wide-eyed look of a fearful but hungry animal that must hunt but would prefer to hibernate. Behind her glasses those pale, blinking eyes of hers rove the compartment, searching the 'faces of her fellow travellers, appraising their physiques, considering their demeanour. It is a restless seeking, from which the seeker takes no pleasure. Here is no lonely middle-aged woman in need of company and conversation. This seeker is unhappy to be here, very unhappy indeed.

In fact Janice
Gentle
finds the whole experience near to torture and wonders whether torture would not be preferable. You can, after all, have a scream while it is going on and nobody minds. But here, in this place, you must not make a sound. Only sit and rock and wait. It is its own
little
world in which you neither acknowledge your companions, nor talk, nor break the mode of isolated being. Only those who must be here are here. The others, the freewomen and freemen, come nowhere near until this time is past.

Janice is here because she has to come. As some must sip seven times from seven glasses before going to bed at night in order to survive the dawn, as some must always bow to a full moon for safety, so must Janice Gentle make a rush-hour tube journey as prelude to beginning a new book. She cannot remember how she first began to need the process, but now, several books on, it is the lodestar, the foundation, and nothing can begin without it. It is not an entirely futile superstition, as arguably are the water and the moon, for, in the tradition of both illustrative and literary creators from Hogarth to Fielding, Picasso to Joyce, Janice draws from life. Her characters she takes not from the street but from the tube, and only when she has found the absolute physical specimen for each character required, can she take herself back to the silent, beige blandness of her Battersea flat, and begin to write in its colourless, closeted tranquillity.

This morning she has her eye on a bright Little Blonde with glistening, early-morning pink lips, which move very slightly as she reads. By coincidence she reads from one of Janice
Gentle
's own books; this is not an unusual occurrence since Janice
Gentle
's work is popular. Indeed, Janice Gentle's work is always in the bestsellers' list and there is no doubt that were she to lean across the gangway divide and prod the Little Blonde on her sharp
little
kneecap and say, 'I am Janice
Gentle
,' the Little Blonde would be overwhelmed and say
ooh
and
ab
and
ob
through her pretty, pink mouth.
'Oob ah and ob!'
she would say, 'I have read
all
your books. I think they are really good.' And she would be astonished that one so fat and plain could create such things.

Janice does not do this. Janice likes anonymity. Besides, Janice is not wholly aware of just how successful she is. She knows that she produces a good many books, she knows that she cannot rest on her laurels no matter how much she would like to, because she knows - or
thinks
she knows - that she has not made enough money to stop yet. Janice has a positive reason for wanting to get to this point. A Quest, a Seeking that will require a great deal of money. According to Sylvia Perth, agent and friend, the day of successful fiscal achievement is still a long way off, though it is, of
course, getting nearer. Frequentl
y and kindly she gees up the flagging Janice. 'You are only as good as your last book,' she says. 'So come along, dear. Let's get our heads down, shall we? I've got to have
something
to offer your publisher in a few months' time. ..'

So - always - the successes of the past are over. So - always -it is time to begin the gruelling process again.

There is some pleasure to be drawn from seeing the Little Blonde Secretary Bird holding her book, since, though unworldly, Janice is not without feeling. That primly perfect face wrinkled its small nose and made a little moue of disgust as Janice squeezed into her seat opposite, and Janice knew that she need look no further for her anti-heroine. Perfection sat opposite her, perfection that was so unflawed as to be dead, perfection that was so very insensate it deserved to die. Janice had never had any of her characters die before, but it was an engaging concept. She studied her anew. Or maybe she could just be seriously damaged? A fall from a horse, perhaps? Victim of a low-hanging branch? A crack of her spine and ever after wheelchair-bound? No — wheelchairs had a kind of kudos, not like in the days of Heidi's Klara. Nowadays it was quite apparent that life did not stop in a wheelchair, nor did love and happiness. Better to make her bedridden, then. Mentally Janice wipes her hands. Yes, that'll do nicely for her. And no bedside scenes of contrition, either, to soften the case. In real life, she opined, such things scarcely happened, anyway.

Breathe into Me by Fawkes, Sara
Jam and Jeopardy by Doris Davidson
The Cost of Commitment - KJ2 by Ames, Lynn
In Too Deep by Samantha Hayes
Heart of Ice by Alys Clare
Midnight Sons Volume 3 by Debbie Macomber
Dangerous Dream by Kami Garcia, Margaret Stohl
Fell (The Sight 2) by David Clement-Davies
100% Wolf by Jayne Lyons
Faye's Spirit by Saskia Walker
Our partner