Jeeves and the Wedding Bells 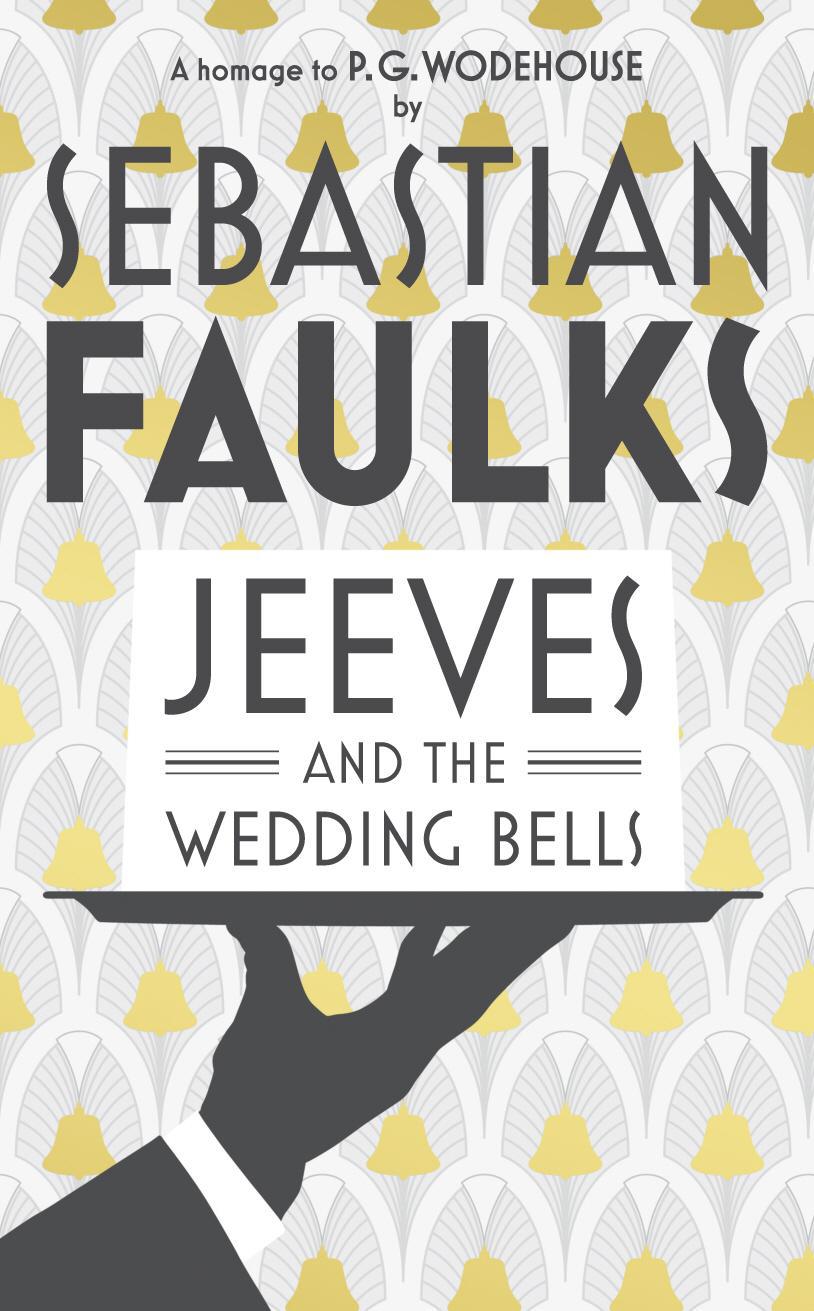 Bertie Wooster, recently returned from a very pleasurable sojourn in Cannes, finds himself at the stately home of Sir Henry Hackwood in Dorset. Bertie is more than familiar with the country house set-up: he is a veteran of the cocktail hour and, thanks to Jeeves, his gentleman’s personal gentleman, is never less than immaculately dressed.

On this occasion, however, it is Jeeves who is to be seen in the drawing room while Bertie finds himself below stairs – and he doesn’t care for it at all.

Love, as so often, is at the root of the confusion. Bertie, you see, has met Georgiana on the Côte d’Azur. And though she is clever and he has a reputation for foolish engagements, it looks as though this could be the real thing. However, Georgiana is the ward of Sir Henry Hackwood and, in order to maintain his beloved Melbury Hall, the impoverished Sir Henry has struck a deal that would see Georgiana becoming Mrs Rupert Venables.

Meanwhile, Peregrine ‘Woody’ Beeching, one of Bertie’s oldest chums, is desperate to regain the trust of his fiancée Amelia, Sir Henry’s tennis-mad daughter.

But why would this necessitate Bertie having to pass himself off as a servant when he has never so much as made a cup of tea? Could it be that the ever-loyal, Spinoza-loving Jeeves has an ulterior motive?

Evoking the sunlit days of a time gone by,
Jeeves and the Wedding Bells
is a delightfully witty story of mistaken identity, a village midsummer festival, a cricket match and love triumphant.

Sebastain Faulks’s books include the bestsellers
A Possible Life
,
A Week in December
,
Human Traces
,
On Green Dolphin Street
,
Charlotte Gray
and
Birdsong
.

In his acclaimed 2011 book
Faulks on Fiction
, which accompanied his series for BBC Two, Sebastian Faulks wrote, ‘If I were to be quite honest, I suppose I would have to admit that a scene in
The Mating Season
is probably my favourite in the whole canon of English literature.’ As a lifelong fan of P.G. Wodehouse, he was delighted to be asked by the Wodehouse Estate to write a new novel using the immortal characters of Jeeves and Wooster.

P.G. Wodehouse wrote more than ninety novels and some three hundred short stories over seventy-three years. Perhaps best known for the escapades of Bertie Wooster and Jeeves, Wodehouse also created the world of Blandings Castle, home to Lord Emsworth and his cherished pig, the Empress of Blandings. His stories include gems concerning the irrepressible and disreputable Ukridge; Psmith, the elegant socialist; the ever-so-slightly unscrupulous Fifth Earl of Ickenham, better known as Uncle Fred; and those related by Mr Mulliner, the charming raconteur of The Angler’s Rest, and the Oldest Member at the Golf Club.

In 1936 he was awarded the Mark Twain Medal for ‘having made an outstanding and lasting contribution to the happiness of the world’. He was made a Doctor of Letters by Oxford University in 1939, and in 1975, aged ninety-three, he was knighted by Queen Elizabeth II. He died shortly afterwards, on St Valentine’s Day.

A Trick of the Light

The Girl at the Lion d’Or

A Week in December

To the memory of P.G. Wodehouse – and for all those who have laughed at and treasured his books.

THIS BOOK IS
intended as a tribute – from me, and on behalf of any others who don’t think it falls too lamentably short of the mark – to P.G.Wodehouse: a thank you for all the pleasure his work has given. I have been reading him with joy and admiration for almost half a century. I am no expert or mastermind on things Wodehousean; I am just a fan.

The great man’s descendants hope, I know, that a new novel may help to bring the characters of Jeeves and Bertie to a younger readership – that lucky group of people who have yet to open
The Mating Season
or
Right Ho, Jeeves
. I hope so too, and I envy them the joys that lie in store.

To the old hands, meanwhile, I would say only this: that yes, I did understand the size of what I had taken on; and yes it was as hard as I expected. Wodehouse’s prose is a glorious thing; and there’s the rub. I didn’t want to write too close an imitation of that distinctive music for fear of sounding flat or sharp.
Nor did I want to drift into parody. What I therefore tried to do was give people who haven’t read the Jeeves books a sense of what they sound like; while for those who know them well I tried to provide a nostalgic variation – in which a memory of the real thing provides the tune and these pages perhaps a line of harmony.

I would like to thank Gillon Aitken, Peter Straus, Jocasta Hamilton, Keith Kahla, and Gail Rebuck for easing it all into print, and Edward Cazalet, P. G. Wodehouse’s step-grandson for his encouragement.

I hope that readers of this story will be encouraged to go back to the peerless originals, and thence to a brighter world.

I WAS WOKEN
in the middle of the night by what sounded like a dozen metal dustbins being chucked down a flight of steps. After a moment of floundering in the darkness I put my hand on the source of the infernal noise: the twin copper bells on top of a large alarm clock. There followed a brief no-holds-barred wrestling bout before I was able to shove the wretched thing beneath the mattress.

It was a panting and lightly perspiring B. Wooster who then consulted his wristwatch to find that it was in fact six o’clock – the appointed hour at which I was to throw off the bonds of slumber and rise to tackle my new duties.

This was a dashed sight harder than it sounds. Easing the person to an even semi-recumbent position caused pains to shoot across the small of the back. Whoever had designed the palliasse on which I had lain these seven hours had clearly been of the opinion that nature’s sweet restorer, as I have heard
Jeeves call it, can get the job done in five-minute bursts. It required a steadying grip on the bedstead before I could cross the bare boards and don the dressing gown. It’s possible that a sharp-eared observer might have heard a few groans as, sponge bag in hand, I headed down the passageway towards the servants’ bathroom.

Mercifully, I seemed to be the first to the ablutions. Hot water came from a geyser in a boiling trickle over the bath, but in the basin the H and C taps might more accurately have been labelled ‘Cold’ and ‘Frozen’. It was a haggard Bertram who stared back from the glass as he plied the morning steel and sponged the outlying portions. I dried off with a strip of material less like a towel than a yard of well-used sandpaper.

It’s funny how quickly one gets used to certain things in life. At school we had been compelled, on pain of six of the juiciest, to keep a keen eye on our kit and know at all times where the socks (grey, six pairs) and footer bags (navy blue, two pairs) were to be found. The services of Tucker, my accommodating scout at Oxford, however, and several years of Jeeves’s care had left me rather vague in such matters. To say it was something of a trial to dress myself in the uniform of a gentleman’s personal gentleman would be an understatement. Eventually, after several attempts and some pretty fruity language, the shirt, collar stud and tie achieved some sort of coming-together, after which the outer garments were a breeze. Pausing only to rub the shoe on the back of the trouser, I went gingerly out on to the landing and down the back staircase, which gave off a powerful whiff of lime wood.

There was a lengthy passageway that led to the kitchens. I pushed at the double doors and entered the cook’s domain with as near as I could manage to a spring in the step. To fill the kettle and bung it on the range was the work of an instant; the problems began with an attempt to locate pot, tea leaves, milk and so forth. I had never previously paused to think just how many items go into the making of the morning cupful. I opened a hopeful-looking cupboard to be confronted by a variety of what may have been fish kettles.

I pushed off into the scullery, where I spied a bottle of milk with a paper twist. A quick sniff established that it was not of recent origin and I was beginning to feel that I was not cut out for this sort of thing when I heard footsteps outside.

Fearing the cook, Mrs Padgett, would not take kindly to an intruder, I made as if to exit towards the dining room, but to my surprise it was the housekeeper, Mrs Tilman.

‘Mr Wilberforce! Goodness, you are the early bird!’

‘Yes, what ho! A lot of worms to catch, don’t you know. I was just looking for the tea leaves.’

‘Are you taking up tea for Lord Etringham? Isn’t it a bit early?’

‘Seven o’clock was what he told me.’

‘I think seven-thirty’s quite soon enough. Why don’t you get on with some shoe-cleaning and let me make the tea in a moment. Goodness me, you’ve put enough water in the kettle for a regiment of soldiers. Off you go down to the butler’s pantry. You’ll find polish in the cupboard. And you brought down Lord Etringham’s shoes last night, didn’t you?’

‘I did indeed. Two pairs of them.’

I left the tea-making in the hands of this excellent woman and got down to some spit and polish work on the black Oxfords and the brown brogues, size eight, that I had scooped up the night before. In my experience, the butler’s pantry, in addition to corkscrews, candles and other odd bits of chandlery often holds a bottle or two of the right stuff, but it was too early in the morning even for a constitution as strong as mine. The thought, however, bucked me up a little. I wouldn’t say that a song rose to the Wooster lips as I worked, but I went about the buffing and shining with a certain gusto.

Bear with Me (Bear Mountain Patrol Series Book 1) by Addae, Sydney
Five Past Midnight by James Thayer
The Bones of Old Carlisle by Kevin E Meredith
Happy Families by Tanita S. Davis
Sea of Love: A Bayberry Island Novel by Susan Donovan
Under My Thumb (Serenade Series #1) by Reynolds, Abby
The Girl in the Painted Caravan by Eva Petulengro
Quicksilver (The Forensic Geology Series, Prequel) by Toni Dwiggins
Mañana lo dejo by Gilles Legardinier
The Case of the Ruby Slippers by Martha Freeman
Our partner