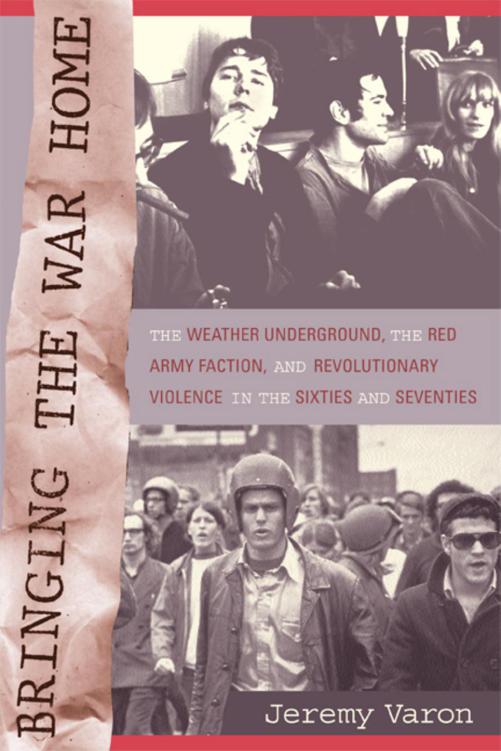 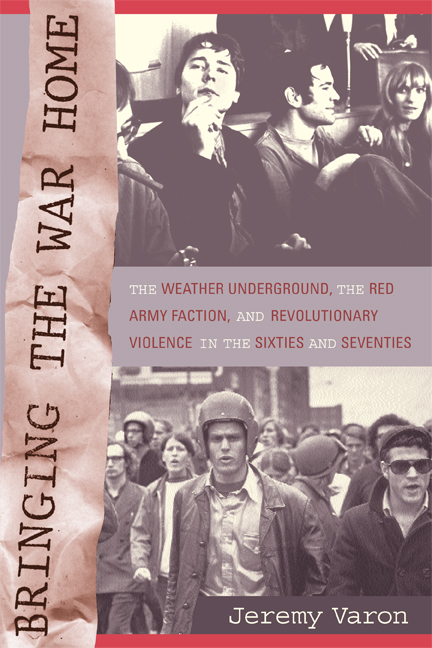 The publisher gratefully acknowledges the generous

contribution to this book provided by the General

Endowment Fund of the University of California Press

in the Sixties and Seventies

The Regents of the University of California

Bringing the war home : the Weather Underground, the Red Army Faction, and the revolutionary violence of the sixties and seventies / Jeremy Varon.

To the loving memory of my mother,

In Hell they say Heaven is a great lie.

1. “Agents of Necessity”: Weatherman, the Red Army Faction, and the Turn to Violence

2. The Importance of Being Militant: The Days of Rage

and the Critical Mass

4. The Excesses and Limits of Revolutionary Violence

5. Deadly Abstraction: The Red Army Faction and the Politics of Murder

The “spirit of the sixties” has always seemed to me to involve at its core individuals with shared passions working together in pursuit of common goals. Scholarly work, while not entailing quite that kind of cooperation, is far from an isolating endeavor. Indeed, my project has been shaped by many scholars, friends, and others, through whom the rewards of cooperation and something of the spirit of the era I have tried so hard to understand has brightly shone.

Professor Dominick LaCapra of Cornell University played the central role in the conception and execution of this book. He has set a standard for intellectual intensity and professionalism I shall always take as my guide. At Cornell, he headed a team of professors who coached and challenged me: David Bathrick, Laurence Moore, and Michael Steinberg. My friends and colleagues in graduate school are owed equal thanks: Ajay Agrawal, Paul Apostilidas, Michael Doyle, Jeannie Moorefield, Libbie Rifkin, Douglas Usher, and Greg Wawro. Juliet Williams’s intellect and character deeply inform all aspects of the project.

sität in Berlin, the Hoover Institution, and the research libraries at Cornell University, Stanford University, and the University of California at Berkeley. My colleagues at Drew University have made the transition into professional life a happy one, while supporting me in completing this project.

Monica McCormick of the University of California Press has been an ideal editor, grasping right away the “essence” of my project and guid-ing it to completion with unwavering care. Her staff at the press has been impeccable. Peter Dreyer is owed special thanks for his stellar job in refining the text. Sam Green, a filmmaker working on similar themes, provided assistance and encouragement; it was always a comfort to match impressions and to see our projects as complementing each other. I extend thanks also to Lynne Okin, Alan Trist, and Meegan Lee Ochs for granting me permission to quote the song lyrics of Bob Dylan, the Grateful Dead, and Phil Ochs, respectively. The music of the 1960s was woven into the events of the era—even when it did not provide direct political and social commentary—and served as a constant companion as I studied, thought, and wrote.

This project, by its nature, has drawn me far beyond academia into the worlds of political activism, both past and present. I am immensely grateful to the women and men formerly of the Weather Underground who spoke to me with great honesty and insight about their experiences.

I hope to have honored the trust they placed in me by dealing responsibly and fairly with their histories.

Contemporary activists—Brooke, David, Stuart, Tyler in New York, all those in the Philly house, and my dear friends Jordan Ash and Jonathan Rosen—have reminded me that “making history,” or simply “making a difference,” as the sixties generation did, is the far greater challenge than studying the past. Habib Gharib has uniquely embodied for me the ideal of the scholar-activist, demonstrating that good acts start with sound thinking.

I have the privilege of counting as colleagues, friends, companions, and family people of great caring and intellect, who shared generously their ideas, advice, and editorial talents. John McMillian, inspired by the same intellectual callings, has my enduring loyalty and respect. Knowing Anne Kornhauser has been a recent blessing, for the text and in my life. My sister Elizabeth Varon and her husband William Hitchcock, both history professors, blazed the trail I now walk. Barbara and Ben Varon, my parents, provided more than familial love, engaging the substance of the project and the intellectual and political dramas it spawned.

Students for a Democratic Society

University of California at Berkeley

All over the world during the 1960s, movements led by the young radically challenged existing forms of political and cultural authority. With great optimism and energy, they attacked governments, militaries, institutions, ideologies, and common ways of thinking, feeling, and acting.

The year 1968—that potent symbol of the 1960s as a whole— can be evoked by reciting the places where left-wing rebellion erupted with special force and drama: Paris, Prague, New York, Tokyo, Berlin, Saigon, Mexico City.1

New Leftists were not only implicitly united across national boundaries by their shared opposition to oppression, their commitment to democratic participation, and their use of militant direct action as a means of protest; they were also
consciously
internationalist. In what amounted to a global crusade, students and youths throughout the world protested the Vietnam War. They assimilated dimensions of Black Power and Third World revolutionary ideologies, in which they saw near-universal appeal and relevance. They created an international protest culture organized around master texts, chiefly those of Karl Marx, Mao Tse-tung, and Herbert Marcuse, and “revolutionary” icons like Che Guevara and Ho Chi Minh. And, in instances, they responded directly to the triumphs and failures experienced by their foreign New Left comrades. In their wildest dreams, they saw themselves waging a revolution that would overthrow both the U.S.-led imperialism of the West and the ossified, bureaucratic communism of the East.

Despite the global nature of 1960s rebellion, little has been done to probe the New Left’s internationalism—the common aspirations of radicals in different settings and the synchronic quality of New Left activism generally. Instead, each country touched by New Left protest has produced a literature on the meaning and legacy of its “own” 1960s. As a result, neither scholarship nor popular commentary on the 1960s has helped us much to move beyond the imprecise sense that New Leftists forged an international zeitgeist of radical rebellion, or the simple observation that in a number of countries, similar things seemed to have happened at roughly the same time.2

The Waltzing Widow/Smith by Joan Smith
The Awakening (The Stones of Revenge) by Sargeant, Justin
Razzmatazz-DDL by Patricia Burroughs
TITAN by Stewart, Kate
Seraphina by Rachel Hartman
Michael Connelly by The Harry Bosch Novels, Volume 2
Blood of Cain (Sean O'Brien (Mystery/Thrillers)) by Lowe, Tom
The Wild Mustang (Dale Jackson Series Book 1) by Anders, JD
Stranded with a Spy by Merline Lovelace
The Mystery of the Blue Train by Agatha Christie
Our partner