Read Jessie Belle: The Women of Merryton - Book One Online

Jessie Belle: The Women of Merryton - Book One 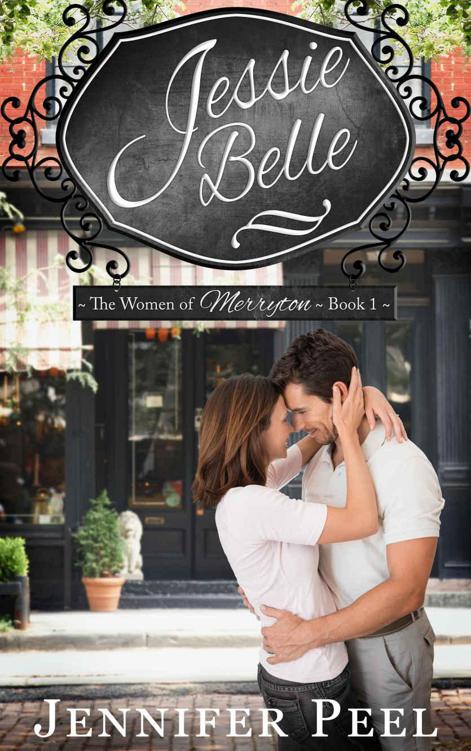 The Women of Merryton
–
Book One

This eBook is licensed for your personal enjoyment
only. This eBook may not be re-sold or given away to other people. If you would
like to share this book with another person, please purchase an additional copy
for each reader or share it through the Kindle lending feature. If you
’
re
reading this book and did not purchase it, or it was not purchased for your use
only, then please purchase your own copy through Amazon Kindle. Thank you for
respecting the hard work of this author.

To Berta, thank you for being
one of my biggest fans even before I had fans.

“Come
in,” I called toward my closed office door, trying not to sigh. Somebody always
needed something.

The
door slowly opened and a head popped in. “Jessica.”

I
sat up a little straighter. I wasn’t expecting to see my husband, of all
people. That probably doesn’t sound right and it wasn’t, but unfortunately
that’s where we were in our relationship. I did end up sighing, not because he
was there, but because I was surprised about it.

“Am
I interrupting anything?” he asked nervously.

I
closed my laptop with my new menu designs and gave him my full attention. “Is
everything okay?”

He
walked in carrying a beautiful vase filled with perfectly shaped, pink roses.
He didn’t answer until he was perched on the edge of my desk facing me with the
vase of flowers stretched out towards me. “These are for you.”

I
cautiously reached out and took them, but set them on my desk immediately. I
barely even smelled how fragrant the suspicious flowers were. “What’s wrong?”

He
cocked his handsome head at me. For a moment I ached for him and my stomach
even fluttered. After more than thirteen years together he could still get to
me. He edged closer and reached for my hand. I knew something was definitely
off. He hadn’t shown me this much affection in weeks, maybe even months.

“Why
does something have to be wrong for me to visit my wife and bring her flowers?”

I
looked up into those gray eyes. No matter the state of our marriage I could still
read them and there was trouble in them. I pulled my hand away. “You just
haven’t in a very long time and …”

He
reached for my hand again. I looked down at our hands that I used to think were
made to match. “I’m sorry,” he said. “I should be better at that.”

“So
why are you here?” I choked out. I don’t know why I felt like crying.

He
played with my wedding ring by twisting it. “Jess …”

I
knew it wasn’t good. He rarely called me Jess anymore. While everyone called me
Jessie, he always called me Jessica. Jess was only used in moments of either
great shows of love, or when the news wouldn’t be to my liking. I knew it
wasn’t the first. Our relationship had been too strained lately. I braced
myself. Unfortunately, it was not near enough for the bombshell that he would
drop on me and our already tattered marriage.

He
edged closer and pulled me up out of my chair and held me. I stood there stiffly
for a moment. I had missed him, which was silly considering we shared a home -
or I should say house - together. It had been anything but homey recently. We
were more like two ships passing in the night, or even worse, indifferent
roommates. I sank into him even though I knew something was off. He drew me
closer and rubbed my back.

I
breathed him in slowly. He smelled like cedar. He must have been working on
building a deck. Now that we were into April, the temperature was getting
warmer and his construction company would be busy with outdoor projects.

He
reached up and stroked my hair that Cheyenne had talked me into cutting. I
loved my friend and hair stylist, but she was bossy and had been ever since
junior high school. But in the end she was right. The chin-length cut, styled
with beach waves and caramel highlights against my dark brown hair, was the
best cut I had ever had. It had given me a much-needed self-confidence boost.

I
felt him soaking me in as he continued to touch my hair. “I had a phone call
today from Sabrina Olson.”

I
pulled back and looked into my husband’s more than worried eyes. “Why would my
old roommate call you?” I hadn’t thought about her in ages. We had only lived
together for six months while I completed my internship as a pastry chef at the
Montagne Resort, which was modeled after a French chateau above Salt Lake City.
I had just received my bachelor’s degree in culinary management and my parents
suggested I do an internship before I came to work for my mom at Jessie Belle’s
Café. Oddly enough, I was running a business named after myself. Those six
months at the resort were some of the best times of my life. It’s where I met
the man that nervously held me in his arms. “Blake?”

We
were eye level with him perched on my desk and me standing. He leaned in and
rested his forehead against mine. I had missed him doing that. “Jess, I don’t
know how to say this to you.”

I
suddenly felt ill. I wasn’t sure why. Blake didn’t even like Sabrina and we
hadn’t seen her in years. I didn’t particularly care for her, either. She had
also been interning at Montagne as a pastry chef, but she was careless and
sloppy. Her habits spilled over into the small cottage we shared on the resort
property. She had no respect for my personal things and used them at her
leisure without ever asking and she was always bringing around her less than
ideal boyfriend, Hal. I had been surprised a place like Montagne would place
her for an internship, but she was beautiful and she could charm her way into
or out of anything. But not with Blake. He had no patience with her and I
frequently lamented to him about having to live with her.

He
reached up with both hands and placed them around my face. They felt warm, but
slightly rough and calloused. It was a side effect of his job. I never minded,
though. “Jessica, remember when we broke up?”

How
could I forget?
It was almost thirteen and a half years
ago and I could still feel the sting of it. I knew I should be long over it,
but unfortunately it had hung over our marriage. That was my fault, not his.
Whenever something went wrong in our marriage I always fell back on that moment,
the moment he didn’t want me. It was a crutch I knew I needed to throw away,
but like all bad habits, it was hard to give up. Even now I could recite with
perfect memory, “Jessica, now that you’re going home, I think we should end
what we had, here and now.” Had? I questioned. Just the day before and the many
days before that he had been professing how much he loved me. We had been
discussing how we would see each other when I went back to Merryton in my home
state of Colorado while he finished construction project at Montagne. I thought
we had it all worked out, and then suddenly he was done.

“I
remember the night
you
broke up with me,” I said in return.

He
pulled back, but still held my face in his strong hands. There was no
we
in that equation and he knew it. He knew he had broken my heart that night. “I
wish I hadn’t,” he said quietly. “There is also something else I regret, and I
probably should have told you before now.”

I
didn’t like where this was going. I pulled away, but he reached out for me
again. “Please, I need you.” He sounded scared.

In
all of our time together this was only the third time I had ever seen him
scared. The first time was when he followed me to Colorado a month after he
broke things off with me and begged for me to forgive him. The second time was
last year when—I couldn’t think about it, at least not now, which was weird,
since it was all I thought about anymore.

I
let myself fall against him again and he held me more firmly than before.
“Jess,” he whispered in my ear.

“Sabrina
is sick. Quite sick, in fact. She has stage four melanoma.”

“Oh.
That’s terrible, but I don’t understand why she would call and tell you that.
How did she even know how to contact you?”

“She
found my company’s website.” We had his and her companies.

I
stiffened and he held on for dear life. I could feel him take in a large breath
and let it out. I could even feel his heart pounding.

“There’s
a possibility she may be mine.”

I
pushed away from him as hard as I could. So hard I almost fell, and he reached
out to steady me.

“Jessica.”
His eyes pleaded with me.

I
couldn’t breathe. This had to be some sick joke. I knew it wasn’t, because out
of all the things in the world, Blake would never joke about this, not under
the circumstances. Not after everything I had lost—we had lost. I sat down in
my chair and I noticed I was shaking.

“Please
listen to me,” I heard my husband beg.

I
rested my hands on my legs, looked down, and focused on my breathing. I felt
like passing out.

I
couldn’t look up. “How could it be anything but?”

He
knelt in front of me and tipped my chin up. “Jessica,” he spoke slowly, “I
would never be unfaithful to you.”

My
tears
spilled over and dripped down on his hand.

“You
believe that, right?”

“I
don’t know what to believe anymore.”

He
looked about as defeated as I had ever seen him. “It was a one night stand, not
even that, and you and I weren’t together when it happened,” he said almost
angrily.

I
wasn’t following and my eyes must have said so.

“After
I broke up with you and you left, I swung by your place to pick up the box you
said you left me. Sabrina was there and one thing led to another. It was
stupid, I know, and I regretted it immediately, but that night made me realize
I never wanted to be with anyone but you for the rest of my life.”

It
was only getting worse for me. “So you’re saying you only came back to me
because you slept with another woman?”

He
rubbed his face with his hands. He was irritated now. “No, Jessica. How could
you think that?”

I
stood up, maneuvered around him, and grabbed my bag. I couldn’t take any more.

“Where
are you going?”

He
tried to hide his look of displeasure. “Please come home with me. We need to
talk.”

“What
else is there to say? You have a child that isn’t mine and you slept with my
flighty roommate whom you claimed you couldn’t stand. How many other kids do
you have running around? Is this why you don’t want to adopt?” I practically
yelled.

His
eyes seared into mine, but he didn’t say a word. He took one look at me and
turned and walked out the door, slamming it along the way.

I
took one look at the beautiful flowers on my desk and threw them in the trash.
Then I did the one thing I promised I would never do: I ran home.