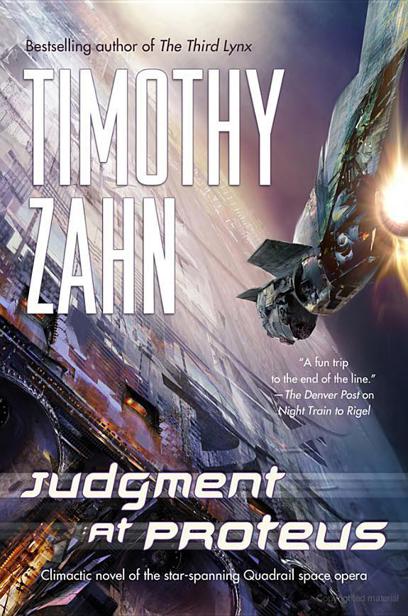 The Filiaelian facing me was a bit bigger than most of those of his species, a couple of centimeters taller than I was and about ten kilos heavier. There was a sheen of sweat on his long, horse-like face, and the dark eyes boring out at me had a deadly earnest expression to them.

The expression, and the face, shook briefly as the hand gripping my throat slammed my head and back hard against the display window of my first-class Quadrail compartment.

From my right came a muffled gasp, and my eyes flicked in that direction. Bayta, my companion and partner in this quiet war I’d joined nearly two years ago, was standing across the room watching us, her eyes wide, one hand gripping the edge of the partially open divider that separated the halves of our double compartment.

I shifted my attention back to the long Filly face bare centimeters from my own.
Logra
Emikai had once been a cop, genetically engineered for loyalty to the rulers of his species. He had probably also been engineered for strength, agility, and God only knew what else.

The hand around my throat tightened a little. “Well, Mr. Compton?” he asked softly.

His other hand was wrapped around my right biceps, effectively putting that arm out of action. But I still had my left. Nodding my head forward, pressing my chin hard against the top of his hand, I cocked my left arm at my hip and drove a short jab into his upper arm just above the elbow.

Abruptly, the pressure on my throat went slack. I grabbed Emikai’s half-paralyzed hand, twisted it hard at the wrist, and swiveled on my left foot to bend the arm over, forcing him to bow forward at the waist. “Well,
Logra
Emikai?” I countered.

“Thanks,” I said, letting go of his hand. “I take it I hit the nerve junction properly that time?”

“Indeed,” he confirmed as he straightened up, massaging his right upper arm where I’d hit it and shaking his right hand where my chin had pressed into another sensitive spot. “But you should free your right arm from my left before attempting to turn me over. Otherwise I might pull you over with me.”

“Yes, but it might also give you enough time to get your balance back,” I pointed out. “Anyway, if this had been a real fight, I’d have followed up with a kick to your torso.” I snapped a short kick to the area around his heart, stopping my foot a couple of centimeters short of his body. “Right about there.”

“Yes, that would put a normal opponent into the dust,” Emikai agreed. “But bear in mind that a professional fighter might have had his heart sac strengthened against such attacks.”

I grimaced. He was right, of course. A Filly pro might boast a strengthened heart sac, some extra bone in his fists, and enhanced brow ridges to protect his eyes, and might even have gone to the effort to have his more vulnerable nerve junctions surgically moved to entirely different locations. With the Filiaelian passion for genetic manipulation, a Filly with sufficient money and patience could remake himself into almost anything he or his doctor could imagine.

Which was precisely why we were in this mess to begin with.

“Painful,” she said, her eyes smoldering as she looked at Emikai. In her opinion—which she hadn’t been at all shy about sharing with me over the past few days—our sparring sessions were way more realistic than they needed to be. Certainly more realistic than she liked.

“Pure illusion,” I assured her. Actually, my various bruises and strained muscles were in full agreement with her. But once upon a time I’d been a Western Alliance Intelligence agent, and Emikai and I both knew that the only way to learn hand-to-hand combat techniques was by actually practicing them. “Do we have time for one more?” I asked her.

“I don’t think so,” she said, a little too quickly.

Her lip twitched. She really
did
hate these sessions. “Forty-five minutes.”

“So plenty of time.” I turned back to Emikai. “I want you to try the throat lock you put me in back on the super-express train.” I turned my back on him. “I think I’ve come up with a counter.”

His right arm snaked around my neck, his left arm linking with it, his left hand pushing my head forward against the forearm already pressed against my throat. His left foot slapped lightly against the back of my left knee, just hard enough to break my balance and send me to my knees on the floor. He followed me down, maintaining his grip, leaning forward and half over my shoulder.

That was how it had worked the last time he’d pulled this move on me. This time, I had something new to bring to the table. My knees had barely hit the floor when I threw myself forward, pulling Emikai off balance and tumbling over on top of me. As my chest hit the floor I rolled onto my left side, bringing my right elbow up into a shark-fin angle.

And as he belatedly let go of my neck in an effort to break his fall, his torso slammed onto my extended elbow.

In a real fight I would have kept the elbow extended, letting its impact send a shock wave through his heart sac and hopefully ending the fight right there. In this case, since Emikai wasn’t an actual enemy and I furthermore didn’t want to lug his twitching carcass all the way back to third class, I let my arm fold back down again, with the result that instead of bouncing off my elbow in agony he merely landed full length on top of me.

Fortunately, his extended arms took most of his weight, with the result that we both merely oofed in unison instead of having the air knocked out of us. “Impressive,” he said, rolling off and standing up again. “Aside from the obvious difficulty that if it succeeds you’ll be trapped beneath your opponent.”

“True,” I agreed, getting to my feet and massaging my throat where he’d been gripping it. Maybe Bayta was right about Emikai being a bit on the enthusiastic side. “Given that the alternative is to be comfortable but dead, it seems worthwhile.”

“A definite point.” He paused, tilting his head thoughtfully to the side. “Since we speak of death, what do you intend to tell the director and
santras
of Proteus Station about
Asantra
Muzzfor? They will want answers.” He eyed me closely. “More complete answers, I hope, than those you have given to me.”

“What an odd question,” I said, hiding my mild surprise. It had been over four weeks since Muzzfor died his violent death aboard the super-express Quadrail traveling from the other end of the galaxy, and nearly two weeks since Emikai and I had begun these occasional sparring sessions. Not once in all that time had the Filly asked me for details on exactly how Muzzfor had died.

Now, with our train forty minutes from journey’s end, he was suddenly bringing up the subject? “I intend to tell them the truth, of course.”

“Good,” he said as he retrieved his tunic from where he’d laid it on my bed. “The director and
santras
would not take well to being lied to. By you, or by anyone else they choose to question.”

“That
anyone else
being you?”

“I am a former enforcement officer, and was aboard the train where
Asantra
Muzzfor died,” he said. “That makes me a logical person to question.”

“Only since you didn’t actually witness the event, most of what you can tell them will be hearsay,” I reminded him.

“That, plus my trained assessment of the other persons involved.”

I inclined my head to him. “Hence, the exercise sessions?”

His cream-colored nose blaze didn’t lighten or darken, the usual Filly indicators of sudden emotional change. Emikai already knew or suspected that
I
knew or suspected his reason for suggesting these little playdates. “Yes,” he said without apology or embarrassment.

“And what do you intend to tell them?”

“An intriguing analysis,” I said, trying to keep my voice casual. Damned if he hadn’t hit it squarely on the head. “But I
do
intend to tell them the truth.”

“I will look forward to hearing it,” he said, finishing with his tunic and wrapping his belt and belt bag in place. “I go to prepare the others for departure. Until then, farewell.”

“Farewell,” I said. He stepped to the door, tapped the release, and disappeared into the corridor.

I crossed to the door and locked it behind him. “You aren’t really going to tell them the truth, are you?” Bayta asked.

Our train pulled into the Ilat Dumar Covrey station exactly on time, which was the way things always worked with the Quadrail system. The Spiders, creatures encased in metal globes carried around on seven spindly legs, kept the trains running perfectly as they facilitated the transfer of passengers, cargo, and information across the galaxy with a calm and understated efficiency.

And as Bayta and I headed across the platform, making our way past Fillies, Shorshians, and assorted other non-Humans, I thought about truth.

It was something everyone wanted, or at least said they did. Emikai wanted it, the director and
santras
aboard Proteus Station wanted it, and most of the people we were passing here in the station probably thought they wanted it, too.

Did they really want to know about the Modhri, the group mind that had started out based in exotic Modhran coral and was now also embedded in thousands, perhaps even millions, of unsuspecting beings? Did they want to know that any of their friends might have a Modhran polyp colony inside him or her, linked telepathically to all the other nearby colonies and coral outposts to form a group-mind segment? Did they want to know that that same friend’s words or actions might actually be inspired by subtle suggestions whispered to him or her by that mind segment?