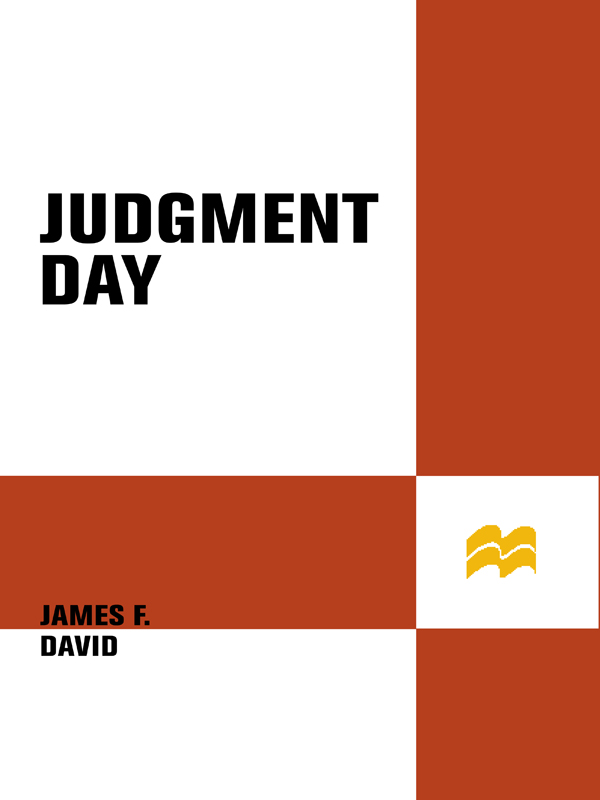 Ship of the Damned

Before the Cradle Falls

Christians in the Crossfire
(with Mark McMinn) 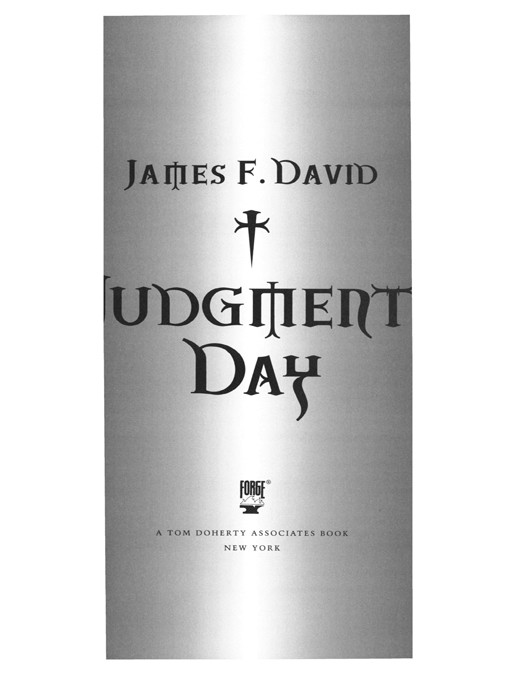 I want to thank my wife, Gale, for being the first to read my manuscripts. Seeing the story through the mess in the first version isn't always an easy task. Thanks to my agent, Carol McCleary, for being even more optimistic than I am. Thanks to my editor, Bob Gleason, who never ceases to surprise me with the breadth and depth of his knowledge. Special thanks to those who read earlier versions of this manuscript, including Glenn Moran, Becky Ankeny (even though you didn't finish it), and Beth Molzahn. Your comments were very helpful. Abby, Katie, and Bethany, by now you know your dad has a very odd imagination. Finally, welcome to the family, Drew.

SIMON ASH—Trustee of the Crow Foundation, agent of Manuel Crow.

IRA BREITLING—Physical chemist and cofounder of the Fellowship.

RUTH BREITLING—Wife of Ira Breitling, member of the Fellowship since its foundation.

MANUEL CROW—Owner of one of the largest funeral parlor and cemetery companies in the country.

MR. FRY—Part of a CIA splinter group working behind the scenes to secure power.

SELMA (GRANDMA) JONES—Resident of Chicago who organizes her community.

FLOYD AND EVELYN REMPLE—Managers of the Sandman Motel, members of the Fellowship.

SALLY ROPER—Financial director of the Fellowship.

MARK SHEPHERD—Cofounder and leader of the Fellowship.

In the last days, God says, I will pour out my

Spirit on all people. Your sons and daughters

will prophesy, your young men will see 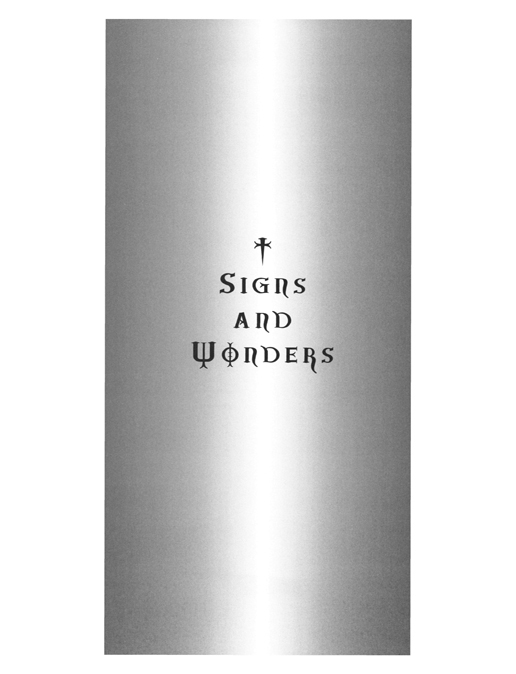 One day the angels came to present themselves before the Lord, and Satan also came with them. The Lord said to Satan, "Where have you come from?" Satan answered the Lord, "From roaming through the earth and going back and forth in it."

H
e set the candles in their usual places around the pentagram. That done, he carried the chicken down to the basement—a jet-black rooster, its head darting through the slats of its cage, bright black eyes looking around fearfully. He would sever that head tonight, watching the life fade from its eyes. There was still some joy in that, but sheer repetition had dulled his pleasure.

With ebony hair and eyes to match, a hooked nose and bony frame, Manuel Crow looked like a large featherless raven. Only his voice distinguished him from his avian namesake. Instead of a squawk, it was deep, rich, and melodious. Crow had the voice of a lounge singer but music had never interested him, nothing had, except death.

Growing up in his neighborhood, other boys played Little League or joined Boy Scouts, but not little Manny. He was a loner, shunning the ball games and bike trips to the swimming pool. Instead, he rode his Schwinn along the highways, looking for small animals run over in the night. Opossum were most common, but he also found raccoons, dogs, and cats. Only skunks escaped his attention—his mother would have none of those.

He used a burlap bag to carry his treasures home, the bag bouncing and swinging from his handlebars. Once home he retreated to his "lab," which he had set up in the old woodshed. He opened the animals first, slicing them from sternum to genitals, probing their squashed innards, understanding little of what he saw, but getting a sensual rush from the lifeless graying tissues. Next he skinned them. By puberty he was well practiced at separating the skin from the meat underneath, and like a professional taxidermist, he never cut or tore the fur. With the skin removed, Manny next scraped the muscles—the meat—from the bones. He found little pleasure in that—it was kitchen work. Cleaning the bones was easy compared to the skull, which had many nooks and crannies where the soft brain tissue and fibrous nerves hid. There were eye sockets to be cleaned, too. When he was younger he dug the brains out with a spoon, then used a nut pick to clean the hard-to-reach places. When he was older he used a water pick that he rescued from the trash. Working on his animals absorbed him in the same way putting model cars together did other boys. He spent hours picking out brain tissue, squirting clean the smallest orifices, until the skulls were free of every speck of tissue. Clean skulls were gray, so the final step was bleaching, accomplished by soaking the skulls in buckets of Purex. The finished product was as bright and clean as skulls baked under a desert sun. His best specimens were mounted on boards and by adulthood the walls of his lab were covered with animal skulls. If the skins were in good shape, they were tanned. Bones were stored in shoe boxes.

His parents told their friends their son wanted to be a veterinarian, but it was a face-saving fiction. On the one occasion they brought him an injured bird to heal, he dismembered it while it was still alive. In truth, his parents were afraid of him. They had reason to be.

His fascination with death eventually took him into the mortuary business. It began as an after-school job, his attention to detail and enthusiasm quickly coming to the notice of the owner. Always an energetic employee, he put in extra hours, hanging around, watching others work, and learning the business. The embalming was his favorite and even when he became owner of the mortuary, he kept some of that work for himself. Applying cosmetics to the corpses was difficult for him, since he saw no need to cover the gaping wounds or to putty the crushed skulls. Worst of all was faking compassion for the grieving relatives, but even this he mastered in time. It was a skill that would serve him well later in life.

The death business suited him, but left him with an emptiness—a longing for something more. By young adulthood he began to seek out that something. Sex and pornography bored him but it led him to the darker side of sensuality: sadomasochism. The leather and chains crowd excited him for a time, but when he discovered they too feared death, never willing to fully embrace it, he became disenchanted.

From SM he drifted into satanism, meeting those who worshiped the master of the realm of the dead. Strangely, he found the satanists were mostly women and they welcomed him, eager to teach him their rituals and invite him to their covens. A guest at first, he quickly became a member, then a leader, as he dared to take them to new levels. Before he joined, their worship involved only pentagrams, candles, and ritual. He introduced animal sacrifice.

Now the doorbell announced his guests, and he let them in: ten women and two men. Joking and laughing they made small talk, mostly about jobs and the weather. There was flirtation and contact in anticipation of the sexual free-for-all that would follow the black mass. Donning black hooded robes, they changed mood, solemn now. Crow set the tone, his black eyes and drawn face ready-made for solemn occasions.

The candles were lit, the coven called to worship. The black velvet covering was removed, exposing the statue of the Master. It was a devil, posed on one foot, the other leg held high as if frozen in mid-jump. Its hands reached up as if to catch something falling from the sky. Its head was tilted up,- its eyes were closed. Complete with hooved feet and horned head, it was the classic image of Satan—the Devil—the ruler of the underworld Crow's coven worshiped. He had purchased the ceramic statue at a gas station parking lot, painting it red to make it more "satanic."

Crow led the others in worship, calling on the Master to favor them, to empower them through demons. They pledged to do his bidding and cursed the one who had cast him from glory.

As he led the ceremony, his disgust grew. It was nothing but a game to the worshipers, a useless ritual conducted as an act of rebellion, not unlike the tattooing and body piercing the women practiced. It was trick-or-treat for adults, no more real than Sunday morning worship rituals practiced worldwide. No more effective, no less. He had been disenchanted for a long time, and made up his mind then and there that this was his last night as a satanist—time to move on, to continue his search to give his life meaning.

The chanting began, the worship continuing. Candles splattered shadows of the swaying worshipers across the walls and ceiling. Eerie to those who feared darkness, watching the shadows comforted Crow. He found the shadows seductive, arousing him like few women could. Dark places had always been special to him.

Crow swayed with the others, chanting the ancient words, believing none of them. Then it was time for the sacrifice. He picked up the knife from the center of the pentagram, raising it to the dark deity, pledging loyalty, asking the Lord of the Underworld to accept their humble sacrifice. Crow had sacrificed many chickens, but always thought it was a poor sacrifice. If he were a god, he would be insulted by the offering. That was one reason he knew no deity listened to the nonsense they chanted—no deity would tolerate such an insult.

As Crow released the catch, the chicken retreated into the cage, sensing its doom. Expertly, Crow snagged its neck tight in his fist. The coven's unified voice rose now in anticipation, Crow participating by rote. With the chicken in his right hand, and the knife in his left, he held them high in front of the statue. Then with a last loud supplication he severed the head in one quick stroke. The body flopped to the ground, then was up and running, blood spurting from the stump of its neck—this was the fun part. Then the unexpected happened.

"My time is soon!" a deep voice boomed.

Suddenly silent, the worshipers looked at each other, shaken by the unexpected voice. They turned to Crow, suspecting fakery. He shook his head, denying their silent accusations. The basement room was silent now. Shocked into a few seconds of silence, they began to speak, to explain away what they had clearly heard. Then one of the women pointed in horror. Crow turned to see the devil statue moving. The raised arms came down, the raised leg lowered until the cloven hooves both rested on the pedestal. Crow felt the others back away, leaving him to face the little horror. Then the head turned slowly until it faced Crow. There was a pause—a long moment of terror. Then the eyes popped open, glowing red as if lit by the fires of hell.

The others ran, but not Crow. There was no fear in him, only joy. It was true—there was an underworld ruled by a deity of death and it had spoken to him. Now falling to his knees, he worshiped the idol, not from ritual, but from conviction.

The Guinea Pig Diaries by A. J. Jacobs
The Machine by Joe Posnanski
A Guide to the Good Life : The Ancient Art of Stoic Joy: The Ancient Art of Stoic Joy by William B. Irvine
The Night Has Teeth by Kat Kruger
Lock by Hill, Kate
Healing (General's Daughter Book 5) by Breanna Hayse
Chase Part 4: A New Adult and College Billionaire Romance (Chase Me Billionaire Romance Series) by Grey, Chloe
Alma by William Bell
The Awakening by Angella Graff
The Soul Continuum by Simon West-Bulford
Our partner