Read Judy Mood And The NOT Bummer Summer Online

Judy Mood And The NOT Bummer Summer 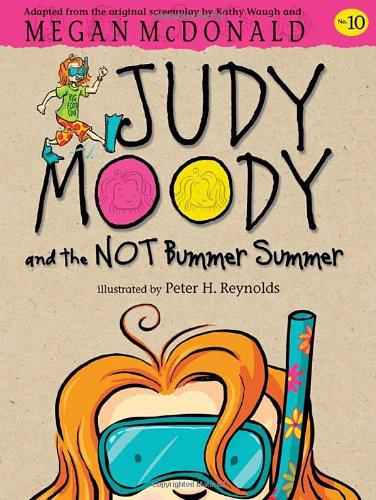 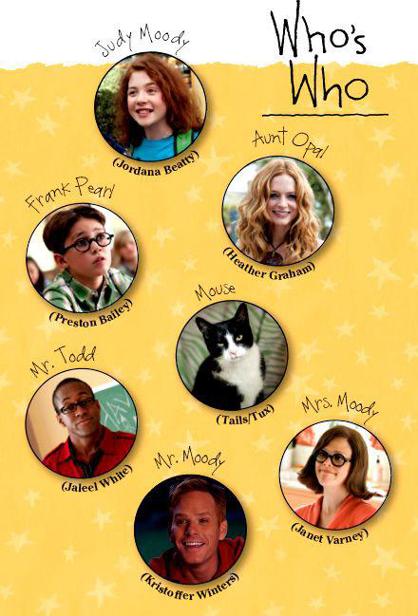 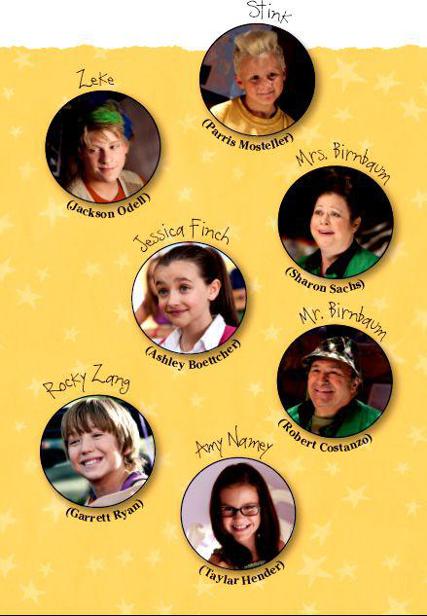 The countdown: only 27 minutes, 17 seconds, and 9 milliseconds until… SUMMER!

No more
S
Snoresville
summers. She, Judy Moody, was going to have the best summer ever. RARE!

Judy passed a note to Rocky before Mr. Todd came back.

To: Rocky, Frank, and Amy Namey

Be there or be a SquarePants

Rocky flicked the note to Frank. Mr. Todd came into the room carrying a stack of papers. He had his
GOT
MUSIC
cap on — backwards! He blinked the lights to get everyone’s attention. Frank popped the note into his mouth.

“Just think: it’s your
last
test on the
last
day of school.”

“Aw! Nah-uh! Bad one!” everybody moaned.

“No way,” said Frank. The note shot out of his mouth and landed smack-dab in the middle of Rocky’s desk. Slobber City!

Mr. Todd passed out the quizzes. Mr. Todd cleared his throat. “Question number one: How many times did I wear a purple tie to school this year?”

“Number two: How long did it take our class to go around the world?”

“Eight
and a half
days,” said Judy.

“Too easy. Let’s skip ahead. Here’s one. This is big. Really big. We’re talking
MUCHO
GRANDE!”

“Tell us!” everybody shouted.

“Can anyone — that means
YOU
, Class 3T — guess what I, your teacher, Mr. Todd, will be doing
THIS
SUMMER?”

“Working at the Pickle Barrel Deli?” asked Hunter. “I saw you there.”

“That was last summer,” said Mr. Todd. “But this summer, if you find me, you win a prize.”

Judy thought and thought. Her eyes landed on the Antarctica poster tacked to the bulletin board.

“Unless we see you this summer!” some of the kids yelled.

“Last one in the tent is a rotten tomato!” Judy, Rocky, and Amy pushed past Frank into the T.P. Club tent in Judy’s backyard.

Judy pulled out a giant, rolled-up poster board. “Okay, T.P.-ers! We are going to have the most way-rare, double-cool,
NOT
bummer summer ever.”

Judy, Frank, and Rocky stared at one another.

“Why do we need a toad?” asked Amy. Everybody cracked up.

“What about Toady?” Frank asked.

Of course! Judy was back in a flash from Stink’s room, holding Toady, the club mascot, in her hand. She passed it lightning-fast to Amy.

Amy peered at the toad in her hand. “I don’t get it. What’s supposed to happen? If he jumps in my face, you guys are so dead.”

“Do you feel anything?” asked Frank.

“Yeah. A big, fat, slimy —” All of a sudden, Amy made a face as something started to drip from her hands.

“EEUWW!” she said, peering at the teeny puddle of yellow. She gave Toady back to Judy.

“Now you’re a member of our club,” said Frank. “The
TOAD
PEE
club.”

Judy popped the rubber band off of her chart. “So, are you guys ready for my uber-awesome plan? Intro-DUCE-ing… the one and only… Judy Moody Mega-Rare NOT-Bummer-Summer Dare.” Judy unrolled her chart. “Ta-da!” Stickers and glitter went flying. “See? Thrill Points, Dare Points, Bonus Points, Loser points, and Big Fat Total.”

“You know how summer’s always Boring-with-a-capital-
B
? Thrill points are going to save summer. I spent two days and sixteen erasers figuring it out.”

“Ride the Scream Monster? Surf a wave? Are these the dares?” Amy asked.

“Yep. See, a dare is something
way
fun that we’ve never done before and that we’re kind of scared to do. Cool beans, huh?”

Judy stuck her hand over his mouth. “As I was saying… for each dare, we get ten thrill points. Plus bonus points if we do something crazy, like ride the Scream Monster with no hands. OR loser points if we chicken out.”

“Ooh! And at the end of summer, we add up all the points?” Frank asked.

“Yeah. If we reach one hundred, then, presto-whammo, we just had the best summer ever. Is that thrill-a-delic, or what?”

Rocky looked green around the edges. Amy looked like she had just swallowed a frog. “Rocky forgot to tell you… he’s going away this summer. To circus camp.”

Judy cracked up. “You guys! You got me. I thought you were serious. Borneo. That’s a good one. What even IS Borneo?”

“It’s an island. In Indonesia. And I am going, for real, with my mom. We leave next Friday.”

“Same here,” said Rocky. “I’m going to learn to walk a tightrope and do magic tricks and stuff.”

“That is SO not fair! How am I gonna have the best summer
EVER
if you’re not even
here
?”

Frank looked up from the chart. “Hel-lo! I’m not going anywhere.
We
can still have fun.”

After her friends went home, Judy sat in the tent staring at her blank chart. Suddenly, it did not look one bit thrill-a-delic. It looked
funk
-a-delic. FLUNK-a-delic. “It’s just you and me now, Toady. Another long, hot, boring summer.”

“Chill out, Stinkerbell. He’s right here. We needed him so Amy could be in the Toad Pee Club.”

“Hey, no fair! You guys had a Toad Pee Club meeting without me?”

“Be glad you weren’t here. It was the worst Toad Pee Club of all time.”

“Somebody’s in a mood,” said Stink.

“You would be too if your best friends were going to circus camp and Borneo for the summer. Now I’m stuck here being Bored-e-o.”

“Not me! I have big plans for summer. Big
foot
plans. I’m going to catch Bigfoot!”

“Stink, the only big foot around here is your two big stinky feet!”

“Haven’t you heard? It’s all over the news. There are Bigfoot sightings everywhere. He’s way close. Yesterday, Riley Rottenberger told Webster and Webster told Sophie and Sophie told me that Riley saw Bigfoot
at the mall
!”

“Yeah, right. And you, Stink Moody, are going to catch him.”

This was going to be the boringest, snoringest summer ever. For sure and absolute positive.

A week later, even though Judy had promised herself she was never ever going to talk to Rocky again, she walked across the street with her bike to say good-bye. Rocky’s mom and dad, aunts, uncles, and tons of cousins were giving him a send-off party with a big good-bye cake and lots of singing “For He’s a Jolly Good Fellow.”

Judy helped Rocky lug a big suitcase to the backseat of the car. Rocky gave it one final push with his butt.

“So you’re not
NOT
gonna go to circus camp, huh? Sure you don’t want to change your mind?”

“But what if you hate circus camp?” Judy asked.

“Elephant-poop scooping all day? Elephant poop weighs like two hundred tons. Plus, it smells worse than a corpse flower.”

Judy stepped back. Her smile started to quiver. “Bye.”

She trotted alongside the car. “Remember, if camp is super-boring, you can always come home!”

Judy hopped on her bike and raced after the car. “Don’t say I didn’t warn you about the poooooop!”

Rocky waved from the backseat until the car disappeared.

Judy biked straight to Amy Namey’s house. When she got upstairs, Amy was jamming the last Nancy Drew book into her zebra-striped backpack. Judy flopped on Amy’s bed, blowing a huge bubblegum bubble.

“So tell me again why you’re going to Bored-e-o?”

“Born-e-o. My mom’s going to write an article on this lost tribe called the Penan. They’ve lived in the rain forest since forever, but all their land is getting wrecked because loggers are cutting down all the trees.”

“That sounds so way un-boring. I wish I could help save a lost tribe.”

“Go ask your mom. Maybe she’ll let you come, too!”

“I will! See ya,” Judy called, zooming out the door. Two seconds later, she popped back into Amy’s room. “But in case she says no, here’s something to remember me by.” Judy dug around in her pocket and came up with a red rubber band, a lucky stone, and half a Grouchy pencil.

“Here,” she said, handing over the pencil. “Write me.”

Judy pedaled home as fast as she could, singing, “Oh, Borneo, I long-e-o to visit you-e-o…” She jumped off her bike, letting it crash to the ground.

“Mom!” she called, bursting through the door. “I have a great idea! Mommmmm! Guess what? I figured out how to save summer.”

“Save summer?” Mom said, distracted. “I didn’t know it was in trouble.”