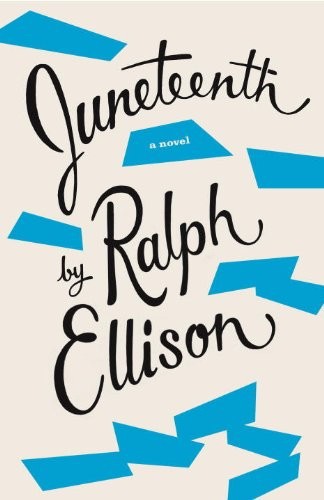 “
Juneteenth
is written with unmistakable Ellisonian zest, depth, and elegance.… The work holds together as a complete, aesthetically satisfying, and at times thrilling whole.”

“Ralph Ellison’s generosity, humor and nimble language are, of course, on display in
Juneteenth
, but it is his vigorous intellect that rules the novel. A majestic narrative concept.”

“A stunning achievement.…
Juneteenth
is a tour de force of untutored eloquence. Ellison sought no less than to create a Book of Blackness, a literary composition of the tradition at its most sublime and fundamental.”

“Ellison’s writerly skills are awesome. He enables us to relive the astonishment of the first generation to experience the movies and reanimates the commonplace pleasures of a type of boyhood that may never come again. He recaptures the heated fervor of the revival tent so vividly that you feel yourself begin to sweat.”

“Impressionistic, jazzy, and Faulknerian, assembled from stories inside of stories, dreams, flights of memory, and bolts of rhetoric.”

“For anyone who cares about American literature and the seemingly insolvable pain of race,
Juneteenth
is a must-read.”

“
Juneteenth
contains the most resonant and alluring uses of the American idiom I’ve read in a while.… It rolls and riffs. Get down to the bookstore and open it and read, brothers and sisters, read.”

“Ellison wrote better sentences than just about anybody.…
Juneteenth
is good the first time, better the second. His meanings slip and slide, they are associative, like American culture, where nothing is ever quite what it seems, nor stays that way for long, and where absolutely nothing is purely black and white.”

“
Juneteenth
is a cause for celebration.”

“More than anything, Ellison was a passionate writer, and passion is unquestionably present in
Juneteenth.
”

“Ellison may be the greatest of jazz sermonizers and homiletic blues guitarists ever to write fiction.”

“A riotous revel in what H. L. Mencken called The American Language, which Ralph Ellison has taken to his beloved Territory and back again.”

“A uniquely American drama of independence and codependency set in a world of conspicuous racial fractures and invisible solidarities.”

“A work so long in process that it assumed legendary status decades ago, the successor to Ralph Ellison’s
Invisible Man
appears at last.… It is a work of rare and doubtless unique intelligence, purpose, and power—a generous legacy bequeathed to us, persuasive testimony to the genius of Ralph Ellison.”

“
Juneteenth
may be one of the most important books of the year, if not the decade.… An eloquent, intelligent, and worthwhile statement on race relations in the country during the twentieth century.”

“Ellison stands as one of the exemplary writers of the century.… This painstakingly assembled edition keeps his genius visible.”

“On display throughout the novel are Ellison’s wit, his marvelous ear for language, and his sublime intellectual approach to the visceral issues eating at America’s heart.”

“The fun of reading this book—and there is some fun on every page—comes from Ellison’s familiarity with African-American folklore and literature.”

“Ellison’s signature preoccupations with language and the racial markings of American Identity stream through a beautifully written tale.”

“Ellison, both as a prose writer and literary thinker, was and is an American master.”

“Ellison’s long-delayed second novel is a fitting testament to his talent.”

“Thanks to the astute and dedicated editing of John Callahan, we have a book that can fairly be called Ralph Ellison’s second masterpiece.
Juneteenth
is, quite simply, a great American novel.”

Ralph Ellison was born in Oklahoma City in 1914. He is the author of the novel
Invisible Man
(1952), winner of the National Book Award and one of the most important and influential American novels of the twentieth century, as well as numerous essays and short stories. He died in New York City in 1994.

John F. Callahan is Morgan S. Odell Professor of Humanities at Lewis and Clark College in Portland, Oregon. He is the editor of the Modern Library edition of
The Collected Essays of Ralph Ellison
and is literary executor of Ralph Ellison’s estate.

Charles Johnson, the S. Wilson and Grace M. Pollock Endowed Professor of Writing at the University of Washington, received the 1990 National Book Award for his novel
Middle Passage
.

Published in the United States by Vintage Books, a division of Random House, Inc., New York, and simultaneously in Canada by Random House of Canada Limited, Toronto.

Originally published in slightly different form in hardcover in the United States by Random House, Inc., New York, in 1999.

Portions of
Juneteenth
were previously published in different form in
The New Yorker, The
Noble Savage
, and
The Quarterly Review of Literature
.

To That Vanished Tribe into Which I Was Born:
The American Negroes

This is the use of memory:

For liberation—not less of love but expanding
Of love beyond desire, and so liberation
From the future as well as the past. Thus, love of a country
Begins as attachment to our own field of action
And comes to find that action of little importance
Though never indifferent. History may be servitude,
History may be freedom. See, now they vanish,
The faces and places, with the self which, as it could, loved them,
To become renewed, transfigured, in another pattern.

Afterword: A Note to Scholars

Despite his death on April 16, 1994, we are by no means finished with Ralph Ellison’s literary legacy, especially after the publication of his many-splendored second novel,
Juneteenth
, which guarantees that we will be discussing Ellison’s contribution to American letters well into the next millennium.

And as an increasingly multi-racial society, we are indebted, of course, to John Callahan for conjuring this portion of Ellison’s magnum opus from over two thousand pages revised and rewritten over a period of forty-two years. Everywhere in
Juneteenth
Ellison’s decades-long distillation of craftsmanship and originality of thought are evident. His dedication for this ambitious work (“To That Vanished Tribe into Which I Was Born: The American Negroes”) signals his project of honoring and exploring the lives of black Americans who, from the nation’s founding to the 1950s, and despite the burden of racial oppression, embodied our Republic’s loftiest ideals.

In
Juneteenth
that Vanished Tribe is represented by the Reverend Alonzo Hickman, a former black jazz musician turned revivalist preacher, who raises a white boy named Bliss in the hope that he will recognize the complexity of the American experience and “speak for our condition from inside the only acceptable mask. That he would embody our spirit in the council of our enemies.” But Bliss turns his back on the black culture that nurtured him, transforming first into a filmmaker, then into a race-baiting senator named Adam Sunraider (“the most vehement enemy of their people in either house of Congress”) who is shot by a black assassin on the Senate floor.