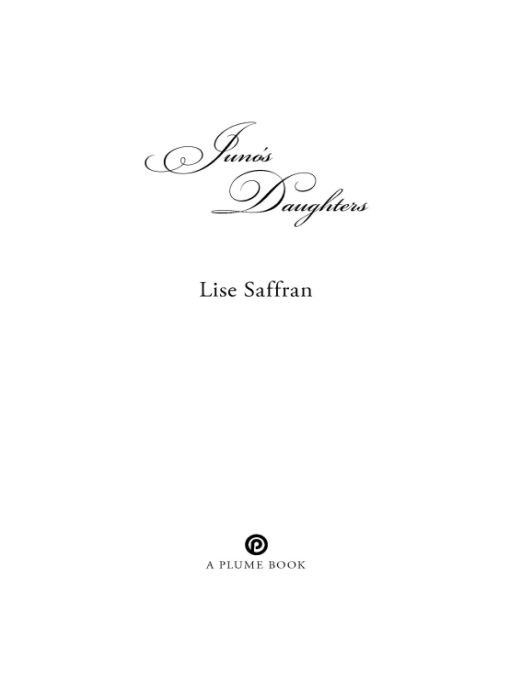 LISE SAFFRAN is a graduate of the Iowa Writers' Workshop, where she was an Iowa Arts Fellow. Her short fiction has appeared in a variety of literary magazines and in the anthology
Family Wanted
. She lives in Columbia, Missouri, with her husband and two sons. This is her first novel. 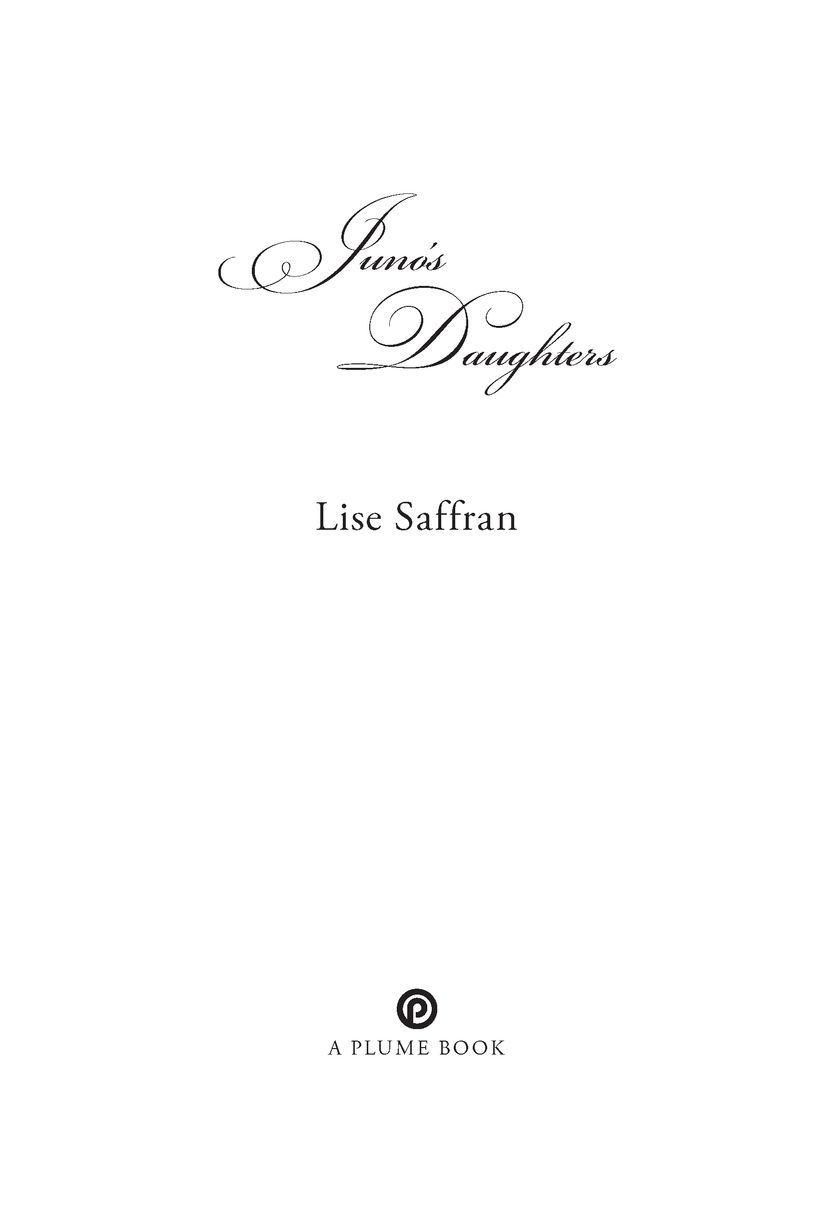 REGISTERED TRADEMARKâMARCA REGISTRADA LIBRARY OF CONGRESS CATALOGING-IN-PUBLICATION DATA
Â
Saffran, Lise.
Juno's daughters / Lise Saffran.
p. cm.
eISBN : 978-1-101-48624-5
PS3619.A355J86 2010
813'.6âdc22 2010015044
Â
Kirch
Â
Without limiting the rights under copyright reserved above, no part of this publication may be reproduced, stored in or introduced into a retrieval system, or transmitted, in any form, or by any means (electronic, mechanical, photocopying, recording, or otherwise), without the prior written permission of both the copyright owner and the above publisher of this book.
Â
PUBLISHER'S NOTE
This is a work of fiction. Names, characters, places, and incidents are either the product of the author's imagination or are used fictitiously, and any resemblance to actual persons, living or dead, business establishments, events, or locales is entirely coincidental.
Â
The scanning, uploading, and distribution of this book via the Internet or via any other means without the permission of the publisher is illegal and punishable by law. Please purchase only authorized electronic editions, and do not participate in or encourage electronic piracy of copyrighted materials. Your support of the author's rights is appreciated.
Â
BOOKS ARE AVAILABLE AT QUANTITY DISCOUNTS WHEN USED TO PROMOTE PRODUCTS OR SERVICES. FOR INFORMATION PLEASE WRITE TO PREMIUM MARKETING DIVISION, PENGUIN GROUP (USA) INC., 375 HUDSON STREET, NEW YORK, NEW YORK 10014

For Robert, Clay, and Jonah. Always.
ACKNOWLEDGMENTS
I
would like to express my gratitude for the several writing communities to which I have been privileged to belong, including the Iowa Writers' Workshop, the MacDowell Colony, and Hedgebrook. My parents and brother comprise an unparalleled cheering section in all matters, and my husband, Robert, is as thoughtful, insightful, and enthusiastic a partner as anyone could wish for. The collection of guitar strummers, banjo pickers, and washtub bass players that I call my extended family is also deserving of appreciation.
Juno's Daughters
owes a significant debt of inspiration to Island Stage Left, which graced us with a virtually private performance of
The Tempest
one magical summer. They bring excellent theater to the San Juan Islands for free, but any further similarities with the company in the novel are purely coincidental and unintended. I would like to thank Shannon Kelley for her generous and detailed e-mails about life on the islands. The
San Juan Islander
served as a further resource and in particular Susan Vernon's
San Juan Nature Notebook
. Miko Lee and Andrea Maio provided crucial backstage details; Kevin Perry shared his knowledge of Seattle street kids; and Amy Stambaugh deserves credit for Rascal. Meg Klein-Trull and her girls helped me understand challenges specific to the lives of beautiful teenagers, and Jo Luloff, Melanie Fallon, Kate McIntyre, and Julie Christenson all read and commented on early portions of the novel.
Finally, thanks aplenty to my perfectly brilliant editor at Plume, Denise Roy, and to my agent, Nathaniel Jacks, for his good sense, dedication, and friendship.
CHAPTER 1
Here in This Island We Arriv'd
T
here was one day in early June of each year when theater-loving residents of San Juan Island, Washington, listened more eagerly than usual for the echoing horn of the ferry in Friday Harbor. It was the day the Equity actors, professionals from New York and Los Angeles and Ashland, Oregon, arrived on the island to take their roles in the annual Shakespeare production. They came in their city clothes, or in brand new fleece and Gore-Tex, and fanned out to the spare rooms and converted garages and guest cabins happily offered up by islanders.
To the tourists who poured in from Seattle and Portland and San Francisco, it was a day like any other, an opportunity for bike riding on Lopez or whale watching in Haro Strait or strolling through the Westcott Bay Sculpture Park & Nature Reserve. Islanders who, like Jenny, helped with the sets or took the smaller parts, looked forward to this day the way they watched for the blooming of the red columbine. It meant that summer had finally come.
Dale and Peg, the founders of Props to You, had come to San Juan Island from the Oregon Shakespeare Festival in Ashland fifteen years before. They had arrived like so many of their neighbors: burnt out from the city or unhappy in their jobs or marriages or looking for a safer, more uncomplicated place to raise children. Back then you didn't have to be a Microsoft millionaire to buy a plot of land on San Juan or Lopez or Shaw. The ratio of old hippies, glassblowers, and lavender farmers to heiresses and rock stars was still higher than visitors to the islands could believe when they looked out their hotel windows at the views of Mount Baker.
The pair of actors had arrived with all their worldly goods in a VW camper van and bought five acres of land on Egg Lake Road. At the time it was just a pasture and a barn. They lived in their van for two years until they could finish their cabin and then immediately thereafter had framed a stage out of two-byfours covered in plywood. They had begun casting their first production before the plywood was even painted.
A Midsummer Night's Dream
. People who had been around a while still talked about how the guy that Dale had convinced to come up for the summer and play Puck went for a psilocybin-induced walkabout on Turtleback Mountain and had to be rescued by the Washington Wing Civil Air Patrol. They talked a little less about what went on between him and Peg that summer, though they all knew. Everyone liked Peg.
It was in February of each year that Dale and Peg revealed the play they'd chosen for the coming summer. In no time, copies would be passed around from bed-and-breakfast owners to groundskeepers to whale watching captains to real estate agents. By May it would not be at all surprising to hear the owner of an art gallery and a souvenir shop clerk on a bench overlooking Friday Harbor speculating on how mistaken identities complicated the plans of young lovers or laughing about the machinations of this or that clever servant.
This year it was
The Tempest
, and by arrival day everyone on the island knew that Miranda had played a girl with multiple personality disorder on
Law & Order SVU
and that Trinculo and Caliban were regulars at New York City's Roundabout Theatre. Ariel was coming from Seattle, where he had recently starred in a production of
Peter Pan
. Prospero? Well, of course Prospero would be played by Dale himself.
His waist had thickened over the years and his beard, once streaked with gray, was now entirely white. It was easy to picture Dale in a long robe promising
calm seas
and
auspicious gales
. Speculation had been rife for weeks about who from the island would be selected to fill the minor roles. There was the question of the O's (Alonso, Gonzalo, and Stephano). There were the three spirits, Ceres, Iris, and Juno. There was the Boatswain.

The Syndicate (Timewaves Book 1) by Davis, Sophie
The Tenth Parallel: Dispatches From the Fault Line Between Christianity and Islam by Eliza Griswold
Chrysoprase (The Chalcedony Chronicles) by B. Kristin McMichael
The Dog Days of Charlotte Hayes by Marlane Kennedy
Full Moon Rising - 02 by Heath Stallcup
Baby Teeth: Bite-sized tales of terror by Rabarts, Dan
Quartered Safe Out Here by Fraser, George MacDonald
A Series of Unfortunate Events: The Hostile Hospital by Lemony Snicket
The Lighter Side of Large by Becky Siame
Cursed Kiss (Paranormal Romance) by Taylor, Helen Scott
Our partner