Read Just Count on Me: Counting on Love Prequel Online

Just Count on Me: Counting on Love Prequel 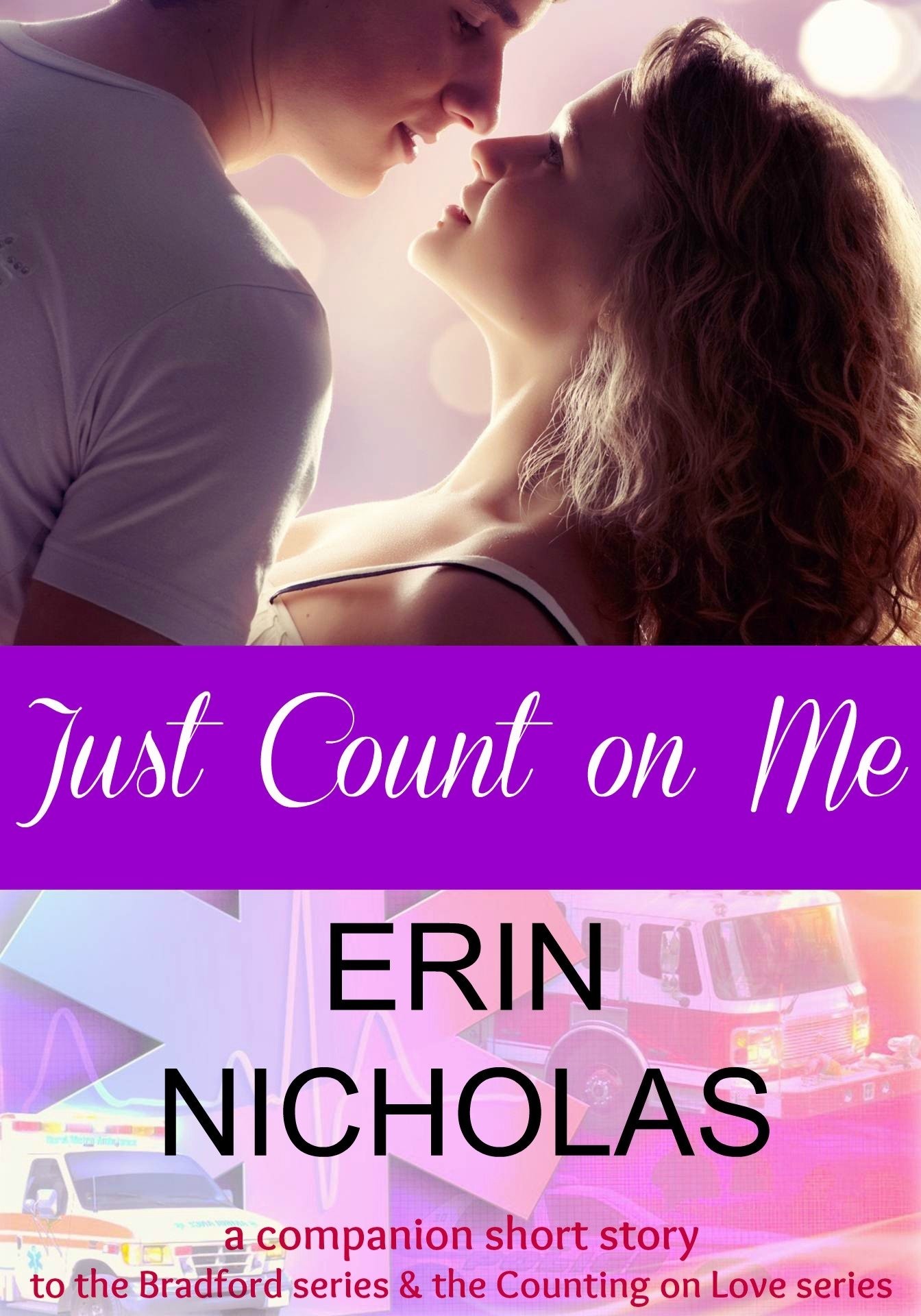 Just Count on Me

WARNING
: This is a
short
story with LOTS of people introduced.

In it you will meet characters from two different five book series.

I hope it’s fun and entertaining, I hope it piques your interest in one or both of the series, I hope you enjoy it. But if you haven’t read either series and feel a little lost…yeah, that makes sense.

And if you feel like the story is very short…well, you’re right.

I wrote the Bradford series
(Just Right, Just Like That, Just My Type, Just For Fun and Just A Kiss)
in 2010 and 2012. I was thrilled when readers fell as in love with these characters and stories as I had! So, when it came time to say goodbye to that group, I balked. And came up with an idea for a spin-off series.

The new group, now known as the Dixons, appear in my Counting On Love series
(She’s the One, It Takes Two, Best of Three, Going for Four and Up by Five)
. They know and interact with the Bradford gang and some of the characters from the Bradfords show up in the Counting on Love books. It’s been so fun to revisit old friends while making new ones and readers have told me over and over how much they’ve enjoyed the ties between the two series.

As I was writing
She’s the One
, I thought that it might be fun (and maybe even helpful) to explain how the two series connect. And the seed for Just Count on Me, a short story bridging the two series, was planted.

It grew quickly and I originally debuted the short bridge story on my blog in five parts leading up to the release of
She’s the One
. It was fun for fans of the Bradford series to see their beloved characters again as they first met the new guys (and girls).

Now I’ve added some bonus material and decided to make the story available to everyone.

As I said above, it’s a
short
story. It doesn’t have a distinct conclusion. There are a lot of people introduced in not-many pages and it could be easy to get lost. And did I mention, it’s short?

With all of that said, enjoy!

“You’ve got to be fucking kidding me.”

Mac Gordon came up short in the break room at St. Anthony’s hospital. He and the rest of his EMT crew were just coming on shift. And right in the middle of the sofa in the break room was a gigantic stuffed dog with a big pink bow tied around its neck.

Sam Bradford chuckled and slapped him on the shoulder. “You say that at least twice a week.”

Kevin Campbell crossed to the dog and read the big heart shaped tag. “I’m happy to follow you around like a puppy. Happy Birthday. Love, Conner.”

Mac stomped forward, “Oh, he did
not
sign it love.”

Kevin laughed and stepped back out of the way. “No. He didn’t sign it at all, actually.”

Mac reread the card. “This is over the top.”

Dooley Miller was grinning like a dumbass. “You had to be expecting it. There’s no way Conner would let Sara’s birthday go by without doing something stupid.”

Mac stared into the dog’s eyes. Dooley was right. He had been expecting Conner Dixon to do something to commemorate Mac’s wife’s birthday. Conner claimed he was madly in love with Sara and would never find another woman to compare. Mac knew that seventy-five percent of that was simply a convenient way for Conner to fuck with Mac’s head. But there was that other twenty-five percent that he knew was true. Conner had met Sara without knowing she was married to Mac and had immediately hit on her. But, even after finding out she belonged to Mac, he kept up his flirtation. “People break up every day” was his favorite saying when Mac was around.

And there were his jabs about how much older Mac was. And how Conner was exactly the right age for her. And his crazy statistic that seventy percent of married women cheat. And his endless supply of compliments and come-ons that had made Sara blush more than once.

Still, Mac hadn’t killed Conner yet. Hadn’t even hurt him. Because the kid was actually pretty cool.

He was a phenomenal paramedic, for one. On calls, Mac knew that Conner would make the right decision, would make it quickly, and would give a one-hundred-and-ten percent effort every time. That got him a lot of forgiveness.

Then there was his off-duty side. He was funny, he could take as much shit as he gave, and he was a good friend and leader to his crew. He was also the big brother to four dynamic younger sisters. The Dixon Divas were something. They were gorgeous, out-going, bright and flirtatious. Mac had to admit that he felt a little sorry for Conner. At least some of the time. Conner was protective of his sisters and he was always there for them, no matter what trouble they got into. Mac admired his ability to keep his cool and do the right thing even while clearly wanting to lock them all in a convent permanently.

“He shouldn’t have delivered the damn thing here,” Mac said, still staring at the dog. Sara was going to love it. Sure, she’d end up giving it to Elijah, their three-year-old son. Still, she would think Conner was sweet for getting her something for her birthday.

“He had to deliver it here. That’s the only way to be sure
we
saw it and could give you crap about it,” Dooley said, plopping onto the couch next to the dog that was bigger than he was, and looping his arm around its neck.

“Look at it this way,” Kevin said to Mac. “He’s got great taste in women and he idolizes you as the man who got Sara Bradford to fall for him.”

Mac had heard that argument before. It was a good point. It still didn’t mean that the guy should be giving gifts to another man’s wife.

“Maybe I’ll give Conner some ideas about where he should shove this dog,” Mac grumbled.

“Hey, I wonder where those guys are,” Sam commented, twisting the cap off a bottle of water. “It’s really quiet in here and I’d expect to see Conner’s smug face by now.”

Mac headed for the front of the ER to get the news about Conner’s crew from the front desk staff. When the rigs went out on calls, the girls up front kept track, knowing that the ambulances would often be returning with patients for the ER staff.

“Hi, Mac.” Lisa gave him a smile. “Just heading back. Code blue at one of the nursing homes.”

“If you see him before I do, tell him I want to talk to him.”

She grinned. “He told me that you might leave that message.”

Mac shook his head. This kid was something.

“Yeah. He carried it through the main doors so
everyone
would see it.”

“Okay, be honest—is it sweet? Sara will like it?” He already knew the answer. Sara would be flattered by Conner’s attention but would take it as nothing more than a compliment. Mac wasn’t worried. But he had a theory going and he wanted to test it with Lisa.

“Of course it’s sweet,” Lisa said. “Any woman would love to have a guy try so hard to win her over.”

“Even if she’s already with another guy?”

“Even better,” Lisa assured him. “Having two great guys crazy about you is a fantastic fantasy.”

Uh, huh. So far his theory was working out.

Lisa laughed. “There’s nothing wrong with him. Conner’s got it all. He’s hot, sexy, heroic, funny—and obviously romantic.”

Yep. That was part of the theory. Conner was showing his charming, romantic side to
all
the women by being supposedly ga-ga over Sara. Sara—a woman who wouldn’t expect any kind of actual commitment or a promise or a diamond ring. He was winning all the women over and not making one single can’t-get-out-of-it-later promise. He was essentially seducing them all without any expectations of next day phone calls.

It was kind of brilliant.

“Do all the women hate Sara?” he asked. The women in his life—his friends’ wives and sisters—weren’t the jealous types but he worked around enough women in the hospital to know all about female envy.

“No,” Lisa assured him. “Everyone loves Sara. Because she’s never going to actually
have
Conner.”

“But I will say, he’s set the bar high. Sara’s also got it all. The next girl he actually asks out should feel pretty good about herself.”

Mac groaned inwardly.
And
Conner was setting it up so all the women he did finally pay attention to would be totally flattered.

“Plus, watching a guy flirt with another girl calls attention to him—and how cute and sexy he is. It makes you automatically judge whether or not you would say yes to him.”

“How does Dixon do most of the time?”

Lisa gave him an I-know-you-already-know-the-answer-to-this look. “He could have any single woman in this hospital.”

Exactly as Mac suspected. Conner was setting himself up to be able to just snap his fingers and have woman all over him.

“I want to see him the
minute
he gets back.”

No one said anything. They were all looking at Sam. Sam looked like he was about to be sick.

Mac was instantly concerned. “What the fuck, Bradford?”

Mac felt his gut clench before Sam said the words.

Everyone stopped breathing for just a moment. They knew that address. Very well. It was the address for the Bradford Youth Center.

The crew all reacted at once. Without another word, they ran for the rig, going through their checklists by habit and tearing out into the night, siren wailing within minutes.

The Bradford Youth Center was the non-profit center that kept kids off the streets and gave them a place to go when things got shitty at home—as they often did for the kids in that part of the city. Sam and Sara’s dad, David Bradford, had founded the center and it was still run under the supervision of the Bradford siblings and supported by David’s trust, private donations and lots of volunteer hours. Many of those hours were put in by the Bradfords and their friends and spouses.

Sara was the acting Administrator.

“Who’s there right now?” Dooley asked as they all sent their wives text messages.

“Sara’s there,” Mac said, feeling cold seep through his body as he let the reality in.

“Jess was supposed to go over tonight too,” Sam said, his voice tight. “Dani’s at home with the twins.”

Their crew worked the seven p.m. to seven a.m. shift so it was about bath and bedtime at Sam’s house.

“Morgan and Eve?” Mac asked about Dooley and Kevin’s wives. The girls were all friends. It wasn’t uncommon for one or more of them to show up at the Center to help with something or just to hang out.

“Morgan’s at the Bed & Breakfast,” Dooley said. “She had a couple checking in tonight around eight.”

Where It Hurts by Reed Farrel Coleman
Too Quiet in Brooklyn by Anderson, Susan Russo
Kolchak: The Night Stalker: A Black and Evil Truth by Rice, Jeff
HannasHaven by Lorna Jean Roberts
Unremarried Widow by Artis Henderson
His Brand of Passion by Kate Hewitt
My Heart's in the Highlands by Angeline Fortin
Vendetta: Lucky's Revenge by Jackie Collins
The Hitwoman Gets Lucky (Confessions of a Slightly Neurotic Hitwoman) by Lynn, JB
Run the Day by Davis, Matthew C.
Our partner