Read Just for You Online 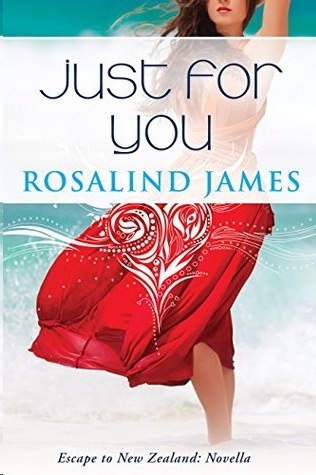 The Blues and the All Blacks are actual rugby teams. However, this is a work of fiction. Names, characters, places, and incidents are products of the author’s imagination or are used fictitiously and are not to be construed as real. Any resemblance to actual events or persons, living or dead, is entirely coincidental.

Blast From the Past

A Bit of Holiday Fun

Just This Once (Escape to New Zealand, Book One): Prologue

Reka and Hemi’s story:
Just for You
(Novella)

Hannah and Drew's story:
Just This Once

Ally and Nate's/Kristen and Liam's stories:
Just My Luck

Josie and Hugh's story:
Just Not Mine

Desiree and Alec's story:
Nothing Personal

Note:
A New Zealand glossary appears at the end of this book.

No shirt, no shoes, no…problems?

Hemi Ranapia isn’t looking for love. Fun, yes. Love, not so much. But a summer fishing holiday to laid-back Russell could turn out to be more adventure than this good-time boy ever bargained for
.

Reka Harata hasn’t forgotten the disastrously hot rugby star she met a year ago, no matter how much she wishes she could. Too bad Hemi keeps refusing to be left in her past
.

Sometimes, especially in New Zealand’s Maori Northland, it really does take a village. And sometimes it just takes a little faith
.

From the Author:
This 36,000-word (120-page) novella begins about six years before the events of JUST THIS ONCE. It was designed to be read as a stand-alone book and an intro to the series—but if you’ve read the others and are curious, here’s a handy-dandy little guide to familiar characters you’ll wave “hi” to in this story:

Drew Callahan (Blues): 24, like Hemi; just made captain of the Blues.

(And yes, they do start playing that young! It’s a young man’s sport.)

T
he baby was crying, but that wasn’t why he was watching.

Hemi Ranapia leant against the rail on the upper deck of the car ferry that had left Opua a few minutes earlier and would be in Okiato in a few more. He wasn’t looking at the placid waters of the Bay of Islands with his mates, though, or paying attention to their desultory conversation about the fishing trip they had planned for the next day. He was watching the girl.

She hadn’t noticed him yet. She was walking on the opposite side of the ferry’s top deck, holding the crying baby, talking or singing to it, he couldn’t tell. She was moving in his direction, every step a swaying bounce to calm the fussing infant, and one part of him wanted to go below, but the other part kept him rooted, waiting for her to recognize him.

She bounced the baby a bit more, but absently now. Aaron and Nikau stopped chatting about fishing and looked at her, and, baby or not, Hemi knew why they were looking, because she looked like a flower, something tropical and lush. She was wearing a flouncy pale-green skirt and a pretty orange top that clung to her rich figure, and her hair, pulled back into its Maori knot, was every bit as dark and shining, her skin every bit as velvety brown, her curves every bit as luscious as they’d looked in the red bridesmaid’s dress she’d been wearing the last time he’d seen her. The dress she’d been wearing for a while, anyway.

“Hemi,” she said, and it wasn’t an invitation.

“You have a baby,” he said, and if there was a stupider opening line, he didn’t know what it would be. Now that she was closer, he could see that it was a Maori baby, but that was about it. Which left the question exactly as open as it had been before.

Bedding The Wrong Brother (Dalton Brothers Novels) by DePaul, Virna
The Art of Wag by Susan C. Daffron
Time Traders by Andre Norton
BLAKE: Captive to the Dark by Angelini, Alaska
Where You Least Expect by Lydia Rowan
What Happens Now by Jennifer Castle
Haven by Kristi Cook
The Lycan Collapse (The Flux Age Book 2) by Steven J Shelley
SEALed for Pleasure by Lacey Thorn
The Black-Eyed Blonde: A Philip Marlowe Novel by Benjamin Black
Our partner