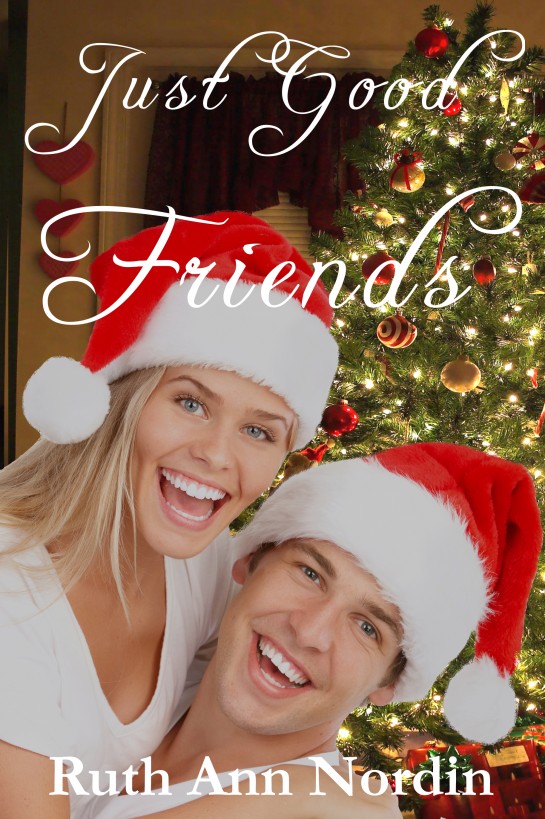 All rights reserved. No part of this
book may be reproduced or transmitted in any form or by any means,
electronic or mechanical, including photocopying, recording, or by
any information storage and retrieval system, without permission in
writing from the copyright owner.

This is a work of fiction. Names,
characters, places and incidents are either the product of the
author’s imagination or are used fictitiously, and any resemblance
to any actual persons, living or dead, events, or locales is
entirely coincidental.

This ebook is licensed for your
personal enjoyment only. This ebook may not be re-sold. If you
would like to share this book with another person, please do. Thank
you for respecting the hard work of this author.

Across the Stars
Series

Chronological List of All of Ruth
Ann Nordin’s Romances

Where to Find Ruth Ann
Nordin

Dedication: To Tiffany Davis for inspiring me to write this
book. I know it was a long time in coming, but it’s finally done.
Thanks for all your encouragement over the years!

Andy Deeb glanced around the upscale
restaurant. “Could you please keep your voice down? People might
overhear, and it’d be embarrassing.”

Then why did he pick a public place to
give her the big send off? Why not just do it on the phone or in an
email or in a private setting? Why wait until the meal was over,
and he was ready to pay the bill? He just spent the entire meal
talking to her as if nothing was wrong for goodness’ sakes, and
suddenly he set his napkin on the table and blurted out that he
wanted to see other people.

Forcing her voice lower, she said, “You
could have told me some other way.”

“
Yes, I could have,” he
allowed. “But I don’t want to sit around and watch you cry or have
to go into a long and drawn-out discussion on all the things you
could have done better. The truth is, there’s nothing you could
have done differently. You don’t fit my lifestyle.”

With a smile he might have bestowed
upon a child, he reached over and patted her hand. “You were fun
for a time, but I need to get serious about finding a wife. I need
someone who is more…more…” He shrugged. “Domestic.”

She rolled her blue eyes. Domestic?
“This is all because I can’t cook?”

“
Do you know how
embarrassing it’d be to have a dinner party where all you served
were peanut butter sandwiches? Look,” he took out his pocket mirror
and checked his reflection, “it’s not personal. You have your good
points. The last four months have been a blast. But I turn
thirty-eight next week. It’s time I got married and had some kids.
You know. Do the whole family thing. My chances of promotion would
be better that way.”

“
Can we at least wait until
after my sister’s wedding to break up?”

He winced. “Oh. Well, not really. I
sort of made plans with someone else for that weekend.”

“
But we made plans to go
there last month.”

“
Tiffany, your voice,” he
warned, giving another frantic glance around the room.

“
But you might.” He patted
his neatly trimmed mustache then shoved the mirror back into the
pocket of his suit jacket. “The thing is, you don’t fit my image of
what a wife should be. You’re a brilliant, dynamic woman who is
eager to learn new things.”

Her eyebrows rose. And those were
things that didn’t work in her favor?

“
I need someone who isn’t
going to outshine me,” he finally added when she didn’t say
anything. “You’re too attractive. When we go somewhere together,
people need to think I’m the better looking one.” Smiling, he
patted her hand. “I hope you understand.”

As he stood up, she asked, “Were you
planning to drive me home or should I find my own way?”

“
I took the liberty of
calling a cab for you. Don’t worry. I told him to charge my card.”
Giving her a pat on the shoulder, he said, “It’s been fun. Really,
it has.”

His gaze swept the room once more
before he hurried out of the restaurant. She shook her head. If he
expected her to get on her hands and knees and plead for him to
stay with her, he had another thing coming. For one, she had her
pride. And two, she really wasn’t all that upset.

Grabbing her purse, she went to the
entrance to grab her coat. This couldn’t have happened at a worse
time. Thanksgiving was coming up fast. That didn’t leave her with a
lot of time to get out of going to Montana. She quickly thought
over all the possible excuses she might use.

She could say she got sick, except her
mother would never buy it since she never got sick. She could have
some freak accident and say she was in the hospital, except she
doubted her parents would stay up there if she did. Knowing them,
they’d take the first flight to Omaha to rush to her
bedside.

After she buttoned her coat, she dug
her cell phone out of her purse. Yes, she could take the cab, but
she didn’t feel up to it. On a night like this, a girl needed a
friend to talk to. And in this case, there was no better friend
than Tyler Jackson.

The phone rang four times before Tyler
answered. “Your date’s over already?” he greeted.

“
He said you’re too
attractive and too smart?” he asked, a bewildered tone in his
voice.

“
How is it possible to be
too attractive and too smart?”

“
I don’t know, but
apparently, it means he can’t be the center of attention, and that
just won’t do.” She glanced at the cab as it pulled up to the curb
and wondered if she should tell the driver to find someone else to
drive. “How long do you think it’ll be before you get here?” she
asked him.

She told him the name of the
restaurant.

“
I’ll be there in fifteen
minutes. Is that soon enough?”

“
Yes, I have nothing else to
do tonight,” she replied.

After she hung up, she went to the cab
and knocked on the passenger side window. When the driver turned to
her, she said she already had a ride and thanked him for coming.
Then she returned to the restaurant to wait for her
friend.

The fact that Andy paid for a cab to
send her home was a stupid consolation gift. But the break up
really hadn’t been that much of a shock. She didn’t want to be with
him. Not really. And she could tell the interest had been waning on
his end as well. Why didn’t she just end it when she knew it wasn’t
going anywhere?

“
Because I need a date for
the wedding,” she muttered.

The hostess glanced over at her. “Did
you want something?”

The hostess turned her attention back
to the menus she was putting away, and Tiffany stared out the
window, mindlessly watching cars as they passed by. When Tyler
pulled up to the front, she hurried out to his car.

He chuckled as he redid his seat belt.
“I didn’t mind going in to get you, you know.” He pushed his
glasses up the bridge of his nose.

“
I know, but I was bored.
And,” she added as she got comfortable, “the servers kept giving me
sympathetic looks. I think they knew I got dumped
tonight.”

“
When you didn’t leave with
Andy, that was a big clue.” He shifted the car into drive and drove
down the street. “So, you’re too pretty and intelligent,
huh?”

She chuckled. “I’ve been dumped for
worse reasons.”

“
Hey, if you’re going to get
dumped, that’s the best reason for it. It beats being boring or too
serious or not being a good dancer.”

She shot him an amused look. “You don’t
dance that badly.”

“
I kept stepping on her
shoes.”

“
Well, if Candace only
wanted you so she could go dancing, good riddance. You can do
better than that. It’s better to have a woman who has a
brain.”

“
I know. I wasn’t that
serious about her anyway.” He turned left at the green light. “So,
you’re not upset about this? At all?”

He nodded and focused on the road in
front of him.

She studied his profile as the lights
from the posts lit the interior of the car. He had wavy blond hair,
dark green eyes, a slight dimple on his cheek when he smiled, and a
strong jaw. She’d always thought he was handsome, especially in a
softer light.

“
Are you sure you don’t want
to go to my eye doctor for some contacts?” she teased.

“
I like my glasses just
fine,” he replied, tapping the black frames. “There’s no way I’m
going to put flimsy contacts in my eyes. What if one gets
stuck?”

“
Yes, they do. I had a
friend in college who got one stuck. It slid to the top of his eye.
He had to fiddle with it for a half hour before it came out.” With
a shiver, he shook his head. “No way am I going to deal with that
headache. Plus, you have to keep them clean and buy more when you
run out. It’s easier to wake up in the morning and put the glasses
on.”

“
Or you could have surgery
to get perfect vision.”

He grimaced. “I’ll pass.” He turned
into the parking lot of her apartment and pulled into a parking
spot.

The Supervisor by Christian Riley
Infinite Fear by Jacqueline Abrahams
Plead Forgiveness: Betrayed Twice (Loyalty Series) by Dobsyn, Aury
Judgement Day by Michael Spears
Owen's Daughter by Jo-Ann Mapson
Star of Light by Patricia M. St. John
The Concubine by Francette Phal
Our Family Trouble The Story of the Bell Witch of Tennessee by Unknown
The Epigenetics Revolution by Nessa Carey
When the Music Stops by Paddy Eger
Our partner