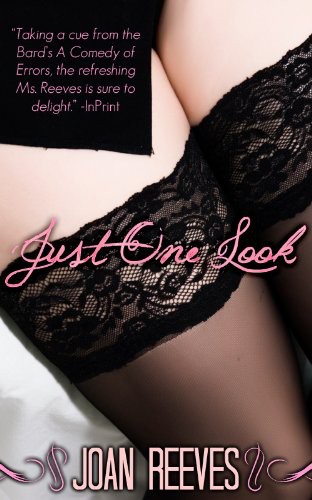 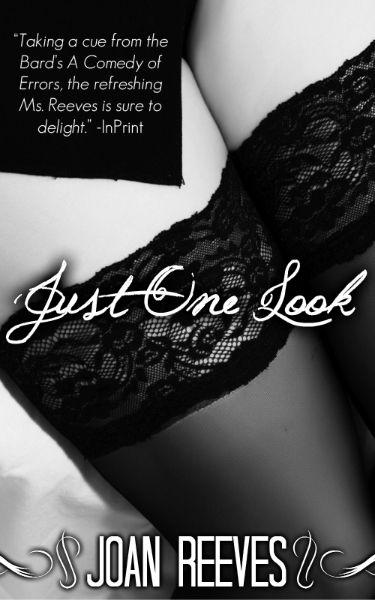 All rights reserved. Without limiting the rights under copyright reserved above, no part of this publication may be used or reproduced, stored in or introduced into a retrieval system, or transmitted, in any form, or by any means (electronic, mechanical, photocopying, recording, or otherwise) without the prior written permission of
Joan Reeves
, the copyright owner and the publisher of this book, with the exception of brief quotations embodied in critical articles and reviews.

This is a work of fiction. Names, characters, places, brands, media, and incidents are either the product of the author's imagination or used fictitiously. Any resemblance to actual events, locales, or persons, living or dead, is entirely coincidental. The author acknowledges the trademarked status and trademark owners of various products referenced in this work of fiction, which have been used without permission. The publication/use of these trademarks is not authorized, associated with, or sponsored by the trademark owners.

This ebook is licensed for your personal enjoyment only. This ebook may not be resold or given away to other people. If you would like to share this book with another person, please purchase an additional copy for each person with whom you wish to share it. If you're reading this book and did not purchase it, or it was not purchased for your use only, then you should purchase your own copy. Thank you for honoring the copyright laws and for respecting the author's work and her livelihood.

Just One Look
is dedicated to
Michael Clinton Reeves
. He brings such joy to my life with his personality, compassion, warmth, and sense of humor. He's an amazing young man who knows how to enjoy life and its blessings. He is a blessing.

And, as always, this book is for
Larry
, my husband, who was, without a doubt, created just for me. He has my heart. Forever.

Excerpt, The Trouble With Love

Excerpt, In the Garden of Seduction

Jennifer Monroe shivered and rubbed the goose-bumped flesh of her arms. A meat locker would feel warmer than a doctor's examining room, she thought. Why do they have to keep it so cold? And why do they act as if you have nothing better to do than sit around, clad only in a piece of paper and your birthday suit, and wait?

She drummed her fingers on the paper-covered examination table. The rustling tissue sounded abnormally loud. Abruptly she stopped and checked her watch again. Great! Just great, she thought, crossing her right leg over her left.

Quickly, impatiently, her right foot swung back and forth. When she was finished here, she might as well call Alva and cancel their lunch date. Due to the doctor's lack of punctuality, she'd never be able to make it downtown to meet her friend at the Dallas Epicurean.

Jennifer's sigh in the quiet room sounded resigned, even to her own ears. Alva was going to read her the riot act if she canceled again. But what could she do? This time it wasn't her fault.

Another doleful sigh slipped past her lips. Sometimes, old friends could be a real pain in the neck, she thought sourly. Especially when they decided that they had to save you from yourself. As Alva Hernandez, her best friend, had.

With an irritated mutter, she looked at the silver watch on her left wrist again. I was on time, she thought grumpily. Why isn't he?

Jennifer had spent a half hour in the outer reception area before being taken back to the examination room. She looked around the tiny room. If she hadn't been so irritated, she would have laughed at the room's decor. It looked as if someone had gone crazy with a bottle of America's most popular stomach relief medication. Everything in the room was nauseatingly pink. Even the giggly young nurse wore a hot pink uniform.

The nurse, who looked as if she'd been granted her diploma yesterday, had handed Jennifer a paper gown. The great leveler, Jennifer thought, glaring at the offensive disposable garment. She'd assured Jennifer that Dr. Penrose would be with her in a moment.

A moment? His definition of a moment must be different from hers, Jennifer noted in exasperation. She'd been sitting on the tissue-covered table for thirty minutes. A whole hour wasted, not counting the drive time from her office on Forest Central out here to north Dallas. Didn't this doctor realize that Jennifer had patients also? People waiting to talk to her. Adolescents who wanted, no, needed, to pour out their problems, she thought with a sigh, recalling the afternoon appointments she had scheduled. So many kids. So many problems.

Lately, her thoughts had too often followed that line. Alva complained that Jennifer had turned into a workaholic who had forgotten how to have fun. When questioned about the last time, she'd had a date, Jennifer couldn't even remember the occasion.

"You know what they say, Jen, about all work and no play," Alva had remonstrated, with a shake of her head which sent her rich brown curls dancing. Alva never seemed to have a problem remembering the occasion of her last date. In fact, she had so many that her only problem was keeping track of all of them. Jennifer half-suspected that her computer-intensive friend probably kept a detailed summary of them on an Excel spreadsheet.

"Maybe you're right, Alva," Jennifer said aloud, stretching and shifting uncomfortably again. She tried to listen to the soft music coming from the ceiling speaker, but the crunch and crackle of the disposable paper gown intruded, reminding her of the passing minutes.

The door popped open, and the nurse chirped, "Doctor will be with you any moment now."

Jennifer rolled her eyes in disgust. That's what bubbly Nurse Giggles had been telling her for an hour now. She started to ask for a blanket, a pillow, and a wake up call, but the nurse closed the door before she could utter the sarcastic words.

I should have just canceled my appointment when I found out Sylvia was out of town, she thought. Sylvia Haddad, who had been her gynecologist for the last four years, never kept her waiting this long. Today though, she was stuck with the new doctor in the office.

Apparently, the new guy who was subbing for Sylvia, a man who'd just moved here she'd been told, wasn't nearly as concerned with his patients' time. Dr. Joseph Penrose was as slow in arriving as autumn had been in chasing away the summer heat from the Metroplex. That was strike one against him.

Strike two was his last name. Penrose. Jennifer grimaced. She'd known only one other person by that name, and her experience with Matt Penrose hadn't enamored her of that particular surname.

For a moment, Jennifer allowed herself to think of the black-haired, blue-eyed king of Lake Grayson High School. She remembered the first time she'd seen the handsome senior. Zing! Love at first sight.

Unfortunately, she also remembered--quite clearly--the last time she'd seen the dirty snake. Hate at last sight! He'd turned out to be worse than all the boys she'd had to contend with since her chest had gone from flat as a board to fully-inflated in less time than it took to learn how to shave her legs without causing bodily harm.

All those high school adolescent throwbacks couldn't have said what color her hair or eyes were even if they were standing right in front of her because they never raised their eyes beyond her bustline. None of them had hurt her as deeply as Matt had.

Thank heavens that whole situation was another lifetime ago. She hadn't seen Matt Penrose since that December evening fifteen years ago. Her under-employed mom, bless her dear heart, had moved them from Michigan to St. Louis, Missouri, in search of a better job over Christmas break. It hadn't been the first time they'd moved, following opportunity, but this had been the only time that Jennifer hadn't minded. In fact, the move to St. Louis had turned out to be the best thing that had ever happened to her and her mom.

Funny, she hadn't thought about her troubled adolescence--nor her first love Matt Penrose--in ages. She tried to picture Matt as he probably looked now. Let's see, he'd be in his early thirties, she thought.

For the first time in the last two hours, Jennifer smiled. Matt, the heart throb of high school, was probably starting to lose his hair by now. More than likely, he had a beer gut. Poor guy. He was probably still stuck in Lake Grayson, unless he'd had to move to get a job in one of the auto assembly plants. With the way the economy was, the poor guy was probably struggling. Jennifer shrugged. Fortunately, she'd never see him again so it was rather pointless to waste any more energy speculating about him.

Just when she'd decided the doctor had forgotten her existence, the door opened. A whisper of aftershave that brought to mind last summer's tropical vacation teased her senses. Ummm, she thought, breathing deeply. Suntan oil and muscled bodies baking in the summer heat. The scent accompanied the tall man who entered.

The cordial smile on Jennifer's lips froze. The man had Matt Penrose's curly black hair. Her breath caught somewhere between her lungs and her throat. He also had Matt's dreamy blue eyes. And Matt's face. Had she conjured an adult version of him from her overworked imagination?

Jennifer shook her head to clear it, closed her eyes tightly, then opened them again. The man still looked like a grownup Matt Penrose. Finally, her brain registered the white lab coat he wore. For the first time in her life--no, Jennifer thought, make that the second--she thought she was going to faint. Or maybe throw up. Oddly enough, both times had been caused by the man standing in front of her.

Over the buzzing in her ears, she heard the giggly nurse breathlessly announce, "Dr. Monroe, this is Dr. Joseph Matthew Penrose."

Matt Penrose hid his annoyance at the nurse's ostentatious introduction. After a week of working with Whitney Anders, who was new to Sylvia's staff he understood, he'd had plenty of experience in ignoring her unprofessional behavior. Surely Sylvia hadn't seen this side of Nurse Anders. If she had, knowing Sylvia for the no-nonsense woman she was, she'd have sent the silly young woman to the unemployment office--or a women's consciousness workshop--before now.

With each giggle from the nurse, he regretted his decision to move his practice from the rural area surrounding Conroe to Dallas. But going into practice with Sylvia had seemed ideal when he'd wanted to move closer to his parents who lived in Plano, just east of here. When Sylvia came back though, they were going to have to discuss Nurse Whitney Anders. If he made it that long without strangling the irritating young woman.

Only another week of this before Sylvia returned, he thought, rolling his eyes at the ceiling as Whitney accidentally brushed against his arm and lingered. Her well-rounded breast felt like a stone pressing into his bicep. Silicone, he thought, not really surprised.

B0089ZO7UC EBOK by Strider, Jez
The Squire's Quest by Gerald Morris
The Diamond Secret by Suzanne Weyn
Loving Lauren by Jill Sanders
Kind Are Her Answers by Mary Renault
Velvet by Temple West
The Rancher and His Unexpected Daughter by Sherryl Woods
Cursed by Tara Brown
A Kind of Grief by A. D. Scott
The Treacherous Net by Helene Tursten
Our partner