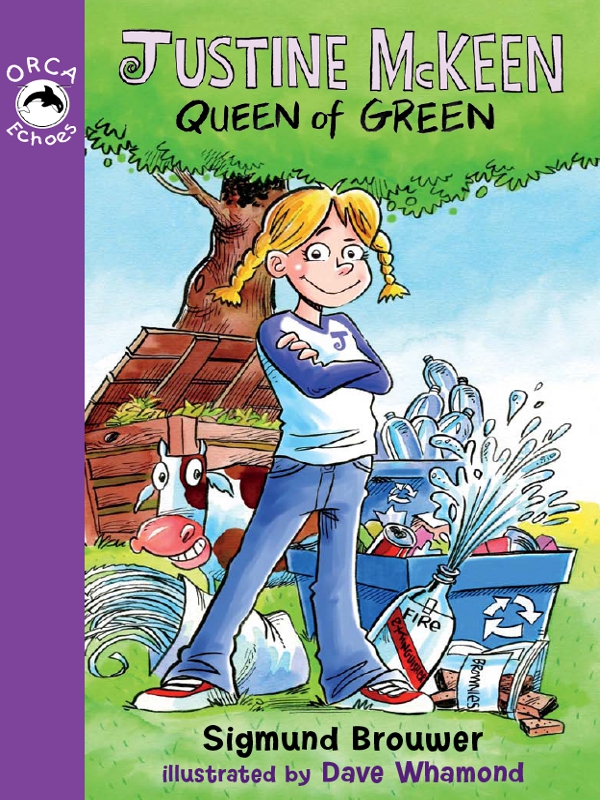 To Barbara Kidd,
the Green Queen at Arthur Public School.
And a big thank you to two of the greenest families I know:
Ivan, Selena, Sydney and Adam Hucal;
and Morris, Lesia, Myra, Adrian and Kalynna Hucal

Summary
: Justine and her friends are all about being green and helping the planet,
one environmental project at time.

Orca Book Publishers is dedicated to preserving the environment and has printed this book
on paper certified by the Forest Stewardship Council
Â®.

Justine McKeen sat at a table in the school lunchroom with her two new friends, Safdar and Michael. It was noisy and busy, as usual. The older kids were leaving to make room for the kids in Justine's class.

“Did you see that?” Justine said. “The guy in the blue hoodie just threw an empty can in the garbage.”

“The guy in the blue hoodie is the meanest guy in the school,” Safdar said. “He is older and bigger than us too. He can do whatever he wants.”

“That empty can should have gone in the recycling,” Justine said.

She set her backpack on the table. She ran toward two older students who were clearing their lunch trays off into the garbage. They stared at Justine as she reached into the garbage can.

Safdar looked at Michael. “If she's that hungry, maybe we should give her some of our lunch.”

Michael poked the food on his tray with his fork. “She's a fast learner. Only a couple of days at this school, and already she knows garbage tastes better than cafeteria food.”

“Who was joking?” Michael said.

Justine was holding a juice can and some papers. She stepped toward the recycling bins. She threw the juice in one and the papers in another.

She joined Safdar and Michael. “I'll be right back. I need to wash my hands. You know, there was a lot of stuff in the garbage that would be great for a compost. What do you think, guys?”

“That we're in trouble,” Michael said. 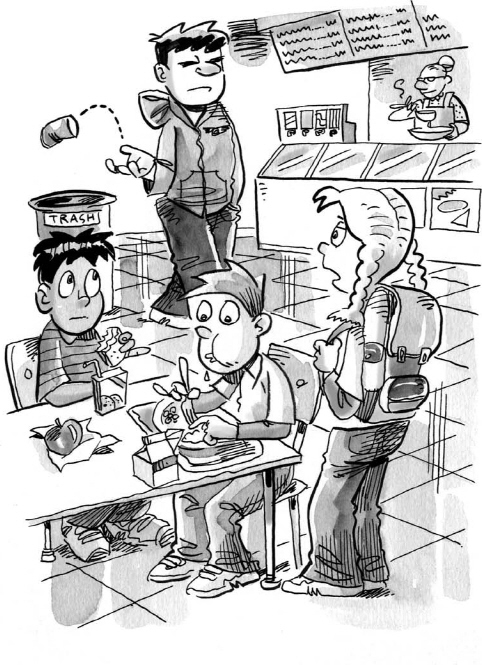 “For wanting to recycle?” she asked.

“What's your name?” Jimmy Blatzo asked Justine. He towered over her and looked angry.

“Justine McKeen,” she said. She stuck out a hand and waited for him to shake it. Her hand had mustard on it. “Nice to meet you, Jimmy Blatzo.”

He pushed her hand away. “I heard you dug in the garbage for my empty juice can. You made me look bad. Is that what you wanted? Because I don't like being made to look bad.”

“You look like my cousin Joe,” Justine said. “He lives in Detroit. Detroit is an amazing city. Cars. Lots of cars. Now they are building electric cars there. Isn't that great? It will really help the environment. I would like a blue one someday. Like the color of your hoodie. That's a nice hoodie. What's the picture on the front of your hoodie? Is itâ?” 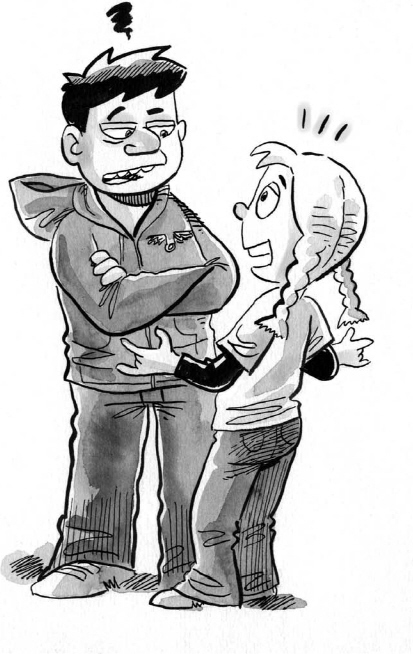 “Are you listening to me?” Jimmy Blatzo said. He crossed his arms and took a step forward. “You made me look bad.”

“The picture on your hoodie looks like the wings of a bird,” she said. “If you moved your arms, I could see it better. And maybe stand back a little. I hope it's a bird. Birds are cool. We have birds in our backyard. Cardinals. Blue jays. Evenâ”

Jimmy Blatzo's face turned very red. “Enough!” His head looked like a tomato that was about to burst.

“Maybe we should go,” Safdar said. He stood and handed Justine her backpack. Michael stood too. Safdar and Michael took a couple of steps back. 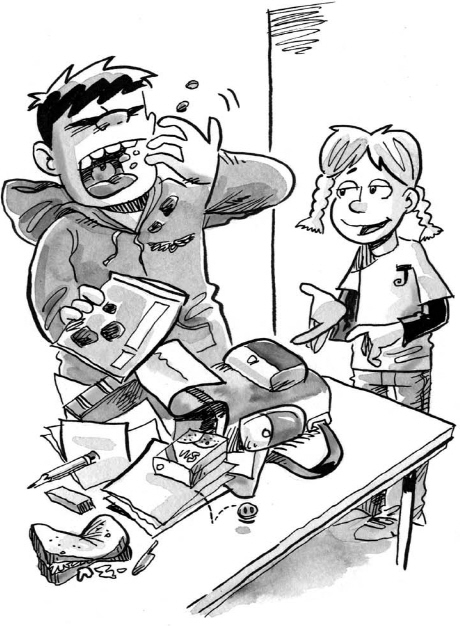