When eighteen-year-old Methusal Maahr is framed for the murder of her oldest friend, she will do anything to expose the true killer and clear her name, including team up with her arch rival in the Kaavl Games, Behran. But all clues point to her guilt…and appear to tie into a conspiracy regarding the new peace talks with their oldest enemies from Dehre.

While peace looms on the horizon, Methusal doesn’t trust it. Mentàll Solboshn, Chief of Dehre, is not what he appears to be. Her determination to discover the truth soon pits her against the formidable Chief. Not only is he the best kaavl player in the land, but he is determined that the peace plan will pass. Can Methusal’s rare kaavl skills possibly outmatch him, and stop him from succeeding with his devious plans?

Methusal is ready and willing to do anything to protect her community of Rolban—even put her own life on the line to expose and defeat a dangerous political foe. But little does she realize the true danger may lie within her own community…

(Book One of Quadrilogy)

A Diamond Press book / published in arrangement with the author

This book, or parts thereof, may not be reproduced in any form without permission, except in the case of brief quotations embodied in critical articles or reviews. The scanning, uploading, and distribution of this book via the Internet or any other means without the permission of the publisher is illegal and punishable by law. Please purchase only authorized electronic editions, and do not participate in or encourage piracy of copyrighted materials. Your support of the author’s rights is appreciated.

To my friends, who have always encouraged me. 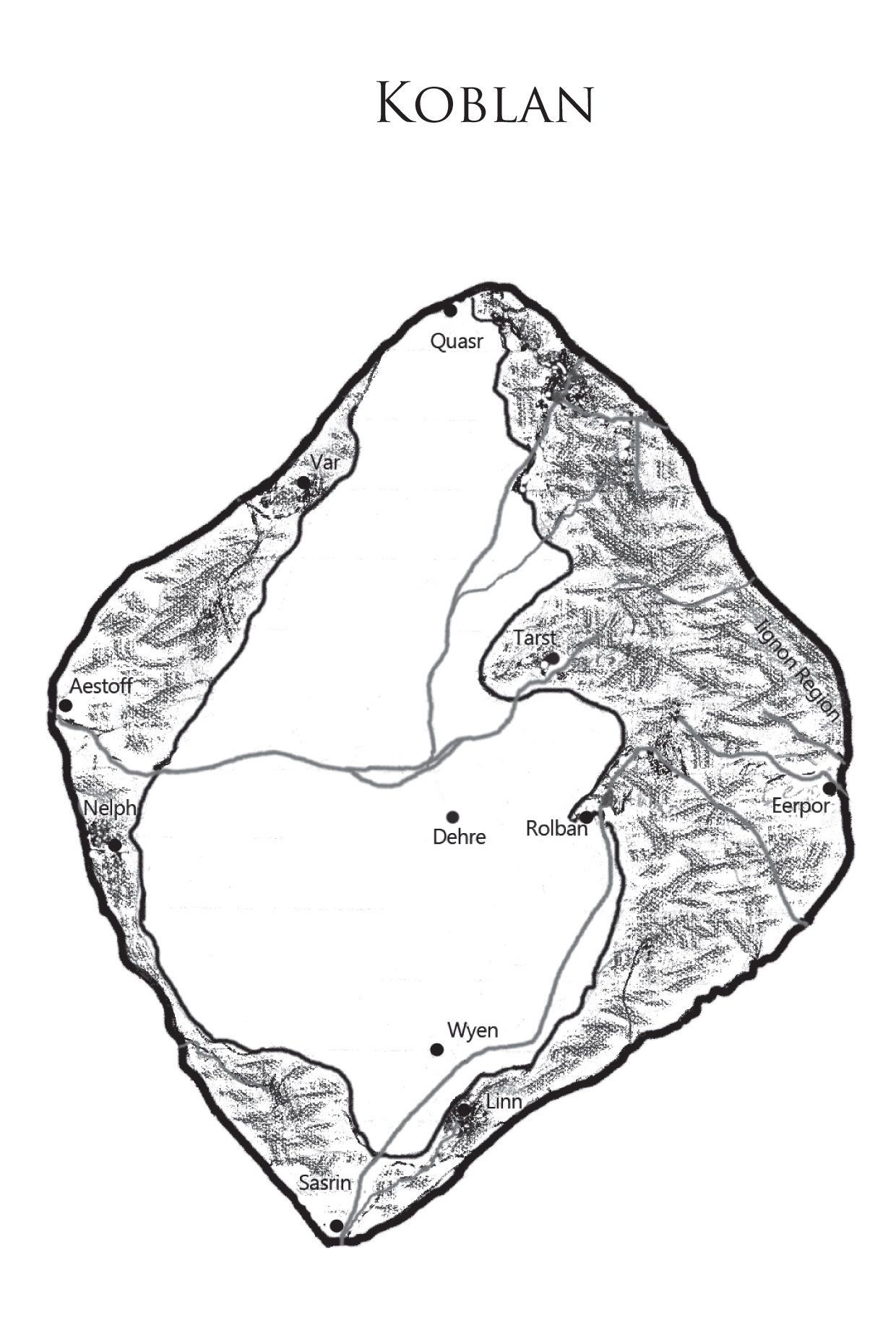 Kaavl levels (from highest to lowest):

Ultimate level (only Mahre ever achieved)

Capitol of the Zindedi Continent

The Presidente of Zindedi
fingered the sharp edge of his sword, and smiled as the blade caught his skin. Red bubbled up. War. He loved the taste of it. He loved the smell of it.

Hadn’t he unified his continent with one ruthless, bloody stroke? Now the entire continent of Koblan would fall, too.

A hard knock sounded on the wooden door of his office. “Presidente.”

“Enter, General.” The Presidente smiled as a stocky man strode into the room. “Brother. Sit.” He plucked a plump red fruit from a bowl and turned it in his hand.

General Greisn Rohasch smiled, and his teeth gleamed a pale yellow beneath his mustache. His black General’s cap fit tightly on his spiky black and silver hair, and his amber eyes, which were set in his square, florid face, appeared a bit unfocused, as usual. “Presidente. You have a report?”

“Yes.” Thoughtfully, the Presidente stroked the fruit over the blade. “Hatred is stirred. Vengeance is sought. Soon the village of Rolban will fall to her enemies, as we have long planned.”

“And the ore?” General Greisn’s voice sharpened. “It will be ours?”

“Ripe for you to pluck. Only a few more weeks until the fruit is ready for harvest.” The President tossed a dull, silver lump of metal to the General, who caught it with whip-like swiftness. “A specimen.”

The General turned it over in his thick fingers. “Nearly perfect.”

“Yes.” The Presidente smiled. “And victory is assured.”

The Presidente snorted. “Mind games cannot win wars. Neither will Koblan’s crude weapons. I warned the spy to focus on his job. Not kaavl. Soon we will bring the Koblan continent to her knees.” He stroked the fruit over the blade again, and smiled. “It will be as simple as taking a toy from a child. They are ignorant of our existence. I might pity them, if they were not so stupid.”

The fruit’s skin split, and red juice ran down the Presidente’s skin.

The General giggled, and his eyes gleamed amber, like the fires of hell. “I am ready to lead the charge.” Spittle formed at the corners of his mouth. “I anticipate plucking their ripest fruit.”

“Patience, my brother. All in good time. Rolban must first fall, and the three communities become weakened. And then we will invade the Koblan continent.” The Presidente bit into the sweet delicacy. “Raping ore from that fertile land will be a pleasure. And the fruit of her womb will deliver to us the world.”

The velvet night cloaked Renn.
Only his harsh, unsteady breathing broke the silence. His moccasined toes curled deep into the soft earth of the crop plateau.

He stood only a step from the edge. Far below, the cliff crashed into a jumble of rocks, and then the plains stretched on, black beneath the star-pierced sky. Running to eternity.

Why had Methusal asked to meet him here?

Renn’s trembling fingers clenched around the cold metal object in his pocket; the proof he’d risked his life to find. A parchment crinkled next to it.

He had to warn the others, and soon. Unfortunately, he knew the identity of the traitor, but little else. What was the traitor’s mission? What else did he plan to steal from Rolban, and why?

Methusal’s necklace was the key.

A cool breeze kissed his cheek and he breathed greedily, trying to calm the nervous gallop of his heart.

Why hadn’t she arrived yet?

Releasing the heavy object, he pushed a shaky palm across his brow. The thefts from the supply room hadn’t seemed like much, at first—only a hint something was wrong. The stolen ore was another matter.

Now he knew the threat ran deep, and originated in a foreign land—Zindedi. A land far from the Koblan continent’s shores. And no one knew this but him. And the traitor. And possibly Methusal. He believed he could trust her. He hoped he wasn’t wrong.

It was dangerous out here. His gaze slid to the plain floor. The wild beasts were out, but that didn’t explain the apprehension licking through him.

Footsteps whispered over the earth. He jerked around, his shoulders rigid, and heart pounding.

A dark form stalked toward him. It wasn’t Methusal. It was a man. A big one.

No.
How had he found out?

“It is time we talked.” The familiar voice was a hiss.

“Where’s Methusal?” To his disgust, his voice trembled.

“She didn’t receive your note. I followed you and stole it.”

“But…” Bewildered, Renn uncurled his fist. Pale parchment glowed in the starlight.

“Give it.” The dark form grabbed his wrist and ripped the paper from his fist.

Horror crept through him. “She never got my note?”

“Soon, she will.” Another soft chuckle. “An edited version, anyway. And this note,” he crumpled it in his fist, “is one I wrote.”

The traitor had written the note that Renn had received. Not Methusal. The hairs on his neck rose, like the hackles of an apte beast.

A knife appeared in the traitor’s hand and glinted in the feeble starlight.

Renn choked back a terrified cry. He’d always been so careful, and so neat and logical in everything he did. But he had never foreseen this. Never. He couldn’t seem to think clearly. “I know what you’ve been doing!”

“A few pots. A few skins,” the soft voice scoffed. “And…oh, yes.” The black form stepped closer, knife glinting inches from Renn’s throat. “Give back what you stole from me.”

“Leave me alone.” His chest felt tight, clamped by fear.

“Sorry. You know too much.”

“You know who I am. You found the ore. And the letter to my Presidente. Can’t allow that.”

“I won’t tell!” Backing up, Renn’s heel hit solid rock. It was the lip of the cliff, a handbreadth from the edge. His brain felt fogged. He needed to escape. But how?

“The ore.” The voice sounded cold, now. Determined. “I’ll give you an exchange for it.”

“Exchange?” Would he be allowed to live, after all?

Renn pulled the chunk of metal from his pocket and thrust it at the other man. A pale smile glimmered through the darkness, and then a smooth, flat rectangle with cut surfaces jabbed into his palm. His heart hammered. “Where did you find this? You’ve been in my compartment!” Since he wanted his hands free again, he quickly shoved it into his pocket.

“As you have been sneaking through mine. Did you find your answers?”

Why hadn’t he been more careful? Renn’s eyes darted left and right. He needed to buy time—finally, a rational thought. “Tell me then…why? What’s this all about?”

A chuckle hissed. “Power, ore…and so much more. And kaavl is the key.”

“Key? Key to what?” But he was no longer listening. He was ready to make his move.

“Traitor!” With a snarl, Renn lunged to the right, but out of the corner of his eye the knife slashed through the inky black. Pain ripped into his neck. And then the dark form pushed him, hard.

His heel tripped over the stone lip, and wind rushed by his ears, soaring with his unending terror. Falling…falling.

And then nothing. Blessed darkness.

Of the Abyss by Amelia Atwater-Rhodes
Física de lo imposible by Michio Kaku
House of Dreams by Pauline Gedge
Infinite Ties (All That Remains #3) by S. M. Shade
Take Another Little Piece of My Heart: A Groupie Grows Up by Des Barres, Pamela, Michael Des Barres
Romeo and Juliet: A Vampire and Werewolf Love Story by H.T. Night
Witness to Death by Dave White
The Fearsome Particles by Trevor Cole
Dangerous to Her by Virna Depaul
Exile's Challenge by Angus Wells
Our partner