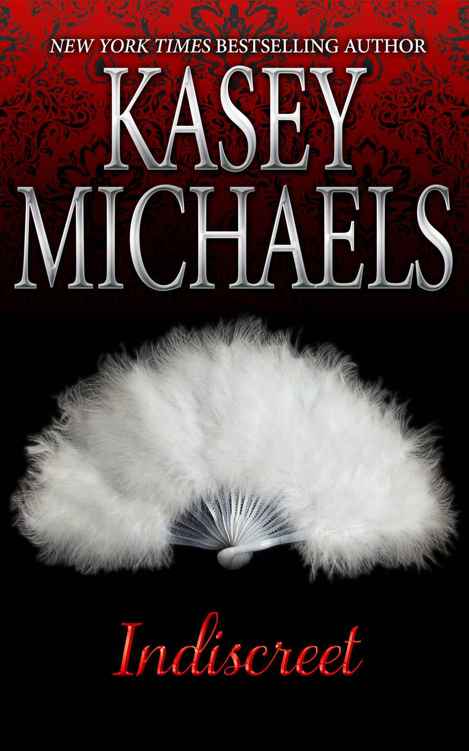 To Maggie Osborne, who lifts my heart; to Jill Churchill, who teaches me how to be grown-up; to Jasmine Cresswell, who knows what real life is; and to Marianne Shock, who seeks my dreams and takes them higher.

E-Book published by Kathryn A. Seidick, 2012

All rights reserved. No part of this publication may be reproduced or transmitted in any form or by any means, electronic or mechanical, including photography, recording or any information storage and retrieval system without written permission of the author.

The Ninth Miss Noddenly, a novella

A Masquerade in the Moonlight

In about 1997, I took a break from Regency historicals to write a trilogy set in Colonial Pennsylvania... pretty much in my own backyard, actually. Ever since I'd compiled our township's history for the nation's Bicentennial in 1976, I'd had an itch to use all my research, so I finally scratched it!

I'm glad I did, because by 1998 I was so ready to write another Regency historical,
Indiscreet
fairly flew from my fingertips onto the computer screen. And I had a ball! I had been so engrossed in history and wanted a break from more serious topics, so I wrote myself a romantic farce (I always write for me, what makes me happy at the time, figuring if I like it maybe someone else will, too).

Indiscreet
has, according to reviewers and readers, one of the funniest Prologues in fiction. Even I still giggle a bit when I think of it!

But there's a serious side to this romantic farce; two people who think they know who they are, what they want ... and then get smacked in the face with the realization life doesn't always fit into neat little boxes.

As I said, I had a grand time writing Indiscreet, and revisiting the book to prepare it for its e-book version delighted me all over again. It's a good rainy-day-and-I-feel-blah-and-need-to-laugh book. Enjoy!

If we believe our logicians, man is distinguished

from all other creatures by the faculty of laughter.

An apology for the Devil:

It must be remembered

that we have only heard

one side of the case.

God has written all the books.

Nearer, my God, to thee,

I
f there existed anything more stultifyingly dull than one of Lady Buxley’s house parties, that gloomy event had not yet been invented. Being herded through drafty portrait halls to admire some deservedly deceased Buxley relatives, being forced to participate in pantomimes, and tame-stakes card parties drove Lady Buxley’s guests to inventiveness. And the inventiveness of her guests, meant to alleviate their nearly mortal pain of boredom, was anything but ordinary.

Sir Harry had commandeered a prodigious collection of slim wooden toothpicks with high hopes of building a miniature Saint Paul’s. He eventually settled on a less lofty aspiration, the finished project much more closely resembling the new King’s stables at Brighton. Everyone admired the creation mightily anyway—so great was their boredom—until one of Lord Buxley’s dratted hounds bounded into the morning room, batted his tail about like Joshua’s trumpet, and brought the toothpick walls tumbling down.

Lady Beechum had begun writing a wildly romantic novel peopled with beautiful maidens in dire peril and the handsome knights who rescued them. She spent a full afternoon scribbling notes for a tome that had a lot to do with her wishes and dreams, and very little to do with either her reflection in her mirror or the estimable, and quite abdominally expanded Lord Beechum.

Baron Bader had ferreted out a hidey-hole on the third floor, just behind the family chapel. He’d proceeded to outfit the small, windowless room with a table and chairs, candles, several decks of cards, and a goodly supply of port and cigars. He had then cleverly peopled this snug den with three fellow guests whose pockets were sufficiently deep as to be interested in playing for five times the tame-stakes Lady Buxley insisted upon. Once all of this was done, the baron clapped a green-leather visor on his head, and announced around the cigar clamped in his teeth: “Stakes, gentlemen?”

Mr. Reginald Stokes had retired to his chamber on only the second day of the party, locked the door behind him, and fallen headfirst into a bottle. There he steadfastly remained for three days running. But then, Reggie had never possessed much of an imagination.

It fell to Lady Buxley’s most esteemed guest—the coup her sister-in-law, the much hated Isobel, could not possibly hope to top—to His Grace himself, Cecil, Eighth Duke of Selbourne, to find his own amusement until the curst rain stopped and he could flee the house party.

His Grace also was not without invention. Oh my, no. And he had a particularly wonderful “invention” in mind.

Her name was Constance Winstead. The Widow Winstead. A small, beautifully rounded (especially in the heels) creature possessed of the brightest smile, the greatest wit, the most delicious disposition—and the most incredibly perfect pair of lush, fully rounded, rose-tipped breasts England had ever been privileged to see. And, if Dame Rumor could be believed, a whacking great lot of England had enjoyed that privilege.

As Constance had been heard to say, widowhood did not, in her opinion, constitute a sentence of celibacy. With a love for her fellowman that, in some quarters, might be considered taken to extremes, Constance had been wooed by and bedded by a great variety of gentlemen. Indeed, her lovers had ranged from scions of the great houses to the powerful in His Royal Majesty’s government—and everyone in between.

These gentlemen all shared two things in common: their attraction to Constance and healthy fortunes. The former was a given—every man with eyes in his head and a beating heart was attracted to Constance. The latter was of importance to Constance, who had found that amassing jewels, houses, fine furniture, and a comfortable income from the Exchange were the most potent aphrodisiac of them all.

That is not to say that Constance Winstead’s liaisons were motivated by greed. Oh, no. She had a warm, giving, possibly too-trusting heart, and had genuinely adored every last one of her lovers. But, of them all, Cecil had most invaded her heart; so much so that she had been steadfast to him for three long years, their association now having outlasted that of Constance’s with her late husband, Godfrey. The pair had become as close to inseparable as Society allowed, which meant that they were often seen together at Covent Garden and Vauxhall. It also meant that Lady Buxley would have no more included the Widow Winstead in her list of houseguests than she would have clutched a canary feather in each bejeweled paw and attempted to fly from the parapets.

Which brings us back to Lady Buxley’s ongoing house party and His Grace’s inventive turn of mind...

Leaving his wife behind in the music room while Lord Buxley sang off-key and the resurfaced but still three-parts castaway Mr. Reginald Stokes whimpering in a corner, His Grace bounded light-footedly up the two flights of stairs that took him to his bedchamber.

“Rain’s stopped, has it, Reese?” His Grace asked his valet jovially, already stripping off his cravat as he peered hopefully toward the pair of French doors that led onto the narrow balcony outside his chamber. “Good. Good. Now take yourself off, and don’t come back.” He winked, sure his man understood. “I’ll fend for m’self, if you take my meaning?”