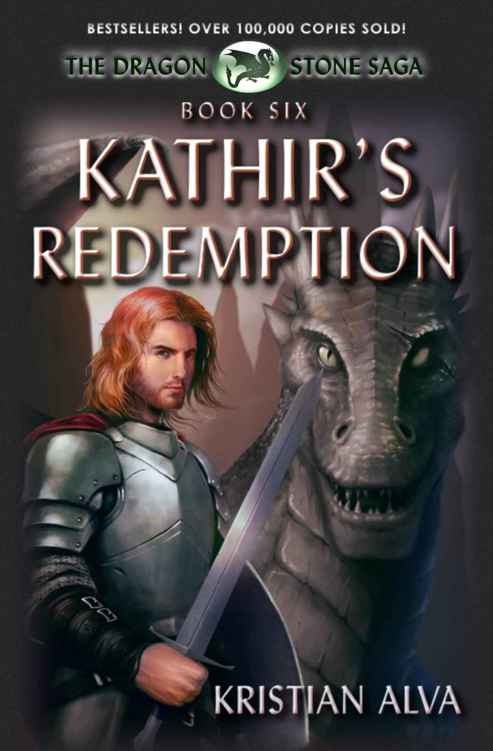 Other Books in the Dragon Stone Saga

4. The Fall of Mount Velik

First Edition. This book contains material protected under International and Federal copyright laws and treaties. Any unauthorized reprint or use of this material is prohibited. No part of this book may be reproduced or transmitted without express written permission from the publisher, www.defiantpress.com.

Find out more about the author at her official website:
www.KristianAlva.com
.

Printed in the United States of America. The Dragon Stone Saga
®
is a registered U.S. trademark. All rights reserved.

Other Books in the Dragon Stone Saga

Book 2: The Return of the Dragon Riders

Book 5: Rise of the Blood Masters

Book 8: The Fall of Miklagard (forthcoming)

The Dragons of Durn

Tallin awoke in darkness, deep inside the dungeons of Balbor. Many days ago, their group had gone to Balbor to destroy the temple and had been captured. Tallin, his aunt Mugla, and two elf dragon riders, Amandila and F
ë
anor, had been dragged into the underground dungeons.

The Balborites abandoned them in a dark cell without food and then ignored them. Armed guards walked back and forth in front of their cell day and night, the sound of their boots striking the ground on the other side of the door. No one spoke to the prisoners or even acknowledged they were there.

Tallin glanced over at Mugla. She lay against the far wall, emaciated from hunger. Even Tallin, who was used to going without food for days at a time, could feel the lack of sustenance gnawing at him. Luckily, they had access to water, which was occasionally shoved through the door in a leather water skin.

There were no windows in the cell
—
only a tiny slit in the door, which left the air inside stuffy and hot. They were all  tied with enchanted ropes, except the elves, who were shackled against the wall.

Tallin felt his legs throbbing. He had been frozen in the same position for hours. He tried to wiggle his feet to increase blood flow, but it didn
’
t help much.

The Balborites had seized all their weapons, but Tallin had managed to conceal a small light crystal in his boot. Tallin kept the magical light deliberately dim when he used it. Any flicker of light was risky, but using the crystal was worth it to stave off despair. Sitting in darkness made their situation feel even worse. The small spark of light that the crystal produced would have been barely noticeable to human eyes, but since Tallin was half dwarf, it was bright enough to see everything around him.

While Tallin and Mugla sat on the floor, the elves were chained to the wall and, were in much poorer shape. Amandila and F
ë
anor
’
s ears were pierced with iron wire, which was designed to disrupt their powerful magic, including their ability to shape-change. Tallin had never thought he would feel any sympathy for elves, but it was impossible not to feel something for the two miserable-looking creatures who hung limply at his side.

The elves were both semi-conscious. With their ears pierced by iron wire, their carefully-maintained glamour was gone. Their eyes were slick and shiny, their faces swollen and bruised.

Both had screamed in agony when their ears were pierced, but now they just groaned, twisting their bodies as the iron slowly worked its way through their bloodstream. The iron was poisoning them, weakening them by degrees. Though the elves hung near one another, neither  seemed to realize that the other was even there. Or perhaps their pain was so great that they simply didn
’
t care.

Tallin could reach out and touch them, and he had tried to remove the iron. But as soon as he had touched it, the wire only twisted tighter, causing Amandila to cry out in pain. He didn
’
t try again after that.

Mugla raised her head weakly.
“
Do ye know what day it is, dear?
”

Mugla sat up and propped herself up against the wall. She looked emaciated and had cracks at the corners of her mouth. But when she spoke, her voice was strong and level.
“
They
’
re starvin
’
us, weakenin
’
us.
”

Tallin looked toward the elves.
“
What about them?
”
Their faces were almost unrecognizable
—
grossly swollen and puffy.
“
Will they survive?
”

“
The odds aren
’
t in their favor, but at least they
’
re still alive. Keepin
’
an elf in captivity is a risky business. Elves are powerful and vindictive if they escape. I
’
m surprised the Balborites haven
’
t killed
‘
em yet.
”

“
I
’
m sure they
‘
ave their reasons. The High Priest probably wants to make an example out of us. As for the elves, they
’
ll fare worse than us. We
’
ll be hanged, but the elves will be tortured. The Balborites will kill them for sport.
”

Tallin raised his eyebrows.
“
What?
”

A humorless smile lifted the corners of Mugla
’
s lips.
“
An elf capture is a rare thing. The high priest enjoys watchin
’
‘
em tortured. Because elves are immortal, the show lasts a very long time. They
’
ll die eventually
…
but very, very slowly. Sometimes , they chain prisoners to a post and release dogs on them, to tear them apart. They kill rebellious slaves that way.
”

A metal door opened and shut, and then came the sound of heavy footsteps approaching. Tallin put a finger to his lips and shook his head back and forth. He extinguished his light crystal and tucked it carefully back into his boot.

They watched a square of light at the far side of the room grow as the door to their cell opened. Tallin blinked from the bright light that entered their cell. Skera-Kina stood behind the guard. She was accompanied by a younger man who was dressed similarly, but did not have facial tattoos. Tallin guessed he was her apprentice.

She pointed at Tallin.
“
You there
…
halfling. Stand up. The High Priest demands your presence.
”

The guardsman covered his nose, but the sour smell inside the cell didn
’
t seem to bother Skera-Kina.

Good-bye Stacey, Good-bye by Ann M. Martin
Frankenstorm: Chaos Theory by Garton, Ray
When Only Cupcakes Will Do by Daisy James
Michael Eric Dyson by Is Bill Cosby Right?: Or Has the Black Middle Class Lost Its Mind?
What a Demon Wants by Kathy Love
Together Alone by Barbara Delinsky
The Hunting Trip by William E. Butterworth, III
EDEN (The Union Series) by Richards, Phillip
Midnight in Siberia: A Train Journey into the Heart of Russia by David Greene
Stealing Fire by Jo Graham
Our partner