Read Keeper of the Doves Online

Keeper of the Doves 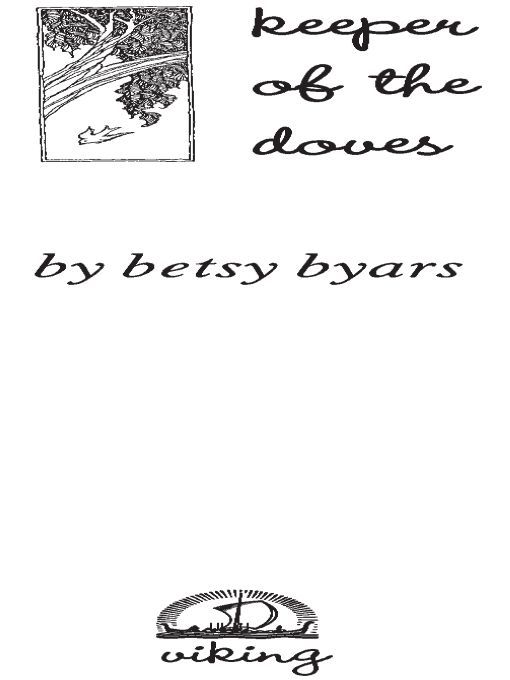 chapter one
A
for Amen
“A
nother girl? Not another girl? Don't tell me I've got another daughter!”
These were the first words my father spoke after I was born. Of course I was just minutes oldâway too little to rememberâbut I have heard the story so often that I really think it is my memory.
It was a hot summer evening, 1891, and thunder could be heard as a storm rolled in from the west.
Papa's voice was very loudâespecially when he was upset. The words certainly would have come through the door to Mama's room, rivaling the thunder for attention.
“She's a fine, healthy girl,” Grandmama said. It was she who had brought the bad news. “Be grateful, Albert.”
Papa seemed not to hear her. He looked up at the ceiling. “What's left?” He dropped his hands to his sides in a gesture of hopelessness.
“We've got Abigail! Augusta! Arabella! Annabella!”
My father, in his despair, said the names so loudly that my sisters, thinking they had been summoned, rushed into the hall in their nightclothes.
“You have a sister,” he said.
“A sister?” In my memory they were disappointed as well.
“Yes!”
“What's her name?” Abigail asked. As the oldest, she spoke for all of them.
“I'm thinking.”
My father had insisted that his children's names all begin with an
A
. “When I have used up all the beautiful
A
names, I will move on to
B
,” was his explanation.
“There's nothing left,” he said.
“Does this mean you will go on to the
B
s?” Abigail asked.
I waited in my blanket for my fate. It came, but I was too little to know how I was doomed.
“Amen!” my father pronounced.
There was a silence.
“Papa, that's not a name,” Abigail said, “That's something you say at the end of a prayer.”
“It
is
the end of a prayerâa prayer for a son. Amen!”
“Albert,” Grandmama said, “you're upset. Think about it andâ”
“Amen!”
My father ran down the stairs. “Albert,” Grandmama called after him, “the storm!” He slammed the screen door as he left the house, driven by his own inner storm.
In her room, my mother kissed my brow. She whispered, “We'll call you Amie,” in a soothing way.
But in the family Bibleâwhere it countsâit says: Born July 11, 1891, a daughterâAmen McBee.

chapter two
The Bellas and the Parts of a Dog
“B
ellas! Bellas! Are you looking after your sister?”
“Yes, Aunt Pauline,” the twins called back in unison.
“Well, don't get into any mischief.”
“No, Aunt Pauline.”
I had just had my third birthday and was, as usual, in the Bellas' care. The twinsâArabella and Annabellaâwere called the Bellas. No oneânot even Mamaâcould tell them apart.
The Bellas were only two years older than I, but because there were two of them, they seemed twice as smart. They had taken me on as their personal improvement plan and on this day were enlarging my vocabulary.
We were beneath one of the willow trees from which our home got its nameâThe Willows. Keeping us company was Scout, the dog.
“What is that?” a Bella said, pointing to the dog.
“Chin.”
“A dog doesn't have a chin,” she said.
“He do.”
“Do not.”
“It be a little chin, but it do be a chin,” I argued. My grammar wasn't perfect, but I did know the parts to a dog. I had recently learned that everything had a name and gobbled up words the way other three-year-olds gobble sweets.
Scout sat quietly, stoically waiting the outcome of the debate over his chin.
“Oh, all right. It
be
a chin,” a Bella said, stressing my bad grammar.
Scout was Papa's dog, but he'd had four other little girls teach him patience, so he lay on his side, motionless except for his eyes, which rolled around, taking in everything. Without lifting his head, he could keep watch on the whole world.
I started over. “Chin . . . nose . . . eyebrow . . .”
I paused to glance from one twin to the other. Eyebrows, too, were sometimes disputed.
Neither twin answered. They were looking to the back of the house.
“Ear . . . neck . . . knee. . . . paw . . . toe . . . toenail.”
I was just getting to “back,” which always caused Scout's leg to jiggle with pleasure, when a low rumbling sound came from the dog.
I drew my hand back in alarm.
“He's growling at old man Tominski,” a Bella said. “He doesn't like old man Tominski, and we don't either.”
“I don't either,” I said quickly, even though this was the first time I had ever heard the name.
“He spies on us.”
“He wants to catch us, like that.” The Bella's small hands curled into claws.
“Yes, like that.”
Now the other Bella's hands formed identical weapons. With four hands reaching for me, I knew the first real fear of my life. I stepped back
“And let me tell you something,” she said, as if she were Aunt Pauline, who was always stern with us.
“What?”
“When Scout growls, you better run.”
“When Scout growls at somebody, there's something bad about that person.”
“Something really, really bad.”
I looked toward the barn, but there was no one there. “I don't see him,” I said.
“You never see him, but he's there.”
“Yes, he's there and he sees you!”
“But he's all gone,” I said, hoping it was true.
“For now,” the Bellas said in unison. They often spoke the same thought at the same time, as if their minds were connected.
Although I had not seen Mr. Tominskiâand would not actually see him for several yearsâmy dread of him had begun.

The Mule on the Minaret by Alec Waugh
Liberate Yourself (The Desires Unlocked Trilogy Part One) by Blake, Evie
Sebastian: The Complete Series by Nicole Colville
Redneck Romeo (Rough Riders) by James, Lorelei
Christmas Brides (Three Regency Novellas) by Bolen, Cheryl
The Harp of Aleth by Kira Morgana
Declan by Kate Allenton
Odd Hours by Dean Koontz
Sparrow Rock by Nate Kenyon
Phantoms in the Brain: Probing the Mysteries of the Human Mind by V. S. Ramachandran, Sandra Blakeslee
Our partner