Read Keeping the World Away Online

Keeping the World Away 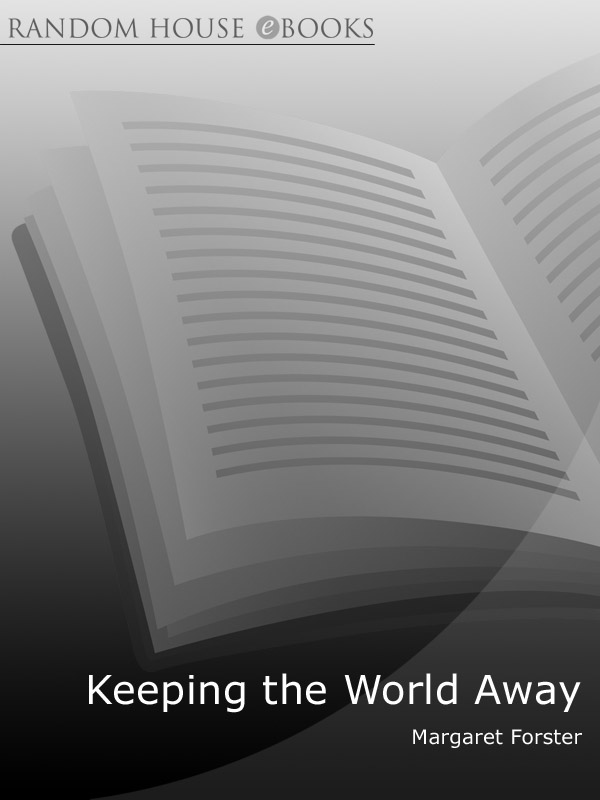 Lost, found, stolen, strayed, sold, fought over … This engrossing, beautifully crafted novel follows the fictional adventures, over a hundred years, of an early 20th-century painting and the women whose lives it touches.

It opens with bold, passionate Gwen, struggling to be an artist, leaving for Paris where she becomes Rodin’s lover and paints a small, intimate picture of a quiet corner of her attic room … Then there’s Charlotte, a dreamy intellectual Edwardian girl, and Stella, Lucasta, Ailsa and finally young Gillian, who share an unspoken desire to have for themselves a tranquil golden place like that in the painting.

Quintessential Forster, this is a novel about women’s lives, about what it means and what it costs to be both a woman and an artist, and an unusual, compelling look at a beautiful painting and its imagined afterlife.

Born in Carlisle, Margaret Forster is the author of many successful novels – including
Lady’s Maid
,
Have the Men had Enough?
,
The Memory Box
,
Diary of an Ordinary Woman
, and most recently
Is There Anything You Want?
– as well as best-selling memoirs, and biographies of Elizabeth Barrett Browning and Daphne du Maurier. She is married to the writer and journalist Hunter Davies and lives in London and the Lake District.

The Travels of Maudie Tipstaff

Miss Owen-Owen is At Home

The Seduction of Mrs Pendlebury

The Bride of Lowther Fell

Have the Men Had Enough?

The Battle for Christabel

Diary of an Ordinary Woman

Is There Anything You Want?

The Rash Adventurer: The Rise and Fall of Charles Edward Stuart

FOR MY DAUGHTER-IN-LAW ROSA MAGGIORA

‘Rules to Keep the World away: Do not listen to people (more than is necessary); Do not look at people (ditto); Have as little intercourse with people as possible; When you come into contact with people, talk as little as possible …’

‘As to being happy, you know, don’t you, that when a picture is done, whatever it is, it might as well not be as far as the artist is concerned – and in all the time he has taken to do it, it has only given him a few seconds pleasure … People are like shadows to me and I am like a shadow.’

THE COACH, CAUGHT
in the heavy traffic along the embankment, barely moved. Plenty of time to look out of the window, plenty of time to daydream. Gillian could see Westminster Bridge coming up, but it didn’t seem touched by any of the majesty that Wordsworth saw there, according to the sonnet they’d been reading in class the day before. Big Ben was satisfyingly impressive, though. She enjoyed the chance, as the coach crawled along, really to look at these landmarks, and at the same time she was trying to frame what she saw, to separate the images and make pictures of them in her mind.

Nobody else in the coach appeared to be looking at anything. They were having a party, the other girls laughing and shouting, and two of them dancing in the aisle, in spite of Miss Leach’s order to sit down and behave. Everyone was excited about being in London, and the art exhibition they were going to seemed just an excuse. Plans to sneak off to Oxford Street during the lunch break were well under way – Miss Leach was easily fooled. Gillian felt sorry for the poor woman. She was a good teacher but otherwise hopeless, with her straggly hair and nervous twitches and desperate desire to be liked. All the way here she’d been bleating for silence, her thin face tight with apprehension, flushed with indignation that no one showed her the slightest respect.

Eventually, the coach stopped outside the Tate Gallery and a spontaneous cheer went up. Miss Leach stood up and clapped her hands, shouting for them all to be quiet. Immediately, the girls at the back clapped back and stamped their feet, but then, sensing their teacher near to tears – they were not cruel girls, just high-spirited today – they calmed down. Miss Leach told
them
to get off quickly, because the coach had to go off to park, and not to forget to take all their belongings with them. Gillian was first off the coach. She waited while the others tumbled out, with their jackets and backpacks and carrier bags and the bottles of mineral water everyone had to have at the moment. Her own friends weren’t among this group – they didn’t do A-level art – so she felt a little apart. It made her sympathetic to Miss Leach, who was leading the way up the steps and through the doors into the gallery, where she stood in the lobby, her finger to her lips, looking ridiculous and being ignored. The giggling and chatting created such a hubbub that Gillian could tell their teacher would never impose order, so she decided to act herself. Standing with her back to Miss Leach, she put her fingers in her mouth and gave a sharp, short whistle. There was suddenly a shocked silence, and then a burst of laughter, and when Gillian turned to her teacher and said, ‘Shall we go, Miss Leach?’ everyone fell into line, perfectly obedient.

In the exhibition itself, the girls’ behaviour was exemplary. A little whispering among themselves, but that was all. They moved from painting to painting in groups of three and four, dutifully consulting the notes Miss Leach had given them as they went. Gillian had read them on the bus. She found, looking at the paintings, that they seemed irrelevant. Did she need to know where the artist was born, or trained? All that mattered now, surely, were the paintings themselves and what she could see in them. The artist’s intention didn’t matter, did it? If a painting didn’t speak for itself, what use was it? She was convinced that art should be looked at in a
pure
way, uninfluenced by any knowledge either of the artist or the circumstances in which it had been painted.

But then, in front of one painting in particular, she began to have her doubts. She stared and stared at it, becoming more and more puzzled, and also, in an odd way, disturbed. Something was there which she couldn’t quite grasp. The effort to understand made her feel agitated, and she found herself biting her lip so hard it began to hurt. She lingered so long that Miss Leach came
to
see why she was not in the second room yet, and she moved on hurriedly, afraid she would be asked to explain. She took care, after that, not to separate herself. They spent over an hour at the exhibition and then the coach picked them up and took them to Hyde Park for their picnic lunch. Gillian wandered off, to sit on a bench in front of the Serpentine, in peace. She felt light-headed, the painting which had intrigued her flashing over and over before her eyes until she felt dizzy. After she’d finished eating her sandwiches, she opened her notebook, and sat with pencil hovering over the blank page. A new thought had occurred to her, but she wrote nothing. Her mind was full of simple but unanswerable questions.

Miss Leach was approaching, a silly, hesitant smile on her face. Hastily, Gillian closed the notebook, and braced herself. She knew she was one of Miss Leach’s favourites. She knew, too, that she ought to be grateful to her – at the last parents’ meeting the teacher had defended her right to study art when her father said it was a waste of her abilities and that she ought instead to go to university. But Miss Leach was creepy, it took an effort to be polite and friendly. She couldn’t stop the woman from sitting down beside her, though. ‘Well, Gillian,’ she said, ‘wasn’t it wonderful, to see all those paintings brought together, almost a lifetime’s work?’ Gillian nodded. ‘And what did you think of them, dear? I know you’ll tell me in due course, in your essay, but in general, what was your impression? I’m curious.’

Gillian surprised herself. She realised what had been bothering her. ‘I thought about their lives,’ she said, looking down at the water to avoid seeing her teacher’s face. ‘Whose life?’ Miss Leach said. ‘His, or hers?’ ‘Neither,’ Gillian said, beginning to feel embarrassed. ‘I meant
their
lives, the lives of the actual paintings, especially one of hers. I was wondering where it had been, who had owned it, who had looked at it. And other things – I mean, what effect did it have on the people who have looked at it? What has it meant to them,
how
have they looked at it, did they feel the same as I did, did they see what I saw, and …’ Her voice tailed off.

Miss Leach was silent for several moments and then, in a voice quite unlike her usual plaintive tone, said that where paintings had been since they left an artist’s hand was of no consequence whatsoever. A painting took its chance. It was as simple as that.

But Gillian thought that somehow it was of consequence.

THE WIND PUSHED
and forced them along, great savage gusts of it, stinging their ears, penetrating their scarves, whipping their uncovered hair into fierce tangles, slicing through their coats and chilling their small bodies so completely they were crying and gasping for breath before ever they reached the steps. Gwen fell. She tried to take the steps two at a time but the wind unbalanced her and she tripped, clutching in vain at the iron handrail. Thornton hauled her up, half dragging her to the door where Winifred, lifted up there by Gus, already cowered. Gus had set her down, and stood with his back to the door, his eyes closed, his arms spread wide to welcome the wind, and a smile on his face.

All four of them, gathered together at last, hammered on the big solid door, thumping it with their fists, rattling the letter-box and yelling to be let in. The door swung violently back, the weight of the wood for once unequal to the powerful thrust of the gale force wind. Closing it, as soon as they were safely inside the hall, took their combined strength. Eluned had not stayed to help. The children collapsed on the tiled floor, pulling at their outdoor garments, removing their boots, which were still thickly caked with mud and under no circumstances to be worn in the rest of the house. Winifred lined the boots up, taking pleasure in the task. On stockinged feet, they pattered down the stairs into the kitchen, eager for the hot milk awaiting them. Thornton and Gus drank greedily, and even Winifred sipped hers quickly. Gwen held her mug tightly, wanting its outer warmth on her hands, but not its contents. One mouthful was enough. The rest she would give to the cat, taking care that Eluned (who would report this to her father) did not see.

A New Beginning by Michael Phillips
Noche Eterna by Agatha Christie
A Forbidden Love by Lorelei Moone
Ever After by McBride, Heather
All the Beautiful Brides by Rita Herron
The Real MacAw by Donna Andrews
Undercover by Gerard Brennan
Cripple Creek by James Sallis
Ratha and Thistle-Chaser (The Third Book of the Named) by Clare Bell
Lost Republic by Paul B. Thompson
Our partner