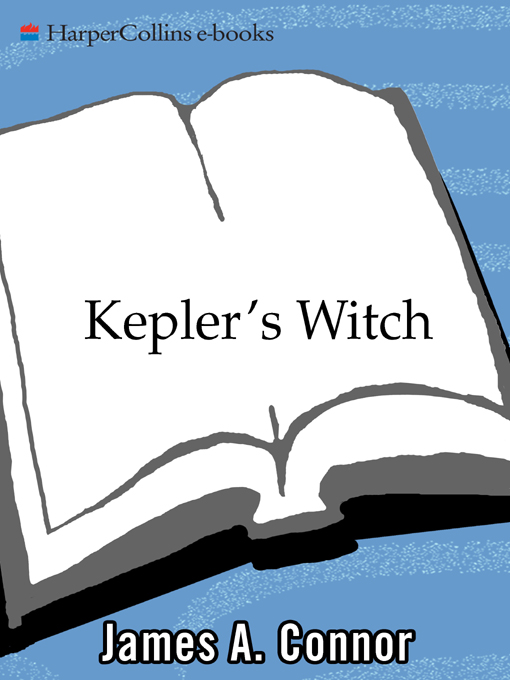 An Astronomer's Discovery of Cosmic Order Amid Religious War, Political Intrigue, and the Heresy Trial of His Mother

Truthfully I may confess
that as often as I contemplate
the proper order, as one results from another
and becomes diminished,
it is as if
I have read a heavenly passage
not written in meaningful letters
but with the essential things in this world
which tells me: Put your reason herein
to comprehend these things.

Introduction: So Why Kepler?

Letter from Kepler to the Senate of Leonberg, January 1, 1616

Where Kepler's mother, Katharina, is accused of witchcraft by a former friend, which the gossip of the townspeople whips into a fury against her.

Where Kepler is born in Weil der Stadt, near Leonberg, including a description of the town, the Kepler family, and Johannes's early childhood.

Kepler's Horoscope for Himself, November 1597

Where Kepler receives his education as a scholarship student under the care of the Duke of WÃ¼rttemberg.

Where Kepler enters TÃ¼bingen University and prepares for his calling as a priest of the Book of Nature.

Letter from Kepler to the Theology Faculty at TÃ¼bingen, February 28, 1594

V Â Â Â In Many Respects So Honorable

Where a position as a mathematics teacher opens at the Lutheran school in Graz, and Kepler takes the position with some fear.

Where Kepler publishes the Mysterium Cosmographicum, and in the following year marries Barbara MÃ¼ller von MÃ¼hleck, a widow twice over with one daughter, which marriage is complicated.

Where the Lutheran community of Graz is persecuted, then banished, and where Kepler, who must choose between his faith and his position, is finally banished with them.

Where Kepler takes employment with Tycho Brahe and moves his entire family to Prague.

Where Kepler writes the Astronomia Nova in Prague, a city full of magic and political intrigue.

Where Kepler's marriage is troubled, Rudolf II dies, and the Counter-Reformation comes to Prague in force.

Letter from Kepler to an Unknown Nobleman October 23, 1613

Where Kepler, after moving to Linz, Austria, must come forth to defend his mother on charges of witchcraft.

Letter from Luther Einhorn, Magistrate of Leonberg, to the Duke of WÃ¼rttemberg, October 22, 1616

XII Â Â Â If One Practices the Fiend's Trade

Where Katharina's trial begins, and she is horribly mistreated, and where Johannes must leave the emperor's service for a time to come to her aid.

Where the Thirty Years' War begins with the Second Defenestration of Prague, and where Katharina Kepler is tried and convicted of witchcraft.

XIV Â Â Â To Examine the Secrets of Nature

Where Kepler writes his Harmony of the World as the Thirty Years' War heats up, and where he is finally chased out of Linz, his home for fourteen years.

Where Kepler seeks a home for his last few years after fleeing Linz, argues with the Jesuits, finds patronage with Wallenstein, and dies in Regensburg

J
OHANNES
K
EPLER
is most often remembered for his venerable three laws of planetary motion, for which he has earned the title “the father of celestial mechanics.” But Kepler's accomplishments were wide-ranging. In addition to acclaim for his laws of planetary motion, he is also considered the founder of modern optics. He was the first to investigate the formation of pictures with a pinhole camera, the first to explain the process of vision by refraction within the eye, the first to formulate eyeglass designs for nearsightedness and farsightedness, and the first to explain the use of both eyes for depth perception, all of which he described in his book
Astronomiae Pars Optica
. In his book
Dioptrice
(a term coined by Kepler and still used today), he was the first to describe real, virtual, upright, and inverted images and magnification (and he created all those ray diagrams commonly used in today's optics textbooks), the first to explain the principles of how a telescope works, and the first to discover and describe the properties of total internal reflection. Galileo may have used the telescope that Johann Lippershey had invented to discover the moons of Jupiter and to see the first hints of Saturn's rings, but it was Kepler who explained how the telescope works.

Today when we think about scientists, we have images of university professors in ivy-covered halls, laboratories full of elaborate instruments, cadres of graduate students, laptop computers more powerful than all
those used to send men to the moon, and large government grants. Yet with all of these resources, how much of today's research will stand the test of time the way the works of Kepler have? Much has changed in four hundred years, but Kepler's laws are as exact now as they were then. How was he able to accomplish so much? Actually, given the times he lived in and the meager resources, how was he able to accomplish anything?

Context is the window to understanding. To understand Kepler and his accomplishments, one needs to understand the times in which he livedâthe culture, people, places, politics, religion, and his family. Wars, witch hunts, pestilences, and death were common everyday occurrences. The potions that people used as cures were a far cry from today's medical miracle drugs.
Kepler's Witch
communicates a feeling for the hardships, difficulties, rejections, loneliness, and heartbreak that Kepler endured. He lived on the verge of poverty. His salary was almost always in arrears. His only resources were paper, pen, and one man's treasure trove of astronomical observations.

What drove Kepler? What sustained him? How could he endure? It certainly wasn't the money or even glory. He had few peers who even recognized his accomplishments. In
Kepler's Witch
readers get a feeling for the source of his strength, his vision, and his perseverance, how he was able to do so much with so little in spite of all the evils that surrounded him in life. Kepler believed in an almighty God, the creator of heaven and earth. He believed in Jesus Christ as personal Savior. He believed in the ideal of the holy catholic (universal) church. Kepler was a man of peace in search of harmonyâin particular, the harmony of the heavens. Somehow he knew it was there, even if life on earth was far from harmonious.

*
The Kepler Mission is a special NASA space mission for detecting terrestrial planetsâthat is, rocky, earth-sized planetsâaround other stars. It is scheduled for launch in 2006.

A
BOOK
like this one is a river, drawing from many sources. I owe thanks to each one and will name them, in no particular order except as they come to mind. First, great thanks to Petra Sabin Jung, who helped with the difficult task of translating Kepler's German into modern English. Also, thanks to all my friends in Weil der Stadt: Dr. Manfred Fischer, the president of the
Kepler Gesellschaft;
Dr. Ernst KÃ¼hn, my sherpa guide up the steep slopes of TÃ¼bingen; Hubert and Elisabeth Bitzel, who were so kind and joined in my search for a Kepler sundae; Herr Bitzel, Hubert's brother, the curator of the Kepler Museum, and a great Kepler fan; Dr. Wolfgang SchÃ¼tz, the curator of the Weil der Stadt city museum, the town historian, and a wonderful source of information. Also, thanks to all the shopkeepers in the
Marktplatz
of Weil, who gave me samples. Thanks also to Anna Madsen and her father, Dr. Madsen, a Lutheran minister from Wisconsin. I met them both in Regensburg, and we had a wonderful little “Americans in exile” moment in the foyer of the Kepler Museum. Thanks to the people at the Sweet Home Hotel in Prague, who helped me get things mailed.

Thanks also to my agent, Giles Anderson, of the Anderson Literary Agency; to my editors, Steve Hanselman and Mickey Maudlin, at Harper San Francisco; and to my publicist, Roger Freetâthree men who made the Big Decisions. And thanks to Cindy DiTiberio, also of Harper San Francisco, who made all the other decisions. Thanks also to David Koch, Michael Gurian, Charles de Fanti and Leni Fuhrman, Malachy McCourt, John Anthony Connor, Margarette Alma Connor, William Craven, Sr., the New York Mets (for teaching me humility), and, of course, my wife, Beth Craven Connor, for teaching me everything else.