Kidnapped and a Daring Escape 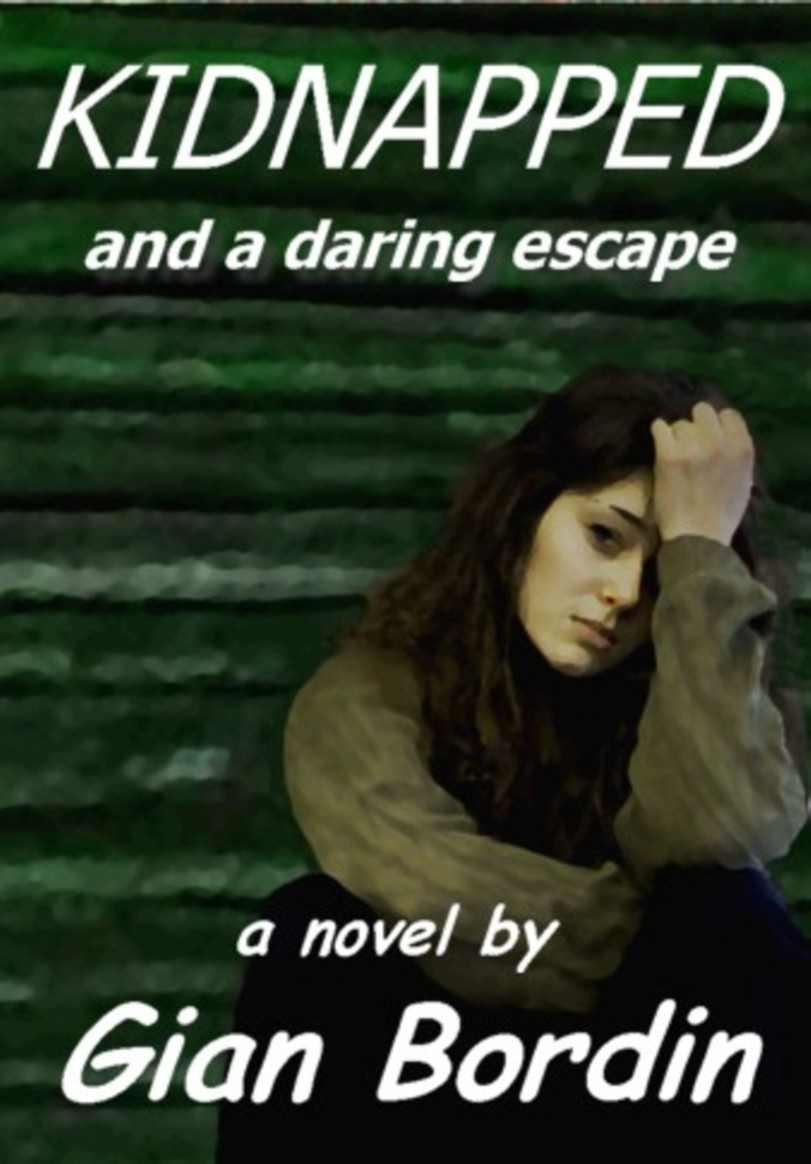 While visiting a shady bar in Popayàn, Columbia, André, an investigative journalist, overhears fragments of a conversation about a planned kidnapping of a wealthy woman. Did he hear correctly that the female hostage is to be killed after payment of the ransom? Why? Next day, he joins Bianca, an Italian student, on an archeology excursion to San Agustin. She charms him with her vitality, and he falls for her. While being driven by Jeep between two sites, masked men take them hostage and march them into the Cordillera high country.

The situation seems to fit the kidnap plot he overheard. Has he become its unintended victim? He guesses that whoever is behind the kidnapping knew Bianca’s itinerary to minute detail, and he does not like its ominous implications. How can he escape, snatch Bianca from their captors, and then thwart any attempts to being recaptured? But if he expected that success would mean the end of the ordeal, he is sadly mistaken when, on their return to Rome, he is arrested and accused of having faked the kidnapping and rescue in order to publish an heroic news story. An action-packed tale, full of unexpected twists and daring exploits.

André Villier pushes through the bead curtain into the Alcazar Bar. He
muses that this is a rather incongruous name for the shady pub in the
rundown northern suburb of Colombia’s
Ciudad Blan
ca — the white
city, a name it got for its colonial center of whitewashed buildings. Its
citizens praise that its splendor is second only to Cartagena.

Four bare 40-watt bulbs hang over the bar on short wires. Their light
does not reach the far corners of the pub. Like the arms of a giant, a tired
ceiling fan swirls the smoke in sinuous patterns. Occasional boisterous
shouts and laughter punctuate the indistinct rumble of voices. Throngs
of males jostle for space in front of the bar.

Pausing just inside the entrance, André scans the scene, trying to
penetrate the smoky gloom to the far end of the room. He spies several
alcoves. That’s where his intermediary in Medellin directed him to go.
Slowly, he pushes through the crowd, steering to an empty one.

He has dressed down, wearing faded jeans and a crumpled-up open-neck shirt. However, he has no illusions that he won’t immediately be
tagged as a gringo, his blond hair, blue eyes and white skin, hardly
touched yet by the equatorial sun, a clear giveaway. In fact, a number of
eyes briefly stray on him, several following his slow progress toward the
back.
How will I ever find my contact?
he wonders Or, rather, how will
he find me?

Although André ticked ‘tourist’ on the immigration entry card when
he entered Colombia in January 2008, in truth he is in the country on an
assignment as an investigative journalist. His real purpose is to get an
interview with one of the top people in FARC. It is by far his most
dangerous assignment ever. FARC stands for
Fuerzas Armadas Revolucionarios de Colombia,
the left-wing guerilla group who for half a
century has been fighting successive Colombian governments, as well as
the
autodefensas
, the local self-defense vigilantes, and the
paras
, the
right-wing paramilitary groups. The latter were set up and financed by the
drug cartels of Medellin and Cali and tacitly supported by Colombia’s
armed forces. Their proclaimed purpose of clearing areas of communists
was largely a front for their drug trade and for bringing the population in
line to protect the interests of large-scale landowners and drug barons.
Kidnapping and assassination became the preferred tools for both sides.
In the last two decades of the 20
th
century they ran into the thousands
each year. Nobody was safe. The
paras
targeted left-wing leaders and
local and regional officials who were suspected sympathizers of the left,
as well as journalists, TV personalities, civil rights activists, and high-ranking government employees, while FARC went mainly after wealthy
business people, both local and foreign, and politicians — the 2002
kidnapping of Ingrid Betancourt, a presidential candidate, is the most
notorious case.

In recent years, with the partial disbanding of paramilitary groups and
a greater control of the army over a larger portion of Colombia, things
have quieted down in many areas. However, FARC has retained control
over the vast Amazon jungle region in the southeast of the country.
André read recent reports that the various factions of FARC are still
holding some 700 people. They also seem to have abandoned their
original socialist aims and reverted more and more into a terrorist
organization, largely financed through their own drug trade.

Ransoms demands regularly run into several million US dollars. The
only foreigners exempt from kidnapping for ransom, but not political
kidnapping, are US citizens, since the US Government immediately
freezes the assets of any kidnapped Americans, thereby blocking any
ransom payout. Since the 1980s Colombia has been and still is without
doubt one of the most dangerous countries in the western hemisphere.

André realizes that he has to tread cautiously. Being Swiss clearly tags
him as rich, and being a journalist in addition, he can easily end up as a
target for both FARC and criminal gangs of
ex-paras
.

So here he is, in the Alcazar Bar, with the help of political contacts in
Spain and France and the vague promises of an intermediary in Medellin
who agreed to facilitate a preliminary meeting with a FARC representative in Popayàn. Presumably, the latter will arrange for André to meet up
with a top-ranking FARC leader in the southern provinces of Caqueta or
Putumayo.

He squeezes himself into the grimy bench of the empty alcove, making
sure to keep an unobstructed view of the entrance. Beckoning a passing
waiter, he orders a beer. He would prefer wine, but does not wish to risk
getting another liquid more vinegar than wine as in Medellin when he
met up with the intermediary.

With one eye always on the entrance, he watches the heated exchanges
of drinkers near the bar, their gestures and facial expressions underscoring their words. The threesome standing at the near end of the bar talk
soccer. He can only make out the occasional word. Two olive-skinned
men, probably in their early twenties, sit on high bar stools next to them.
They exchange an occasional knowing grin, but no words. André
becomes aware that their glances often come to rest on him. Could they
be his contacts? He observes them more closely. No, he decides. They
look too soft, sporting rings on each hand. One wears his short hair
spiked. The mistake makes him smile. Another mistake. One of the guys
nods to the other and ambles over to his table.

"Ah, I am friend of Americans," he says in a heavily accented English
as he sits down uninvited. "I can lead you place; lots of fun, you know?"
His hands shape ample curves. "You like big tits? Great ass? Very fresh,
very young. Only sixteen, I swear. Near here."

André replies in Spanish: "Sorry,
señor
, I am waiting for friends."

The guy also switches to Spanish. "You look new in town. Come, I’ll
show you quickly. She lives just across the street. You’ll not regret it."
He is gesticulating.

André notices that his right hand strays several times over his glass of
beer.
Is it accidental or intentional?
he wonders. Has the guy dropped
something into his drink? Before undertaking the trip, he informed
himself of all the possible security risks, particularly the treacherous,
tasteless drug Burundanga favored by thieves. A small dose of the
powder in his drink and it would reduce him into a willing slave who
hands over his wallet and discloses his credit card pin number without
resistance. A large dose would render him unconscious almost instantly.
It can even kill. He was warned to watch his drinks and food, never leave
them unattended, and never accept a drink, or even chewing gum, sweets,
or cigarettes from a stranger, particularly one who is friendly or offers
help. Maybe that is a bit paranoid, he figures, but it is better to be safe
than sorry.

André shakes his head. "Sorry again, but my friends will be here any
minute."

"Come,
amigo
, Friday night traffic is terrible. They are bound to be
late by half-an hour. More than enough time to have quick fun. You
won’t get young flesh like this anywhere else for such little money. I take
dollars. Come, drink up. It’s just next door."

So my suspicion is correct, André reckons. He wants me to down the
drink. "
Señor
, I said no and I mean it. Please, leave me alone."

"You’re making a big mistake. You’ll regret it." He shrugs his
shoulder, and then tilts the head a bit, producing a false smile. "But
maybe you come back tomorrow night, when you have more time, right?
And I’ll show you." He returns to his companion, briefly obscuring
André’s view toward the entrance.

A newcomer stands inside the curtain, his face partially shaded under
a black felt hat. In his left he holds a maroon lady’s handbag. His build
is squat but not fat, exuding strength. His torso hardly fits into the brown
shirt he is wearing and his solid thighs stretch the material of his jeans to
the limit. He wears scuffed working boots. André immediately nicknames him ‘
le trapu
’ — French for ‘the squat one’. Tagging people with
a telling label is a habit he picked up from his father already as a child.
His father always gave fitting nicknames to every person he met. André
guesses the man to be in his late thirties. His eyes roam over the patrons
like somebody experienced in spotting danger and then come to rest on
André.

My contact, flashes through his mind. He experiences a stomach
flutter. Careful now, he reminds himself, play it right. Success or failure
will depend on it.

After a moment’s hesitation, the man weaves through the crowd
around the bar, aiming for the alcoves at the back. As he approaches,
André rises and offers him a forced smile. For a split second, the man
responds, puzzled, but then looks away and enters the adjacent alcove.

Bewildered, André is on the verge of calling out to him. He only
desists when he hears the familiar greeting of two people who know each
other. ‘
Le trapu
’ isn’t my contact, he concludes disappointed, and sinks
back onto the bench. His hand reaches for the beer, but before the glass
touches his lips he puts it down. Don’t become careless now, he
reprimands himself. He turns back to watching the entrance.

At the Queen's Command by Michael A. Stackpole
The Lieutenant's Promise by Aileen Fish
The Slave by Laura Antoniou
Barefoot at Moonrise (Barefoot Bay Timeless Book 2) by Roxanne St. Claire
The Lullaby Sky by Carolyn Brown
Nine for the Devil by Mary Reed, Eric Mayer
Mrs De Winter by Susan Hill
You're a Horrible Person, But I Like You: The Believer Book of Advice by The Believer
Tristana by Benito Perez Galdos
Rich Bitch: Everything's Going to the Dogs by Nancy Warren
Our partner