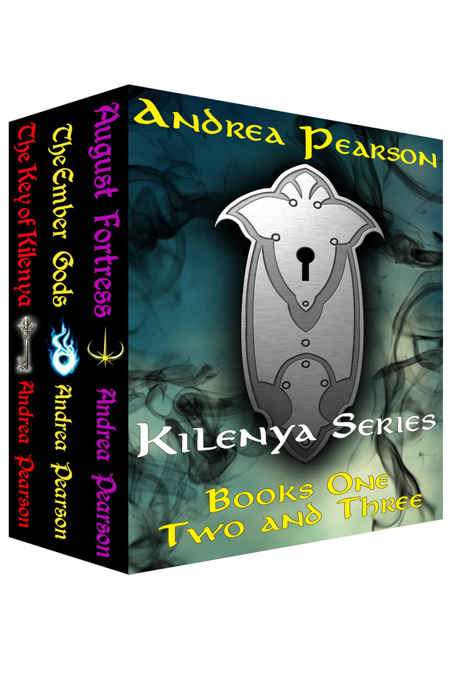 Chapter 1. Into the Woods

Chapter 3. The Key of Kilenya

Chapter 7. A Bucket Full of Nuts

Chapter 5. Such a Sweet Pea

Chapter 1. Attack of the Indians!

Chapter 5. Midian of the North

The Key of Kilenya: Special Edition with Illustrations

Grail Bestiary Volume I: Creatures of Grail and Kilenya

Praxis Bundle One: The Focus, The Manor, The Angel

For information on the above books, click
here
. (http://www.andreapearsonbooks.com/p/my-books.html)

This ebook is licensed for your personal enjoyment only. This ebook may not be re-sold or given away to other people. If you would like to share this book with another person, please purchase an additional copy for each recipient. If you’re reading this book and did not purchase it, or it was not purchased for your use only, then please return it and purchase your own copy. Thank you for respecting the hard work of this author.

This is a work of fiction, and the views expressed herein are the sole responsibility of the author. Likewise, characters, places, and incidents are either the product of the author’s imagination or are represented fictitiously, and any resemblance to actual persons, living or dead, or actual events or locales, is entirely coincidental.

Summary
: We all have a choice—but we can’t choose the consequences.

Jacob Clark is chased down a path that takes him to another world—a world where he is a wanted young man. The Lorkon want to control him and the special powers he possesses. The people of the new world want him to save them from the destruction of the Lorkon. All Jacob wants is to go home, but even that choice has consequences. If he waits too long to decide, the new world and the one he came from will be destroyed.

As Jacob looks for people he can trust, he finds himself in the center of a fight for freedom—both for himself and the people he’s come to know. And when he meets a pretty girl named Aloren, everything he understands about his role on Eklaron is challenged.

Jacob has no idea where the path he chooses will take him, but once the choice has been made—bring on the consequences.

This story was, is,

and always will be

For those difficult to say names and words

Chapter 1. Into the Woods

Would a man kidnap his own daughter-in-law? The castle is in ruins, its people bloodied and broken. I suspect my father was behind it. We are trying to count how many are dead and missing, and I’m in despair because I can’t find her anywhere. My beloved Princess Arien, eight months’ pregnant with our first child—and such a difficult child to come by, after years of trial and loss.

Aldo and Ezra have instructed me to meet them at their mother’s cottage, nearly a mile from the castle. They believe the princess was indeed kidnapped, and that her captors will demand ransom. What else would they want from the royal family?

Jacob tossed his favorite hand-held video game onto his bed, then grabbed his basketball and dashed down the stairs. As he entered the kitchen, he paused, glancing out the window to check on Amberly—still playing in the sandbox out back—and turned and bolted through the front door, eager to take advantage of the last rays of sunlight.

Matt, Jacob’s sixteen-year-old brother, was working in the garage. “Hey, I wanna shoot too,” he said as he popped his head out from under the truck.

“Fine, but I really need this practice. So challenge me.”

“Don’t I always?” Matt said with a laugh.

They played a quick game of one-on-one, with Jacob barreling past Matt and leading the game consistently by fifteen points or more. He ended it with a spectacular three-point shot and bent over panting, hands on knees.

“Yeah, well, I can still beat you at football.” Matt grinned.

Jacob laughed, then tossed the ball to his brother. “Here. You need to practice more.”

“You still trying out tomorrow?”

“Uh-huh.” Matt tucked the ball under his arm and glanced at Jacob. “You know . . . letting Kevin win at something might not be a bad thing. ‘Sides, you could both make it.”

“No, we couldn’t. You know Coach—he’s not going to let two fourteen year olds on varsity.”

A rustle in the trees next to the driveway made Jacob turn his head. It sounded like a large animal or a person. “You hear that?”

“Hear what?” Matt was back to shooting hoops again.

Jacob motioned for Matt to stop and took a step closer to the trees, squinting to see better. But the sun had already set, and the brush was dark. “Hey, turn on the light. I think something’s in there.”

Matt’s footsteps faded, then light flooded across the concrete driveway, deepening the already ominous shadows in the forest. That wasn’t much better.

Matt came back and stood next to him for a moment. “Nothing’s there, man.” He dropped the ball at Jacob’s feet. “I’m gonna go work on the truck some more.”

Still unsure, Jacob slowly picked up the ball and started shooting again. After several satisfying
swishes
, he forgot the sound in the trees, picturing himself on the court at Mountain Crest High School, playing in front of Coach and the varsity team. He had to make it. He just
had
to. He’d never live down Kevin’s teasing and Coach’s patronizing glances of pity if he didn’t.

Thirty minutes later, he dropped the ball, caught it with his foot, and pushed it up the driveway, watching it roll toward the open garage door. It bounced off the truck’s tire closest to Matt. Jacob was ready for tomorrow. He could do this—he really could. He just had to make sure he got plenty of sleep that night and warmed up before tryouts began.

“Matt,” he called into the garage, “we need to get Amberly inside and to bed.”

A grunt came from under the truck. Jacob pushed the hair off his forehead and wondered what his mom would say if he bleached the tips while she was gone.

Leaves rustled in the forest again, a twig snapped, and he glanced to the right. A large form shifted in the moonlight, then froze. Light flashed across a pair of eyes almost level with his. He’d been right—something was there! The form moved again. It was too bulky to be human. Jacob stepped back, fumbling for his pocketknife. Nothing that big lived in this part of the mountains.

A scream raked the air—Amberly!—and he nearly fell over, stumbling away from whatever it was that had been watching him from the forest.

“What’s going on?” Matt asked, scrambling out of the garage.

They raced around the garage and jerked to a stop as they spotted the sandbox, lit by the back porch light. A monstrous black wolf towered over Amberly as she sobbed, with her shoulders hunched and hand held up as if to shield herself. It sniffed her hair and clothes, then growled at Matt and Jacob. Footfalls sounded behind them and they whirled—another huge wolf lurked at the forest edge.

“What do we do?” Jacob asked under his breath.

At the sound of his whisper, both wolves bared their teeth. The one closest to Amberly lifted its nose, then took several steps toward the boys. Jacob almost stopped breathing as he waited to see what it would do. Intelligent green eyes locked with his. He tried to look away, but couldn’t. Neither wolf paid attention to Matt as he edged closer to Amberly. Jacob wondered if he should follow, but something about the wolves’ behavior made him decide to stay in place.

The gentle August breeze ruffled his hair. Both animals sniffed the air, then stiffened. The one closest to Amberly snarled and took a few steps in Jacob’s direction. Suddenly, to his horror, both of them lunged forward, pouncing straight for him.

Matt made a run for Amberly, while Jacob had a split-second decision to make—his only possible escape route was a tree house deep in the forest that bordered their property on most sides. A low fence separated the yard from the trees.